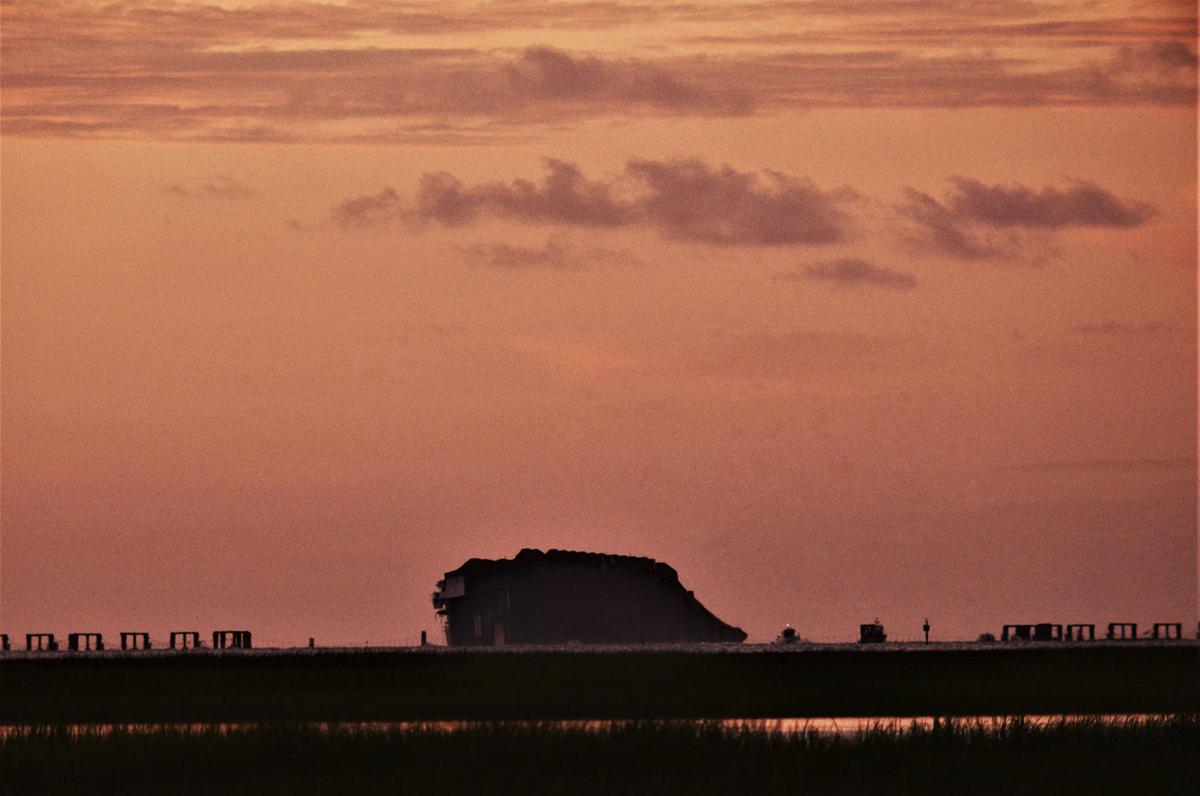 The Golden Ray sits in St. Simons Sound as the sun rises Monday, which was the first day of a public hearing designed to determine what happened. 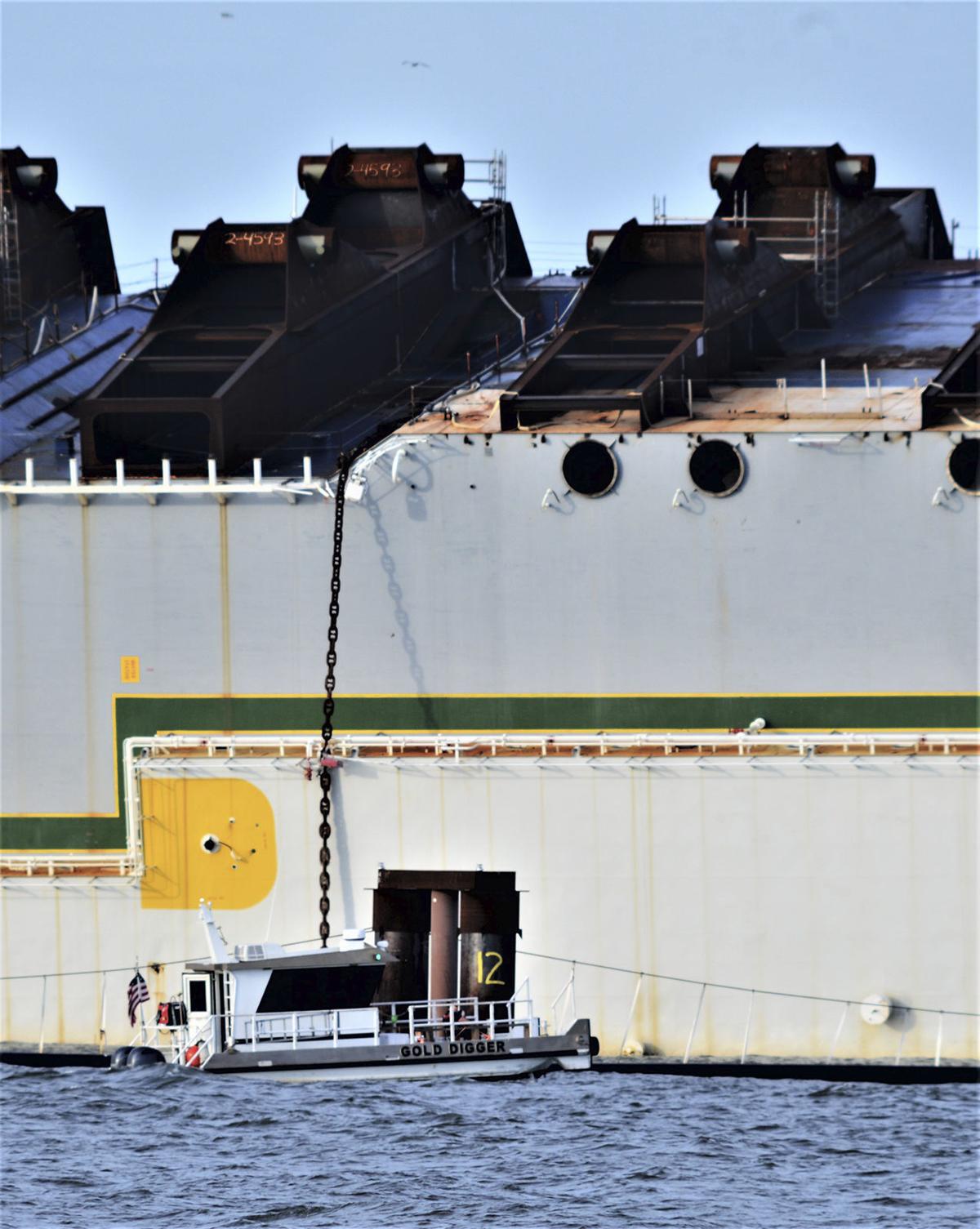 The Gold Digger, a work boat, motors past one of the huge chains in place on the Golden Ray.

The Golden Ray sits in St. Simons Sound as the sun rises Monday, which was the first day of a public hearing designed to determine what happened.

The Gold Digger, a work boat, motors past one of the huge chains in place on the Golden Ray.

Technical difficulties led to poor audio quality Monday and prompted an early closing to the first day of the federal hearing into last September’s capsizing of the freighter Golden Ray in the St. Simons Sound.

The hearing is being conducted primarily by the U.S. Coast Guard and the National Transportation Safety Board.

Fuzzy background noise and an inability to clearly hear those testifying frustrated the public and media. The proceedings are open to the public via an internet livestream broadcast.

The principal participants in the hearing met at the Marshes of Glynn Library in Brunswick, but all others were barred from the room due to COVID-19 pandemic precautions.

Sound issues hampered the livestream broadcast for those trying to follow the proceedings online almost from the start.

“This is sadly pointless to watch because we can’t hear anything,” Sylvia Spohn Murphy commented in the broadcast’s adjoining chat room.

“Still difficult to hear the witness,” wrote Jon Osgood, adding his lament to a host of others. “Any improvement would be greatly appreciated.”

After testimony from Port of Brunswick harbor pilot Bruce Fendig, which was mostly garbled for online listeners, officials decided shortly after 2 p.m. to postpone the remainder of the hearing to work on improving the sound quality.

The hearing will resume at 10:30 a.m. Tuesday, hopefully with better audio, said Coast Guardsman Jay Neiman, spokesman for the hearing. It is scheduled to continue daily through Friday, with the ship’s South Korean captain and the harbor pilot who was with him on the ship’s bridge slated to testify later this week.

The public can follow the proceedings at: https://livestream.com/USCGinvestigations. The public can submit questions and comments via email at: USCGGoldenRay@gmail.com.

From what could be heard Monday, Welborn and others involved spent much of the session confirming preliminary information. In addition to Welborn and Capt. David M. Flaherty of the NTSB, other participants included Thomas Bremer of the Marshall Islands Maritime Administrator, representing the Golden Ray’s flagship nation, and a Korean Maritime Tribunal representative.

The 656-foot-long Golden Ray capsized in the dark morning hours of Sept. 8 in the St. Simons Sound while heading out to sea with a cargo of 4,200 Hyundai and Kia vehicles. The incoming car carrier Emerald Ace scooted by the foundering Golden Ray and continued its journey to the Port of Brunswick.

Officials said at the time the Emerald Ray played no role in the ship’s fate.

The Golden Ray was constructed in South Korea in 2017. It passed port exams in February 2018 and May 2019, both times in San Francisco, the hearings revealed.

Its journeys leading up to the ship capsizing in the St. Simons Sound began Aug. 22 in Vera Cruz, Mexico, and included stops in Altamira, Mexico, Freeport, Bahamas, and Jacksonville, Fla., before arriving at the Port of Brunswick on Sept. 7.

All 23 members of the crew and the captain were properly certified, authorities said. There was no indication that the ship’s machinery or equipment caused or contributed to the roll-over..

After a lunch break, Fendig testified on the unique tidal currents in the sound, the intricacies of the shipping channel and the role of harbor pilots.

Fendig is one of five harbor pilots with the Brunswick Bar Pilots Association. The pilots are tasked with piloting merchant ships in and out of the Port of Brunswick.

The Golden Ray capsized just days after Hurricane Dorian passed offshore from Glynn County, delivering high winds, rough surf and heavy rains. Fendig said no damage to the shipping channel was detected after the passing of the storm.

“They checked all aids to navigation and none reported back damaged or off station,” he said.

The bottom of the channel also was clear afterward, he said.

After Dorian, 12 ships entered the port without incident before the Golden Ray’s arrival, he said. Investigators also asked Fendig about ship speeds in the channel and the currents’ effect on those speeds.

Asked about two ships encountering each other in the channel, Fendig estimated at least a gap of “one-and-a-half ship’s width” should be given between them.