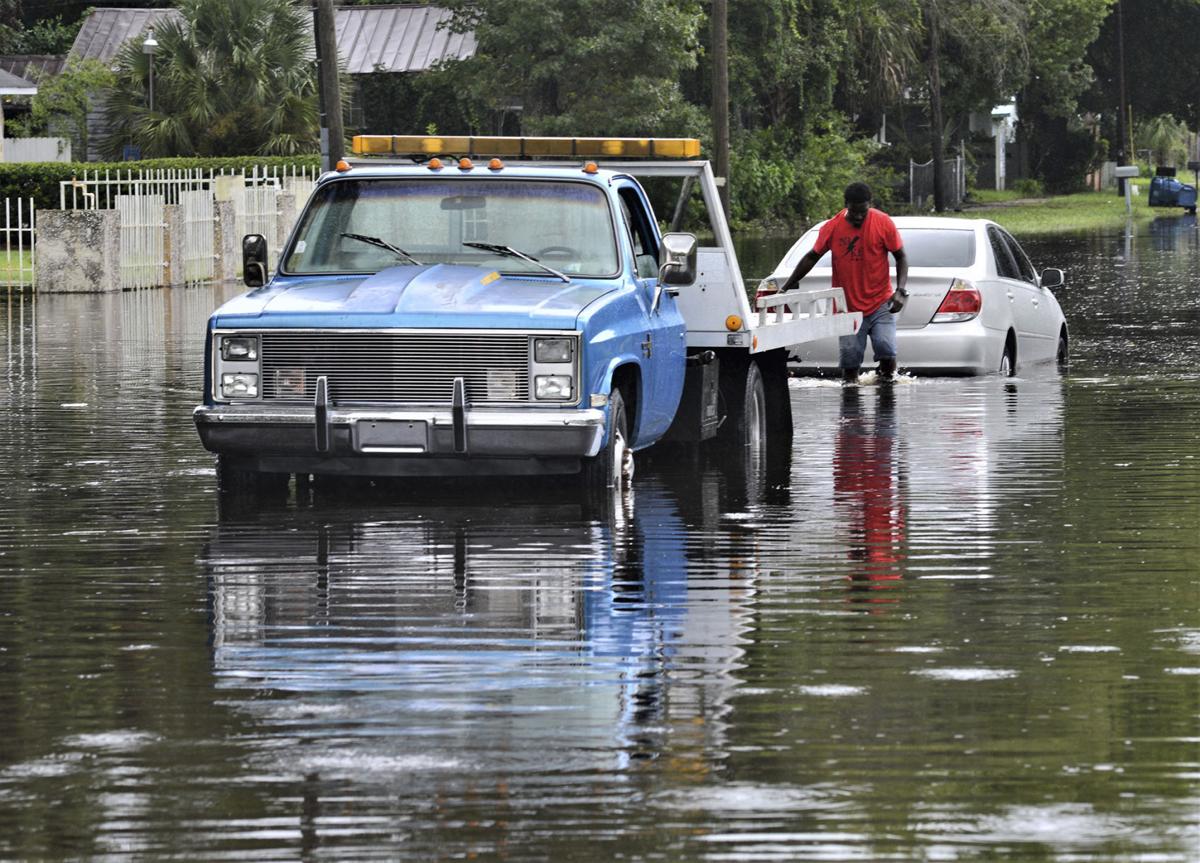 A tow truck driver hooks up a flooded car on Stonewall Street. 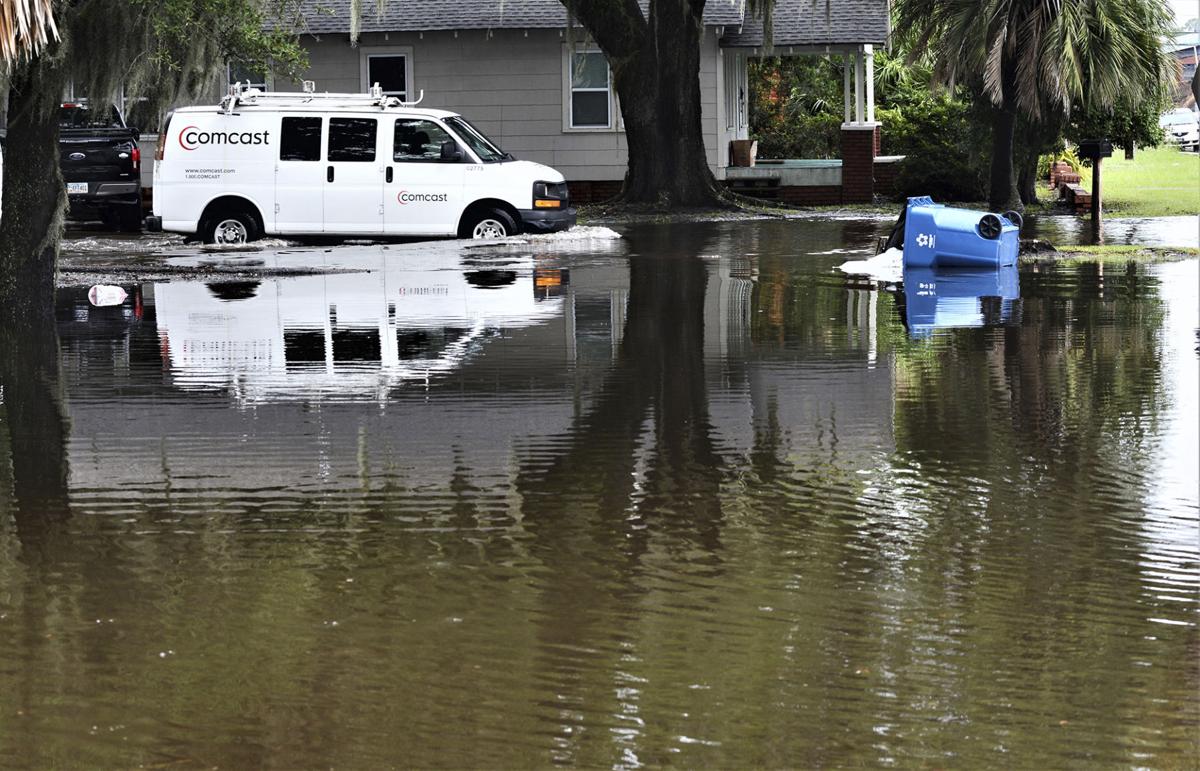 A Comcast vehicle goes past an overturned trash can on flooded Cook Street. 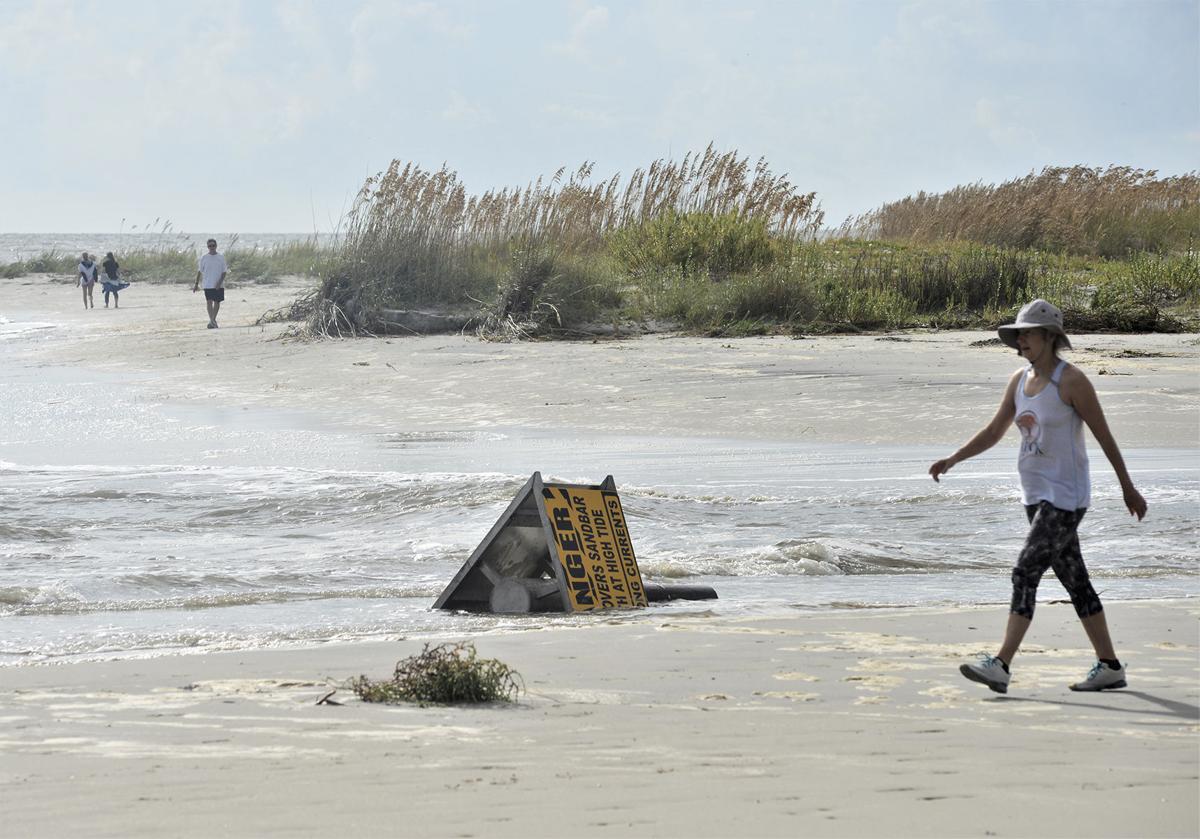 A woman walks past a sign warning of dangerous currents. The sign was knocked down by heavy seas overnight Tuesday.

A tow truck driver hooks up a flooded car on Stonewall Street.

A Comcast vehicle goes past an overturned trash can on flooded Cook Street.

A woman walks past a sign warning of dangerous currents. The sign was knocked down by heavy seas overnight Tuesday.

The heavy rainfall prompted the weather service to issue a flash flood warning overnight for the Sterling area and other parts of western and northern Glynn County, Booth said. The warning was canceled as rains tapered off, giving soggy areas a chance to drain.

“You got a lot of rain up there,” Booth said. “There was over 7 inches just west of Brunswick. That’s pretty substantial and the reason for the flash flood warning up there.”

The heavy rains started early Tuesday afternoon and continued overnight. Some 3.72 inches dropped on Sterling in just a four-hour stretch, between 1 p.m. and 5 p.m., Booth said.

The downpours were prompted not by Hurricane Sally’s approach Tuesday and landfall around 7 a.m. Wednesday on the Alabama Gulf Coast, but by a stalled cool front over Southeast Georgia. Essentially, the front stopped over the Isles due to lack of winds to push it, settling on the region and creating ripe conditions for heavy thunderstorms.

While there is a 60 percent chance of rain through today, it should be nothing like the drenching the Golden Isles experienced in the last 24 hours, he said. As Sally’s storm system weakens and treks cross Alabama and central Georgia toward the coasts of the Carolinas, it should get the front moving north, Booth said.

“Actually, Sally’s helping us,” he said. “We should see as much rain up there as we did (Tuesday).”

Much of the Brunswick Police Department’s overnight patrol shift was spent assisting motorists stuck in flooded roads, rising waters around homes and other high-water issues. Calls for assistance due to flooding spiked around 2 a.m. Wednesday, according to the police department’s log entry for the 6 p.m. to 6 a.m. shift.

“Officers responded to many calls in reference to stranded motorists who had water overtaking their vehicles, homes that were flooded, traffic hazards, abandoned vehicles, and flooded roadways,” the police shift commander reported. “Officers assisted citizens...and began a list for public works of roadways that were impassible. Officers also notified Red Cross in reference to citizens who had flooding in their residence.”

Streets in Goodyear Park were barely passable, including several around the hospital. A portion of Hampton Avenue was closed around 6 a.m. Wednesday while a crew removed a fallen tree.

Anna Kirkland watched in the wee hours Wednesday as the waters engulfed her yard in the 600 block of Wolfe Street in Brunswick. Video she posted on Facebook Wednesday morning showed the waters rippling over the top step of the front entrance of her home.

“It didn’t get this high during the last two hurricanes,” Kirkland said. “It rose up to the third step.”

The floodwaters had receded somewhat by dawn, but a sheet of water still covered the yard. She and her 14-year-old son Harrison walked barefoot to her Honda Accord only to discover water inside the vehicle. Fortunately for the two, the vehicle started right up.

Residents on St. Simons Island reported surging tides that ripped out a beach access walkover near the King & Prince Hotel.

“That was the public access stairs at the King and Prince that floated by,” islander Brant Davis said, narrating footage he took of the crashing surf around 8:30 a.m. Wednesday as the wooden structure drifted south. “It’s (the walkover) around the pier area now.”

The third day of the federal hearings into last year’s shipwreck of the freighter Golden Ray had to be relocated due to flooding issues at the Marshes of Glynn Library in Brunswick, a U.S. Coast Guard spokesman said. The hearing was moved to the state Department of Natural Resources offices at the foot of the Sidney Lanier Bridge.

Alec Eaton, acting director of the Glynn County Emergency Management Agency, said early Wednesday morning that crews were out and about in the county assessing potential flood damage.

Downtown Brunswick was not spared.

When D’Andre Pasco, a Sea Island Co. employee, woke up early Wednesday, he was greeted with a veritable lake in his front yard and water in his sedan’s floorboard. He had to take the day off from work to get the car sorted out after the engine failed to turn over and water made its way into the cab.

“The water was rising all the way to my engine, which is very unfortunate,” Pasco said. “But flooding is pretty frequent around here.”

The Ellis Street resident routinely parks his car on the side of the road and said the heavy rains and flooding. Tuesday night was by far the worst flooding he has seen in the city so far.

“I call this Brunswick bi-polar weather because it’s very unpredictable. You’d never expect it would be like this (on Tuesday), ” Pasco said.

He wasn’t the only one talking to his insurance company.

The rain that flooded Brunswick and the islands didn’t fall evenly.

That’s why the crew on the Demere Road-East Beach Causeway roundabout were able to put a layer of asphalt over the gravel base.

“It rained on both sides of us and out to sea,’’ but skipped over the roundabout so work went on, Glynn County Engineer David DeLoach said.

But it came down hard Tuesday night and that may delay the project past the planned completion this weekend. Before the top coat can be applied, the paving base must be completely dry so that a tacky coating will adhere when it is sprayed.

Asked if traffic could travel on the single layer of asphalt, DeLoach and fellow county engineer Phil Highsmith said it could, but there are other issues that would keep vehicles off.

Workers must pour the concrete splitter islands that will keep traffic in the right lane headed into the roundabout, pedestrian crosswalks must be completed and signs and striping installed, they said.

DeLoach and Highsmith wouldn’t hazard a guess on when paving would resume given the extended forecast of more rainy weather.