Sign Up
Log In
Purchase a Subscription
You are the owner of this article.
Edit Article Add New Article
You have permission to edit this article.
Edit
Welcome, Guest
Home
FULL MENU
News
Life
Sports
Obits
e-Edition
Classifieds
Jobs
Events
Subscribe
doc. 21/22
1 of 7 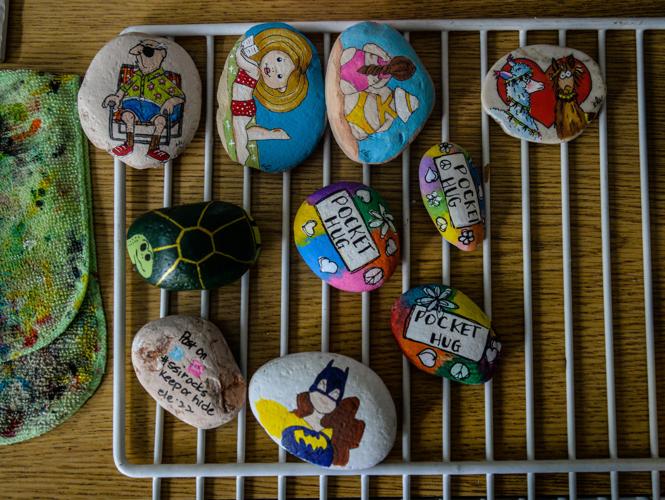 Some of Lorrie Ethridge’s completed rocks sit on a rack. Below, she paints her latest rock, a plump green frog. 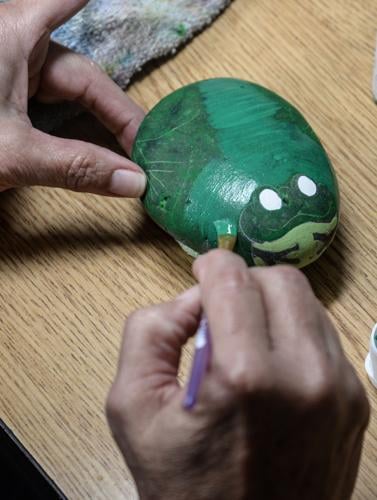 She paints her latest rock, a plump green frog. 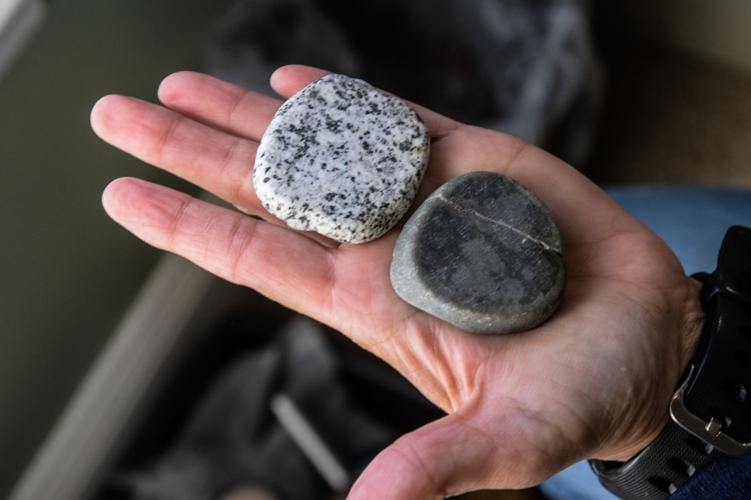 She holds stones ground flat that were formerly part of a square of tile. 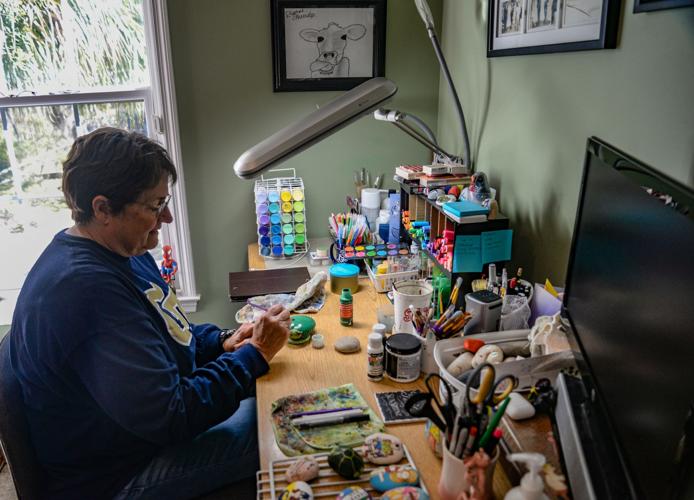 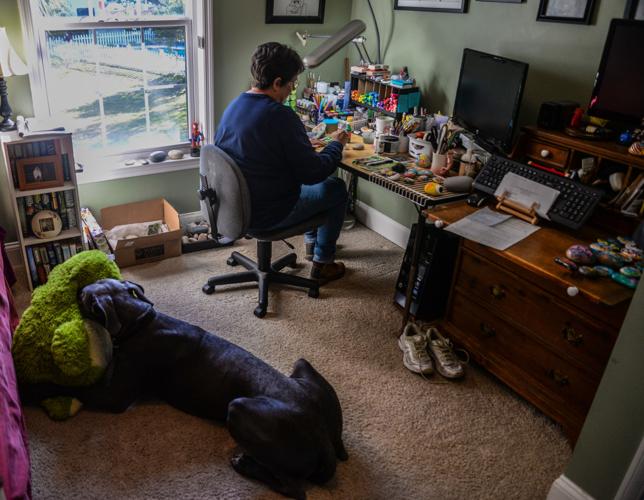 Lorrie Ethridge paints as her Great Dane Harley rips into a toy. 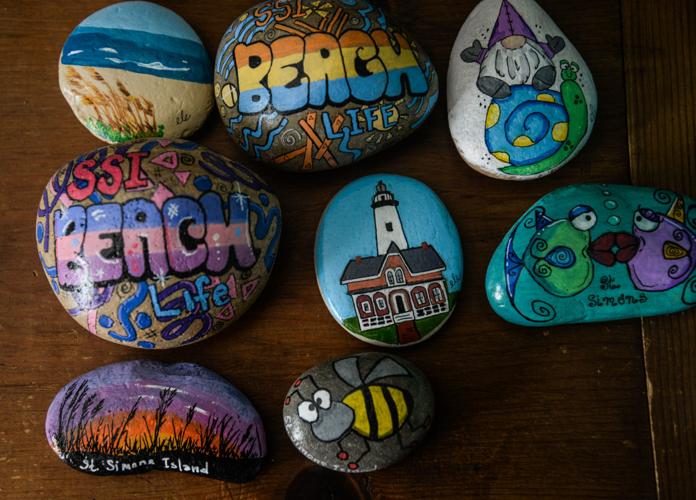 A painting of the St. Simons lighthouse and keeper’s cottage is in the middle of a collection of painted rocks. 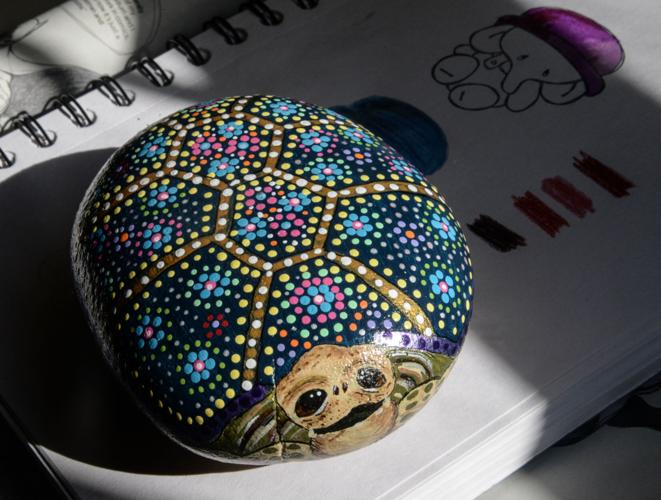 A mandala style painting of a turtle sits in the sun in Ethridge’s studio. Mandalas are more time-consuming because they are individual dots.

Some of Lorrie Ethridge’s completed rocks sit on a rack. Below, she paints her latest rock, a plump green frog.

She paints her latest rock, a plump green frog.

She holds stones ground flat that were formerly part of a square of tile.

Lorrie Ethridge paints as her Great Dane Harley rips into a toy.

A painting of the St. Simons lighthouse and keeper’s cottage is in the middle of a collection of painted rocks.

A mandala style painting of a turtle sits in the sun in Ethridge’s studio. Mandalas are more time-consuming because they are individual dots.

Most people on St. Simons Island have seen the little hand-painted stones lying between live oak roots, beside steps, in flower beds and many other hiding places on St. Simons. The rocks are not hidden well lest toddlers miss them.

Joy Elliot started St. Simons Rocks four or five years ago, an activity by her reckoning that was inspired by Megan Murphy of Cape Cod.

“Now they do it all over the world,’’ Elliot said.

Murphy, who was going through a hard time having just lost her parents, walked the beach on Cape Cod for comfort. She collected some smooth stones from the Cape’s rocky beach, wrote messages on them and returned them, Elliott said.

People who found her comforting and uplifting messages on the rocks responded that it was exactly what they needed. Thus started the Murphy’s Kindness Rocks Projects that Elliot picked it up on St. Simons.

“I had young grandchildren when I moved to St. Simons. Except for the park and a beach, there wasn’t much for the kids to do,’’ she said.

She learned about Kindness Rocks, got her grandchildren involved and they painted and hid rocks.

When she started her Facebook group, SSIRocks, about 300 people signed up in about two hours. Now there are 6,527 members, equal to about a third of the island’s population. She estimates about 45% live elsewhere.

On the first rock hidden on a June 22, rock painters met at the lighthouse and hid some 100 rocks around the village and lighthouse. Finders from West Virginia, Ohio, Florida and “all over” said they had found them.

Ruby Henderson, one of three administrators, put it on Instagram as #SSIRocks, and as Elliot said, “It just kind of took off from there.”

There is, however, a big difference in St. Simons Island’s beach and Cape Cod’s. The Cape’s beaches are littered with stones while St. Simons has only fine sand except for the big Johnson rocks.

Elliott and other painters bought stones, but in the past few months it has been trouble finding any.

“I think we must have painted up all the good rocks,’’ she said. “Now they’re chalky with pocks and marks.”

Once cheap, small bags of good rocks are now $30 to $50 as demand outstrips supply.

“I have personally gone to every landscaping place within 50 miles of here begging them to buy rocks for us,’’ she said.

Most have declined, but she found a source on Amazon and that brought up a new problem as she ordered smooth river rocks 50 pounds at a time.

“UPS drivers have learned to hate us,’’ she said.

She finally persuaded Lowe’s and Home Depot to stock some, but she doesn’t know how long that will last.

Meanwhile, some of the local painters have resorted to other objects that will hold paint, including oyster shells and round pieces of wood.

That includes Lorrie Ethridge, who just started painting rocks after she and her husband, Glenn, retired from the Glynn County School System in April. The rocks are the first thing she painted since art class in high school, she said.

She was inspired when her Great Dane, Harley, sniffed out a rock as they were walking in the park off Mallery Street.

It seemed like a good thing to do with children and grandchildren when they visited at Christmas so she bought a kit to paint rocks. She painted her first rock at Christmas 2020, and it’s likely to become a lasting tradition for the Ethridge household.

When they had 15 people for July Fourth, she had 50 rocks painted that they hid all over the island.

“Every time somebody is here, we go hide rocks,’’ she said.

At least the ones her biggest admirer, Glenn Ethridge, doesn’t take for himself. He says there are lot of good rock painters on St. Simons, but asserts unabashedly, “I think Lorrie is the best.”

The shelves in his office a few steps from her studio are loaded with rocks.

She paints a lot of cute animals like kissing fish, a sunrise over dunes and Georgia Tech Yellow Jackets, Glenn’s favorite. She has a nice miniature of the lighthouse and keeper’s cottage, some comic paintings of people in swimsuits and an old man sitting in a chair wearing a Hawaiian shirt.

She paints them in a room she converted to a studio with paint pens, sketch pads, dozens of brushes and an untold number of colors of acrylic paint illuminated by sunlight from an east-facing window.

She was working on a frog recently as Harley enthusiastically ripped the stuffing out of a huge plush toy.

She and Ethridge said the local group includes a lot of people who live elsewhere who paint rocks at home and hide them when they visit the island.

Like Elliott, she has gotten creative in finding rocks to paint. In her collection of unpainted rocks, she has some gray and white stones that have been ground flat and polished. They were once secured to mesh intended for tiling bathrooms or perhaps a back splash above a kitchen counter.

When soaked long enough, the adhesives comes loose and she has free stones perfect for painting, Lorrie Ethridge said.

She also paints mandalas, a collection of dots in geometric patterns, a method that is very time consuming. The genre began in India to paint Hindu and Buddhist symbols.

There was a slight interruption, however, when COVID was at its worst and people just didn’t want to pick up anything, especially a rock someone else had handled. Exposed to fresh air and sunshine, they were likely harmless.

There was a sort of moratorium on hiding the rocks, but that faded as scientists gained more knowledge about the virus.

The painters are hiding rocks again even as the most recent round of the coronavirus spreads.

The virus, however, will likely peak in Georgia in a couple of weeks and drop as quickly as it rose, some researchers say.

Meanwhile, the rocks are spreading with no peak in sight.

The battle has a winner.

A small contingent observed National Maritime Day on Saturday with prayers and the placement of a wreath in memory of five merchant seamen killed just offshore in a U-boat attack during World War II.

Erick Caballero’s memories of the summer robotics camp he attended in middle school are foggy. But the impact the experience made remains clear to this day.

The decision to remove a Confederate monument from Hanover Square in downtown Brunswick earlier this week may have been premature, defenders of the statue claim.

Carl Alexander, who served as Glynn County Police Chief from 1987 to 2002, had a profound impact on law enforcement in the Golden Isles that continues to resonate a year after his death.