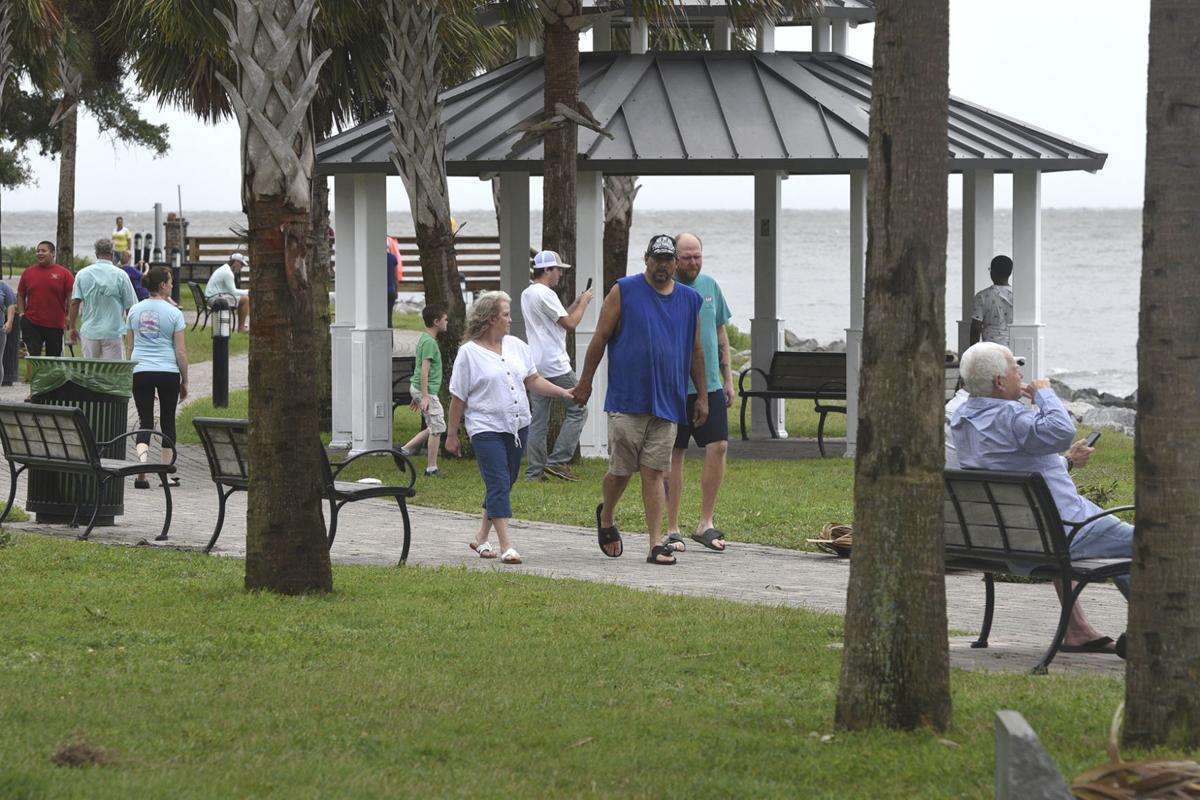 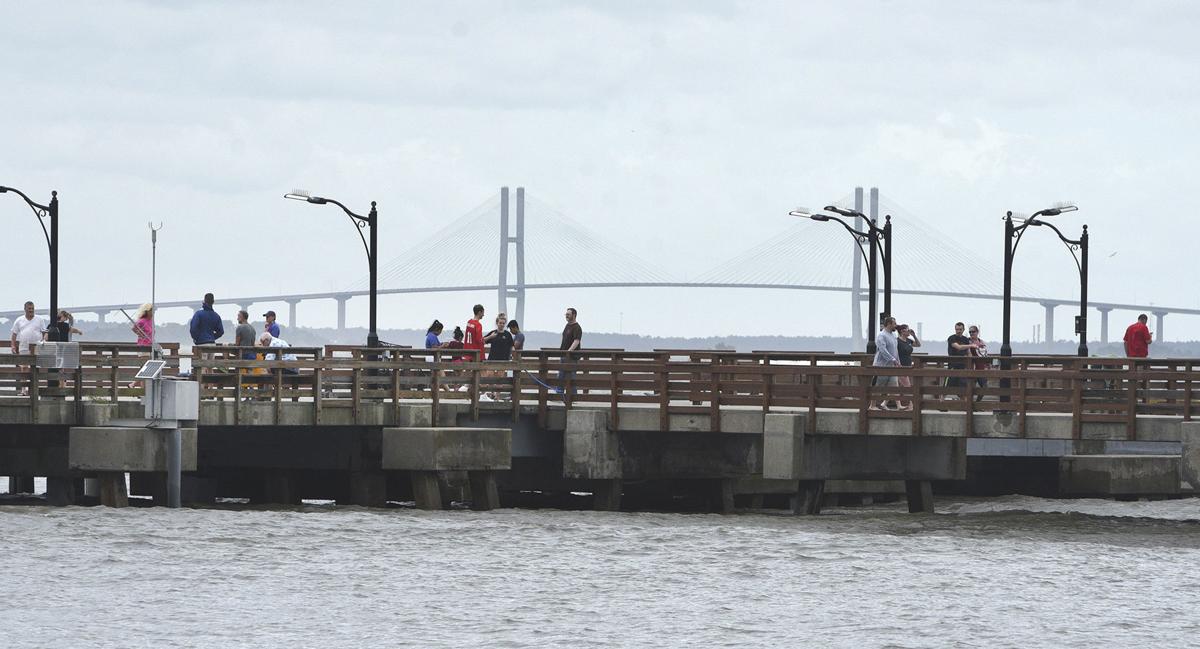 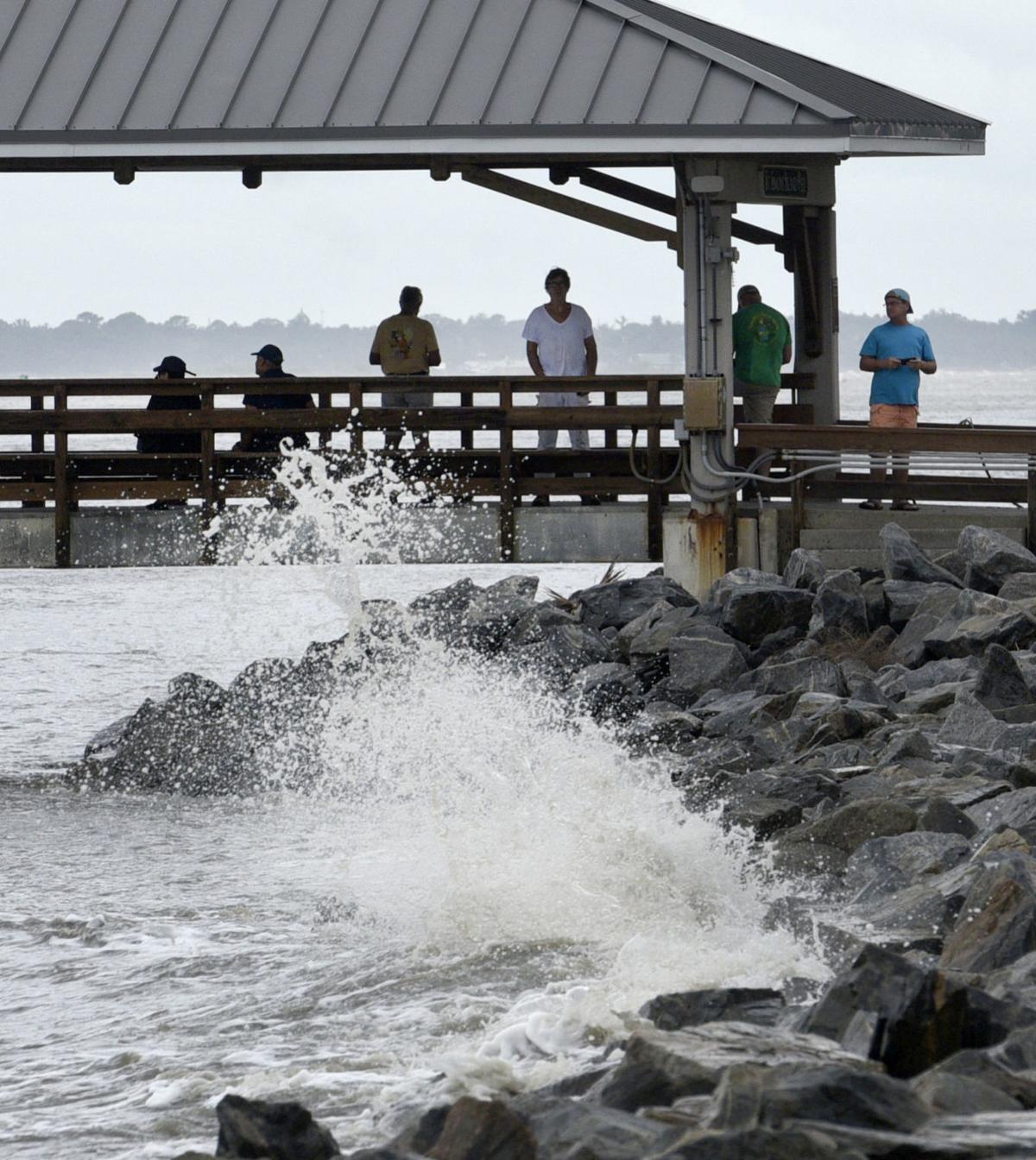 Waves crash against the seawall at Neptune Park on St. Simons Wednesday as high tide approaches. 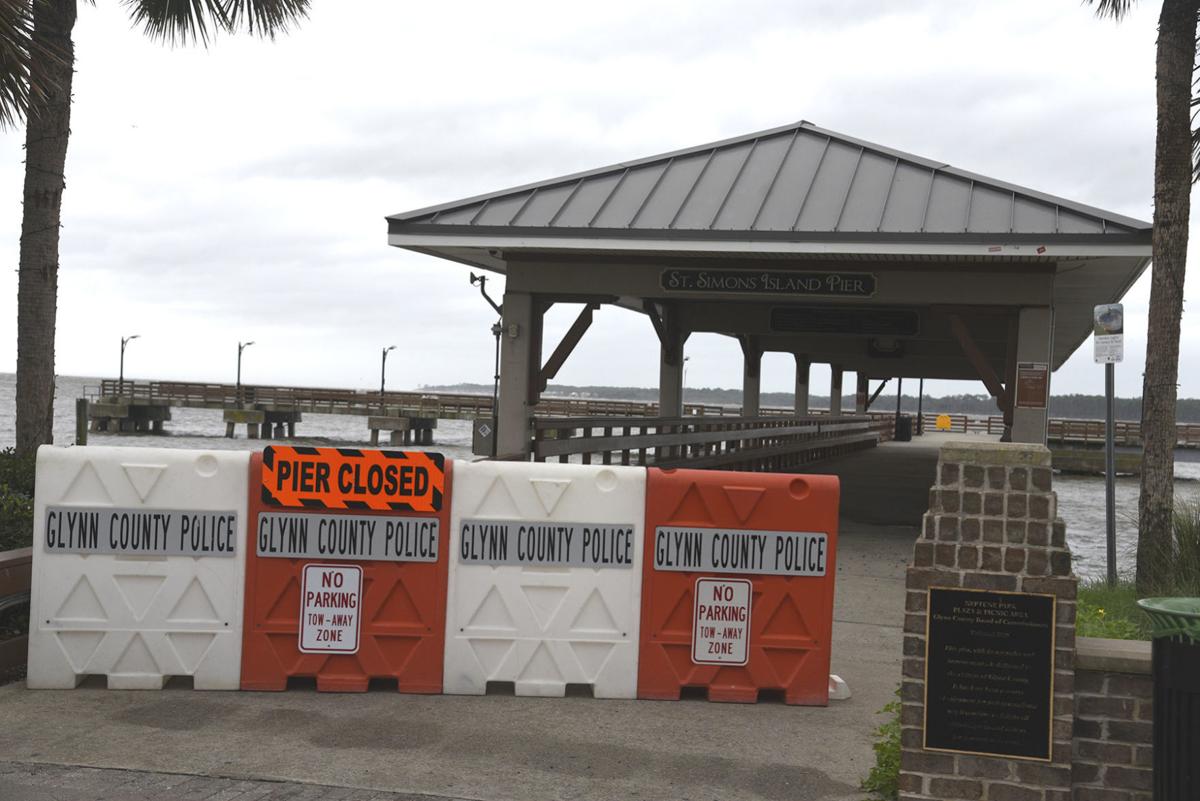 The St. Simons pier was closed Wednesday, but that didn’t stop some from venturing out on it. 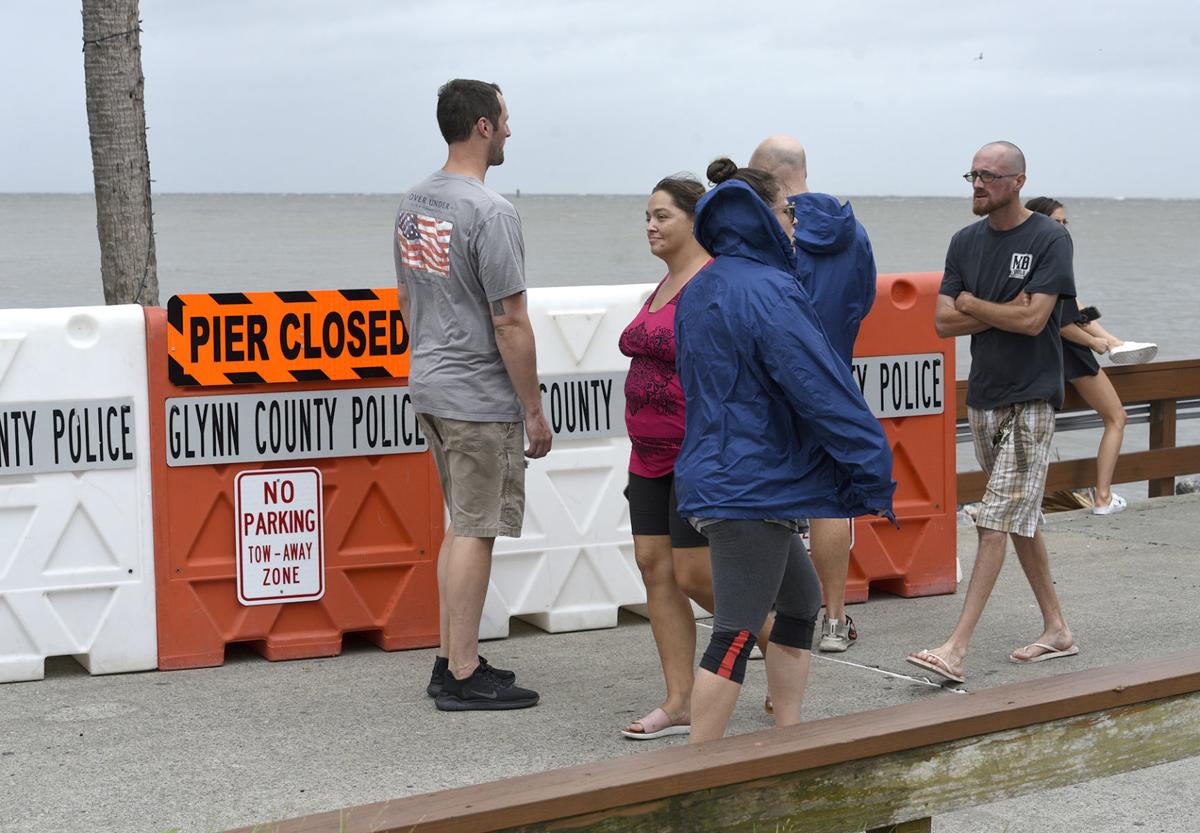 Onlookers walk past the pier closed sign at the St. Simons pier Wednesday during high tide.

Waves crash against the seawall at Neptune Park on St. Simons Wednesday as high tide approaches.

The St. Simons pier was closed Wednesday, but that didn’t stop some from venturing out on it.

Onlookers walk past the pier closed sign at the St. Simons pier Wednesday during high tide.

Hurricane Dorian was still somewhere down around the Florida state line by midday Wednesday, so the slanting rain, stiff wind gusts and the waves crashing upon Johnson rocks presented more novelty than peril.

Ashton Earnhardt leaned on the railing under the covered walkway at the St. Simons Island Pier, chatting with Christine Williamson about Dorian’s pending arrival here in the Golden Isles. The two St. Simons Island friends were among a scattering of folks who were drawn to the still-safe spectacle of the approaching storm.

“A what?” Earnhardt said, kiddingly. “Is that what this is all about, a hurricane?”

Both women had their respective homes ready for Dorian and their hurricane kits stocked. Coming out to get a peek was just their way of keeping calm before the storm.

“The house is prepared — it’s good to go,” Williamson said. “I just wanted to see it before I had to hide from it.”

Earnhardt and Williamson were not alone. A small but steady stream of curious sightseers strolled onto the pier and or mingled in the adjacent oceanfront Neptune Park. Several had leashed pooches in tow. One wave hit the Johnson rocks from a solid arching angle, eliciting a small roar from those bathed in the shower of sea spray.

The towering, white-foam rooster tails sprouting out on the Atlantic seascape about that time had nothing to do with Dorian — rather, it was the rare offshore appearance of a pod of whales, much to the delight of onlookers at the far end of the pier.

There was a steady flow of traffic just up the beach at Gould’s Inlet, where white caps whipped by ever-stiffening winds covered the beach, the Black Banks River and the Sea Island spit across from it.

And down at the Myrtle Street beach access point, swelling high tides were already pushing waters well up into the roadway. More than one surfing fool found the lure of the high crashing waves irresistible. Shirley Rasch and Jim Lanier just wanted to see how their favorite place in the sand was weathering the storm’s onslaught.

Rasch had already lost power at her place on Mallery Street, so a trip to the beach seemed in order.

“This our weekend beach,” she said. “We wanted to see what high tide was doing to our beach. And it is absolutely amazing.”

Lanier claims “cousin Sid” as an ancestor and shares the Marshes of Glynn author’s awe of our local natural beauty.

“I just wanted to come out and see it with my friend,” Lanier said. “It makes you respect the ocean even more, doesn’t it?”

Over on the island’s marsh side, the Frederica River had gone under water. Waters rose well over its eastern bank, nearing the bluff. The marsh on the opposite side gave way to an expanse of water into the western horizon.

The wind gusts were strong enough to make brothers James and Cody Hughes have to brace themselves at times and plant their feet on the dock boards of the pier at Epworth By The Sea.

“This is my favorite part,” said James, 27, looking out at the choppy Frederica River. “I love it when it’s coming in like this.”

The Hughes brothers are no strangers to hurricanes, employed as they are by the family’s tree trimming and tree removal business. Their father started Hughes Tree Service, which has sent the brothers from Corpus Christie, Tex., to New Jersey to clean up in the aftermath of hurricanes.

They have been here in the Golden Isles twice, for Hurricane Matthew in 2016 and again for Irma in 2017. Actually, the Hughes brothers had already been in town this time for a couple of months, doing contract work with the Sea Island Company. On Wednesday afternoon they were getting ready to switch from tree trimming to post-Dorian tree removal, if needed.

“Whatever damage this storm brings on the (golf) course, we’ll clean it up when it passes,” said Cody, 24. “It’s a family tradition.

“It’s a bad thing for storms to hit,” Cody added, raising his voice above a howling gust. “But they’re going to hit, and there’s work to be done, so we might as well go to it.”

Legislation meant to restore federal protections for migratory birds that have been rolled back by the Trump administration passed out of the U.S. House Natural Resources Committee this week on a party-line vote, 20-14.

David Whitmer, director of the Carl Vinson VA Medical Center in Dublin, returned to Brunswick for the second time in six months to update veterans on some of the new initiatives and changes offered.

If House Resolution 882 were to pass through the state House of Representatives any faster than it did this week, it’d have to be attached to a greased pig. But with extensive talk about the time needed to address budget cutbacks this session and the limited time to do so, the House took mor…

With each North Atlantic right whale important to the survival of the species — especially the adult females and their calves, a multi-agency state and federal effort is underway to save the life of the calf recently born to the right whale known as Derecha.