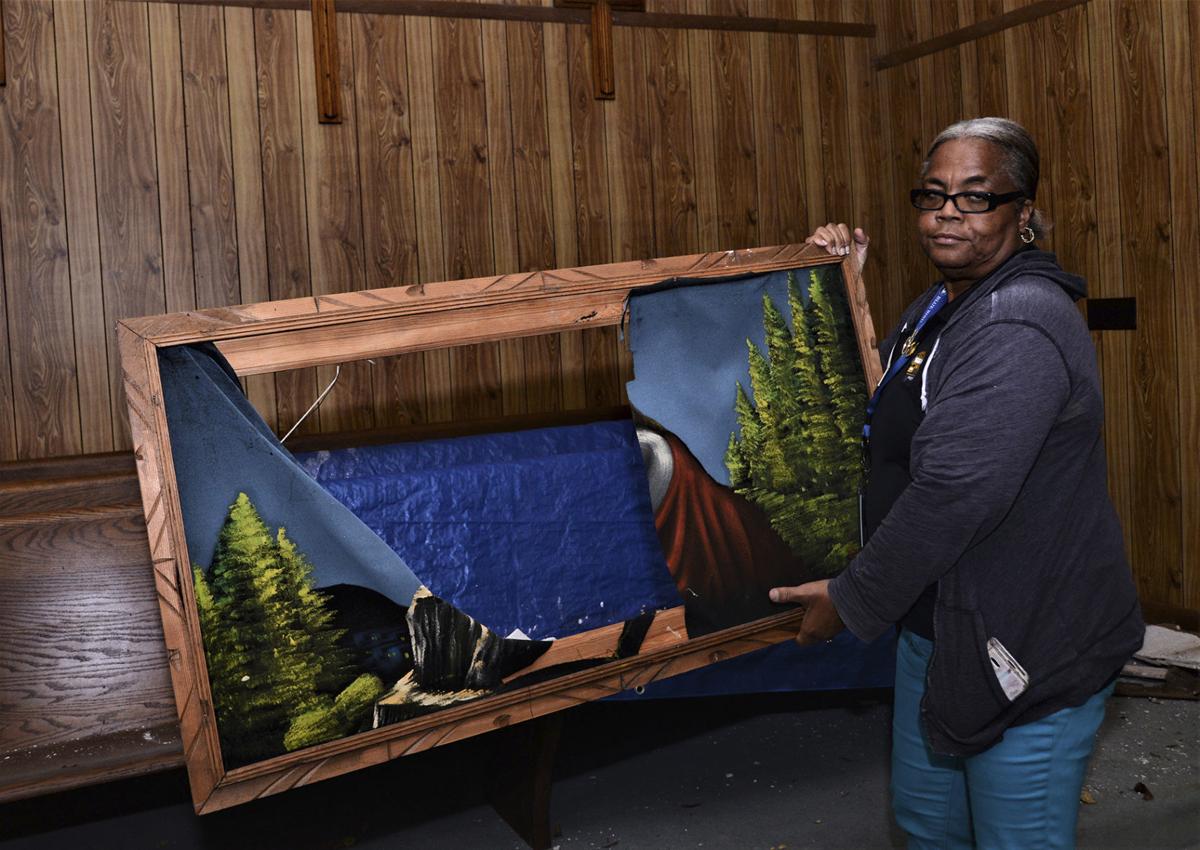 Ruby Jackson, trustee of St. Lukes AME Church, holds a picture of Jesus praying that vandals ripped down the center. 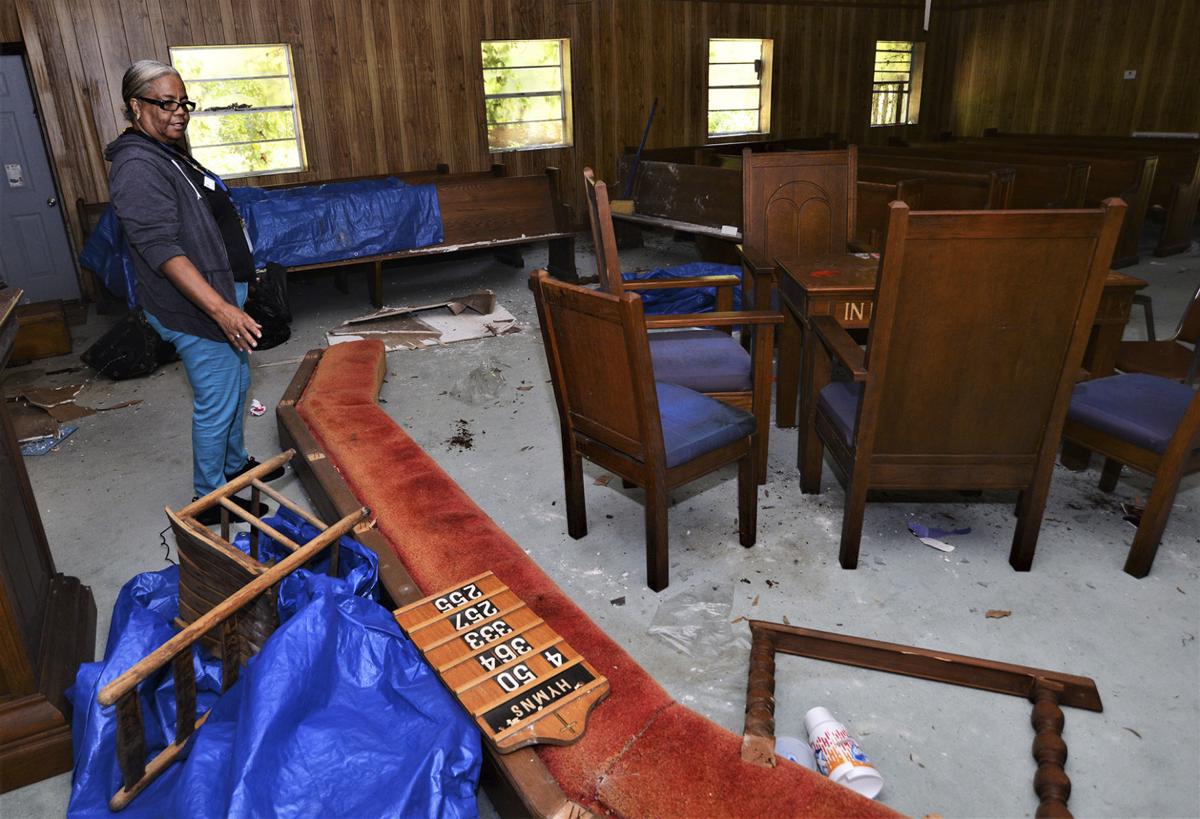 Jackson stands at the front of St. Lukes AME where an altar was torn down and vandales made a place to smoke around the communion table. 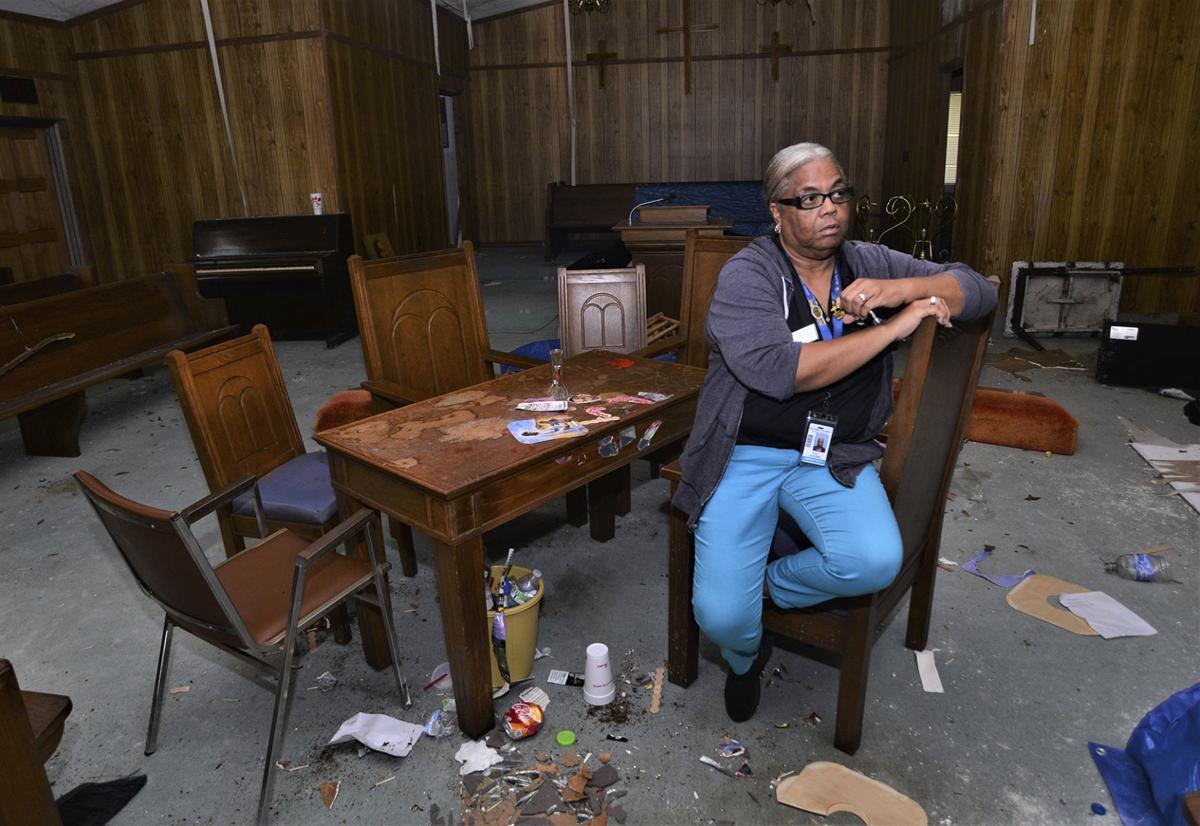 Jackson sits on the arm of a chair in vandalized St. Lukes AME Church wondered why it was targeted. 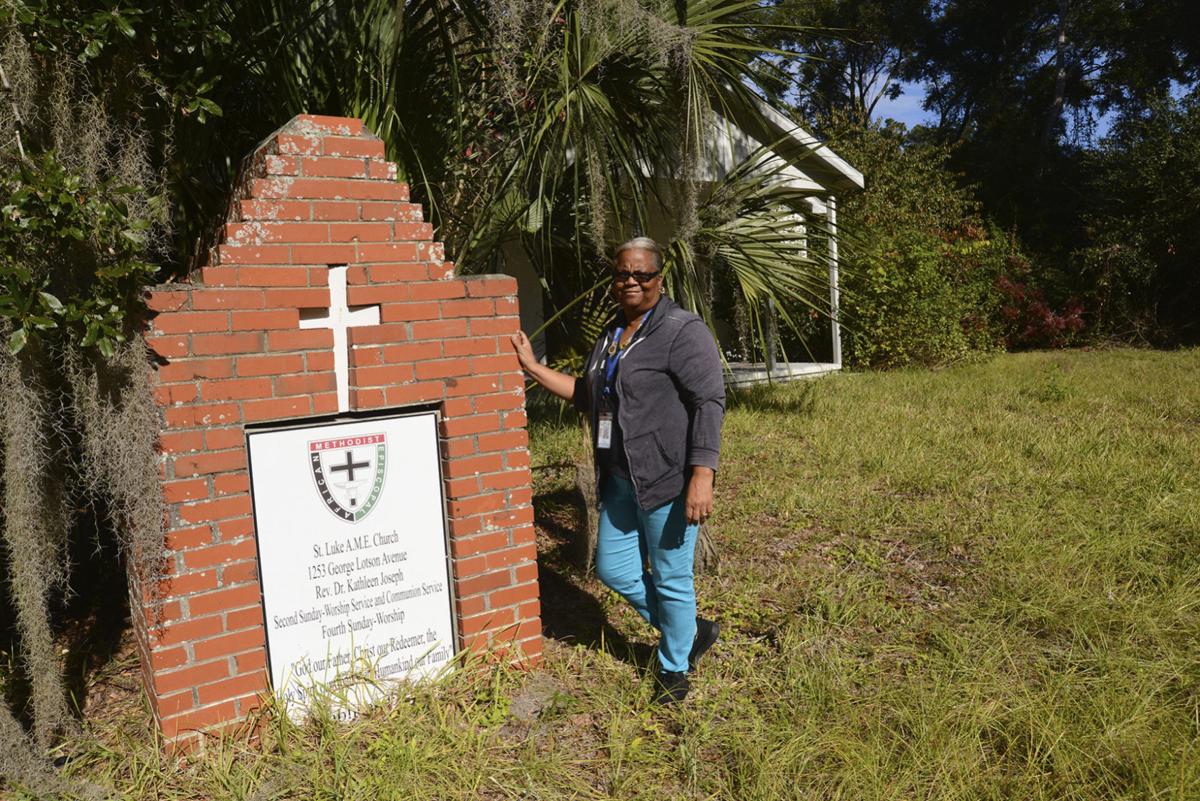 Jackson will a brick marquis at St. Likes AME Church made of the chimney bricks of a former one-room school for African-Americans that burned down.

Ruby Jackson, trustee of St. Lukes AME Church, holds a picture of Jesus praying that vandals ripped down the center.

Jackson stands at the front of St. Lukes AME where an altar was torn down and vandales made a place to smoke around the communion table.

Jackson sits on the arm of a chair in vandalized St. Lukes AME Church wondered why it was targeted.

Jackson will a brick marquis at St. Likes AME Church made of the chimney bricks of a former one-room school for African-Americans that burned down.

“Every time I come out here, I get depressed,’’ Ruby Jackson said as she climbed out of car at St. Lukes African Methodist Episcopal Church on St. Simons.

It’s not only because the church building will soon be torn down to be replaced by houses. She and other members bought the land at the end of George Lotson Lane and sold barbecue plates, fish dinners and donated money to buy the land and build their church.

She’s come to grips with that. The pain comes from the recent vandalism of the interior where she and her husband, Jerome, repeated their wedding vows, where voices blended in song and where preachers’ voices washed over the small congregation.

It starts outside where someone tore down the horizontal piece of 4-by-4 that formed a cross. Inside, the altar where people prayed lies in the floor with the decorative spindles scattered around the sanctuary. The communion table was pulled to the front and six mismatched chairs grouped around it seemingly for the vandals to sit and smoke.

Pieces of a shattered mirror, plastic handles of funeral home fans and pieces of fixtures are scattered randomly around the big room. A canvas picture of Jesus praying that hung in the front of the church was ripped down the center.

Police have investigated, but Jackson said she has heard of no arrests and that the break-ins were repeated.

If a real estate closing goes forward as planned next week, the church and grounds will become the property of the Palmetto Building Group, sold to it by the state AME church, which has ownership of every AME church house in Georgia regardless of who paid the bills.

That sale is part of a consent agreement that Judge Stephen D. Kelley approved ending a lawsuit that the Jacksons and Ruby Jackson’s mother, Ruthie Cobb, filed to stop the mother church from selling their home church. All three are trustees of the church.

The decision to sell the church came after Tropical Storm Hermine blew a tree onto the church roof in 2016. The trustees asked district church officials for a loan or other help to repair the caved-in roof. Instead, state church officials opted to sell the property and merge the congregation with another on the mainland. The island congregation found a friend in lawyer Jim Barber who filed a suit that resulted in the settlement that the trustees found palatable.

Not that Jackson doesn’t wish it had gone another way.

Looking at holes in the collapsed ceiling, she said, “This could have been fixed if they had left us alone.”

Temporary repairs done free had kept the interior from further deterioration until the unknown vandals broke in, although vandalism isn’t a strong enough word for Barger.

“This is blasphemous,’’ he said.

Jackson just can’t make sense of any of it.

What the vandals smoked is unknown although they left an empty wrapper package that said the contents were vegan, original hemp and GMO and tobacco free.

Some of it is very puzzling like gluing shards of broken mirror to the communion table and putting empty bottles and cans in a makeshift trash can while strewing refuse down the center aisle and among the pews.

“It’s a shame that somebody would be at a point in their lives when they think this is good behavior,’’ he said.

Barger picked up an undamaged picture of Jesus and some other items to ensure they weren’t damaged later. But there are some things he and Jackson couldn’t carry away. There are 24 12-foot pews and other fixtures the church wants to preserve but has no way to move them. They need help with moving and storage but don’t know who to ask.

Those could go in the new church that will be built on ground that the main AME church will buy under the settlement agreement. The pews would have to be stored during construction on a lot beside St. Ignatius Episcopal and that would take at least a year.

The only thing left unscathed is the red brick marquis out front. Even it means a lot to Jackson because it was the chimney of the school that once stood on the property. The wood frame school house was burned down, but before it was turned to ashes, St. Lukes met there.

“It’s where I joined the church,’’ Jackson said.

Standing in front of St. Lukes, Jackson remembered it was just six years ago when two bus loads of worshipers came from Augusta to worship there.

“You look at this place and dinner on the grounds and preaching and it was vibrant,’’ Barger said.

It’s still vibrant but it’s not with the sound of a piano or voices singing hymnals. It’s the percussion of nail guns and the keening of saws on a nearby construction project.

Barger found some irony in the vandalized communion table that is inscribed with “Do this in remembrance of me,’’ because many seem to have forgotten St. Lukes.

“Whoever is doing this says this doesn’t matter anymore,’’ he said. But this is our roots. It should matter to all of us.“

The church trustees will soon begin construction on a building, and Barger says it will be good.

Culinary arts students at the Golden Isles College and Career Academy are offering an opportunity this week to ease some of the holiday stress with “take & bake” meals that the students and their instructors will prepare.