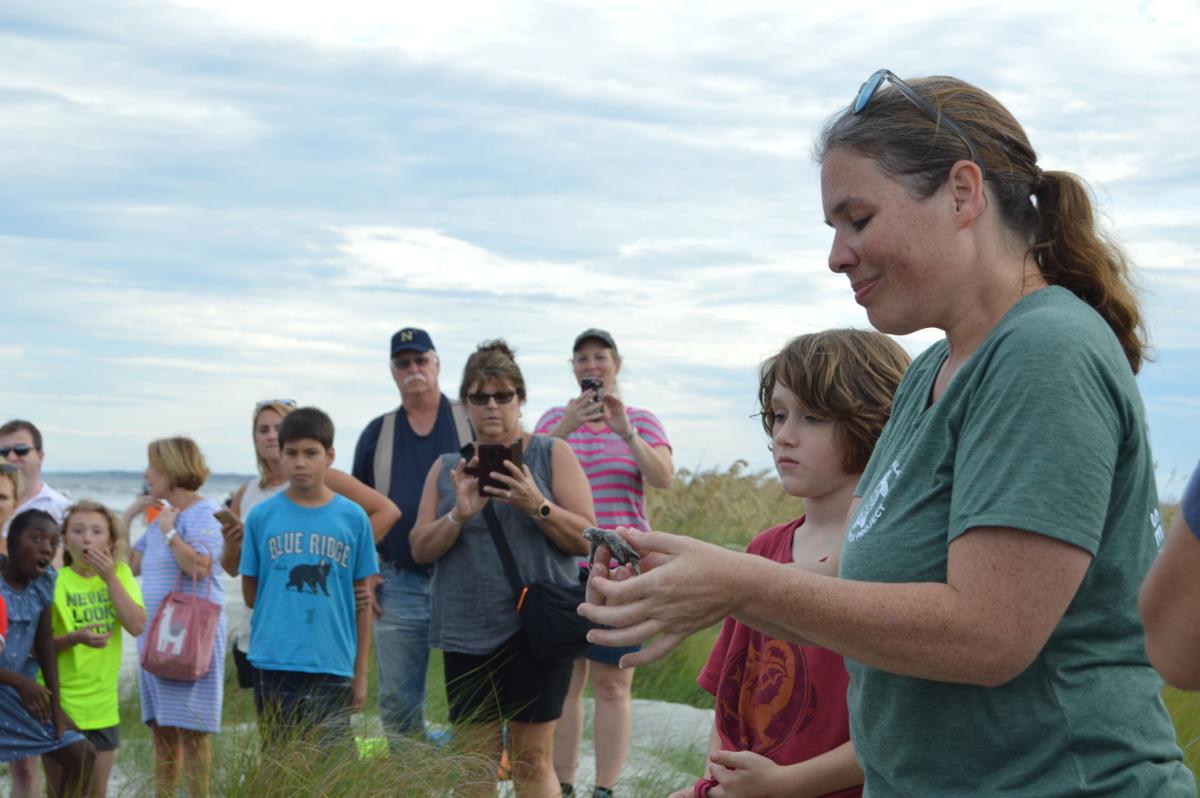 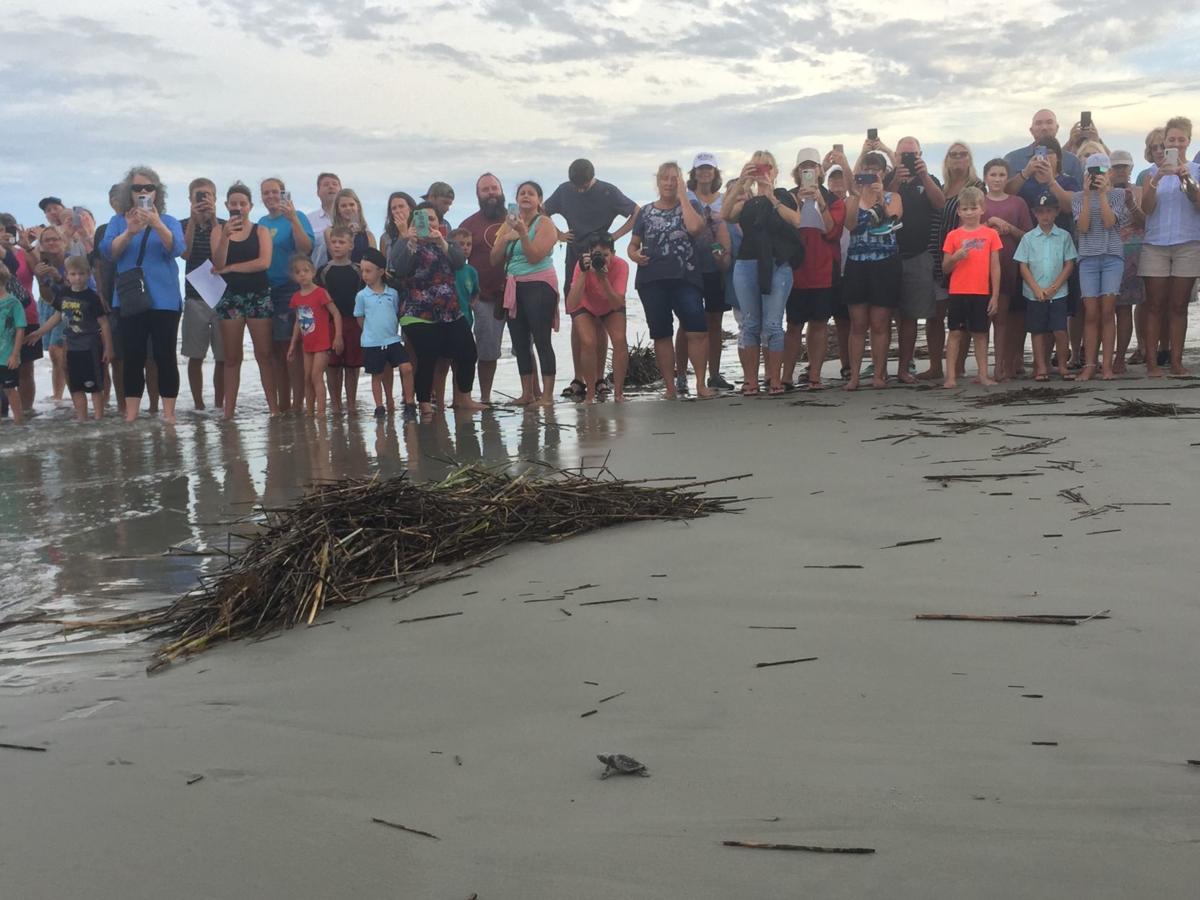 A crowd cheers on a hatchling Thursday as it makes its way into the Atlantic Ocean. The St. Simons Island Sea Turtle Project invited the public to observe a sea turtle nest excavation and hatchling release on St. Simons. 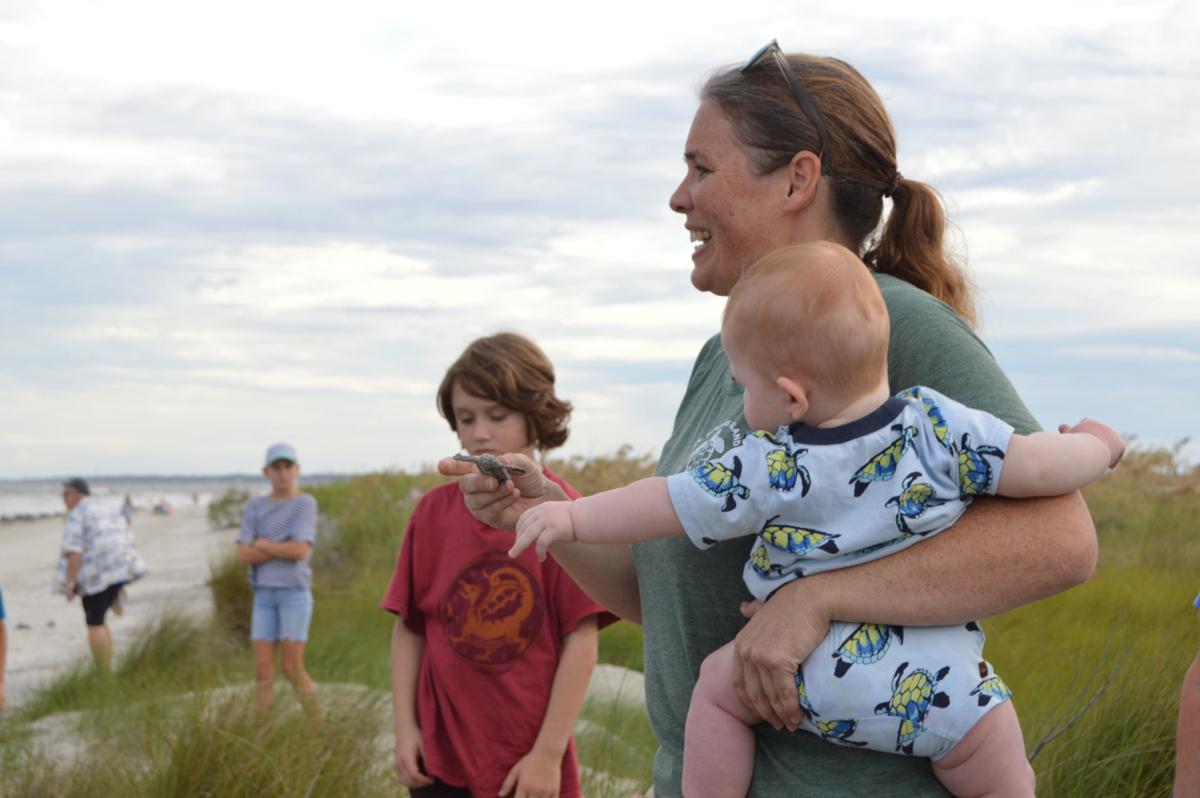 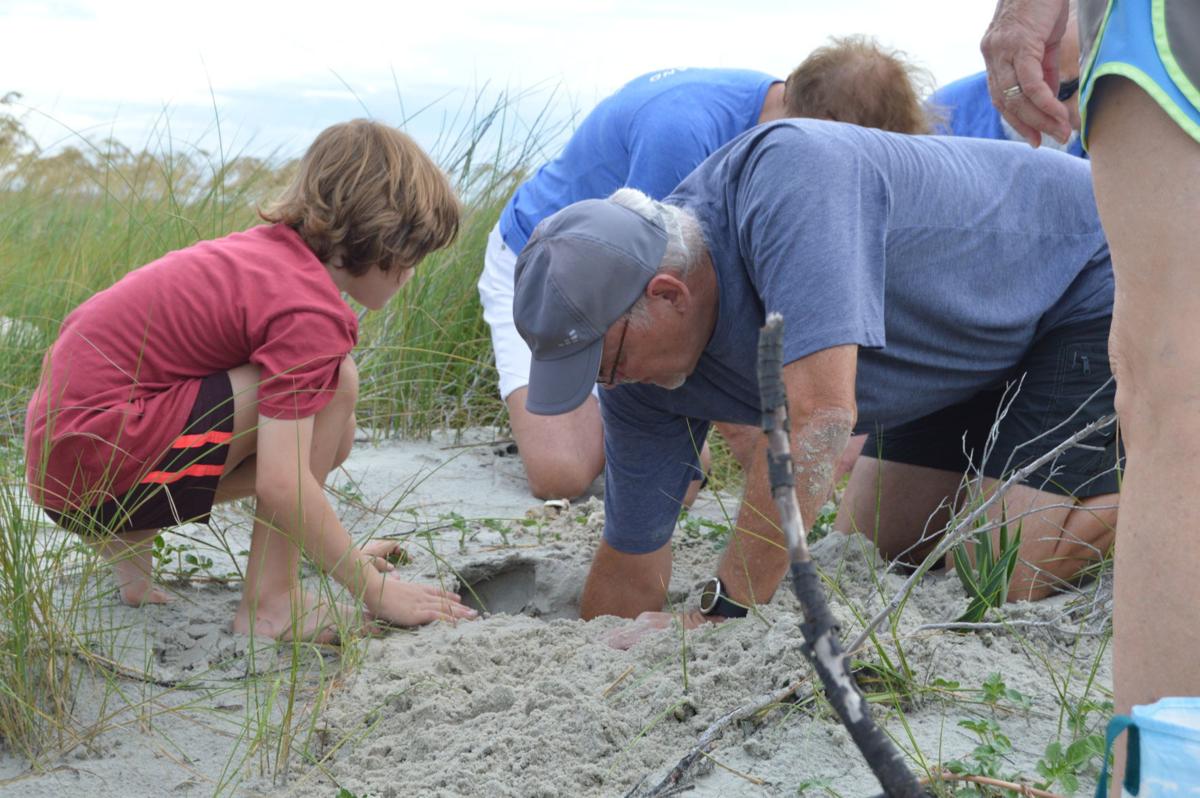 Volunteers with the St. Simons Island Sea Turtle Project excavate a nest during a public program Thursday on St. Simons. 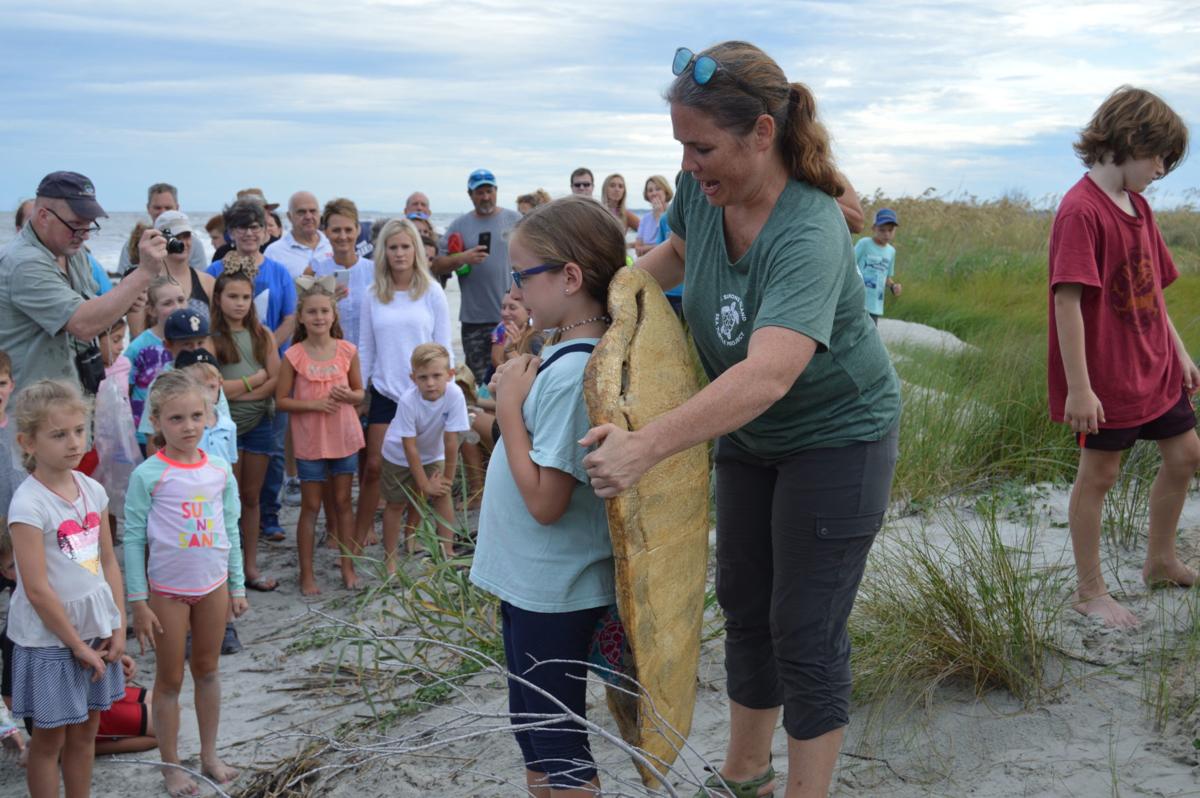 Catherine Ridley, a volunteer with the St. Simons Island Sea Turtle Project, showcases the size of a loggerhead turtle shell for a crowd Thursday during a sea turtle nest excavation on St. Simons.

The loggerhead hatchling’s first view of the Atlantic Ocean was slightly obstructed, by a crowd of more than 100 people who’d come to welcome the baby turtle into the world.

The straggler had been left behind by her brothers and sisters several days before, when they hatched from the nest on St. Simons Island and began their perilous journey into the ocean.

“Imagine just being born and swimming for as long as you possibly can for about two straight days,” said Catherine Ridley, a volunteer for the St. Simons Island Sea Turtle Project, which monitors sea turtle nesting on the island. “That’s what hatchlings do. They swim for about 48 hours, until they reach a place called the Sargasso Sea.”

The St. Simons Island Sea Turtle Project hosted its second public nest excavation during the final hours of sunlight Thursday. The event, per usual, attracted many interested beach visitors, all wishing to learn more about the sea turtle nesting process and hoping to see hatchlings.

The purpose of the excavation was to inventory the second and third nests laid this season on St. Simons. Both nests hatched this week. The project team digs up each nest five days after it hatches, to count hatched and unhatched eggs and look for trapped hatchlings.

The St. Simons Island Sea Turtle Project is part of a larger, coast-wide effort called the Georgia Sea Turtle Cooperative. The goal of the cooperative is to conserve loggerhead turtles in Georgia and the habitats on which the turtles depend.

The team on St. Simons is made up of 15 volunteers, who spend early mornings and late nights during nesting season patrolling the beach, searching for tracks and nests.

“Everyone on the team has been here for several years, and many of us have led nesting efforts on other islands before joining the SSI project,” Ridley said. “We walk the entire beach from the lighthouse to Gould’s Inlet every day, but because we’re on a developed island, there’s not always a lot of payoff, like there is on many of our other islands. Some people might get discouraged, but this group stays committed, no matter what.”

St. Simons has fewer nests than most of Georgia’s islands, but because the island brings in more visitors and is home to more residents, the public events hosted by the St. Simons project attract large crowds.

“We’re intentional about inviting the public to join us and offering our programs for free, because we want to make conservation accessible to everyone,” Ridley said. “We share information about loggerheads and their natural history, but at the end of the day, our priority is to get each person who attends to think about what they can do to help.”

Ridley has been a part of sea turtle conservation efforts for many years, but the work took on new meaning this year after she gave birth to her son, Grayson. This summer, Grayson has tagged along on most of Ridley’s trips up and down the beach, and he bounced on her hip Thursday while she addressed the crowd.

As several volunteers worked on removing hatched and unhatched eggs from the nest, Ridley talked with the assembled group of observers about the project and its conservation efforts.

The group began at the third nest laid on St. Simons this season, then moved down to see the second nest.

“A lot of people know about the Sea Turtle Center, but what you may not know is that every single island up and down our coast has a nesting program,” Ridley told the crowd, as she held Grayson in one arm. While she spoke, Grayson fidgeted and tried to tug away the sheet of notes in her hand. “And from May until October, which is sea turtle nesting season, there’s somebody on all of our beaches.”

Ridley has long been passionate about this work, but she said there’s a greater sense of urgency now that she considers the conservation efforts through the lens a mother.

“I tried for a very long time to have this little boy, and I can’t believe how lucky I am to get to share sea turtles with him,” she said after the event Thursday. “He’s only seven months old, but he’s already gotten to watch us relocate nests and see hatchlings crawl to the ocean.”

The project’s volunteers are trained by Georgia DNR and have a permit to work with protected turtles.

Georgia’s sea turtle nesting efforts have been in the spotlight this summer, due to the record nesting numbers seen this season.

“This has been a record year for Georgia’s coast,” Ridley told the crowd. “It’s really amazing. We’re projecting to have over 4,000 nests this season.”

The single hatchling left behind, which was found in the third nest, became the star of the show once again at the end of the event, when the crowd divided into two lines to open a space for the hatchling to crawl down into the choppy waters.

Cheers of “Go, turtle, go,” spurred the hatchling on as it worked its tiny muscles for the first time and began what will hopefully be a long life in the Atlantic Ocean.

Until, maybe, the turtle returns in more than 30 years, to lay its own nest on Georgia’s coast.

It’s now the responsibility of those who came to send the turtle off, along with the communities in which they live, to protect the habitat so the turtle will have a place to return.

“I hope that everyone leaves our programs feeling a little more inspired and motivated to take action,” Ridley said.

Information about future St. Simons nest excavations can be found at facebook.com/SSITurtles.