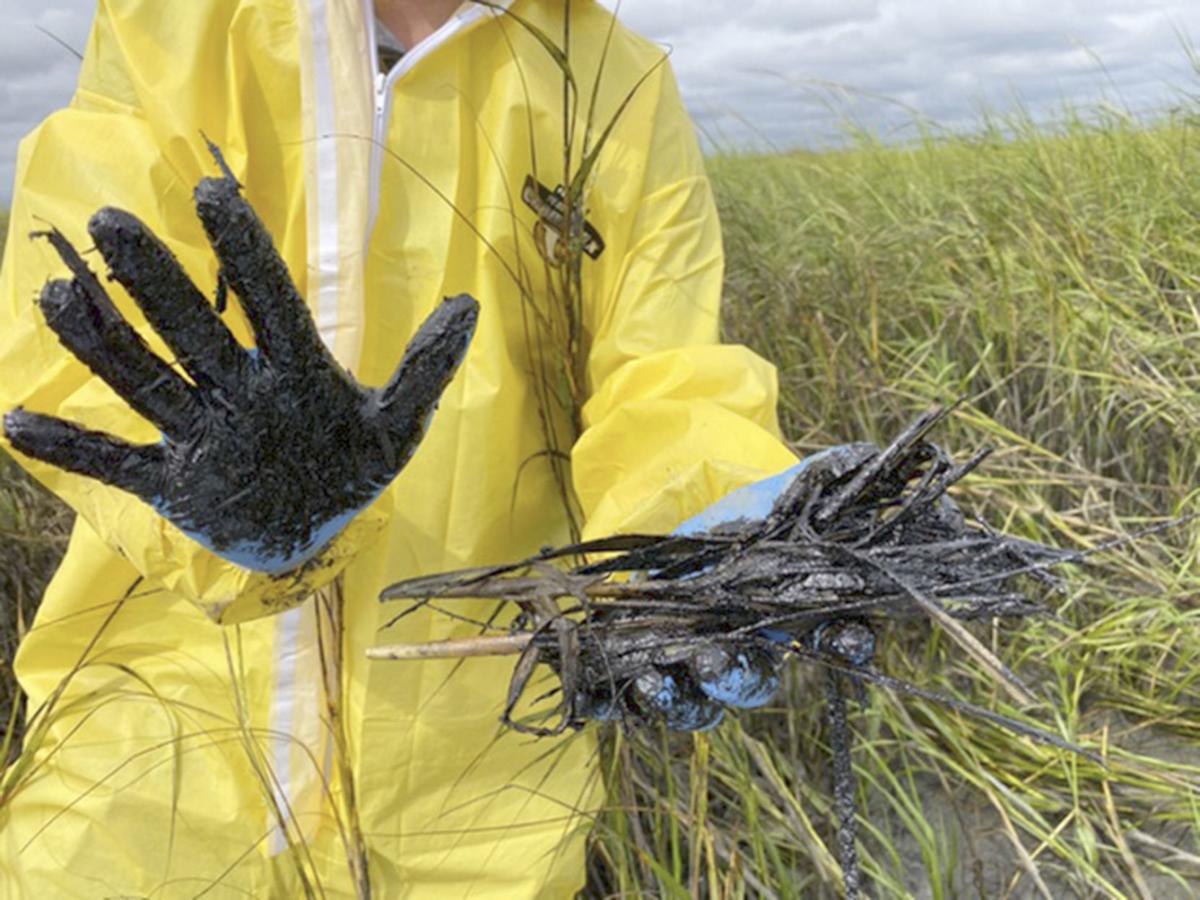 Fletcher Sams, executive director of the Altamaha Riverkeeper, shows off oil found in the marsh from the shipwrecked Golden Ray. 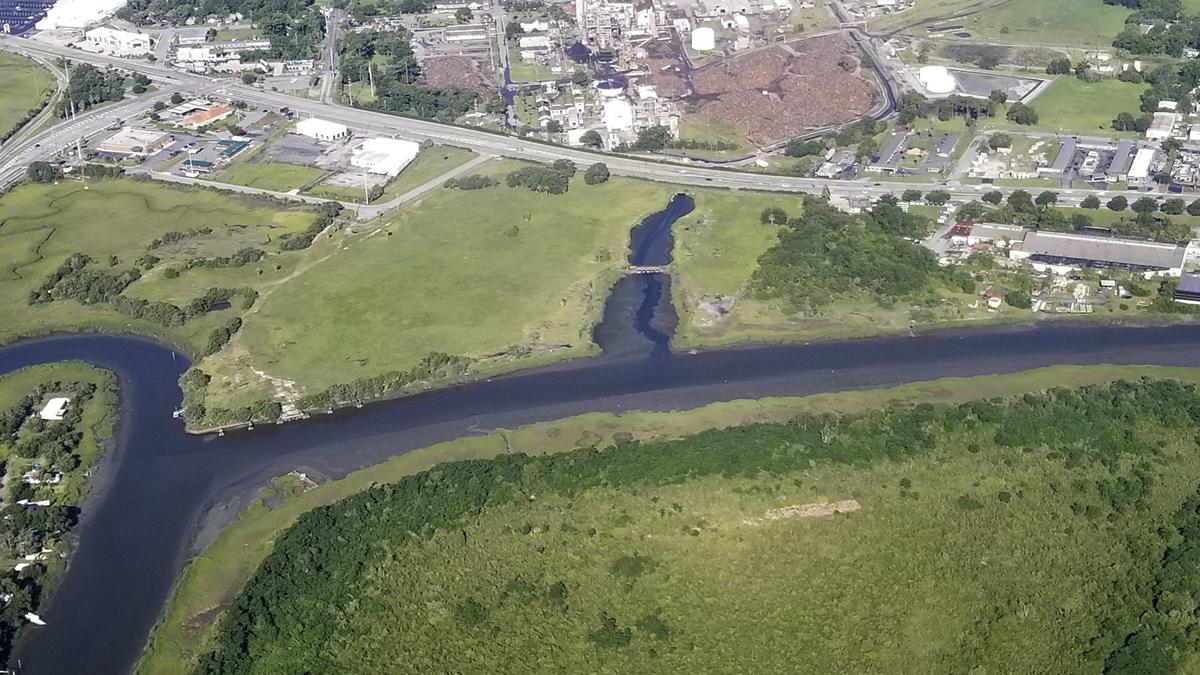 The Terry Creek outfall ditch, Dupree and Terry creeks are visible in this aerial photograph.

Fletcher Sams, executive director of the Altamaha Riverkeeper, shows off oil found in the marsh from the shipwrecked Golden Ray.

The Terry Creek outfall ditch, Dupree and Terry creeks are visible in this aerial photograph.

It likely comes as little surprise that the response to pollution released from the wreck of the M/V Golden Ray made the Georgia Water Coalition’s annual Dirty Dozen list of state polluted areas and circumstances that deserve attention and action.

“The wreck of that cargo vessel, carrying 4,000 vehicles, led to the fouling of area beaches and marshes with oil,” said Joe Cook, Paddle Georgia coordinator and guidebook series author for the Georgia River Network. “Federal disaster protocol to mitigate a disaster like this was never properly implemented, and responsible parties must be held accountable for the restoration of damaged areas.”

“In that plan, there is a grid system that is mapped out on the Georgia coast that identifies environmentally sensitive areas that must be protected, and how they are protected — in this case, with booming and skimming boats,” Sams said. “In the case of Golden Ray, those plans were not enacted, for the most part, until three weeks after the spill.”

Other areas that came up for what could be called dishonorable mention are the Altamaha River at the Raynoier Advanced Materials site in Jesup, a coal-ash accepting landfill along the St. Marys River and the Terry Creek outfall.

“Next year, Georgia’s Environmental Protection Division, EPD, will issue a new pollution control permit for the facility,” Cook said. “But, if EPD’s actions in recent years are of any indication, it seems unlikely that this new permit will fix this ongoing pollution problem.

“The state agency has repeatedly defended its existing and weak pollution control permit for the facility, and last year it took the extraordinary step of actually changing state laws to make it easier for Rayonier Advanced Materials to keep polluting Georgia’s largest river. It is actions like these that cause critics of the agency to take the word ‘protection’ out of EPD’s name and refer to it instead as the Environmental Permitting Division.”

GWC alleges 60 million gallons of wastewater discharged into the river daily discolors the river and creates a foul smell.

In a letter to the editor in December 2017, Clay Bethea, general manager of the plant, said the company’s “devoted over $70 million to smarter technologies that improve environmental protection, reducing color by two-thirds since 2008.”

Regarding the St. Marys River, they note the loophole that allows dumping of coal ash at $1 per ton while common household garbage costs $2.50 per ton to put into state landfills. The Chesser Island Road Landfill in Charlton County, they note, received nearly 400,000 tons of coal ash in 2018.

State Sen. William Ligon, R-White Oak, introduced legislation — with bipartisan support — during the last legislative session to charge equal amounts of money for coal ash and common trash, but the bill did not advance out of committee.

Jesse Demonbreun-Chapman, executive director and riverkeeper for the Coosa River Basin Initiative, urged the legislature to act on S.B. 123 when it reconvenes next year.

He said Charlton County alone will miss out on around half a million dollars in revenue next year.

“Coal ash is currently being trucked over Georgia’s borders and landing in our state’s landfills in part because of Georgia Power Company’s undue influence over our legislators,” Demonbreun-Chapman said. “In 2018, the company successfully lobbied for a loophole in a landfill bill that gives the company a potential $12 million windfall, and artificially deflates the cost of disposing coal ash in Georgia landfills. This loophole was highlighted in last year’s report, but the loophole actually went into effect this year.

“The victims are local governments and residents of counties with a landfill accepting coal ash who are not receiving the money that they should be to help mitigate the issues of these landfills.”

GWC also took note that the EPA, the Justice Department and Hercules are continuing with the lowest-cost option to addressing the Terry Creek site, despite near-universal condemnation of the agreement by local elected officials, along with resolutions passed and amici briefs filed by the city of Brunswick and Glynn County calling for total cleanup.

“Long a polluted burr in the side of residents in Glynn County, things got worse this year when the U.S. Environmental Protection Agency went against recommendations of local governments and agreed to the cheapest proposed cleanup plan for this toxic site,” Cook said. “EPA’s preferred plan will thwart local desires to redevelop the area and keep toxins in place that will continue to contaminate fish and wildlife.”