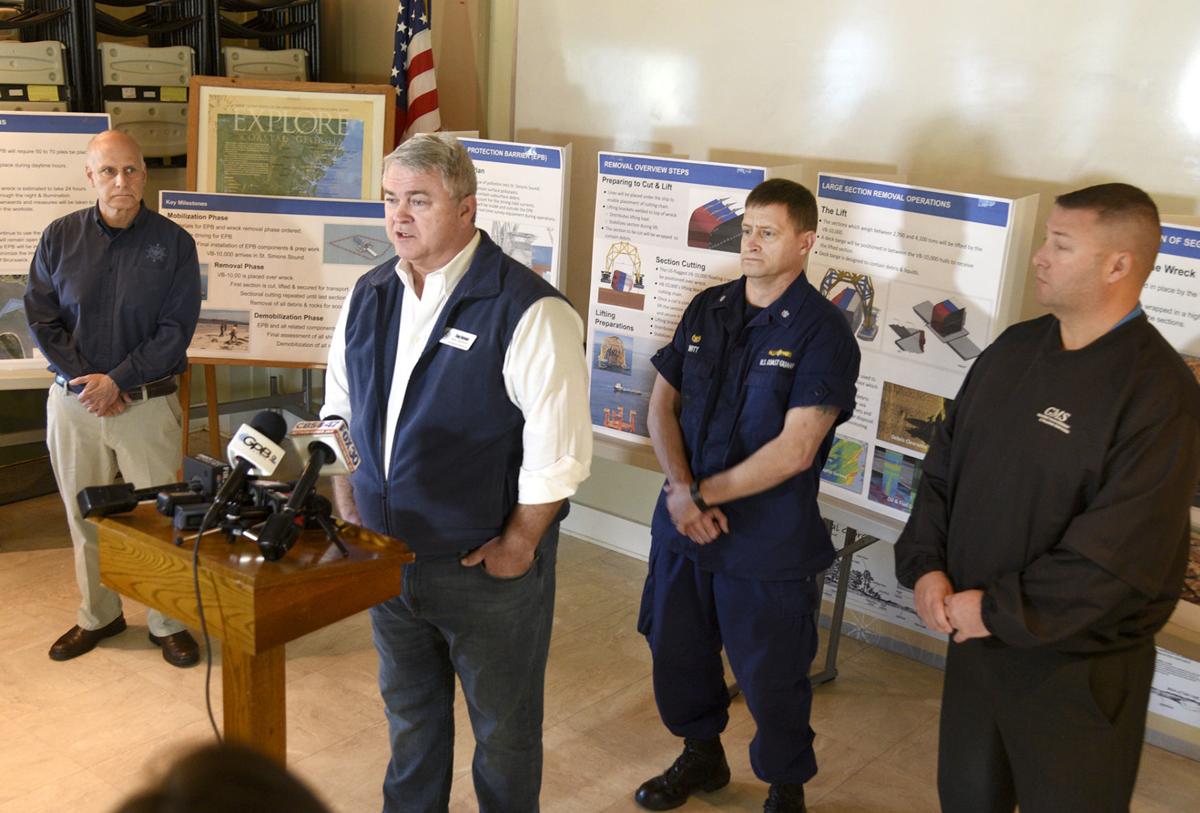 Georgia Department of Natural Resources state on scene coordinator Doug Hayman addresses members of the media Friday during a press conference held to discuss an environmental protection barrier to be built around the motor vessell Golden Ray. Looking on is Jim Elliott with T&T Salvage, from left, Coast Guard federal on scene coordinator Cmdr. Norm Witt, and incident commander for the responsible party Kevin Perry. 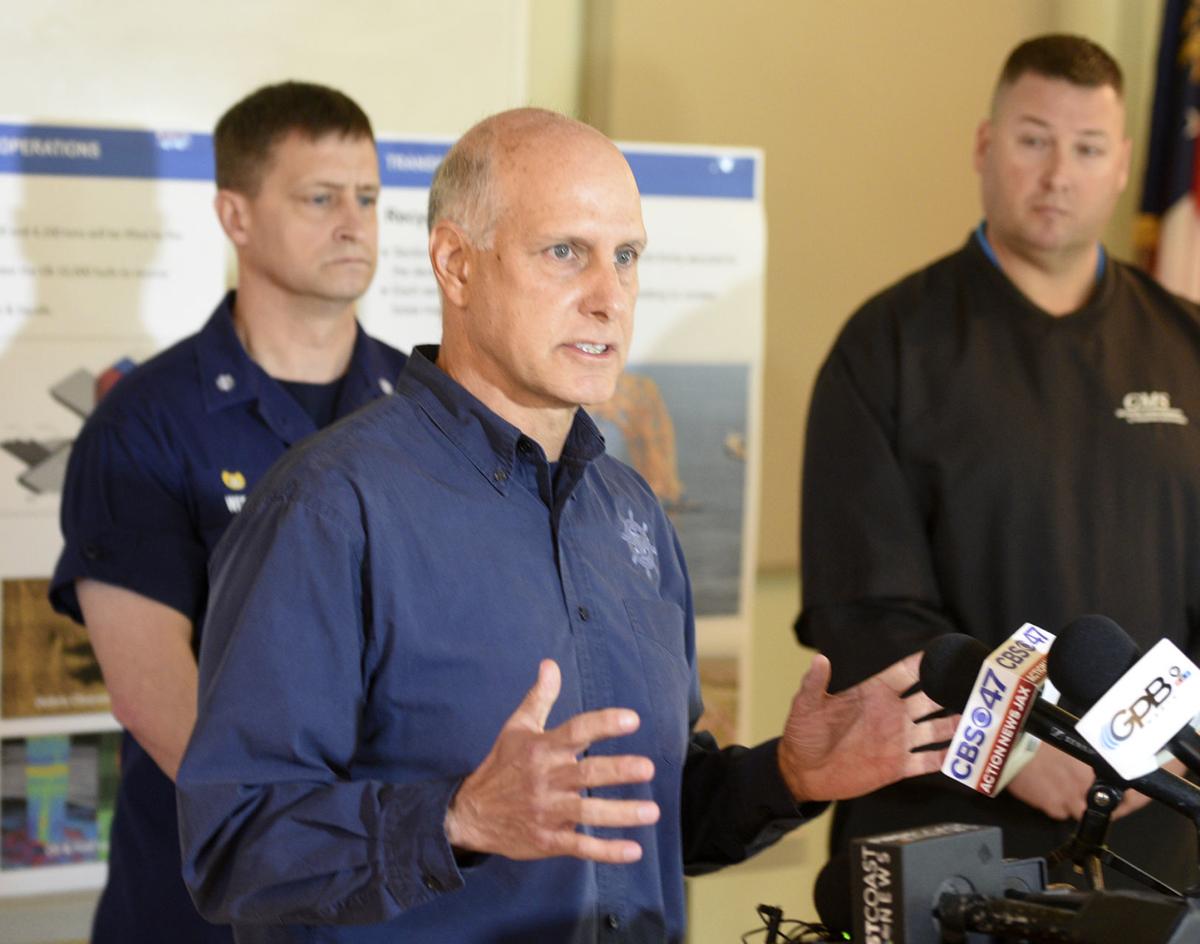 Jim Elliott with T&T Salvage addresses members of the media Friday during a press conference held to discuss an environmental protection barrier to be built around the motor vessell Golden Ray. Looking on is Coast Guard federal on scene coordinator Cmdr. Norm Witt,left, and incident commander for the responsible party Kevin Perry. 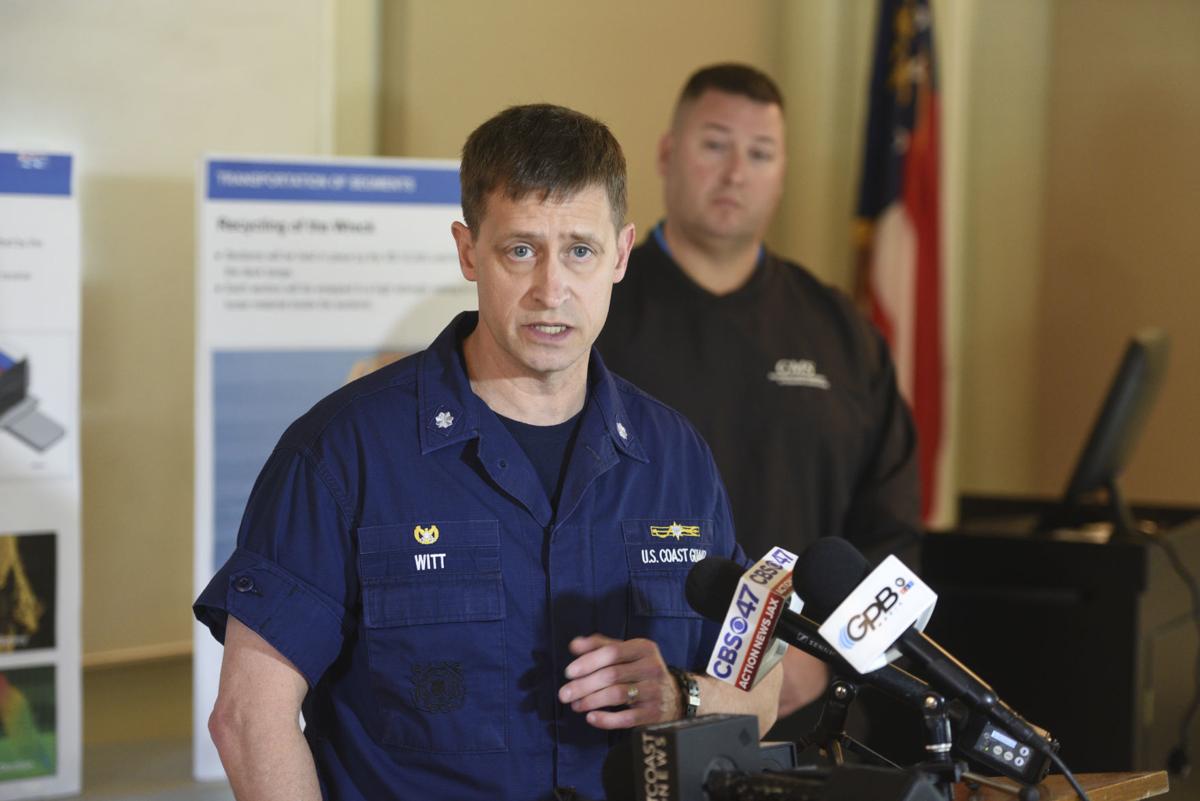 Georgia Department of Natural Resources state on scene coordinator Doug Hayman addresses members of the media Friday during a press conference held to discuss an environmental protection barrier to be built around the motor vessell Golden Ray. Looking on is Jim Elliott with T&T Salvage, from left, Coast Guard federal on scene coordinator Cmdr. Norm Witt, and incident commander for the responsible party Kevin Perry.

Jim Elliott with T&T Salvage addresses members of the media Friday during a press conference held to discuss an environmental protection barrier to be built around the motor vessell Golden Ray. Looking on is Coast Guard federal on scene coordinator Cmdr. Norm Witt,left, and incident commander for the responsible party Kevin Perry.

The beginning of the end of the Golden Ray saga could come as early as Feb. 17, when construction commences on a 33-acre net to surround the shipwreck in the St. Simons Sound.

That is about the time that folks within earshot on nearby Jekyll and St. Simons islands can expect to hear a cacophony of pile-driving noise, said Jim Elliott of T&T Salvage, the Texas-based company tasked with removing the 656-foot vessel.

“Timeline-wise, we’re hoping to get the first piling in by mid-month,” he said during a press conference Friday at the Georgia Department of Natural Resources.

Things are expected to pick up quickly from there, said Elliott and officials with Unified Command. The 25,000-ton shipwreck has sat overturned and half submerged for the past five months, capsizing in the dark morning hours of Sept. 8 while heading out to sea with a cargo of 4,200 vehicles.

The plan is to make the Golden Ray disappear within five months. The project calls for cutting the vessel into eight hulking sections and hauling it away. June 1 is the targeted completion date.

But if folks think the sight of the Golden Ray’s humongous starboard side looming high above the sound’s waterline is irregular, well, they’ve not seen anything yet, according to the plans laid out in recent days.

T&T Salvage was hired in January by the ship’s owner to conduct the salvage operation.

Officials hope construction of the massive environmental protection net will be complete before the end of March.

“We hope to complete the environmental protection barrier by next month,” said Elliott, salvage master for T&T Salvage.

The double-layered mesh netting will be supported by 50 to 80 piles, each 140 feet long. The piles will be placed in connected pairs on either side of the net and driven more than half their length into the sound’s sandy bottom. The net is intended to stop vehicles and other debris from spreading into the sound. A floating boom around the surface of the net will catch floating oils and other pollutants.

Then comes the VB 10,000, the colossal floating crane that will do all the tough cutting and heavy lifting. The massive crane will straddle the Golden Ray and compete with the Sidney Lanier Bridge for views of the Golden Isles skyline. With a “hook height” of 178 feet and an overall height of nearly 240 feet, T&T Salvage had to obtain Federal Aviation Administration clearance for the crane, Elliott said.

The Sidney Lanier Bridge has a clearance of 185 feet, though its spans tower to 480 feet.

There are other ways to remove a city-block-long shipwreck from a environmentally-sensitive estuary next to a federal shipping lane and situated between two resort islands, officials said. But after much thought and study, Unified Command and T&T Salvage both concluded their plan is the best for the situation.

The key to the chosen plan is time, he said.

“Multiple plans were looked at and there are strengths and weaknesses to all of those,” Witt said. “Timing was a huge factor. Again, we are in an area that is prone to hurricanes and we’re trying to do everything we can to get the wreck up before the height of hurricane season.”

Officials addressed other concerns about the actions to come in the months ahead. They included environmental threats to the St. Simons Sound and surrounding waters, commercial shipping through the nearby channel and issues regarding the decision to take the chosen path to recovery.

In addition to the double layer of netting and the surface booms, crews and surface skimming equipment will be placed inside and outside the net to address oil pollution throughout the cutting, officials said. These include a large “current buster,” a surface skimming machine that will be situated near the shipwreck during cutting. One of the reasons for the expansive net is to allow crews and equipment inside the perimeter to address pollution issues before they become a threat outside of the net, officials said. The purpose of the two layers of netting is to catch large and small pieces of debris. Primarily, however, the netting is designed to capture any vehicles loosed during the cutting. All of the vehicles contain gas and automotive fluids.

“That’s the whole purpose of the environmental protection barrier,” said Doug Haymans, director of Coastal Resources for the state DNR. “If a car does fall out (of the ship), the mesh is there to contain it, and the floating boom is there to catch any hyrdocarbons and move that into the current buster. Inside and outside the net we will have oil recovery equipment and surface assets.”

Although significant amounts of oil leaked from the Golden Ray in the weeks immediately following the wreck, Haymans said water quality tests indicate the sound has not suffered significantly as a result. Water testing will continue throughout the process, he said.

“Water samples have been taken since the beginning of the wreck,” Haymans said. “Subsequent samples have shown no levels of oil in the water. We’re fairly confident of that result, and that monitoring is ongoing.”

The shipwreck sits just south of the federal shipping channel that leads to the Port of Brunswick. The channel closed completely for several days immediately after the wreck, after which all 24 crewmen, the captain and harbor pilot were eventually rescued from the Golden Ray.

Intermittent delays to shipping have occurred since, Witt said. There may be times in the months ahead when the shipping lane is closed completely for up to several hours, he said. Officials do not anticipate any significant impacts to commerce at the port during the salvage operation.

“As we move equipment in and out, there may be short-term full closures of the channel, and again I would say hours — not days,” Witt said. “But I’m confident that we’re going to be able to continue to move commercial traffic through that shipping lane.”

Lifting blocks on either side of the VB 10,000 will power a diamond-toothed chainsaw, which will be fed underneath the ship to make seven cuts. Each cut will take about 24 hours.

Once started, cutting must be continuous until complete. Folks nearby can expect construction noise around the clock during the cutting process.

Weighing between 2,700 and 4,100 tons each, cut chunks of the shipwreck will be raised by pre-attached brackets and loaded onto a barge for transport to a recycling facility.

T&T Salvage was hired back in early January by the ship’s insurer and its Korean owner, Hyundai Glovis.

“As far as the environmental protection barrier, I would say we’ve tried to put together a lot of lessons learned from a bunch of different salvage operations to construct that design,” he said.

Unified Command consists of the U.S. Coast Guard, the Georgia Department of Natural Resources and the Gallagher Marine Systems. It is responsible for overseeing environmental pollution prevention and mitigation as established by the federal Oil Pollution Act of 1990.