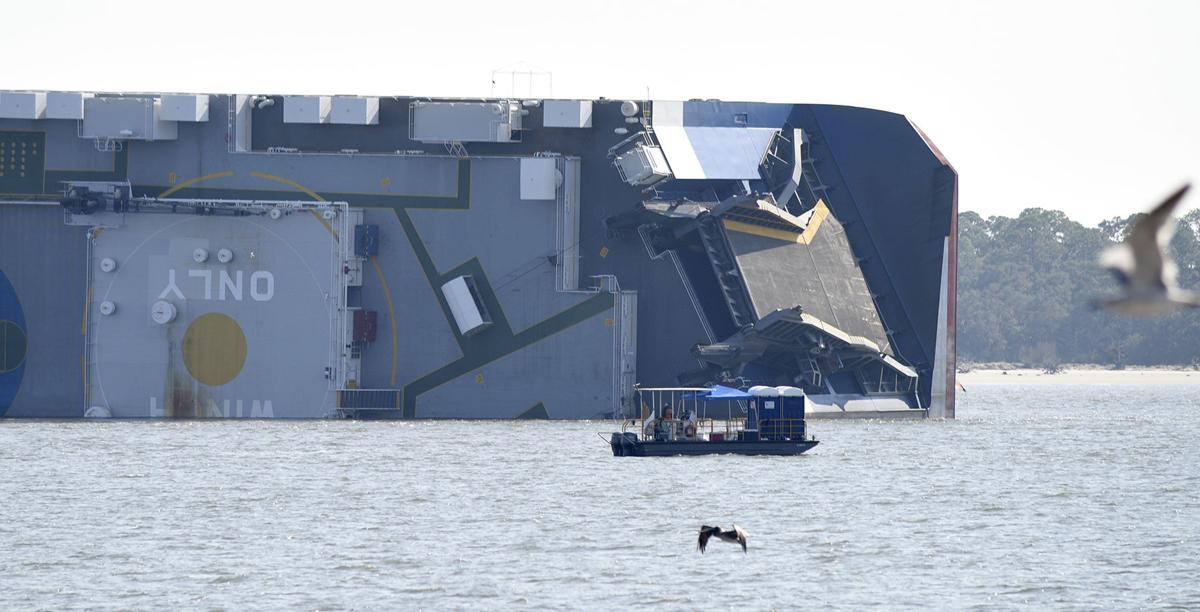 The Golden Ray sits in the St. Simons Sound on Tuesday, more than a week after the car hauler capsized in the sound. 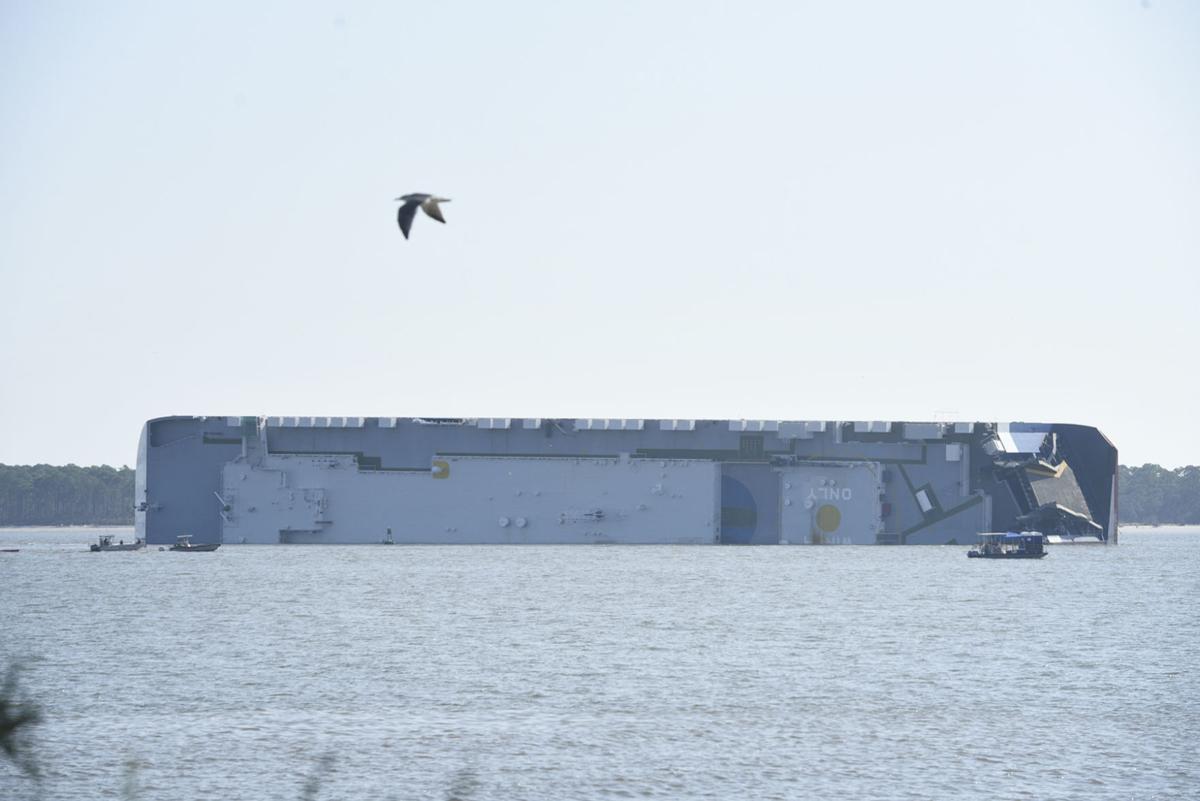 The Golden Ray sits in St. Simons Sound last week. The Unified Command has started the process of removing fuel from the vessel. 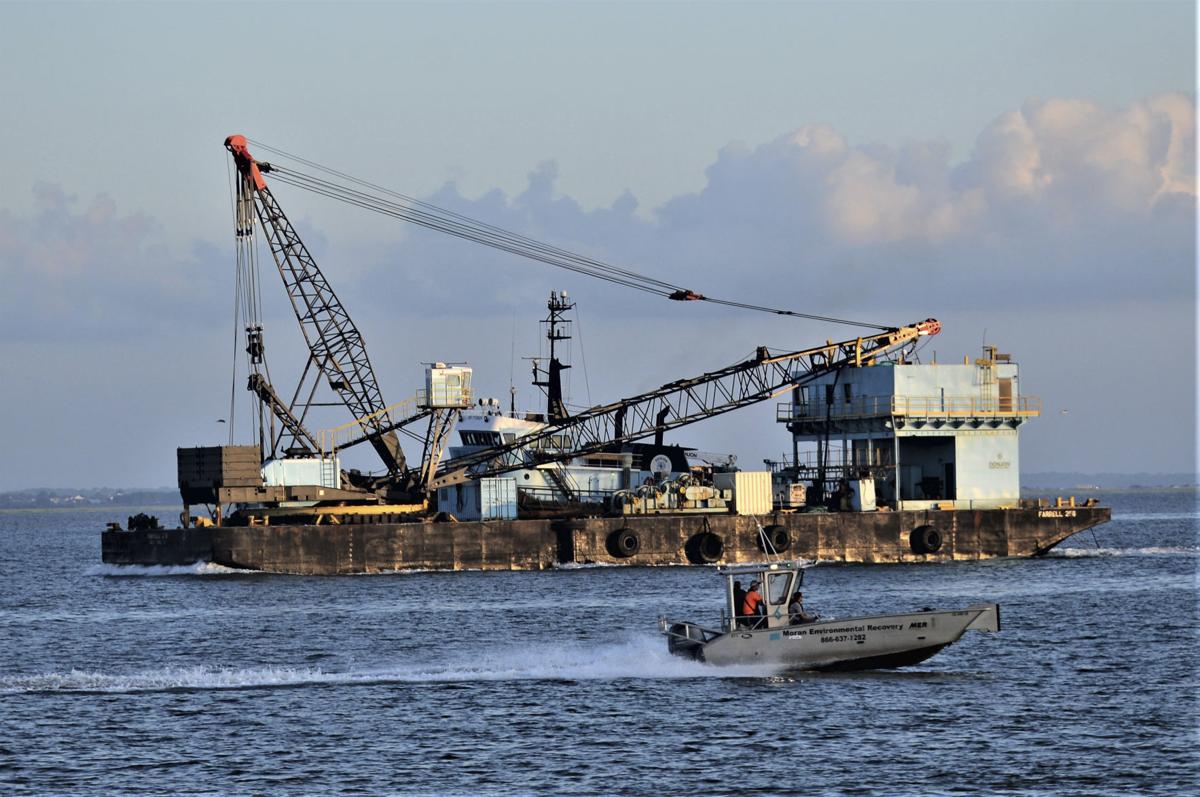 A Moran Environmental Recovery boat crosses paths Sept. 12 in the Brunswick shipping channel with the inbound Farrell 256, a crane barge owned by Donjon Marine Co. Inc., a firm that has carried out major salvage operations.

The Golden Ray sits in the St. Simons Sound on Tuesday, more than a week after the car hauler capsized in the sound.

The Golden Ray sits in St. Simons Sound last week. The Unified Command has started the process of removing fuel from the vessel.

A Moran Environmental Recovery boat crosses paths Sept. 12 in the Brunswick shipping channel with the inbound Farrell 256, a crane barge owned by Donjon Marine Co. Inc., a firm that has carried out major salvage operations.

A towering crane has been visible over the shipwrecked Golden Ray since Saturday morning, less than a week after the 656-foot freighter toppled on its port side in the St. Simons Sound during the predawn hours of Sept. 8.

With the exception of a break on Sunday to allow potentially-hazardous turbulent wind conditions to subside, the crane has been busy every day since. The Farrell 256 crane barge is being used to deliver work crews, divers, supplies and tools to the site as the beginning stages take shape in the effort to safely get the gargantuan ship out of the sound, said spokesman Luke Pinneo, a Chief Warrant Officer with the U.S. Coast Guard.

The massive salvaging operation is being headed by Donjon Marine Co. Inc., a company headquartered in Hillside, N.J., that specializes in solving complex and large-scale maritime calamities such as the one now foundering in local waters. That said, Coast Guard officials say the view of the Golden Ray’s massive starboard side sticking out of the water between St. Simons and Jekyll islands could be visible the watery horizon here for some time to come.

In these early stages, salvaging experts are as concerned with what not to do as they are with how best to proceed, Pinneo said. Protection of the local waters and marine life from pollutants is the paramount objective, and the overall scope of the project must be painstakingly planned out from start to finish before the heavy lifting begins, he said.

“At the top level right now you’re looking at removing pollutants and protecting the environment,” Pinneo said. “And, ultimately, the question turns to, how do you remove the vessel? It’s a complex question, and it really requires a long-term solution. It takes time to get the plan down.”

Norm Witt, Coast Guard Commander and Captain of Ports from Brunswick and Savannah, said last week that salvagers hope to remove the 25,000-ton Golden Ray in one piece.

The Golden Ray was headed out of the Port of Brunswick with a load of 4,200 vehicles sometime after 1:30 a.m. the morning of Sept. 8 when it began listing heavily to starboard while executing a starboard turn, Coast Guard officials said. The massive ship then rolled over on its port side. Coast Guard officials responding to a 2 a.m. distress call arrived to see thick smoke and flames coming from the exposed starboard side.

The Coast Guard rescued 20 members of the Filipino and South Korean crew over the next several hours before unsafe conditions forced it to suspend the operations. The four South Koreans who remained trapped on board were rescued after being plucked through a hole cut in the ship’s hull Monday afternoon.

Attention quickly turned to pollution mitigation and prevention as well as salvaging of the ship. A Unified Command center has been established in Brunswick, consisting of the Coast Guard, Georgia Department of Natural Resources experts and officials from Gallagher Marine Systems. Gallagher Marine Systems, a Mooretown, N.J.,-based maritime engineering and consulting firm, is working with Donjon on the salvaging and cleanup operation.

Numerous other local, state and federal entities also are assisting, some 170 people total with expertise in the multifaceted aspects of the operation, Pinneo said.

“Because it is so complex, they want to make sure it’s done right from the start,” Pinneo said. “Once you start heading into a situation where there are a lot of unknowns, you want to get the plan right the first time. The plan has to take time, the plan has to be solid.”

Crews have been working since last week to seal off submerged fuel vents on the Golden Ray. The ship has an estimated 300,000 gallons of fuel onboard, not including the fuel inside its cargo of vehicles. Fuel leaks appear to have been minimal thus far, though there have been reports of oily sheens on the water surface near the shipwreck as well as a few citizen’s reports of oily residue in onshore marsh rack.

Coast Guard officials said last week that some 4,300 feet of contaminant-absorbent booms have been placed on the water near the ship and around ecologically-sensitive Bird Island in the sound.

Shipping traffic through the sound opened in a limited capacity Thursday and remains open on a “case-by-case” basis, according to the Unified Command. Recreational boats must remain at least 150 yards away from the Golden Ray and ships of 500 gross tons or more must keep a half-nautical mile distance from the shipwreck, when permitted to pass in or out of the port.

Although many of those involved with the Golden Ray salvaging project have dealt with similar problems before, each presents new scenarios and unexpected dilemmas, Pinneo said.

“Right now, what they’re doing mainly is assessing conditions on the ship,” Pinneo said. “Every incident has an aspect of it that is unique, each has presents new challenges.”