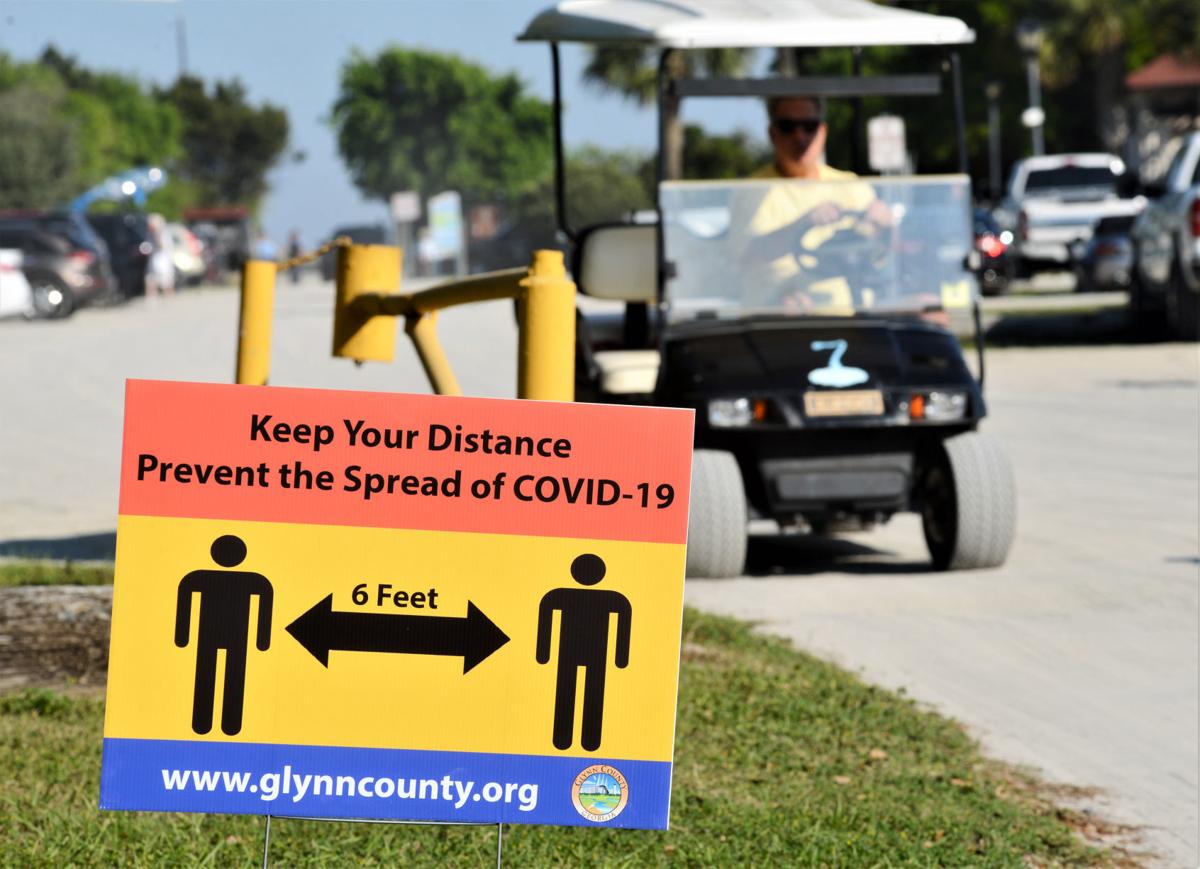 A sign at the Coast Guard station warns that beach goers must keep their distance from each other. 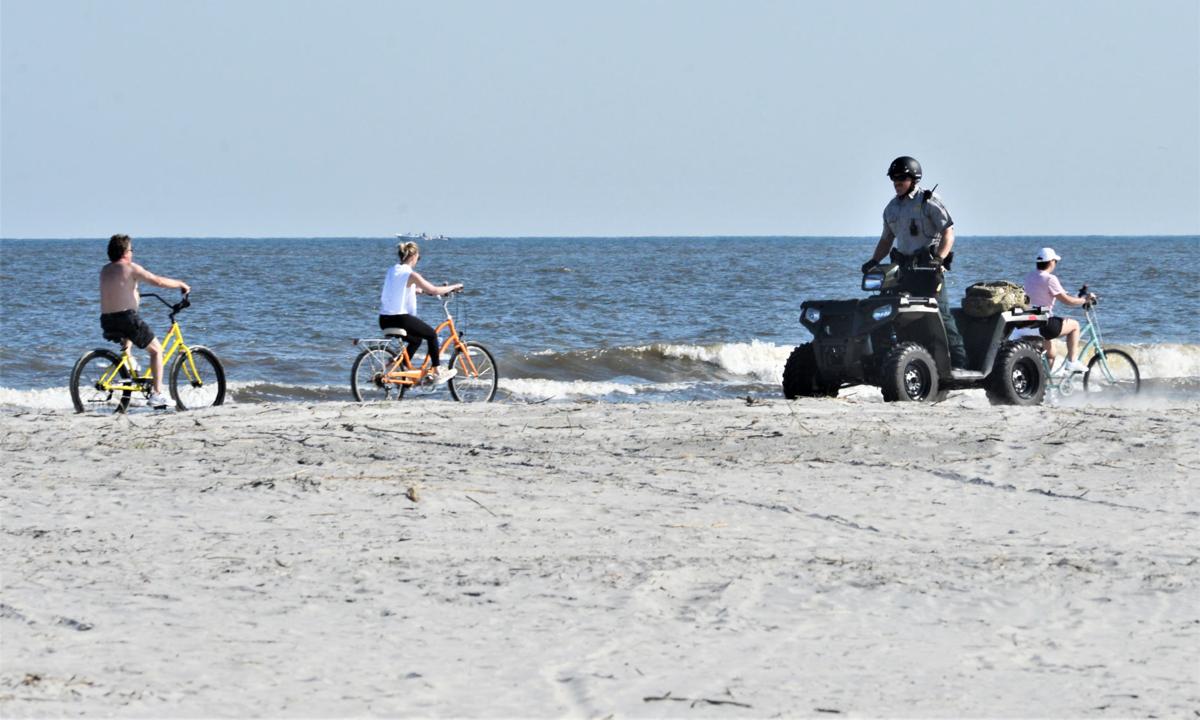 An officer patrols the beach at the Coast Guard station access. 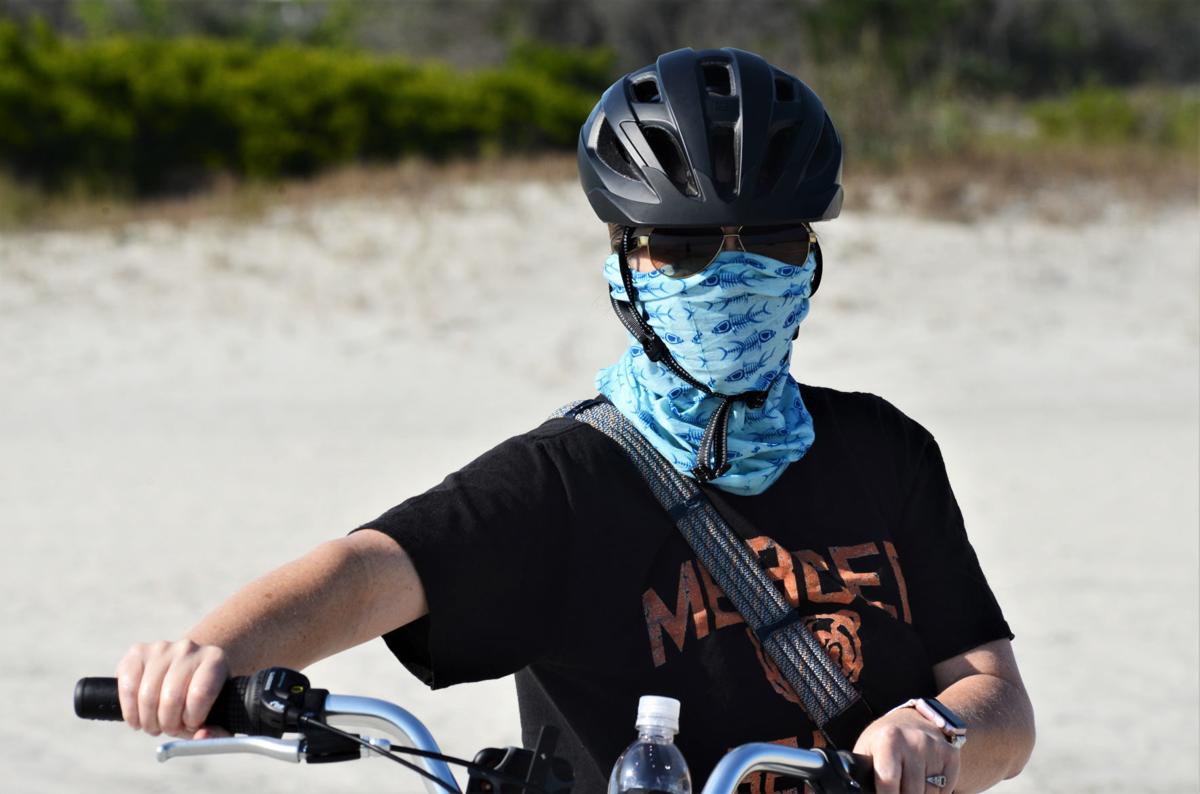 Nancy Snyder wore a bandanna over her face as she rode her bicycle to the St. Simons beach. 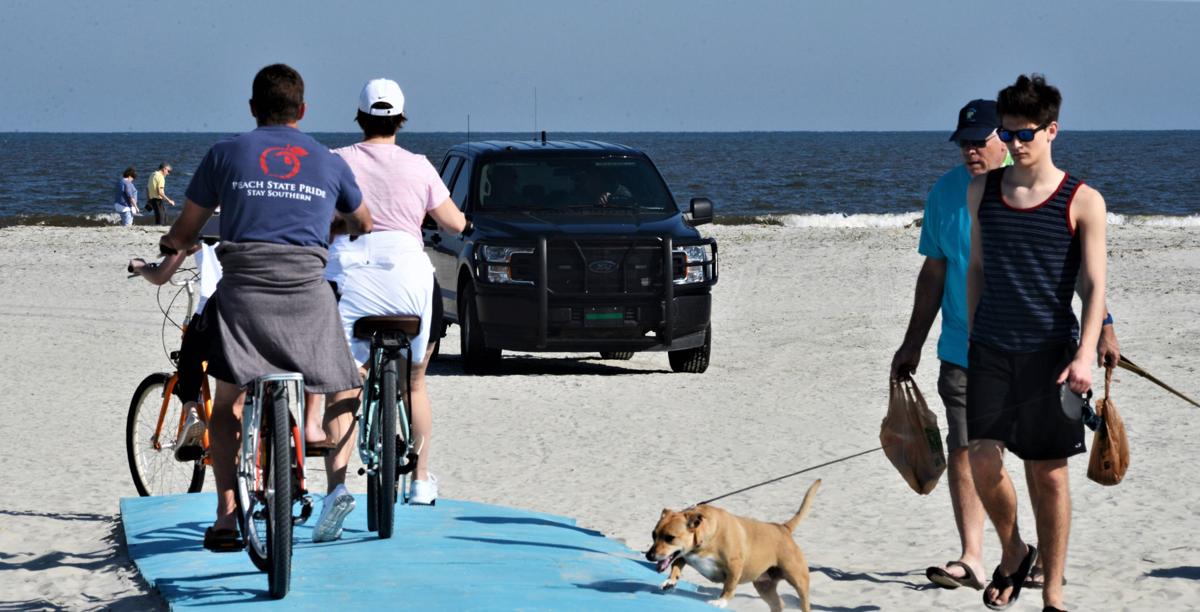 A DNR vehicle comes off the beach at the Coast Guard station on Saturday.

A sign at the Coast Guard station warns that beach goers must keep their distance from each other.

An officer patrols the beach at the Coast Guard station access.

Nancy Snyder wore a bandanna over her face as she rode her bicycle to the St. Simons beach.

A DNR vehicle comes off the beach at the Coast Guard station on Saturday.

Island residents and visitors hit Glynn County’s beaches Saturday, albeit in modest numbers, the day after Gov. Brian Kemp’s executive order countermanded local closures that had been implemented to curb the spread of the coronavirus.

Kemp’s executive order, which took effect at 6 p.m. Friday, not only removed the prohibition on going to the beach, it also removed a moratorium on short-term rentals, both of which the Glynn County Commission enacted.

Beach visitors appeared to abide by a provision that those who weren’t part of the same household remain six feet apart and that they only walk on the beach and not bring any umbrellas, chairs or tents.

At the beach access at the former U.S. Coast Guard station, enforcement was heavy with two troopers, two Georgia Department of Public Safety officers and four Department of Natural Resources rangers monitoring the crossover and riding the beach. Kemp ensured that only state employees enforced the limitations in his order.

Meanwhile, some Glynn County commissioners were frustrated with Kemp’s decision, especially as they were fielding numerous complaints from constituents who wanted the beaches to remain closed.

“If he [Kemp] wants to make that kind of decision, he should have done it at Day 1,’’ said Glynn County Commission Chairman Mike Browning. “Don’t tell the counties of Georgia to make the decisions they need to make to [protect their citizens] then come in there and wipe them out.”

Unfortunately, many people don’t understand how things work and have objected strongly to the commissioners for a decision they didn’t make and are powerless to overrule.

“I tell them to call the governor. They don’t want to hear that,’’ Browning said.

It is even more frustrating, Browning said, because of all the painful discussions on closing off beaches to the public and halting short-term rentals for 30 days.

Murphy said he has a daughter, son-in-law and grandchildren in California where the coronavirus has not been as widespread as other states possibly because of stringent shelter-in-place orders.

The intention of forbidding short-term rentals was to prevent people who live in hotspots like New York, New Jersey, New Orleans and Atlanta from coming to St. Simons. The county also went so far as to order Sea Island’s beach closed because people weren’t abiding by social distancing guidelines.

“Forty-eight hours later the governor undid all of that,’’ and rescinded the safeguards the county had implemented since March 1, he said.

“Now the word’s out,’’ that St. Simons is open, Murphy said, and he fears an influx of people now that Georgia has the attraction of being possibly the only public beach open on the east coast.

Benji Bennett said he already has had a lot of requests to rent at his company, Georgia Beach Rentals, where he also manages income property for people who don’t occupy their houses full time.

Bennett said by Saturday morning, he already had 35 emails from people who own vacation homes on St. Simons who had heard the beach was open.

“I’ve got people from New York who are dying to come down to houses they own and pay taxes on and ride this thing out,’’ he said.

Bennett said he has tried to persuade them to wait until summer because restaurants are closed to sit-down dining, groceries stores are sparsely stocked at times and the beach is open only for those who keep moving.

Meanwhile, Bennett said, he is losing hundreds of thousands of dollars and has had to lay off employees. Bennet said he believes the short-term rental moratorium is the right way to recover.

He had wanted to take the pain of loss revenue now in hopes that by June 1, things could open back up.

“I feel like this is going to hurt us in the long run,’’ Bennett said. “June 1 isn’t going to be our rainbow. I think this is going to run [the recovery] out a lot longer’’ if carriers arrive from hotspots.

He acknowledged, however, that some in his business are very happy with Kemp’s order and “think it’s business as usual.”

He also said he’s seen evidence of a lot of abuse of Kemp’s order opening the beach only for exercise.

“People are playing volleyball, standing around drinking beer,’’ he said.

Nancy Snyder and her son Paul Kaselak came to the beach Saturday but were surprised to find it open after riding their bikes from the Harrington community.

Snyder, who works in health care, rode with a cloth face mask.

Snyder said she doesn’t mind the beach being open for exercise, but said, “I think they need to monitor this.”

Chris Brazell was on the beach with his wife Heather, son Chatham, daughter Chance and a friend, Cole Morris, walking from one end to the other and back around 5 p.m. when the crowd had thinned. Brazell owns about a dozen Subway franchises and said he had to close four Friday so he understands the pain the coronavirus has caused.

Brazell said everyone he saw “was doing well’’ and abiding by the restrictions.

“I think they’re doing a good job of patrolling it,’’ Heather Brazell said.

Officers patrolling the beach were dispersing groups, they said.

Falyn Brandon came home to St. Simons from Douglas to be with her family after being laid off at PCC, an aircraft parts manufacturer.

“I didn’t want to shelter in place alone,’’ she said. “I came to spend it with my family.”

She brought Oakley, her rescue dog to the beach for the first time.

There was plenty of parking late in the day at both the Coast Guard station and Massengale, but the access point at Gould’s Inlet was packed with vehicles and some parked along the street.

Workhorse of the Golden Ray salvage grounded in Mexico

After withstanding a raging inferno and wearing out thousands and thousands of feet of wire rigging in a yearlong pitched battle with the shipwrecked Golden Ray, the VB 10,000 departed victorious late last year from the St. Simons Sound.

Brunswick police are seeking two men in connection with a shootout that occurred after midnight Saturday at the Bamboo Lounge, 2717 U.S. 17, that left one man dead and five others injured.

St. Simons Rocks picks back up after COVID

No, we are not talking about Amazon Prime. Introducing “Subscribe and Save” for Botox and filler by Dr. Diane Bowen at Golden Isles Center for Plastic Surgery. Over the past few years, we have heard from many of our patients that they wish the important self-care routine and wanting to accom…