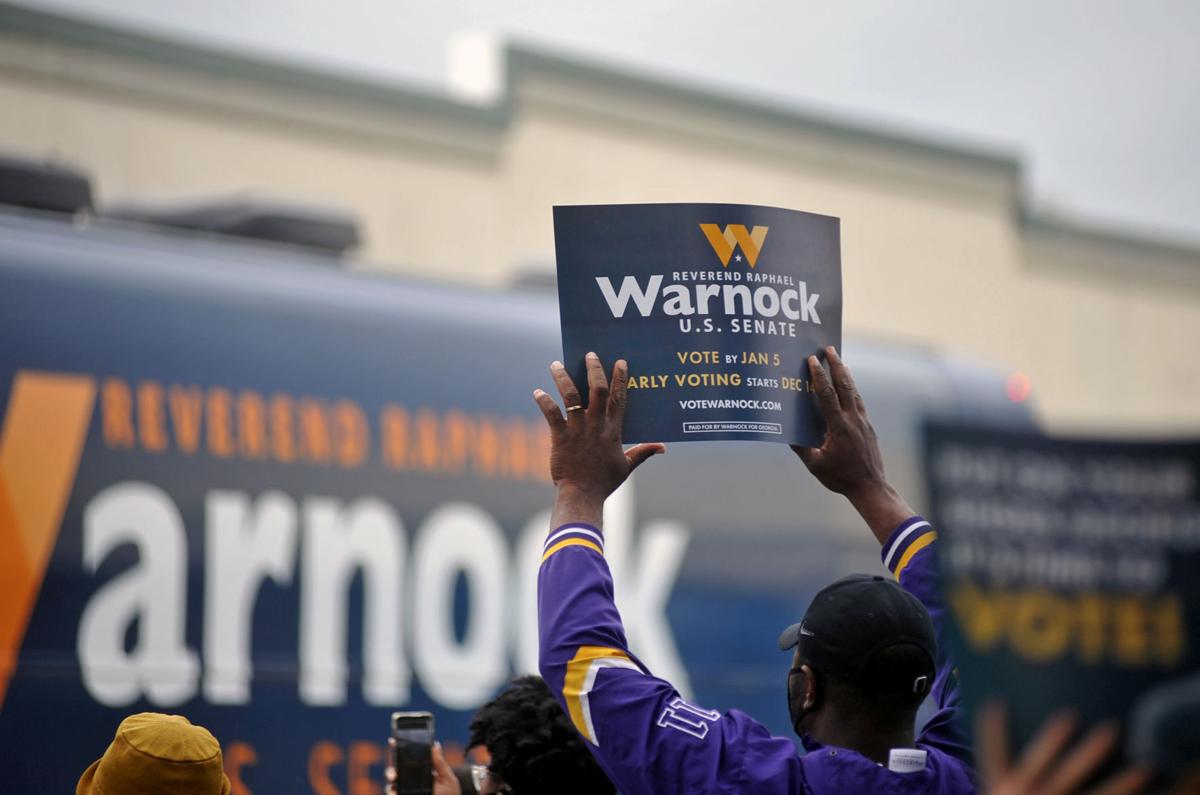 A member of the crowd holds up a Raphael Warnock sign as the candidate’s push pulls into Lanier Plaza. 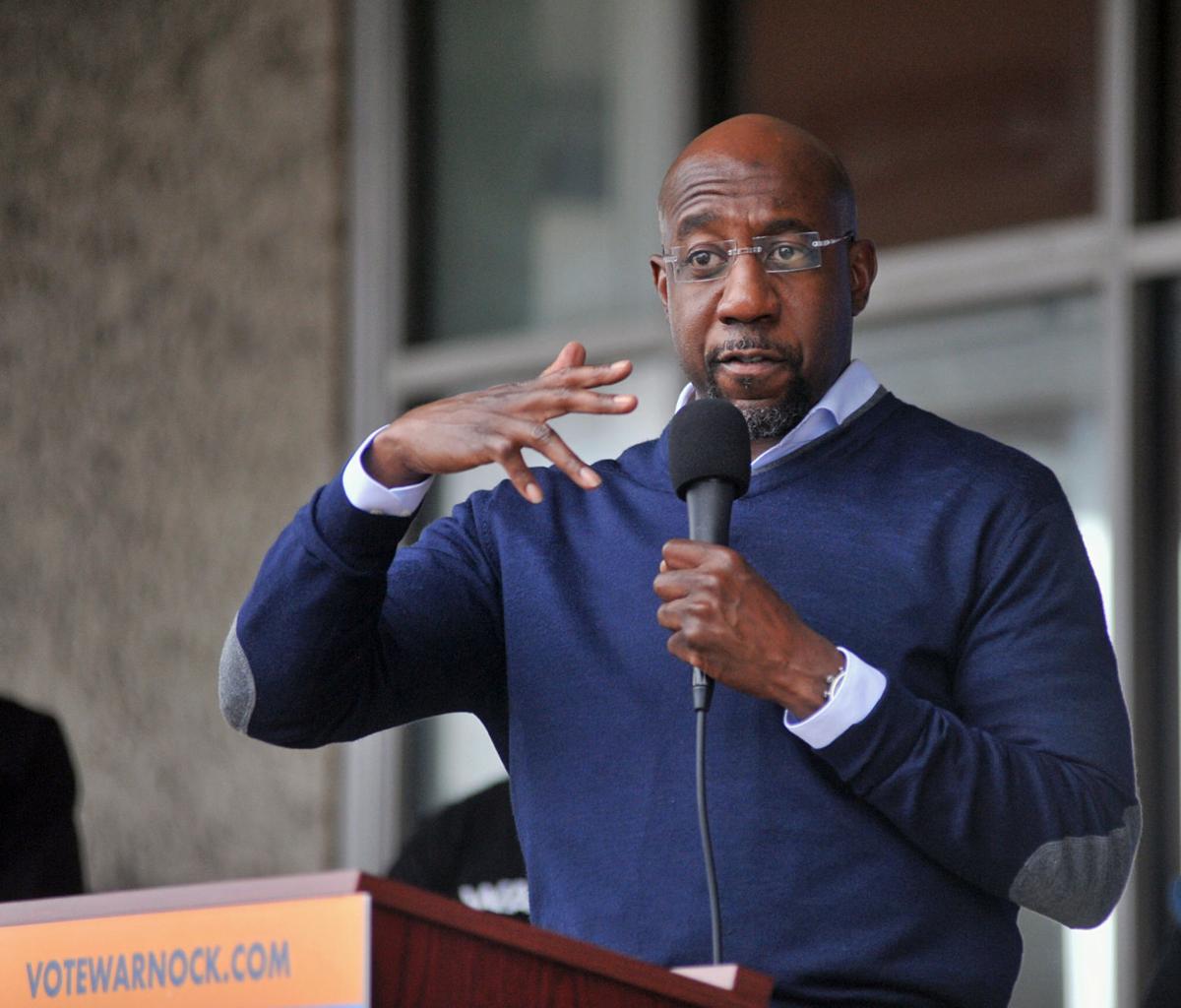 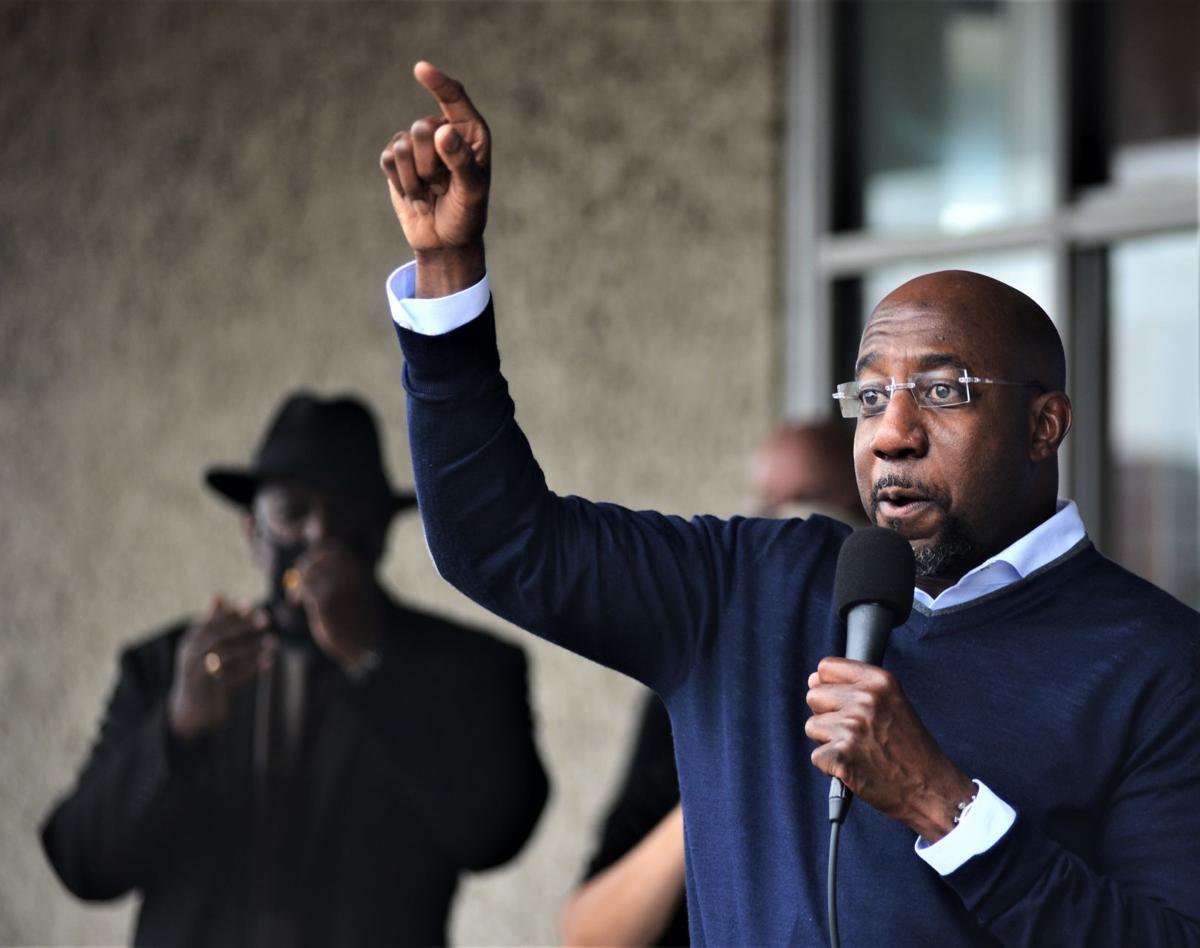 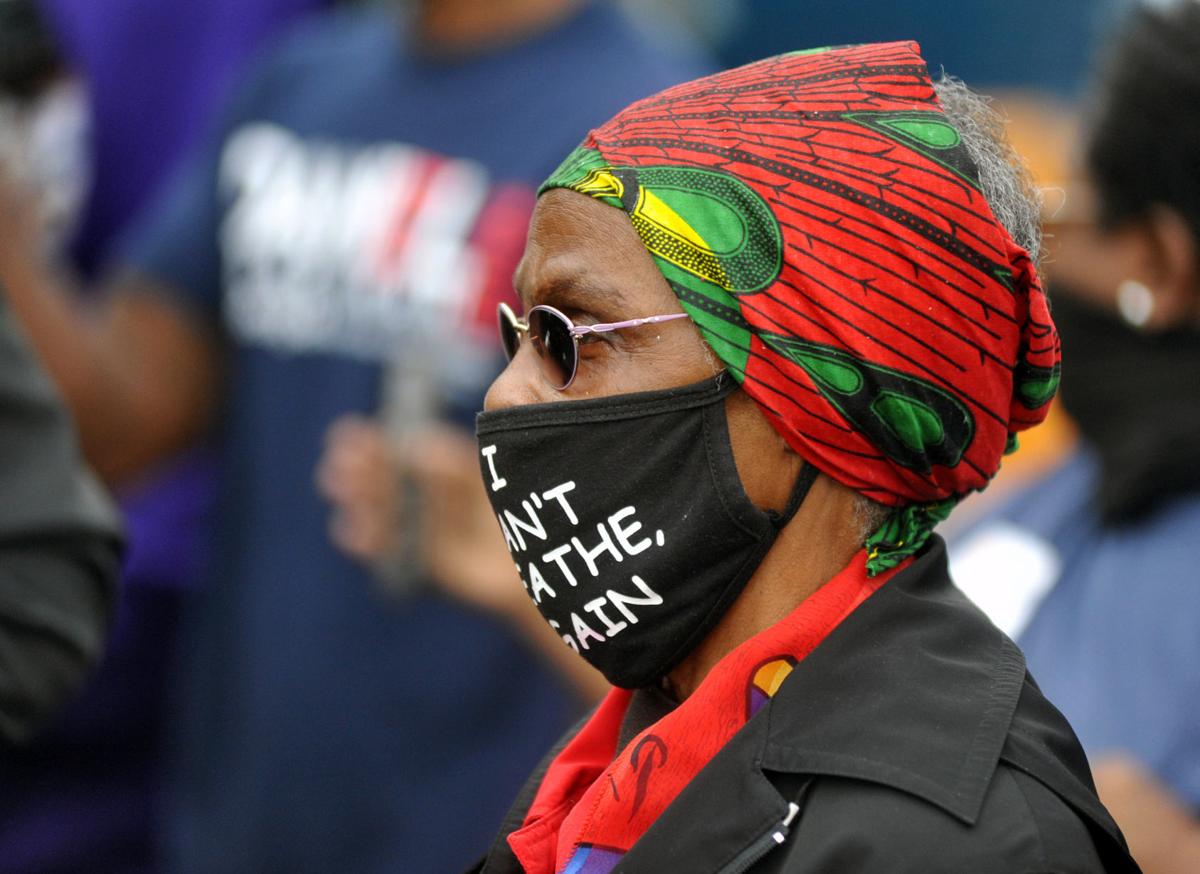 A member of the crowd listens as Senate candidate Raphael Warnock speaks Saturday in Lanier Plaza. 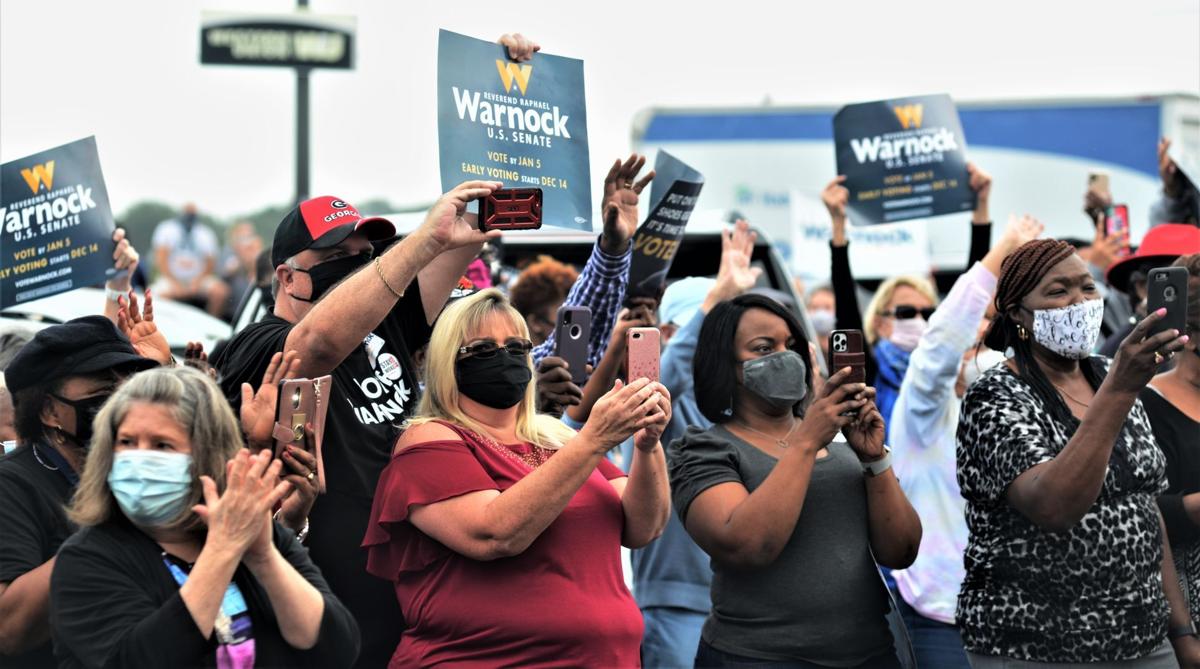 A crowd gathers to listen to U.S. Senate candidate Raphael Warnock on Saturday at Lanier Plaza. 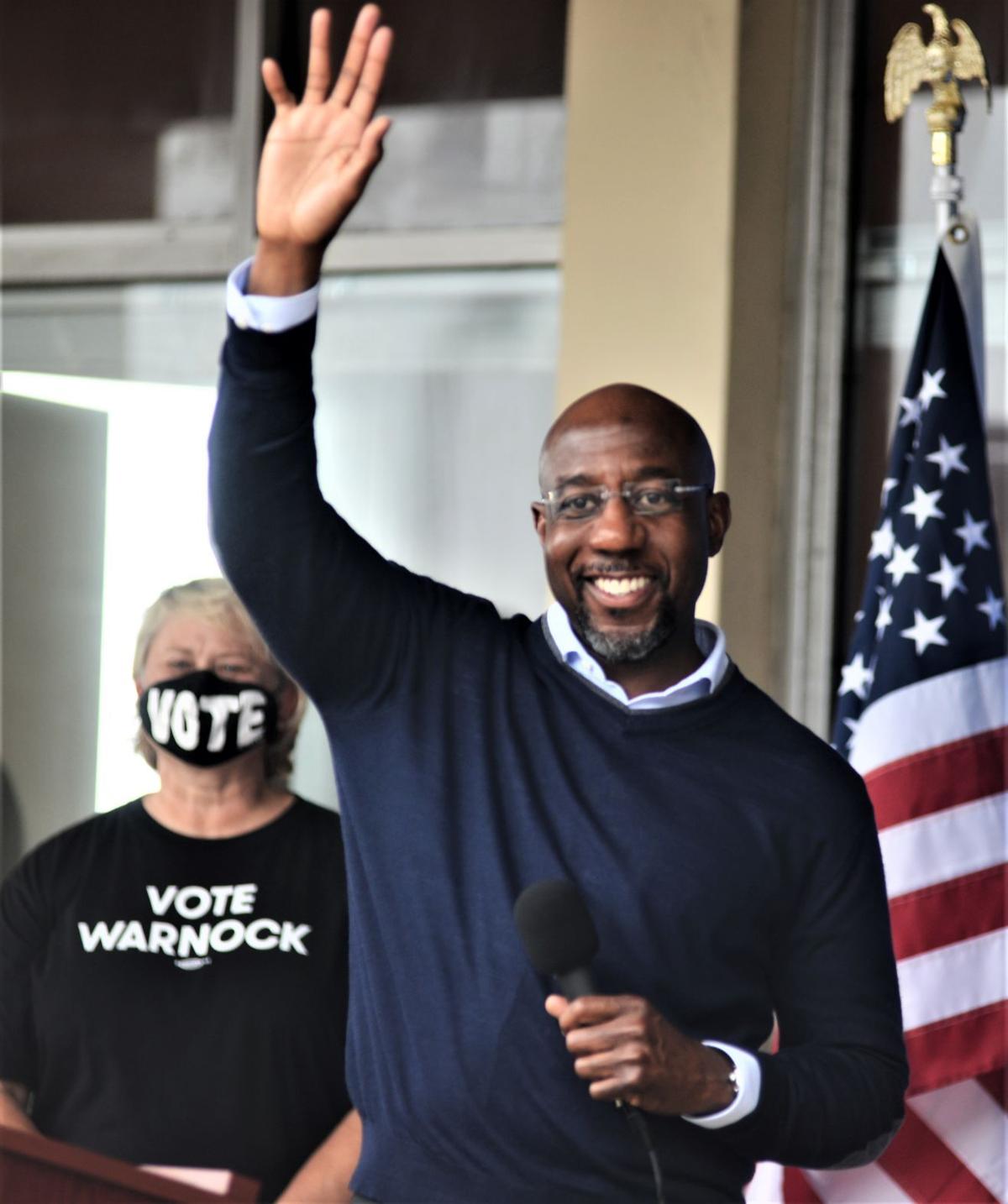 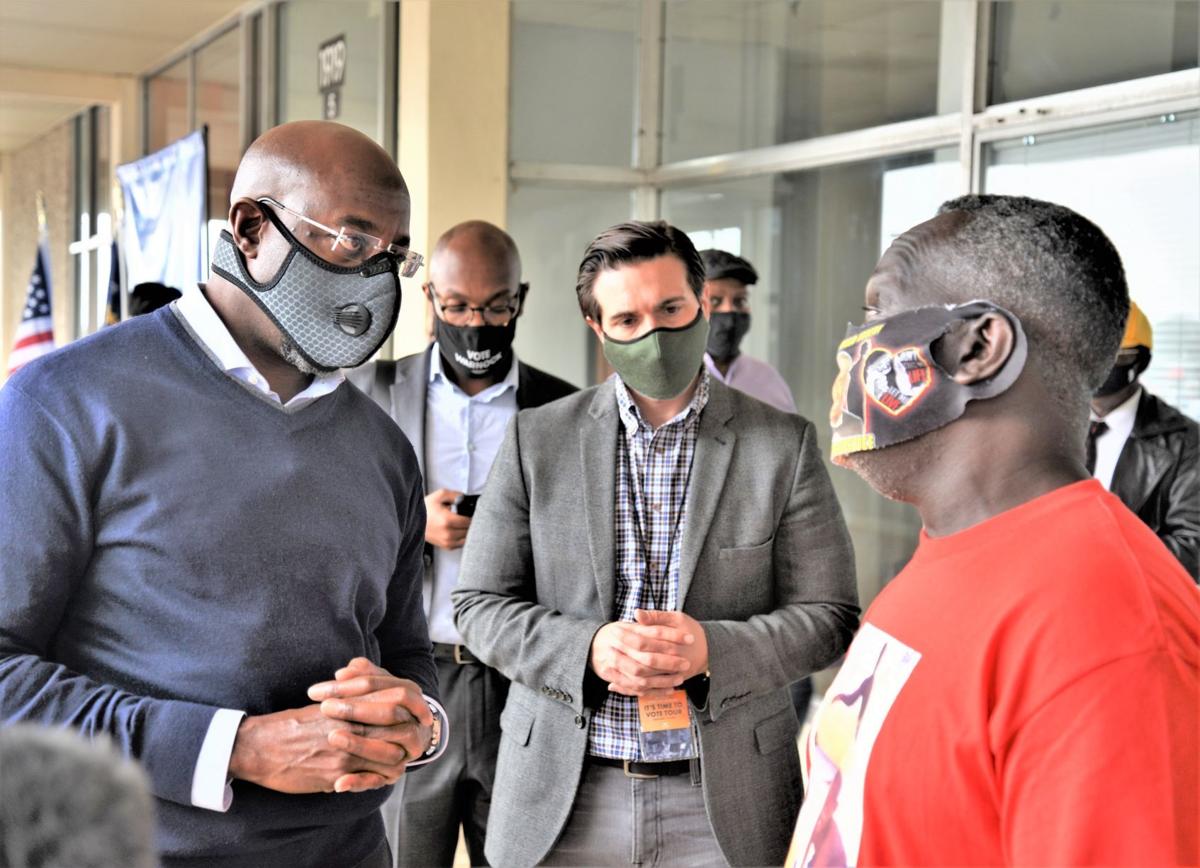 Just before getting onto his campaign bus, Raphael Warnock, left, speaks with Marcus Arbery Sr., the father of Ahmaud Arbery. 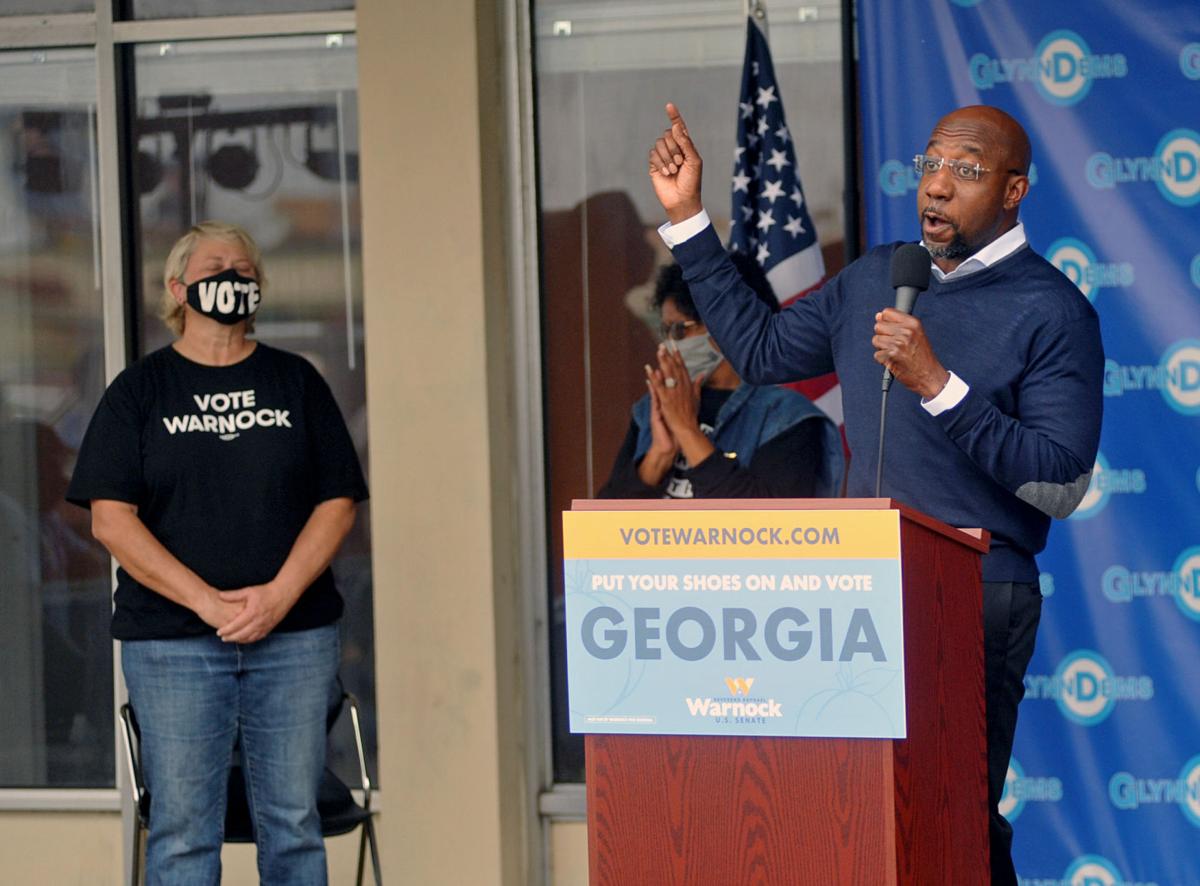 A member of the crowd holds up a Raphael Warnock sign as the candidate’s push pulls into Lanier Plaza.

A member of the crowd listens as Senate candidate Raphael Warnock speaks Saturday in Lanier Plaza.

A crowd gathers to listen to U.S. Senate candidate Raphael Warnock on Saturday at Lanier Plaza.

Just before getting onto his campaign bus, Raphael Warnock, left, speaks with Marcus Arbery Sr., the father of Ahmaud Arbery.

Before going out to speak to a sizable crowd gathered in front of the GlynnDems office in Lanier Plaza, the Rev. Raphael Warnock explained why he decided to enter the race for one of Georgia’s U.S. Senate seats up for grabs this election cycle.

“My running for United States Senate is a continuation of my life of service,” said Warnock, the Democratic challenger to incumbent Sen. Kelly Loeffler, who was appointed to finish out the term of Sen. Johnny Isakson when he retired in 2019. “This is the work I’ve always done. The only difference is that my name is on a ballot. What I hope to do is to advocate for the work and ideals I’ve been focused on for years.”

Warnock reiterated that message to the crowd Saturday in a speech befitting a preacher at his pulpit. He started off by talking about his south Georgia roots.

“I’m running to be the United States senator for all of Georgia, but this is my part of the state,” Warnock said. “I’m from south Georgia. I’m from coastal Georgia. I know about a Lowcountry boil.”

Many in the crowd raised their hands and cheered when Warnock asked how many have voted already. He thanked them for voting and encouraged those who have already voted to make sure everybody in their circle votes.

“We’ve got work to do,” Warnock said. “It’s not easy to flip a state. We’re pushing against the grain. We’re coming, as they say in my church (Ebenezer Baptist Church in Atlanta), up the rough side of the mountain.”

The speech turned somber as Warnock discussed the COVID-19 pandemic that spread across the globe in 2020.

“We say that elections have consequences. That feels like an understatement this year,” Warnock said. “We’ve learned in tragic fashion that elections are a matter of life and death. Over 340,000 American souls — that’s a lot of empty chairs at Thanksgiving and Christmas.”

Warnock told the crowd he knew what it’s like to walk with people through their pain and struggles.

“Pastors are there with people when they bless their babies,” he said. “I’ve been there when mothers have to bury their babies. I’ve been in the critical care units of hospitals too many times for me to name.”

Warnock has put an emphasis on health care during his campaign. When the Affordable Care Act was being debated, Warnock said he was preaching about the need for health care from his pulpit because he saw it as a “moral scandal that the richest nation on the planet” couldn’t find a way to get health care to all of its citizens.

He said the pandemic has showed us how important it is for everyone to have health care coverage.

“A global pandemic and an airborne deadly disease is teaching us something we already should have known — that if my neighbor coughs, that could potentially leave me in peril,” Warnock said. “That doesn’t make my neighbor my enemy. That just means my neighbor’s destiny and mine are extricably connected. My neighbor may be uncovered, but I’m unprotected.

“The pandemic has taught us that we are as connected to one another as a cough.”

Warnock also took the opportunity to jab his opponent for her stock dealings as the pandemic began to surge, saying that Loeffler dumped $3 million in stock.

“Rather than being focused on you, she was focused on herself,” Warnock said.

Loeffler has denied that she did anything wrong and was cleared by the Senate Ethics Committee in regards to her stock deals. It was the only direct shot Warnock took at his opponent as he focused most of his speech on his background and his service.

Warnock told the crowd about how his parents, a mother who was a sharecropper and a father who was a veteran, instilled a strong work ethic in him from a young age.

He spoke about how the greatness of America was on display as his mother’s hands that once picked other people’s cotton and tobacco were able to go into a voting booth to cast her ballot for her son.

“That’s why I love America because you always have a path to make a great country even greater,” Warnock said.

As Warnock prepared to get back onto his campaign bus, he spoke briefly with Marcus Arbery Sr., father of Ahmaud Arbery who was shot to death in a Glynn County neighborhood nearly a year ago.

Arbery said Warnock didn’t speak specifically about his son’s death but about the importance of a change in Washington.

He did say, however, justice is still needed in his son’s death.

“We’re not going to lay down until we get justice for Ahmaud,’’ he said.

“We are here to support someone who will support us when he gets to Washington, D.C.,” Harvey said. “We will continue to show them that our vote matters. Our vote matters because we’re going to be the ones to turn Glynn County blue. With your help, we’re going to elect a man who is really going to stand for something.”

Just two years ago, the idea for the Saint Simons Professional Group was being developed by friends Cindi Phillips, President of Financial Freedom Enterprises, and Danielle Sunderhaus, a Life Coach, Author and Motivational Speaker. Their idea was to bring a limited group of professional busi…

Many of today’s leaders recognize the importance of hearing the voices of youth.

The Islands Planning Commission will consider whether to support a permit request from Harris Teeter for the construction of a gas station when it meets Tuesday.

Glynn Visual Arts and the Brunswick chapter of the Links, Inc., will commission a new work of public art designed to support unity in Glynn County.