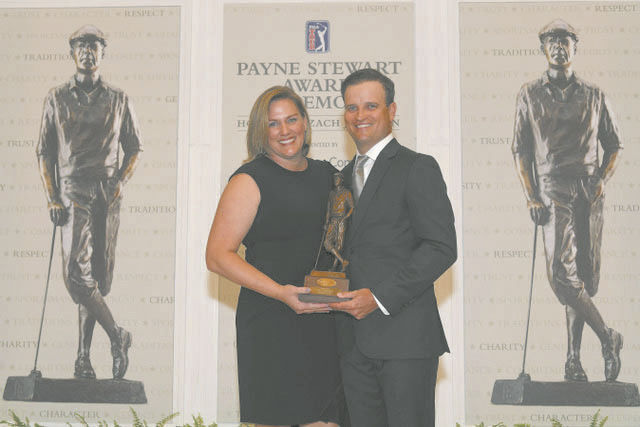 Group photo during The Payne Stewart Award ceremony prior to the TOUR Championship at East Lake Golf Club on Sept. 2, in Atlanta. 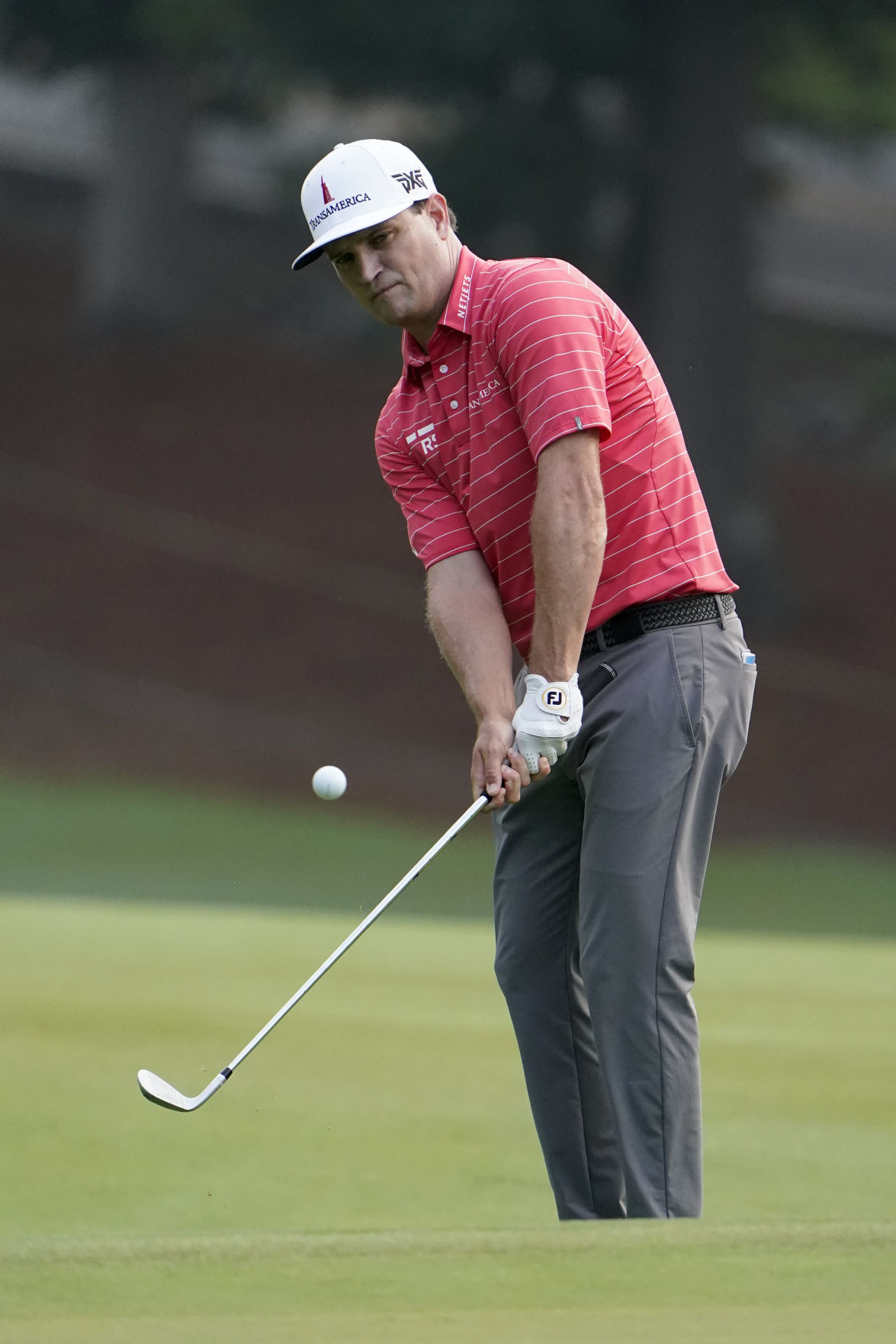 Zach Johnson chips to the green on the 11th hole during the second round of the Wyndham Championship golf tournament at Sedgefield Country Club last Friday in Greensboro, N.C.

Group photo during The Payne Stewart Award ceremony prior to the TOUR Championship at East Lake Golf Club on Sept. 2, in Atlanta.

Zach Johnson chips to the green on the 11th hole during the second round of the Wyndham Championship golf tournament at Sedgefield Country Club last Friday in Greensboro, N.C.

Golden Isles professional golfer and two-time major champion Zach Johnson received the 2020 Payne Stewart award last week. The award is given annually to a golfer who shares hallmark traits that Payne Stewart embodied during his golf career — a remarkable character, an ultimate respect to the sportsmanship of the game and a standing dedication to uphold the long tradition of charitable giving associated with the sport.

Johnson joins fellow Sea Island pro Davis Love III, who won the award in 2008. Throughout his career, Johnson has demonstrated the three traits associated with the award. Whether it’s through his charities in Iowa or just seeing him interact with people in the game, Johnson treats everyone the same.

The Payne Stewart Award is given to a player whose “values align with the character, charity and sportsmanship that Stewart showed.” This includes respect for the traditions of the game, commitment to uphold the game’s heritage of charitable support and professional and meticulous presentation of himself and the sport through his dress and conduct.

Many commended Johnson for his values and talents in a recent article published by the PGA Tour. Kurt Warner, Jonathan Byrd, Brian Harman, Paul Tesori, Kirk Ferentz, Love III, Keith Mitchell, his agent and his wife are among those who shared praise for Johnson.

The famous, “I’m Zach Johnson, from Cedar Rapids, Iowa,” quote, made after he won the Masters in 2007, symbolizes who he is. That story was the one his wife, Kim, shared to describe how, no matter the circumstances, Johnson never forgets where he came from.

The News talked with Kim about how her husband embodies this award. Her answers offer some insight into the Johnsons’ lives.

Can you discuss the efforts/trickery made to guarantee Zach finding out about being named the 2020 Payne Stewart award was a surprise (including you sitting on the Zoom call)?

There wasn’t much trickery involved because Zach is not suspicious by nature. I knew about the award a full week before he did. There were some logistics involved in finding a time that worked for everyone who needed to be on the call, so for us that meant he had to do it when we had a house full of guests. I simply just went into the bedroom and told him I needed a break from everyone (meanwhile they were in on it) and I just sat on the end of the bed and pretended I was scrolling on my phone but I was actually video taping the call.

Once he learned of the incredible honor and leading up to the ceremony, were there some neat moments where he really took in the magnitude of it?

There was no bigger moment than when he found out, he was so overwhelmed and so grateful and completely emotional. He did get the honor of telling his parents which was a special moment because it really is “group effort” on an award like this. He is who he is because of how he was raised. I can tell you though that this award means as much to him if not more than anything he has accomplished on the golf course.

Since the pillars of the Payne Stewart Award are character, giving and sportsmanship, do you mind sharing stories of how you think Zach exemplifies each trait?

I could be here all day telling these stories but I am going to send you a link to a story the tour did where they got 18 different people to tell stories that answer this question.

Fans were able to see the ceremony on the Golf Channel, but were there other festivities associated with the event that were memorable or special?

There was a small cocktail hour before the ceremony when Zach was able to visit with a whole crew of people who had flown in from his hometown just to be there for him. Each of them have played integral roles in his life leading up to this award. After the ceremony we were able to share a meal with everyone who had come in plus the Stewart family, it was a special time to celebrate what the award meant.

At the conclusion of the ceremony, Zach said your name should be on the award because of the partnership the two of you share. What did that mean to you and what would you say is the number one reason your partnership is so strong?

Zach and I are a team and it has been that way since day one. We succeed together and we fail together and we learn from all of it. We are very different in so many ways but my strengths compliment his strengths so that we are definitely better together. The one reason our partnership is so strong is simple, God. We put our relationship with God first in all that we do and that serves as a foundation that is unshakable.

Also during the ceremony, Zach joked that your name also should be on the award because “being married to me ... that’s not easy.” Do you mind sharing some of his quirks that sometimes makes him difficult?

If anyone is difficult it is me! I am much harder to live with than he is!! If I had to name one thing though it would be that he is indecisive. For instance if we are out to dinner he is always the last to order after asking our server a million questions about everything on the menu and then still treats it as if it will be his last meal and everything is riding on this one choice. That pretty much carries over into a lot of life!

During the ceremony, when Zach was talking about his parents, you embraced them by holding their hands. What was it like having them there and getting to see such an accomplishment for their son?

Zach’s parents, and whole family for that matter, are truly some of the best people I know. They have strong midwestern values and they raised a great man. They value me in turn which makes for a really special relationship. I think it meant everything to them to see him receive such a prestigious award. At the end of the day any parent would be proud to raise a championship golfer but I am certain that if they had to chose they would be even more proud to raise a good man.

For the fashionistas out there, who were you wearing at the ceremony?

Oh gosh I will have to look at the tag when the dress comes back from the cleaners!! I really have no idea. It was a dress that was hanging in my closet. I bought it for a wives outing at the 2018 Ryder Cup in Paris.

With Zach being the 2020 Payne Stewart award winner, the Golden Isles now has two residents permanently attached to the award with Davis Love III winning it in 2008. What does that mean to you and Zach?

Davis has always been someone that Zach has admired and looked up to. Anytime you can be named in the same company of someone who is your mentor it is an honor. Davis and Robin took us under their wing when we moved here in 2007 and we love them like family. They are a great example of what loving and giving back to your community should look like.

You and Zach’s foundation is very active back in eastern Iowa, are there some organizations in the Golden Isles that y’all are passionate about?

The short answer is yes, however our public giving is encompassed in our foundation. What we do outside of the foundation and here locally is something we keep fairly private, but there are many organizations in Glynn county doing incredible things.

You and Zach have been living in the Golden Isles for about 15 years now, correct? Beyond the beauty of the area and the goodness of the people, what else makes you know that moving here was a terrific decision for your family?

We moved here in December of 2007. We could not imagine a better place to raise children. It is a tight knit community with ample southern charm. Christian values are still practiced and accepted here. We have developed the deepest friendships since we moved here, we are blessed beyond measure with the people here that surround us and live life along side us.

Finally, more than once during the ceremony, Zach talked about your children being your legacy. Fans get to see Zach’s stellar play on the course and exemplary giving outside the ropes, but what most impresses you about Zach the father?

Zach is an incredibly involved dad. When he is home, he is ALL IN with our kids. He is fun and playful while also being stern and solid. Our kids know they are not just loved by their dad but that they are cherished. Kids want our time more than they want anything else we can give them and he gives them his and they love him for it. He leads our family in faith and he sets an example for the kind of men our boys should aspire to be and daughter should aspire to find in a partner. He is, simply put, a good man.

Living up to its name, Keep Golden Isles Beautiful announced it plans to use a $10,000 grant to pay for landscaping and buy outdoor furniture for Manna House and the future Golden Isles Veterans’ Village.

College of Coastal Georgia students plan to support the creation of a community garden at St. Mary Elementary School.

Wading through the maze known as health insurance can be a difficult task, especially when you’re approaching retirement age, and Medicare coverage is constantly changing. Many people opt to carry only Original Medicare, but insurance brokers, like LaTasha Rozier, owner of LaTasha Rozier Hea…

A welcoming committee of about a thousand folks lined the waterfront Tuesday morning and crowded the St. Simons Island pier, craning their necks as the colossal VB 10,000 plodded its way toward destiny.