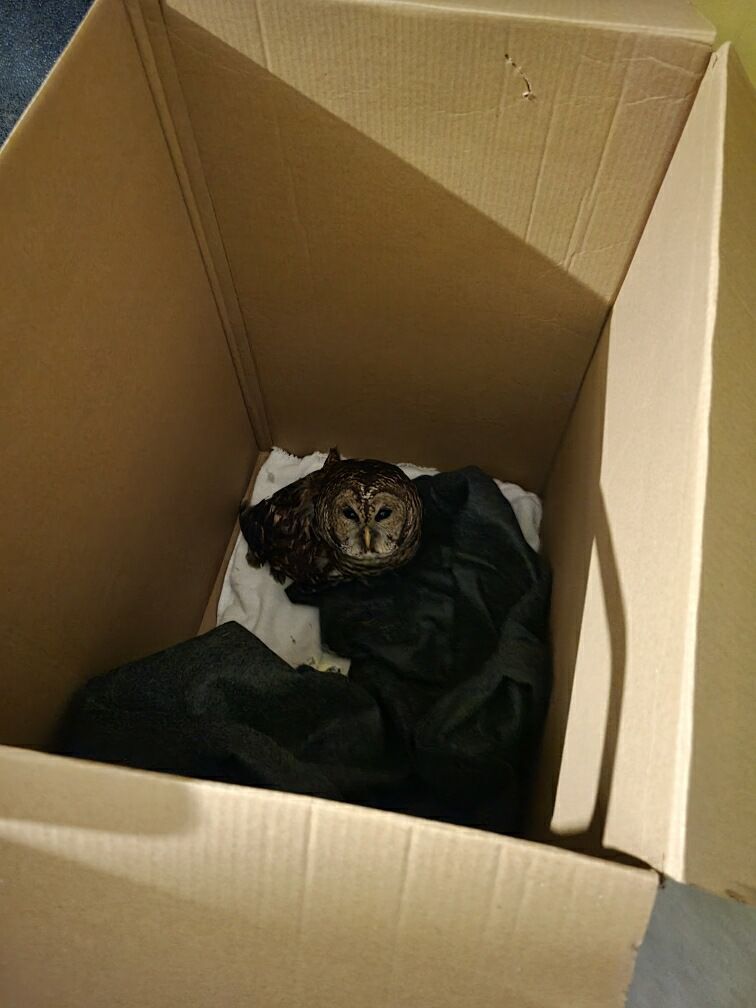 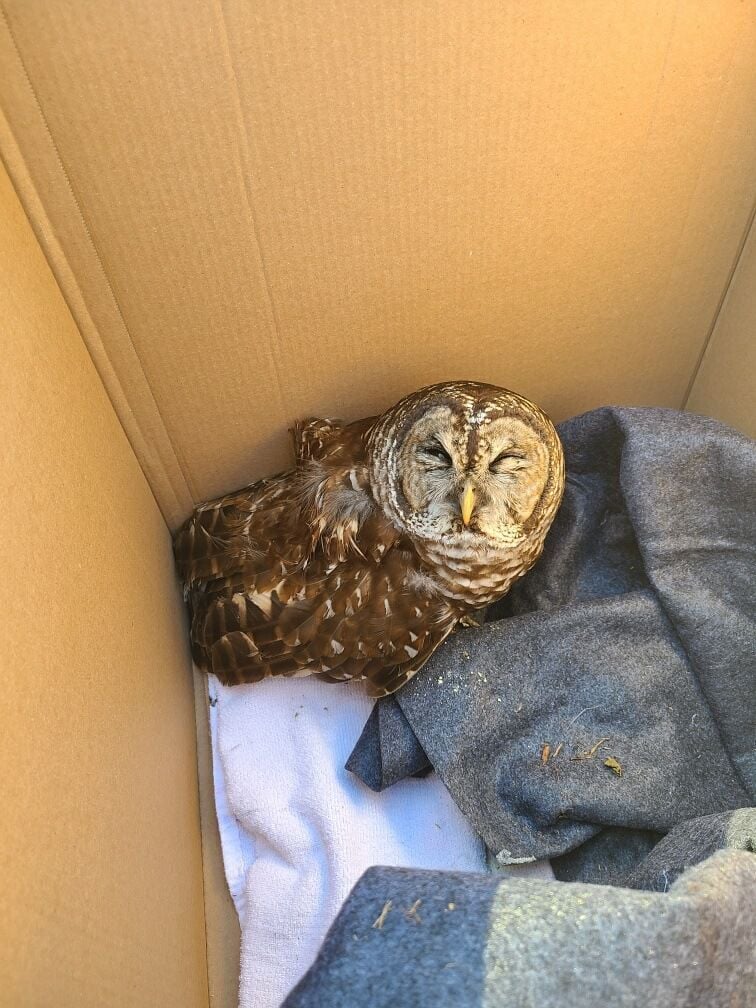 It was a quiet night on the western Glynn County beat for police Sgt. Kevin Jones. Yeah, a little too quiet.

“It was dead, absolutely nothing going on,” Jones recalls of that overnight shift last week.

Then a call came in after midnight Tuesday about a vehicle skidding off the road at Glynndale Drive and U.S. Highway 17. Both the young man driving and his young lady friend were unhurt.

The mysterious character who caused the crash remained on scene, standing beside the road. It was clear the suspect was injured. But as Jones moved closer, the unflappable piercing eyes that stared back at him revealed nothing.

“He just looked straight at me, no expression,” said the 23-year veteran of the Glynn County Police Department.

Jones asked fellow officer James Lewis to provide him with cover. Then Jones made his move. “He tried to fly off, but his wing was clearly broken, and he went back down and walked around a little.”

Undeterred, Jones doubled back and approached from the blindside. And that is when he managed to get the cover over the wounded owl.

“I was able to get that blanket over him,” Jones said. “And as soon as I got the blanket on him, the bird was calm and relaxed.”

That made one of them.

“I was a nervous wreck,” Jones said.

So what does a police officer do once he gets a wounded barn owl in custody in the middle of the night shift? Jones was not quite so sure either. But leaving it crippled and alone to face the elements was not an option.

A former member of the Glynn County Police Department’s HEAT (Highway Enforcement of Aggressive Traffic) squad, Jones moved to the department’s night shift after his promotion to sergeant a few weeks ago.

Jones and K9 officer Lewis encountered a vehicle in the ditch when they arrived to that late night report of a crash at Glyndale Drive and U.S. 17. The young couple inside were unharmed.

They had driven upon an injured owl standing in the middle Glyndale Drive. They pulled over to determine if assistance could be rendered, but the vehicle’s tires kept sliding into the ditch on soil that was made soggy from the recent rains.

Also, the two were still concerned about the owl. Jones looked.

“The owl was sitting close to the street now,” he said. “You could tell its wing was broken.”

They called a wrecker to get the couple’s vehicle out of its jam. Then there was the matter of the owl. Jones is no expert, but he knows owls are birds of prey, night stalkers with piercing sharp talons and flesh tearing beaks. He asked Lewis for one of the blankets he keeps for Roxy, his canine partner.

“Those talons are for real,” Jones said. “They could have shredded me. He doesn’t know me from friend or foe — just some big lug trying to pick it up.”

Once the owl was secured and calm, instinctively Jones put the bird in the backseat. Although ideal for holding bad guys, Jones knew his back seat would need reinforcements to hold this bird. The clerk at the Parker’s convenience store at Ga. 99 and U.S. 341 could not have been more accommodating, he said. Jones now had a big box to provide even more comfort for the owl.

The obvious place for an injured owl in these parts is the Georgia Sea Turtle Center on Jekyll Island, which dedicates a wing of its facility to treating and rehabilitating birds of prey. Not surprisingly, the turtle center does not receive visitors at 2 a.m.

The next thing you know, Jones is gently nudging his wife Candice from deep slumber: There is an owl in a box in the garage, honey. Don’t let the dog or the cat in there. After another night-night kiss for Candice, Jones was back on patrol.

“I checked on the owl a couple of more times through the shift,” Jones said. “He was awake and alert — just staring at me.”

Not long after sunup, with his patrol shift ended, Jones drove the owl over to the turtle center. The folks at the center were gracious and thankful, and immediately took the owl into surgery.

“The first person I met there was Stephanie, and she was so nice,” he said. “She said, ‘Thank for taking the time to bring this injured bird to us.’”

After all the effort expended, this story begs for a happy ending. But that was not to be. Jones learned Thursday from the center’s staff that the poor owl’s injuries were more extensive than presumed.

“X-rays showed it had a fractured spine as well,” Jones said. “It had to be euthanized. That bummed me out. I was looking forward to seeing it fly back into the wild again,” he said.

Still, should an incident involving wildlife in distress present itself in the future, Jones is prepared to go the distance once again.

“I’ve made a commitment to serve and protect the members of this community,” he said. “And that goes even for the ones with feathers — and sharp talons.”