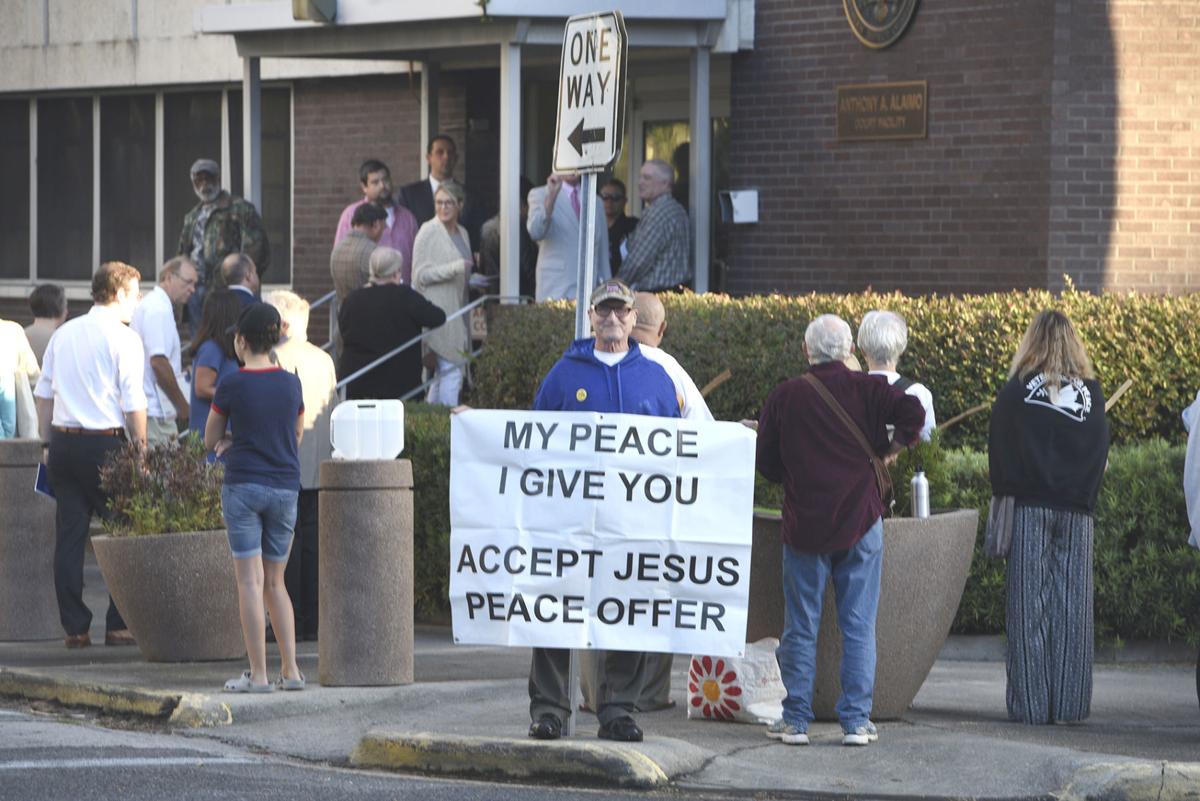 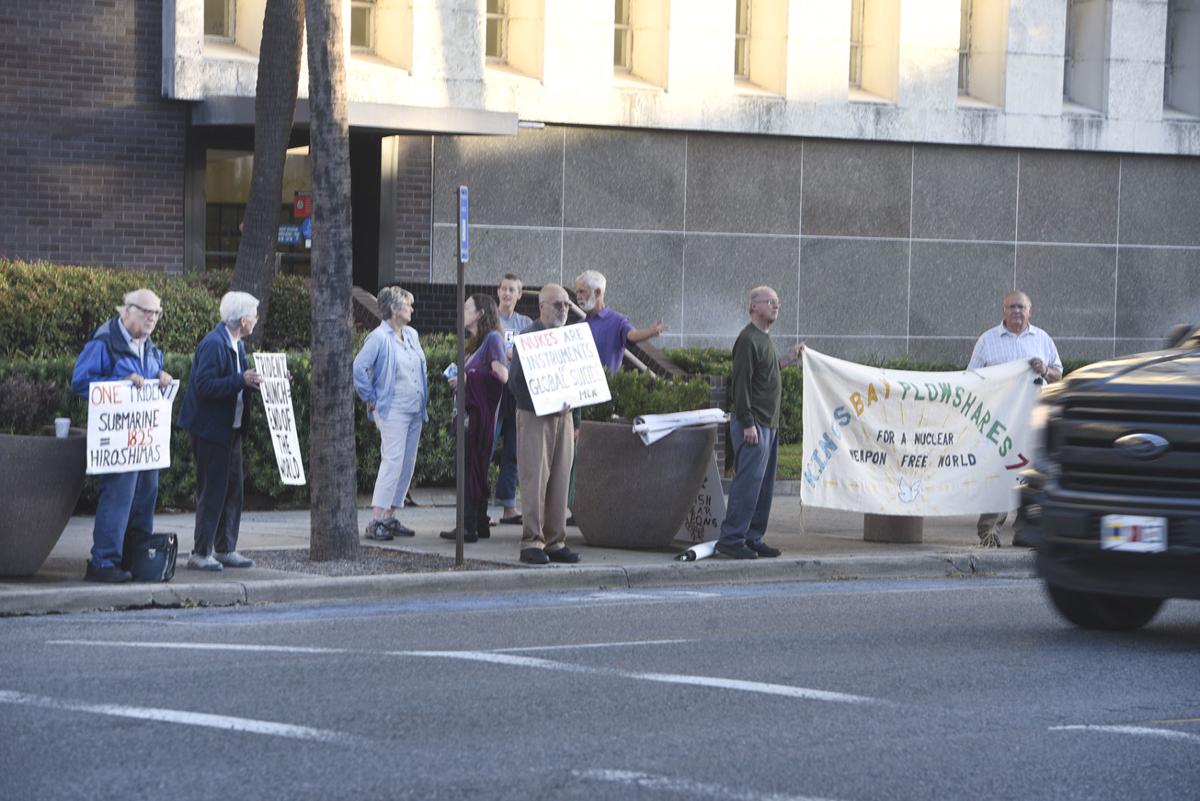 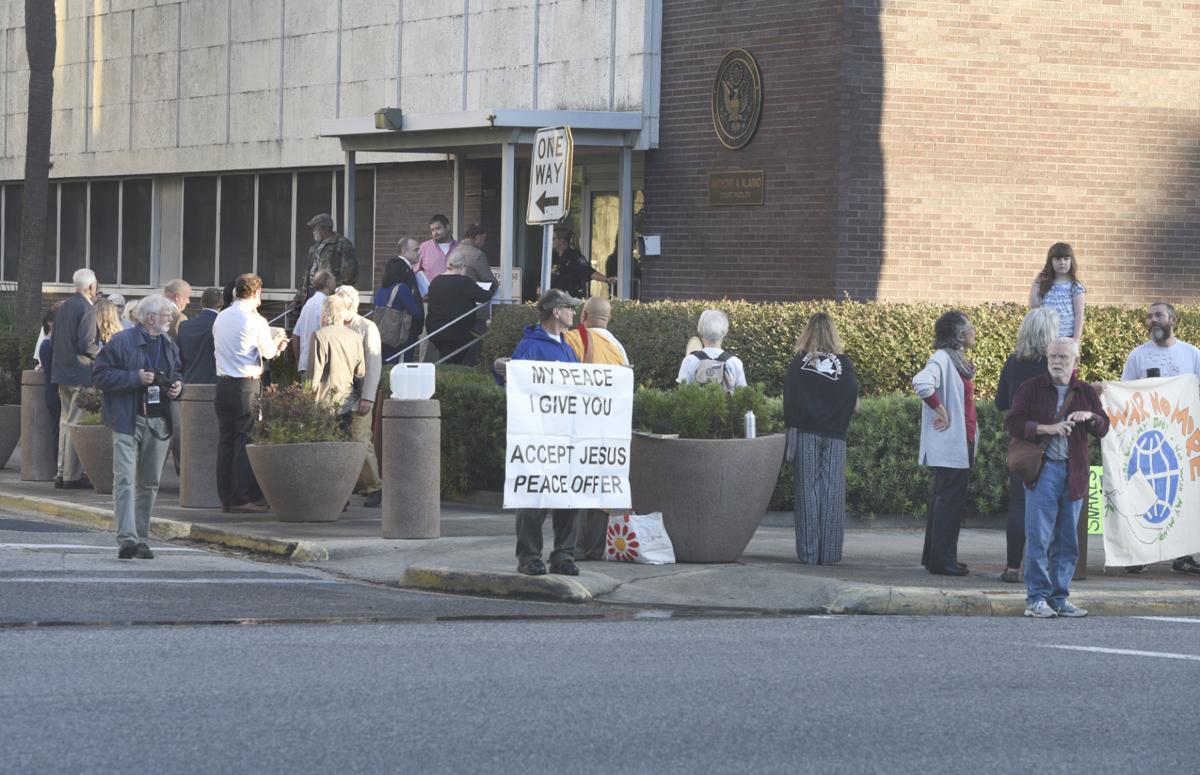 At the controls of a B-52 Stratofortress in the film “Dr. Strangelove,” Slim Pickens as Maj. Kong opens up the internal communications and says to his crew, “Now look, boys, I ain’t much of a hand at makin’ speeches, but I got a pretty fair idea that something doggone important is goin’ on back there. And I got a fair idea the kinda personal emotions that some of you fellas may be thinkin’. Heck, I reckon you wouldn’t even be human beings if you didn’t have some pretty strong personal feelings about nuclear combat.”

Monday, a group of around 75 people called for federal jury duty got to ask themselves if they had strong personal feelings about nuclear weapons, and whether those feelings would impact their ability to judge the seven anti-nuclear activists who broke into Naval Submarine Base Kings Bay in April 2018.

For reasons not immediately disclosed publicly, the court excused four people immediately. Two more received quick excuses because of medical necessity. Another nine prospective jurors raised their hands when asked if they presently felt the seven defendants were guilty. Many prospective jurors had connections to Kings Bay, and at least 24 people admitted to coming to court with prior knowledge of the case.

Because of the logistics involved with seven defendants represented in different manners, the court held individual voir dire of the prospective jurors in a room outside the courtroom, a process that took nearly two hours. From there, the pool shrunk further with a brief peremptory challenge period that gave the court its jury — seven white women, four white men and three black women. The court did not make clear which two are the alternates.

In his opening statement, Assistant U.S. Attorney Karl Knoche laid out the basics of what prosecutors would show the jury — through a process of calling witnesses involved in base security, law enforcement and examining video the defendants themselves shot — the matter before the jury is a relatively simple one. That being, the defendants broke the law, they went out of their way to prove they broke the law, and as a result they have to bear the consequences of their actions.

The defense goes into the trial hamstrung by a lack of ability to use as defenses arguments made frequently and at length in pretrial hearings. The defendants’ stance is they admit they did what they did, but they deny their actions are illegal. That’s a harder point to make since the court ruled they can’t use the Religious Freedom Restoration Act, the necessity defense, or argue that possession of nuclear arms is illegal under U.S. law.

In fact, U.S. District Judge Lisa Godbey Wood warned the defense at the end of court Monday, stating that she allowed defense attorney Bill Quigley and defendant Clare Therese Grady significant leeway as they ventured into those banned defenses during their openings. Wood said the court would move to action if the defense continued to push the issue in such a manner.

The trial resumes today at 9 a.m., and is estimated to last through the end of the week.

College of Coastal Georgia will host this weekend a traditional fall commencement, but safety will be a top priority during the event, the college announced Monday.

The Glynn Haven Park Committee has announced plans to build the first public park in the middle of St. Simons Island.

Anthony Kontaxis arrived with only an extra coat.