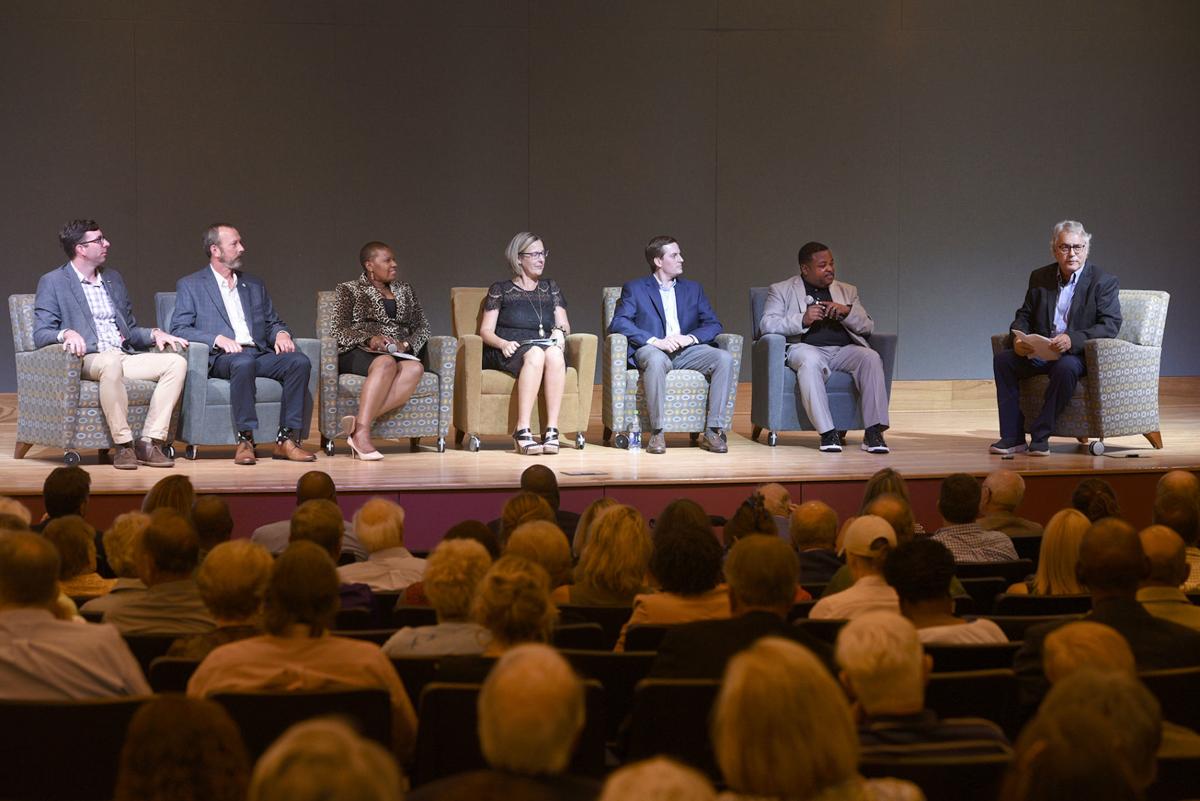 Moderator Bert Roughton, right, is joined on stage by a panel of local stakeholders and an expert on reviving downtown districts during the final installment of College of Coastal Georgia Foundation 2019 Distinguished Speaker Series on Wednesday. The panel discussed ways to revitalize downtown Brunswick. 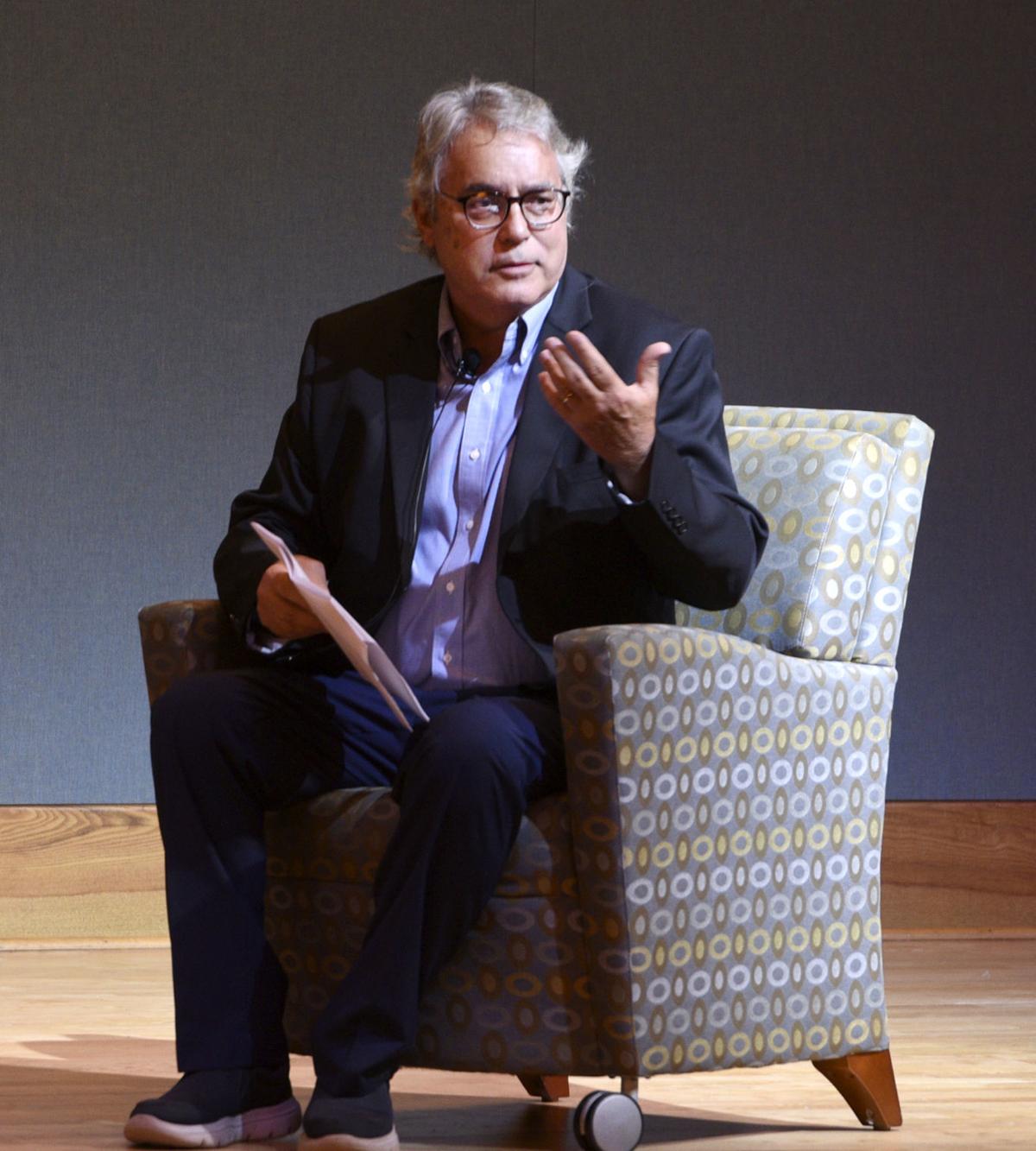 Moderator Bert Roughton, right, is joined on stage by a panel of local stakeholders and an expert on reviving downtown districts during the final installment of College of Coastal Georgia Foundation 2019 Distinguished Speaker Series on Wednesday. The panel discussed ways to revitalize downtown Brunswick.

The growing optimism for the future of downtown Brunswick was the subject for discussion Wednesday at College of Coastal Georgia’s Southeast Georgia Conference Center.

College president Michelle Johnston started the meeting by explaining the purpose of the panel discussion “Bringing it Home: A Panel Discussion on the Revitalization of Brunswick” was to encourage thought and conversation about the city’s future.

“I believe the college will play an important role,” she said.

Josh Rogers, president and CEO of NewTown Macon, was among the six panel members speaking to the audience of about 250 people. He explained how the city of Macon spent more than $1 million in an attempt to lure merchants to occupy the many empty storefronts downtown, with no success.

Seven years ago, the effort shifted to encouraging the creation of loft space and apartments in downtown Macon. There are now 648 units downtown and that number will grow to more than 1,000 units by the end of 2020, he said.

“You’ve got to have a base of residential housing,” he said. “Our challenges never go away, they just change. Now, there’s not enough supply to meet demand.”

“We need a few more things to do,” she said. “First Friday is great, but we need more to fill in. I want people to be excited every night.”

Jeff Clark, outreach director for Safe Harbor’s Street Beat, said a mixed market is needed downtown that will not force longtime residents away. The downtown waterfront needs to be developed in a family friendly way to create more activities there.

“We’re looking to bring in an influx of new residents,” she said. “I don’t want prices so high it creates a divide with people who have lived here for generations.”

Michael Kaufman, managing member of the Kaufman Development Group, said community buy-in is essential for the revitalization of downtown Brunswick to succeed.

“The issue is getting bodies down there,” he said. “You need an involved community.”

One challenge is creating a stronger connection with the city’s waterfront, in part because of the challenges crossing Bay Street to get to Mary Ross Park.

“It’s difficult to use. There’s no connection there,” he said.

Mathew Hill, Brunswick’s downtown development authority director and the only public official on the panel, said he gets lots of positive feedback from visitors about the friendliness and willingness of local residents to talk to visitors.

Hill said community support could help motivate the Department of Transportation to address the challenges for pedestrians to cross Bay Street.

Panel members agreed the city has an unfair perception of being unsafe after dark. Wilkes, whose business is downtown, said she is often in her restaurant at 5 a.m. and has never had a problem.

“I never feel unsafe,” she said. “As for crime, it’s really nonexistent.”

Rogers said he heard the same criticisms in Macon and told the audience to focus on adding more residential units downtown and “stop worrying about the criticism about crime.”

The issue of parking was also discussed. Panel members agreed there are challenges with parking that will have to be addressed. Rogers said parking garages work because employees working downtown using the garages in the daytime and residents use them at night.

“You’re always going to have a parking problem,” he said.

Another challenge will be to find ways to encourage residents on the islands to drive across the causeway to come downtown.