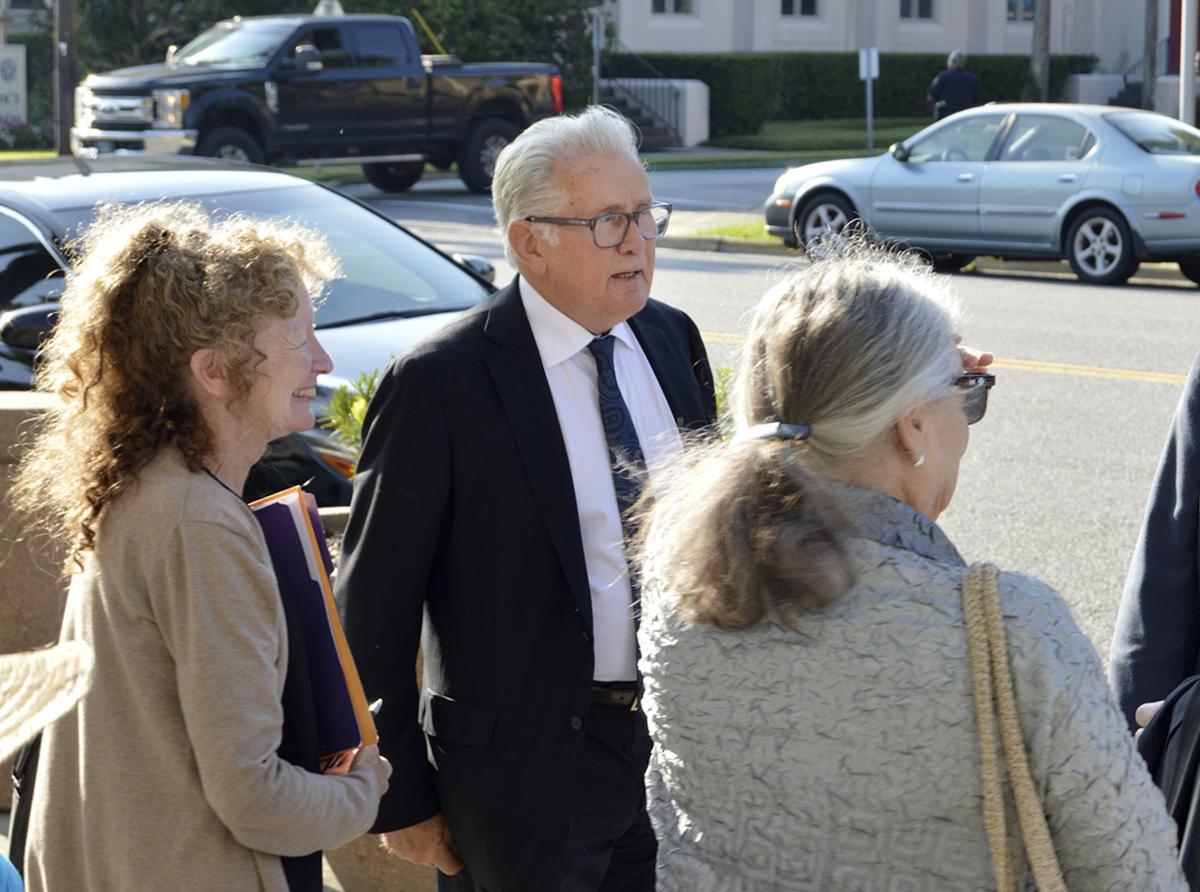 Emmy-award winning actor Martin Sheen was among the people who came to the Frank M. Scarlett Federal Building on Wednesday to support the Kings Bay Plowshares defendants. 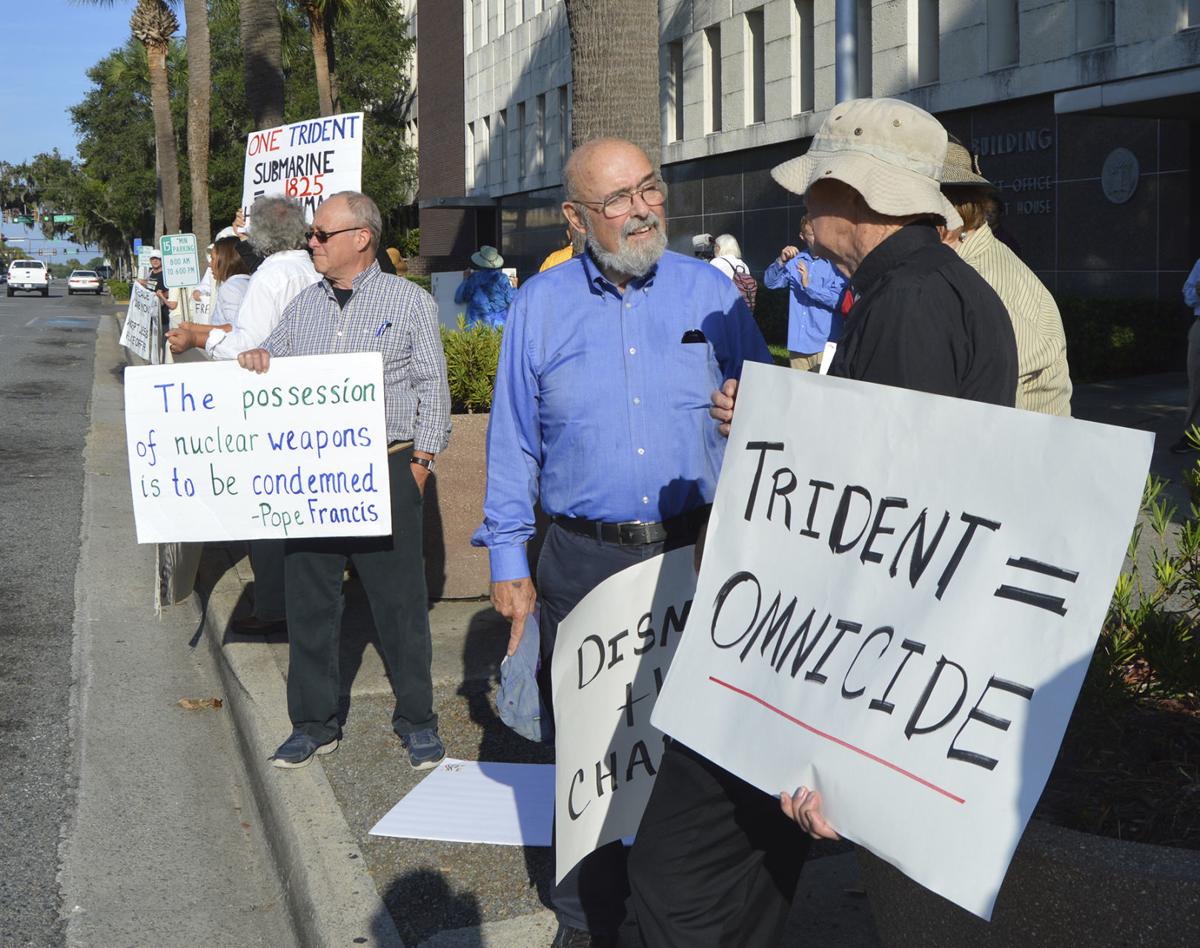 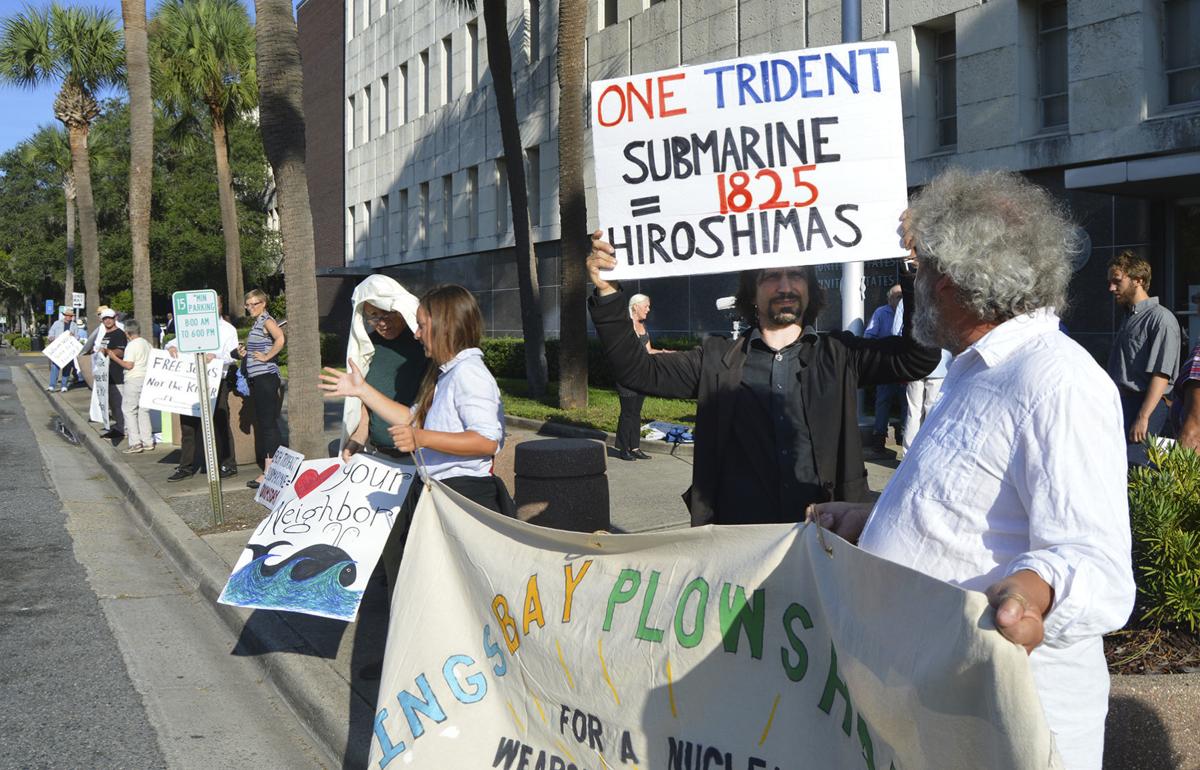 People hold up signs in support of the Kings Bay Plowshares outside the Frank M. Scarlett Federal Building on Wednesday. 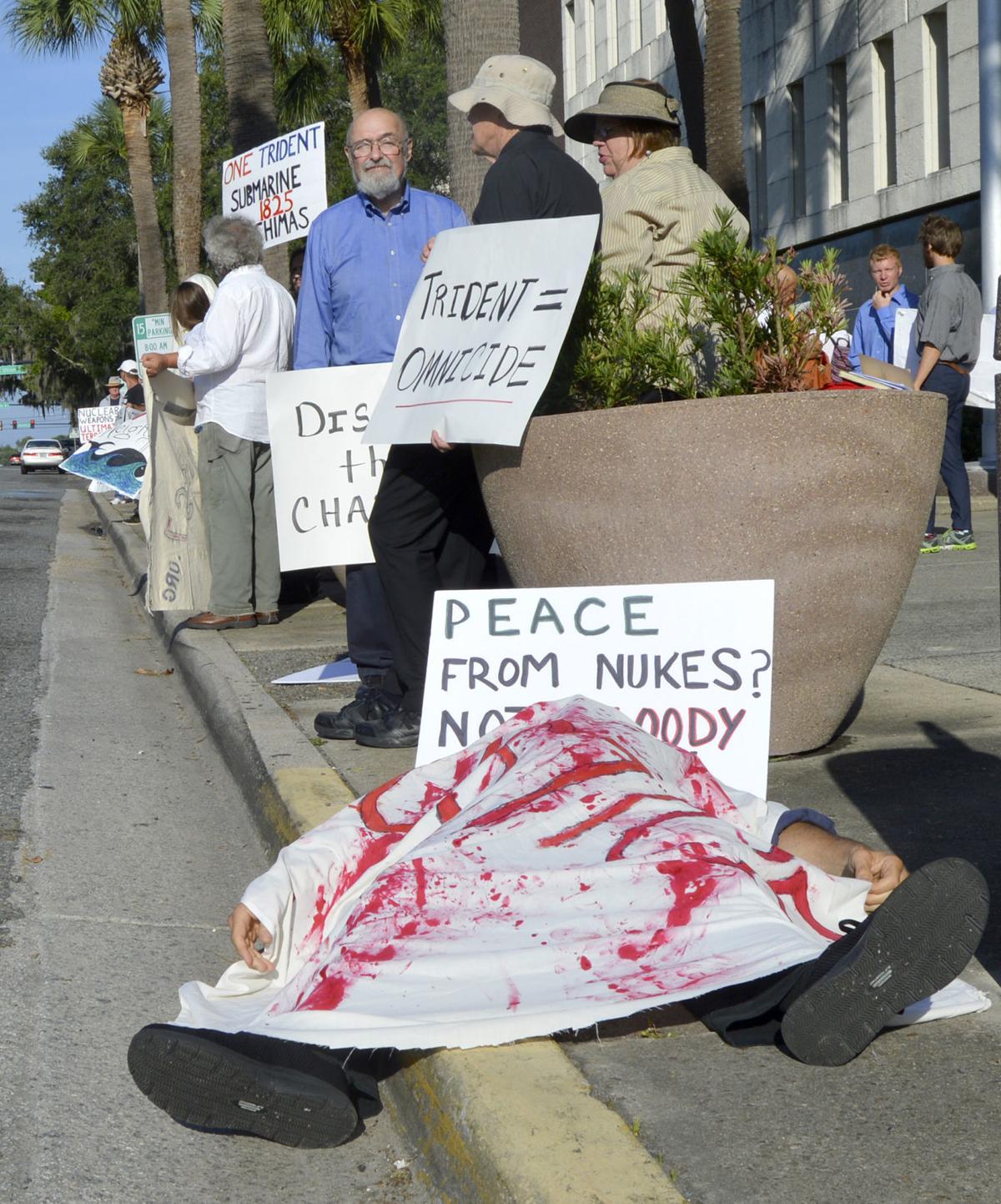 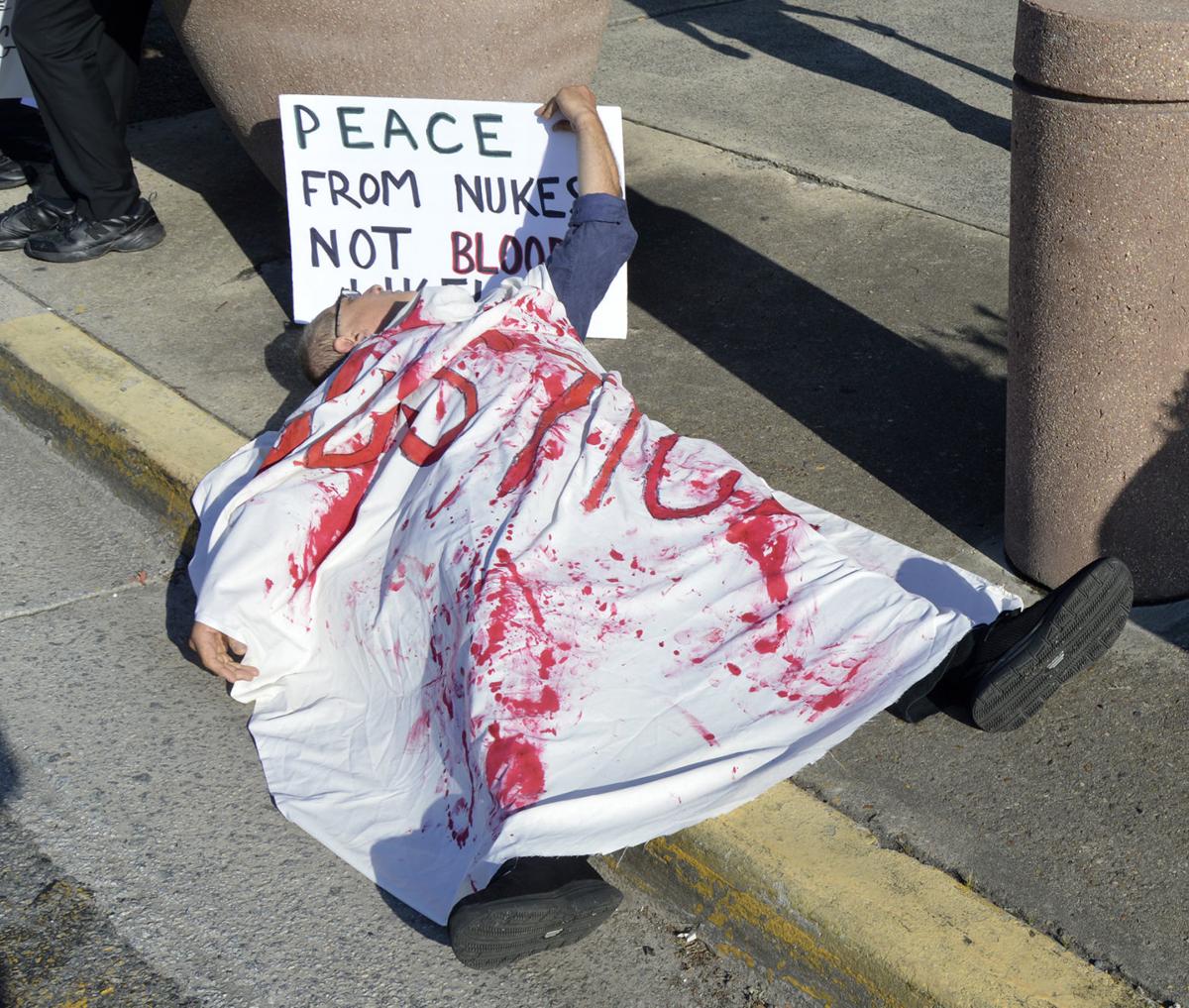 Emmy-award winning actor Martin Sheen was among the people who came to the Frank M. Scarlett Federal Building on Wednesday to support the Kings Bay Plowshares defendants.

People hold up signs in support of the Kings Bay Plowshares outside the Frank M. Scarlett Federal Building on Wednesday.

The line was out the door an hour before the hearing was scheduled. Not long after, word came that fewer than 10 spaces were left in the courtroom. Inside were around 50 people in the gallery — including Emmy award-winning actor Martin Sheen — another 30 or so waiting outside, an enhanced law enforcement presence and a backup chiller for courthouse air conditioning.

It was one of the more unusual mornings for the Frank M. Scarlett Federal Building.

Provided with around 90 minutes of time, the Kings Bay Plowshares defendants and their attorneys had the opportunity to counter U.S. Magistrate Judge Benjamin Cheesbro’s report and recommendations that their request to throw out the charges against them and dismiss the case be denied.

Before entering the courthouse, Sheen expressed a belief held by many there. As a young man in New York City, he met Dorothy Day — grandmother of defendant Martha Hennessy — and became involved with the Catholic Worker movement, of which the defendants are also a part.

“I’ve been inspired most of my life by people who take the gospel seriously and live the gospel as a basic truth,” Sheen said. “If what you believe doesn’t cost you anything, then what is it good for? I think that’s the fundamental value of the Plowshares’ action.”

The alleged vandalism is a matter of law rather than action — what the federal government perceives as property destruction is considered by the defense as symbolic nuclear disarmament, a necessary exercise of their Catholic faith, protected under the federal Religious Freedom Restoration Act.

Defense attorney Stephanie McDonald argued the government, following the defendants’ arrest, had a legal obligation under RFRA to react in the least-restrictive manner possible, and a prosecution on three felonies and a misdemeanor was not close to that standard.

O’Neill and Colville, given their chances to speak before the court, openly speculated as to what could have been a more-restrictive action, like possibly a firing squad or public flogging.

McDonald said it was key to the exercise of their religious beliefs that the defendants conduct their symbolic nuclear disarmament at the site, inside the base’s perimeter fencing, and that this couldn’t be accomplished the same outside the fence line.

As discussed at length in a two-day hearing in November, the defendants hold a belief in the primacy of conscience, that inaction is the same as complicity, and that according to their faith they were compelled to act because nuclear weapons are blasphemous.

McDonald also mentioned that per earlier court rulings, the government needed to develop well-defined and particular compelling interests in halting or otherwise hindering the defendants’ religious exercise, whereas in this case there are only general ones expressed regarding security and property protection.

And in regard to a less-restrictive action, she referred to the base commander’s own testimony that previous ban-and-bar letters worked well in keeping people from coming back on base property.

The prosecution argued that such particulars aren’t necessary, that enforcing policies protecting property and access to the base does not amount to a substantial burden on the defendants, who could have done their symbolic nuclear disarmament without violating the law.

The fact that both could be accomplished, the argument went, is made clear by the defendants saying that ban-and-bar letters would be fine. If those letters would keep them off the property, and the defendants are OK with that, then they didn’t need to be on the base to conduct their protest.

What it came down to, and what the prosecution touched on, was these defendants weren’t likely to commit the same acts at Kings Bay, but may well do so elsewhere. The defendants have lengthy histories of involvement in this movement which included what courts and juries over the decades decided were criminal violations of the law, regardless of the intentions behind the actions.

So, the only punishment that could lead to a certainty on the part of the government that the defendants wouldn’t engage in similar behavior elsewhere in the next few years, given the chance, is a conviction on the charged counts and a sentence involving prison time.

U.S. District Judge Lisa Godbey Wood, in her questioning, spent notable time going over whether the surreptitiously breaking in to the nuclear submarine base was a part of the defendants’ religious exercise as well, which was confirmed by the defense. She also pushed on where the defense drew the line regarding the base protest — if they had to be within the perimeter, how close to the nuclear weapons did they need to be, and what would RFRA say about that?

Although anything is possible, the direction of the questions indicate that like Cheesbro, Wood takes the defendants’ beliefs and arguments quite seriously, but also takes quite seriously the government’s interest in national security and protection of property. If the case is allowed to continue, the court would follow with a scheduling order so both sides can prepare for a trial.