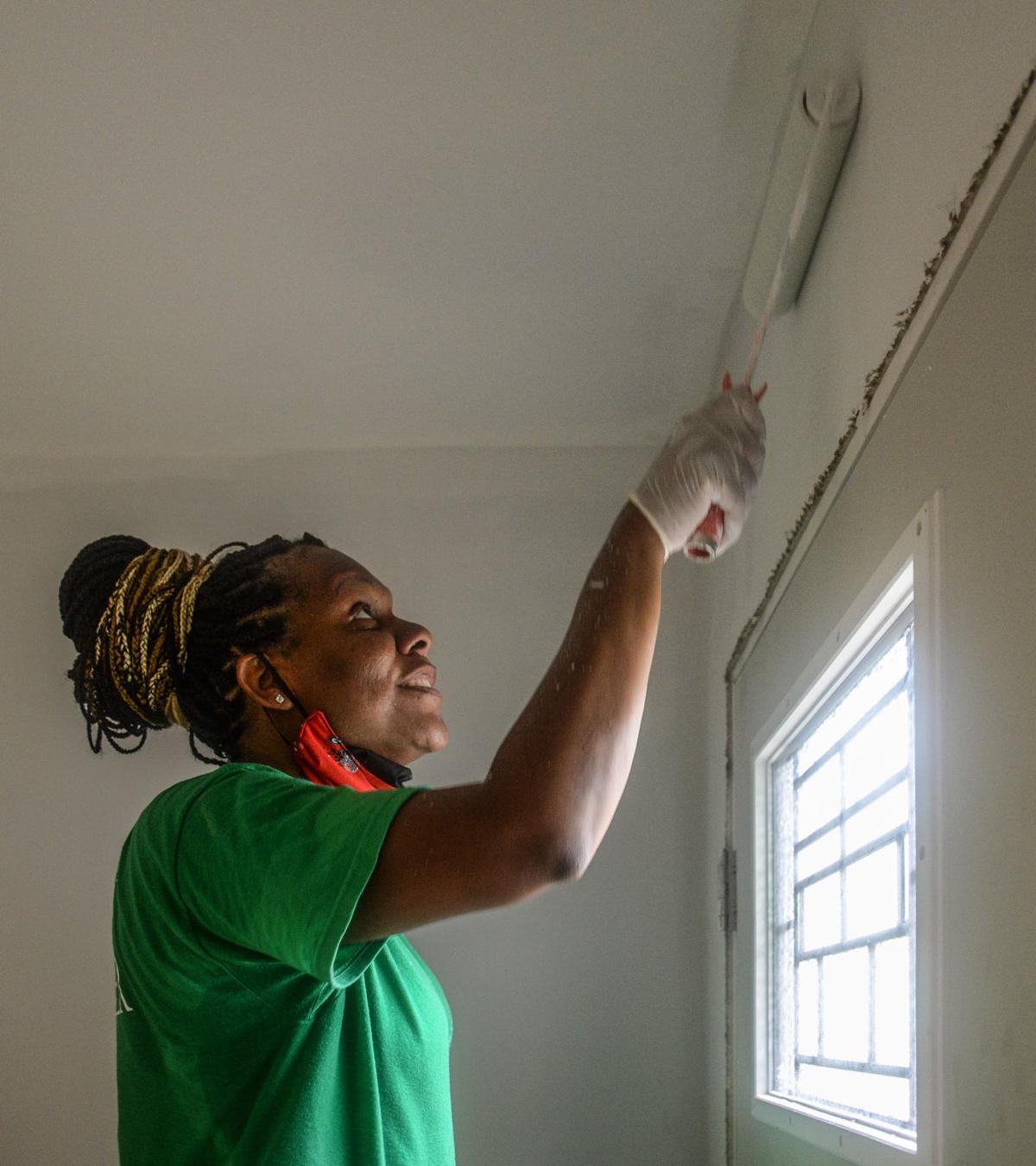 Charlatte Smith, community services chair for the Juvenile Court Association of Georgia, paints above a window in a Habitat for Humanity of Glynn County house on Reynolds Street. 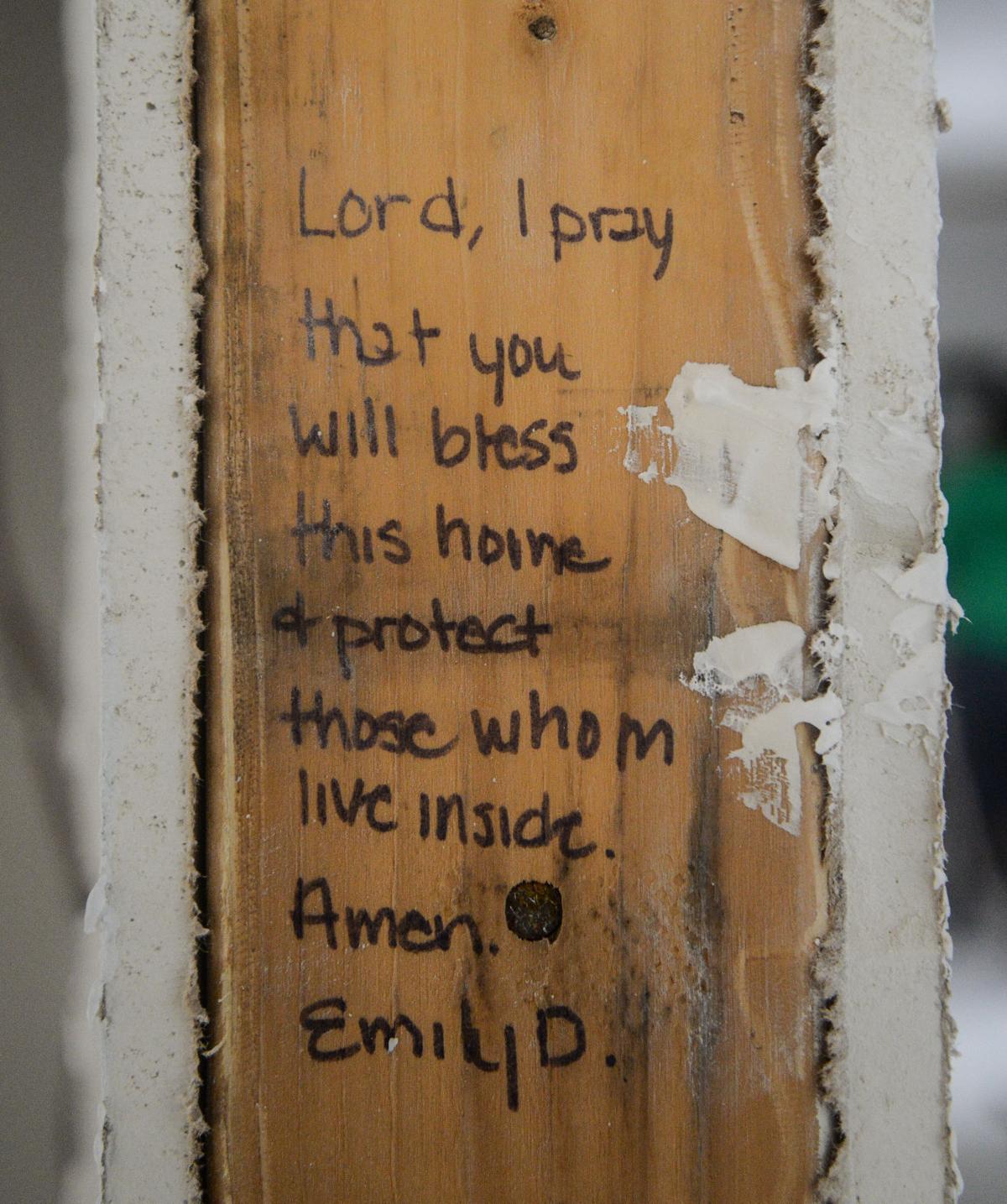 Above, a volunteer’s blessing, punctuated with a nail head, is seen inside a door frame at the Habitat house. Top, Gwinnett County Juvenile Court probation officer DeAndre Fields and drug court coordinator Traci Moultrie sit on a wall having lunch in front of the Habitat house. 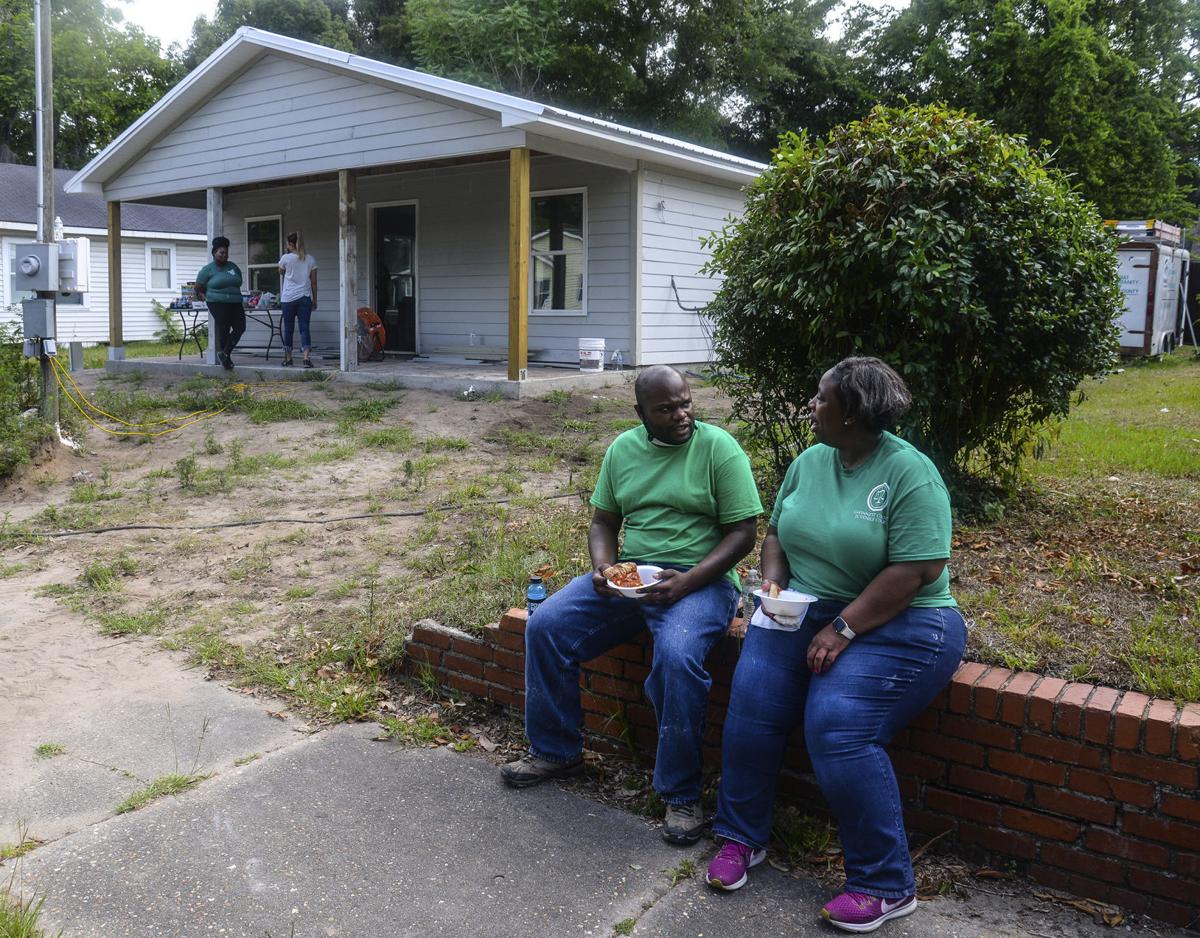 Charlatte Smith, community services chair for the Juvenile Court Association of Georgia, paints above a window in a Habitat for Humanity of Glynn County house on Reynolds Street.

Above, a volunteer’s blessing, punctuated with a nail head, is seen inside a door frame at the Habitat house. Top, Gwinnett County Juvenile Court probation officer DeAndre Fields and drug court coordinator Traci Moultrie sit on a wall having lunch in front of the Habitat house.

Some juvenile court officials who deal with troubled youth in the Atlanta area arrived in Brunswick early Tuesday morning to help provide a safe home for a local mother and her children.

About a dozen Juvenile Court officials from Henry, Clayton and Gwinnett counties painted floors and ceilings of Habitat for Humanity of Glynn County’s first house built since the pandemic shut down construction.

It’s not as if they happened to be in town. All are members of the Juvenile Court Association of Georgia which is holding its annual convention of 21 independent courts about 70 miles away in Savannah.

The organization always tries to find a place close to its convention site to volunteer, and this year the house on Reynolds Street near Orange Square was a good fit.

“I got up about 4:30 today to get here at 8:30,’’ said Charlatte Smith, chair of community services for the organization.

She came from Henry County while Stanford Cox, president of the association, works as a probation officer in Clayton County. Cox said it is always rewarding work as it was in Brunswick, “especially after seeing all the people who have been involved and seeing the scriptures written in the walls.”

Becca Randall, interim director of the Habitat affiliate, said workers used markers to write Bible verses and prayers on the framing as the house was built.

“Prayers and blessings are written into the walls,’’ Randall said.

They will all be covered as doors and cabinets are hung and the drywall is completed, but Smith said that doesn’t matter.

“Even though that’s covered up, that’s there forever,’’ she said.

Randall said the affiliate is honored to have the Juvenile Court officers working unselfishly considering they see so many traumatic incidents every day.

Cox said when juvenile probation officers provide their services they get into homes and work with whole families to strike at the root of the problems. Too often, he said, children re-offend as soon as they’re sent home.

By providing a safe home and the financial education to equip owners to keep it, Habitat provides a more stable home environment for children who move often from one substandard house to another.

DeAndre Fields, a juvenile probation officer in Gwinnett County, said sometimes the house doesn’t matter. He spoke of being called to the home of a 17-year-old probationer who was “acting like a knucklehead.”

“His mom brought him to my office. We got on his case. Two hours later, his mom calls and says he doesn’t want to go to school,’’ Fields said.

He and another probation officer went to the home, which Fields said he had never visited having just taken the job.

On the other hand, there are families living in rundown mobile homes with parents making a living cleaning houses and hotels, working in lawn services or roofing houses.

“Those are the nicest families,’’ he said.

“Until they get Americanized,’’ said Traci Moultrie, who coordinates a drug court.

The volunteers’ work Tuesday will help keep the house on schedule as the project continues to approach move-in day for the homeowner who has six children, four of them still at home.

The project was delayed 18 months by the pandemic, but the homeowner, who works with the Glynn County school system, “has been very patient. She’s been so graceful,’’ Randall said.

“She’s so grateful for this house. She’s here every Saturday working. I’m so excited to get this project completed and let her get started on a new foundation,’’ Randall said.