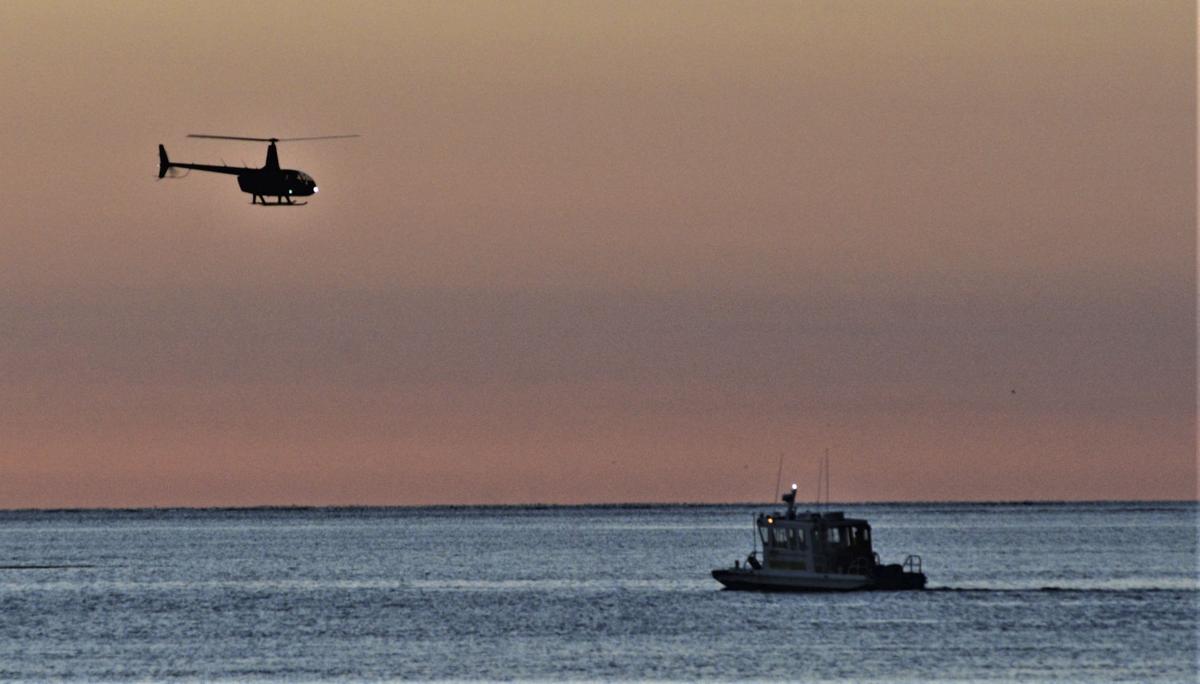 A helicopter flies over the VB 10000 and over a boat as the stern of the Golden Ray is moved. 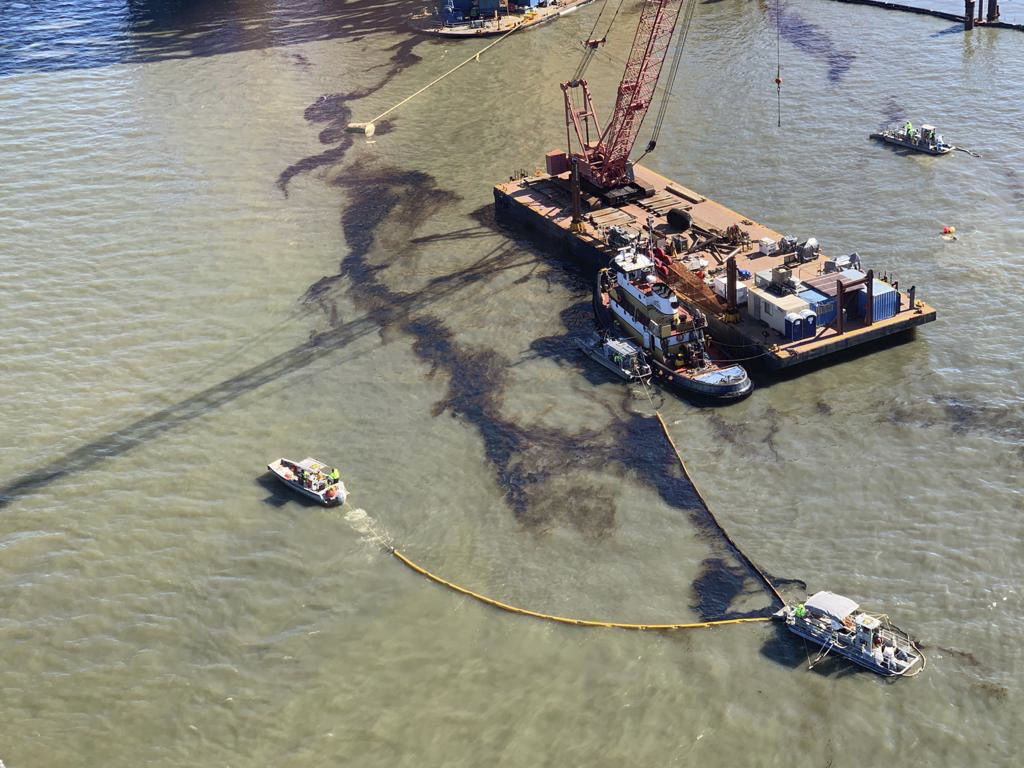 A formation of recovery vessels use boom and an oil skimmer to recover an oil discharge in the vicinity of the Golden Ray wreck earlier this week.

A helicopter flies over the VB 10000 and over a boat as the stern of the Golden Ray is moved.

A formation of recovery vessels use boom and an oil skimmer to recover an oil discharge in the vicinity of the Golden Ray wreck earlier this week.

When the spotter in the overhead helicopter saw the thick black formation stretching large across the surface of the St. Simons Sound, an alert immediately went out to crews on the water below.

The spotter reported the location of a cloud of heavy oil drifting swiftly from the shipwrecked Golden Ray as salvors lifted the vessel’s severed stern section from the water Monday morning.

That alert mobilized an immediate response from the flotilla of vessels armed for just such an emergency. Two boats spirited into place ahead of the outgoing oil blob, towing either end of an inflatable current buster.

The boats latched on to either end of the V-shaped craft and moved into position to catch the oily discharge as it flowed in the swift outgoing tide. With the two boats keeping the current buster spread, the oil slick flowed to the apex in back and was collected for removal.

Aligned in strategic formation upon the prevailing tides, numerous other boats stood ready nearby to catch leaking oil with absorbent booms, containment booms and oil-skimming devices.

This and similar scenarios involving heavy oil discharges were repeated many times throughout the day Monday. The operation has more than 30 vessels outfitted for addressing oil pollution, all crewed with folks trained for the task.

An added precaution, the shipwreck is surrounded by a 1-mile perimeter environmental protection barrier. The barrier has mesh netting below to catch loose vehicles and other large debris and oil containment boom lining its surface.

“We saw light sheen in the early morning (Monday),” said U.S. Coast Guardsman Michael Himes, spokesman for Unified Command. “Then we started to see discharges. And when these discharges happen, they’re intense and fast-moving. That’s why we have our people out there with the right equipment and the right scale of response.”

“That’s how fast it can happen in the sound,” Himes added. “By the end of the day, our overflights did not show any discharges. What we’ve been planning for is what we saw on Monday.”

Susan Inman of the Altamaha Riverkeeper expressed concern that the tactics might not be sufficient to combat a larger oil discharge in the sound.

“The efficacy of floating boom strategy has been and continues to be less than ideal in the St. Simons Sound,” she said.

The Golden Ray had a cargo of 4,200 vehicles onboard when it capsized in the St Simons Sound while heading out to sea on Sept. 8, 2019. The shipwreck, now missing its bow and stern, will undergo five more cuts before the monstrosity is removed from the sound.

The twin-hulled VB,1000 crane vessel completed the weeklong effort to sever the stern section from the half-submerged shipwreck Saturday. The VB 10,000 straddled the shipwreck and applied its system of winches, lifting blocks and pulleys to an anchor chain that tore through the shipwreck’s exterior and 13 interior decks by sheer force of tension.

Unified Command noted in June the salvage process would produce oil leaks. Unified Command consists of the Coast Guard, the Georgia Department of Natural Resources and Gallagher Marine Systems. It is responsible for ensuring that the salvage operation adheres to environmental protection rules established by the federal Oil Pollution Act of 1990.

Coast Guard officials initially estimated the Golden Ray’s fuel tanks held some 380,000 gallons of oil. There was a significant discharge of oil from the ship’s hull vents shortly after the wreck. Some 25 miles of marsh grasses and shoreline were oiled in late September and early October of 2019 as a result, according to DNR. Salvors then pumped some 320,000 gallons of oil from the shipwreck’s tanks over the next several months.

However, salvors found it impossible to reach thousands and thousands of gallons of oil inside the pipelines that connect the tanks to the engines, Himes said.

The ship’s engine and engine room are located in what is now the rearmost section of the shipwreck, Himes said. Because the stern section is so close to the engine room and engines, salvors and cleanup crews anticipated oil discharges.

“Due to this cut’s proximity to the engine room, we expected to encounter residual oil and petroleum products inside tanks, piping and machinery which could not be accessed in the fuel removal phase of the response,” said Gallagher Marine Systems’ Chris Graff, an incident commander with Unified Command. “The response team was fully prepared and in position to respond throughout the entire cut and lift.”

At least half a dozen vehicles tumbled into the water from the exposed decks of the stern section during Monday’s lifting phase. A piece of loading ramp also fell off.

The loose vehicles and other large debris remain within the environmental protection barrier, Himes said. All will eventually be plucked from the water by cranes, he said.

To make room for the 455-8 barge so that it will fit beneath it Monday, the VB 10,000 had to venture halfway out of the open gate on the west side of environmental protection barrier.

“The distance needed from the wreck meant that the VB 10,000 had to be positioned halfway out of the EPB so the stern section could be received in the center of the barge,” Himes said. “So far, our surveys have not found any large debris outside the EPB. The discharges are the main concern for us right now.”

Originally, salvors had planned to move the VB 10,000 forward on the shipwreck to cut off the foremost section. Now, Himes said they are weighing the option of cutting the rearmost section next. This is the section that contains the ship’s engines and the oil pipes that feed it.

The beginning of the next cut will be preceded by a time of preparation, maintenance and inspections on the VB 10,000, Himes said.

Inman said she hopes the time of preparation will also be spent improving its response to oil pollution. The environmental advocacy group estimates between 44,000 and 60,000 gallon of heavy oil may still remain inside the shipwreck.