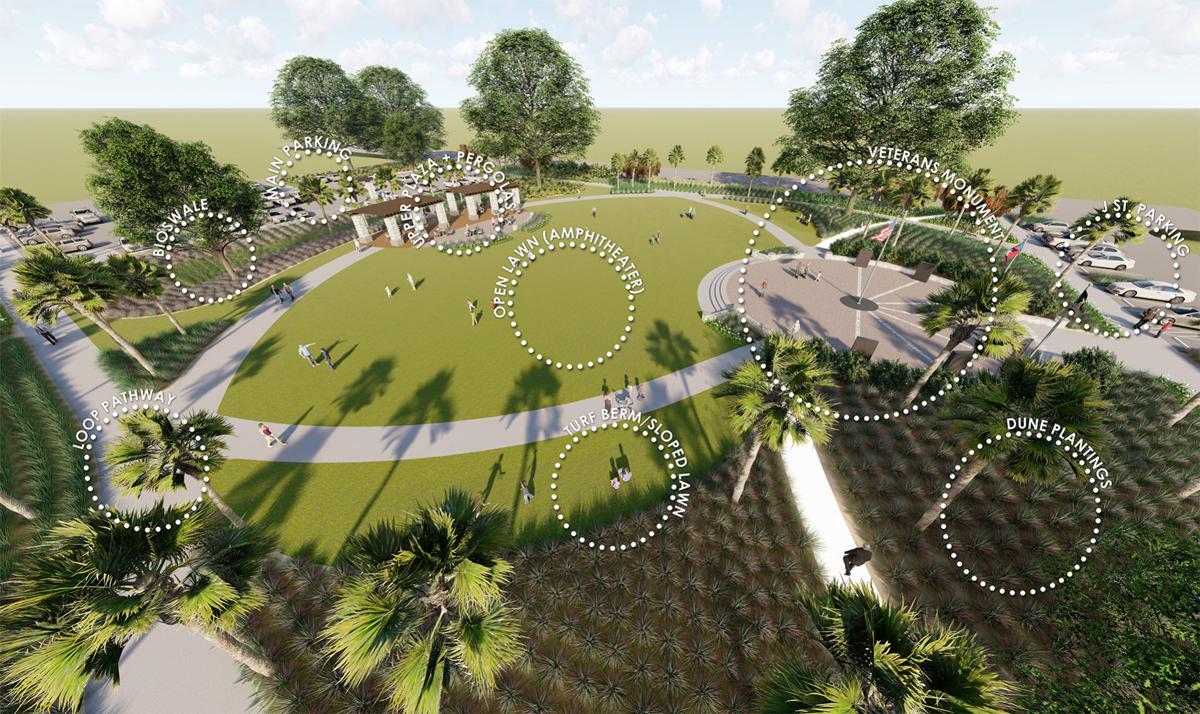 This aerial rendering of the proposed Veterans Memorial Park in Brunswick by TSW Architects shows the different aspects the park may feature. 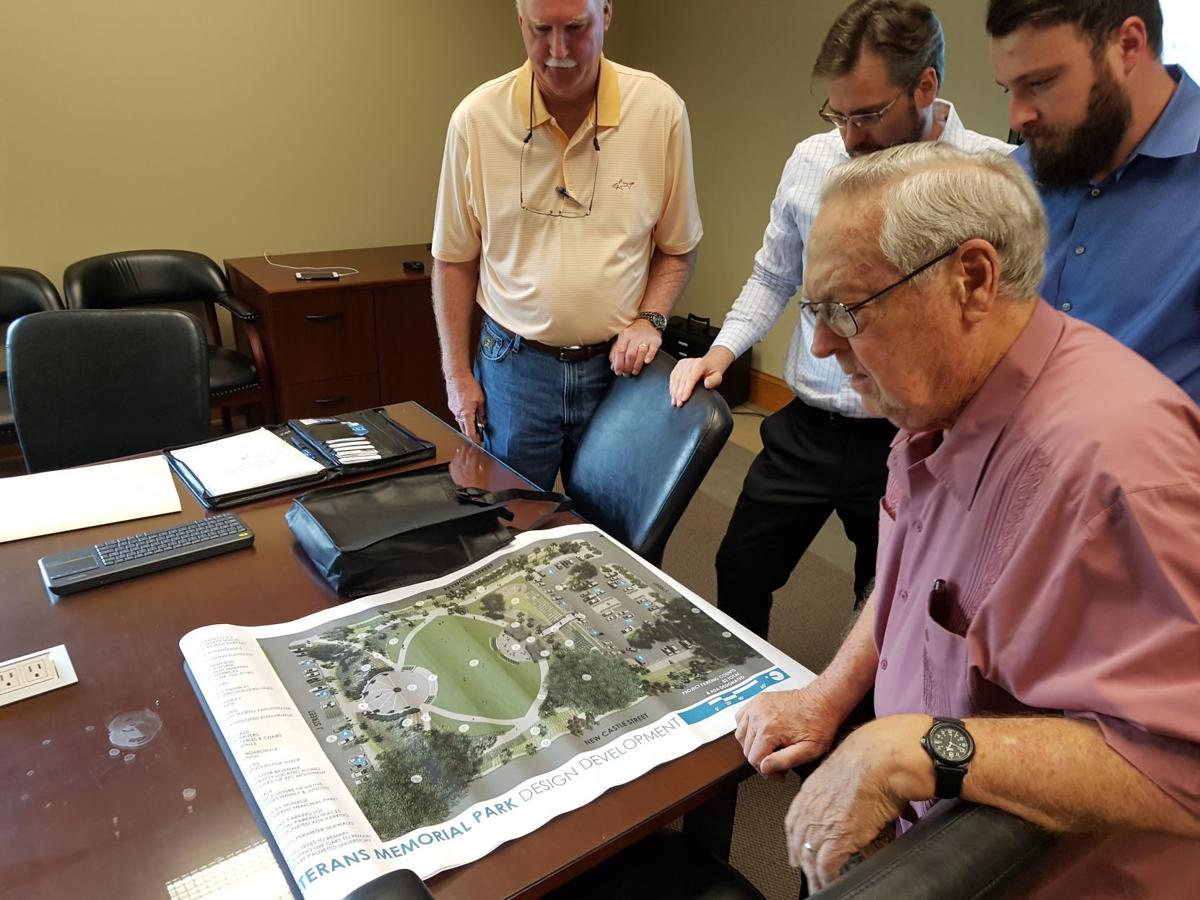 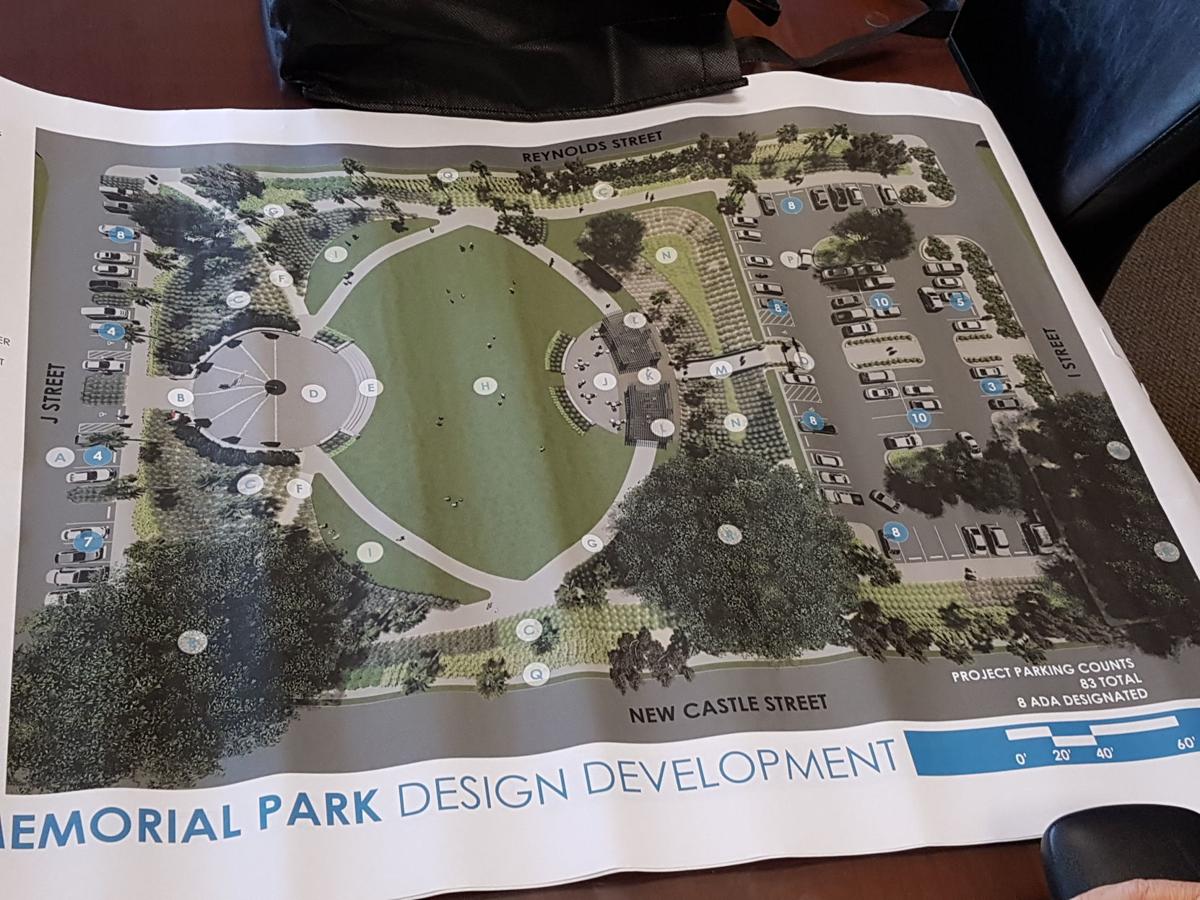 This Wednesday photo shows the concept design of a planned veterans memorial park off Newcastle Street in Brunswick.

This aerial rendering of the proposed Veterans Memorial Park in Brunswick by TSW Architects shows the different aspects the park may feature.

This Wednesday photo shows the concept design of a planned veterans memorial park off Newcastle Street in Brunswick.

TSW architects Adam Williamson and Peyton Peterson presented the concept, which showed parking along the road on the J Street side, and some off-street parking on the I Street side. A landscaped entryway on the I Street side would lead through an archway and over a bridge crossing a bioswale.

Across the bridge, visitors would find an open grass area sloping down to a circular memorial. Another entrance would be located behind the memorial, on J Street.

The concept also showed landscaped hills around the outer edge of the park, which Williamson said would make it feel more enclosed from inside.

The memorial itself would be on a circular brick platform raised 18 inches off the ground. Six monuments, one for each branch of the military, would be arranged in a semicircle facing the grass opening. Differently colored bricks would create a circle with a radial pattern connecting a military seal in the middle of the memorial with the six monuments. Each of the monuments would be six feet tall and three or four feet wide.

Stormwater would drain from the I Street parking lot to the bioswale, according to the plans.

Glynn County Commissioner and U.S. Army Veteran Mike Browning, along with most of the other committee members, liked the new design, but did have some changes in mind.

Browning said the committee definitely wanted a monument to locals who gave their lives in the armed forces.

“It is a veterans memorial, so we need to make sure we recognize the local people who have sacrificed,” said Dave Olender, U.S. Army Veteran and Coastal Georgia Honor Flight president.

Members of the committee suggested breaking the J Street exit into two paths and putting a monument to local veterans between the two paths.

If someone enters the park from the I Street side, the walkway will end once they reach the grass. Phil Viviani, a U.S. Air Force veteran, saw this as a flaw, pointing out that a color guard would have to walk across grass during ceremonies, and suggested running a walkway through the middle of the grassy area.

Local Marine Corps veteran Nick Hart suggested adding the phrase “all gave some and some gave all” to the main entrance way to pay respect to veterans both alive and dead.

They also discussed the type of stone to use. The architects suggested using Elberton Grey granite, which is quarried in north Georgia and is comparatively inexpensive. Some of the members of the committee agreed, but Browning and Olender preferred black for certain parts of the monument.

“On a memorial monument for those that have fallen, I think black would much better,” Browning said.

The park concept came out over budget at around $1.8 million. About $1.5 million was set aside for it in Special Purpose Local Option Sales Tax 2016.

Chandra Kendall, a volunteer in the veteran community, suggested the county sell bricks in the raised area to cover some of the cost, as has been done in other municipalities. The architects said they were looking into it to see by how much the total cost could be offset that way.

Browning suggested the architects trim the plans down to what can be built with $1.5 million, and then fund the rest of it down the line.

“Let’s find some things to set aside for right now. I think we like everything you got here, but see what we can pull out of it than can be done later or that we need more money for. We’re fixed on the SPLOST budget of $1.5 (million). Tweak it based on the comments you’ve got here and let’s see what we’ve got next month,” Browning said.

Peterson said he would work with Glynn County Public Works Director Dave Austin to get more details so he can refine the budget and design.

The committee agreed to hold its next meeting sometime in the middle of May.