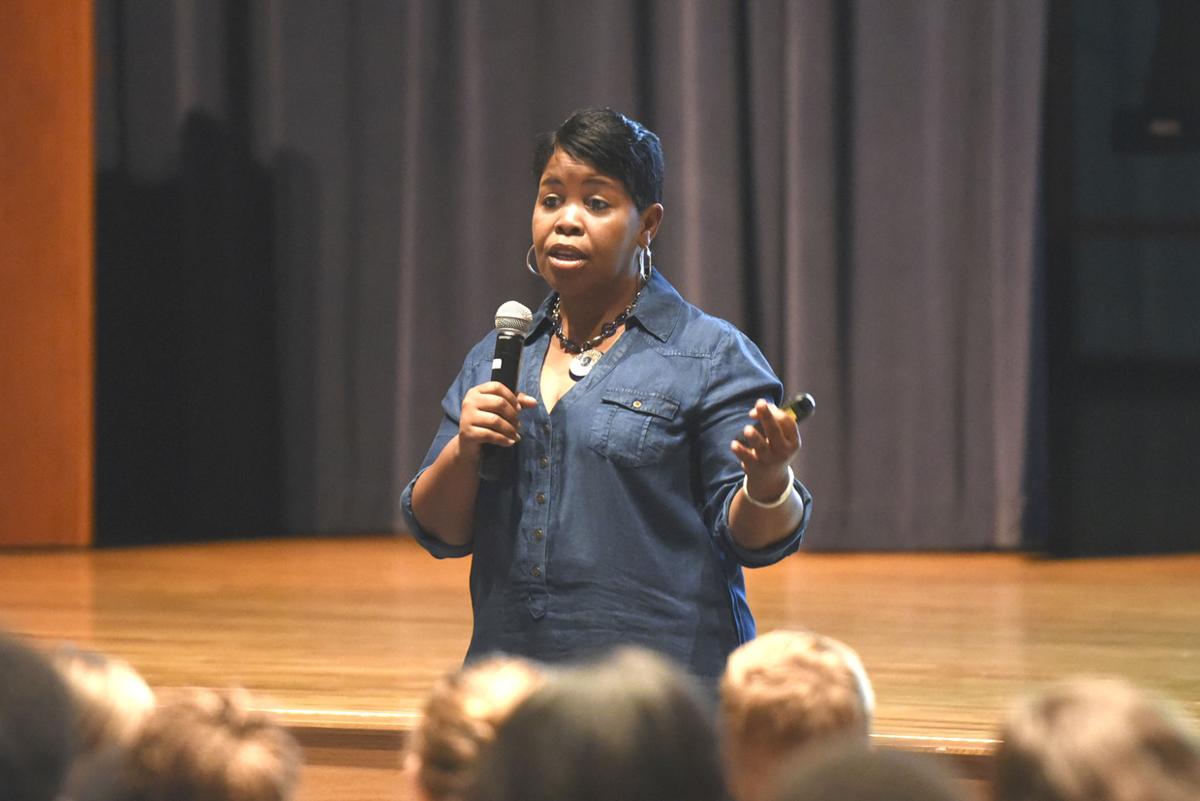 Valerie Williams speaks to a group of Brunswick High School students about the dangers of dating violence in 2016. 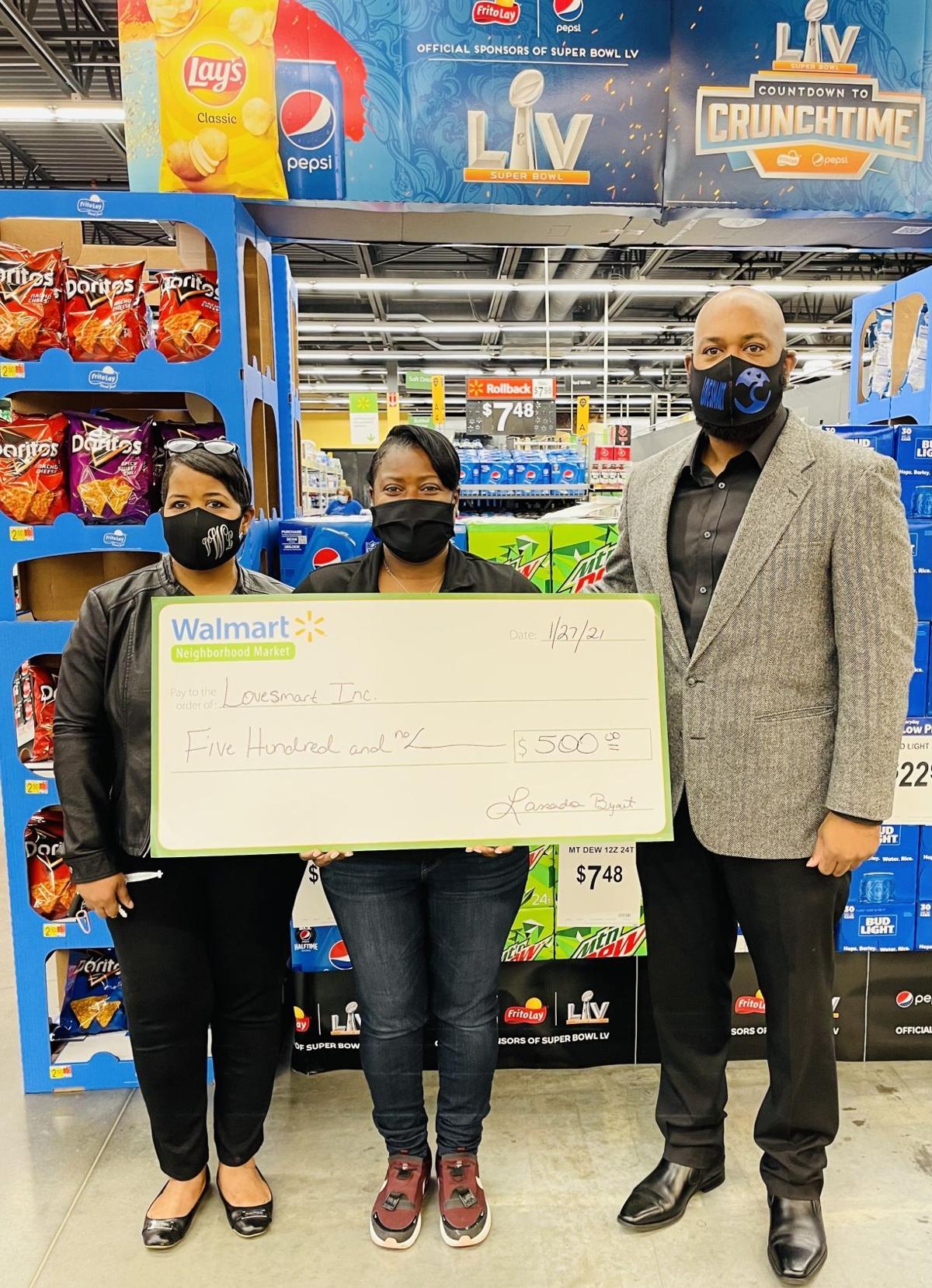 Walmart Neighborhood Market in Brunswick donated to the nonprofit Lovesmart, Inc., in January. Pictured are the nonprofit’s founder Valerie Williams and its president Brian K. Scott.

In a single month, a teenage girl received around 3,000 text messages from her boyfriend.

“Where are you? What are you doing? Why are you over there? Why are you talking to him? You see me texting you?” were among the many messages the girl received, recalled Valerie Williams, a Glynn County resident who has traveled the world raising awareness of domestic violence and educating young people on how to recognize signs of abuse and seek help.

This year, COVID-19 has limited Williams’ ability to meet students in person. But she is continuing to promote and grow her organization and hopes the community will join her in this mission.

Williams is a domestic violence survivor. In 1996, her husband of almost nine years changed the trajectory of her life in just 20 minutes when he came home and shot her three times with a .38-caliber Smith & Wesson.

“I was shot in the head, had a bullet go right above my ear, went all the way through my head and came out above my right ear,” Williams said. “And twice in my arm. One bullet came out of my spine.”

A report in The News at the time included some of these details, and in the article Williams was identified as a “domestic violence victim.” Upon reading those words, she wanted to demand a retraction. She didn’t believe herself to be a victim of abuse, as her husband had not previously caused her physical harm.

But an advocate from the Georgia Commission on Family Violence working with Williams at the time urged her to understand that what she’d experienced qualified as abuse, even if it was a singular event.

As Williams recovered from the near-fatal shooting, she began researching the signs and patterns of domestic violence. She realized she held misperceptions and recognized that many like her had not been educated about the truths of abuse.

Her healing process and newfound awareness led Williams to write her first book, “God’s Divine Intervention.” She went on to write and self-publish four more books and to found her organization Lovesmart, Inc., which focuses on preventing teen dating violence.

“As the years passed, I began to see how young teens were getting in unhealthy and toxic relationships and not even know the signs or what to look for or even think that it’s unhealthy,” she said.

Unhealthy feelings and behaviors like jealousy, control and manipulation can often be misconstrued in a young person’s mind as evidence of a romantic partner’s affection or love, she said. Social media, cellphones and other technology have through the years exacerbated the kinds of abuse teenagers experience when dating.

“They believe that I need to give my boyfriend my phone so he can see who I’ve been calling, so he’ll know that I love him or that I’m faithful to him,” Williams said.

Through Lovesmart, Williams aims to shatter these mistaken beliefs by arming young people with knowledge and resources so they can develop healthy dating behaviors and seek help if they’re in an abusive situation.

The organization recently received one of its first donations since becoming a nonprofit from the Walmart Neighborhood Market in Brunswick.

Williams hopes to someday offer toolkits to young people that would include a workbook, information about resources and branded items like Lovesmart water bottles or bracelets. She also envisions eventually opening a center that could provide a safe space with counselors and access to other needed resources.

Over 1.5 million teens are abused annually, Williams said, and Georgia ranks No. 1 in the nation for teen dating abuse for ages 16-24.

When speaking to young audiences, Williams relies on the power of her survival story and on statistics that demonstrate how prevalent domestic violence is.

Studies show that one in three women will experience abuse, Williams said, so during a presentation she’ll often ask three young women in the audience to stand up.

“I’ll say, ‘One, two, three — one of these girls will or has been in an abusive relationship,” she said. “… Every time, every time — whether it was verbal, emotional, physical — afterwards they will come and tell me. Every time.”

She also shares stories of families she’s met who lost a daughter or son to abuse.

“I share those stories with them because I want them to know, yet I try to remind myself that they are still young,” Williams said. “I’m just being open and honest with them, and I think they appreciate that more than anything.”

When speaking to young people, Williams hopes to convey that abuse will only worsen if a victim does not seek help. She also encourages them to spend time focusing on personal growth and gaining self-esteem.

“A lot of times they think the jealousy is caring,” Williams said. “‘They just care about me so much, and if he’s not jealous or she’s not jealous then they don’t care.’ It’s manipulation.”

Teen dating violence often manifests itself as toxic behavior that those in the relationship may not recognize as abuse. Part of Williams’ mission is to help teenagers understand the truth and know that abuse can happen to anyone.

Teenagers who feel they or someone or someone they know is experiencing domestic violence are encouraged to call the National Teen Dating Violence 24/7 hotline at 1-800-799-7233.

To learn more about Lovesmart or ways to support Williams’ mission, visit lovesmartinc.org or email lovesmartinc@gmail.com.