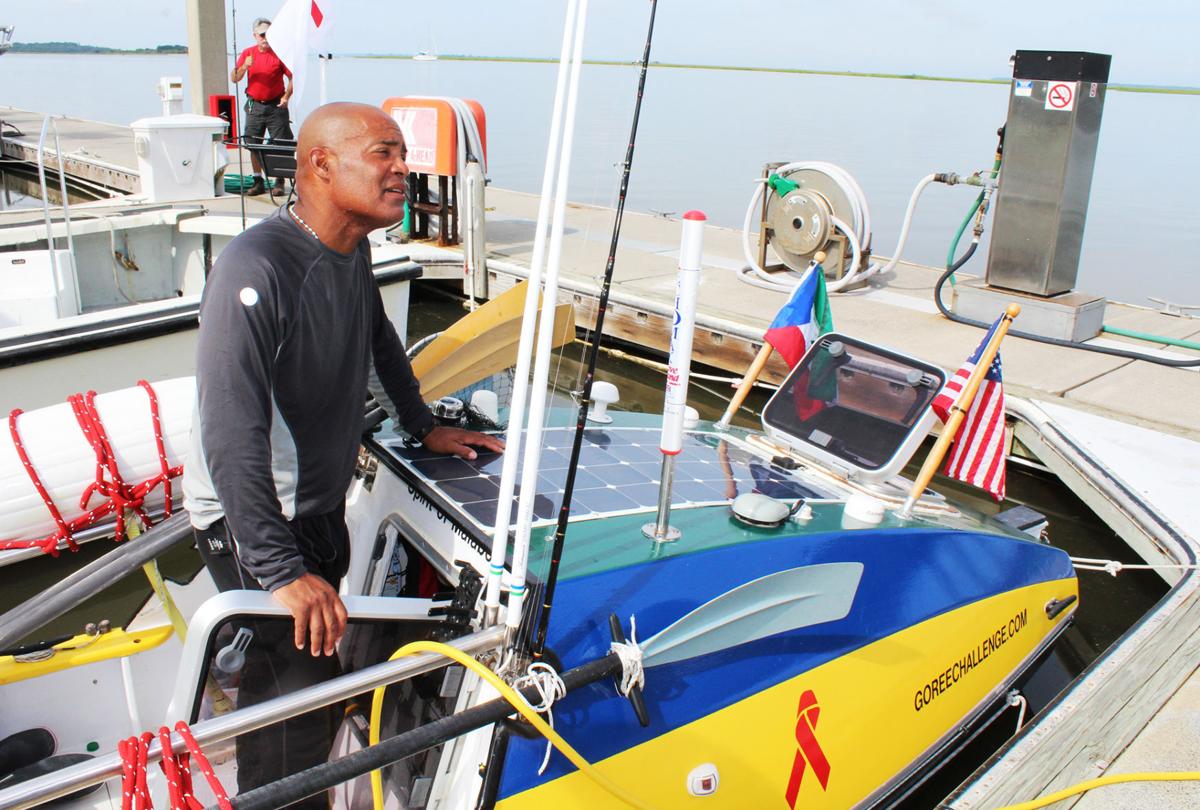 Victor Mooney stands on his boat Tuesday at Jekyll Harbor Marina after crossing the Atlantic Ocean on his 24-foot row boat. 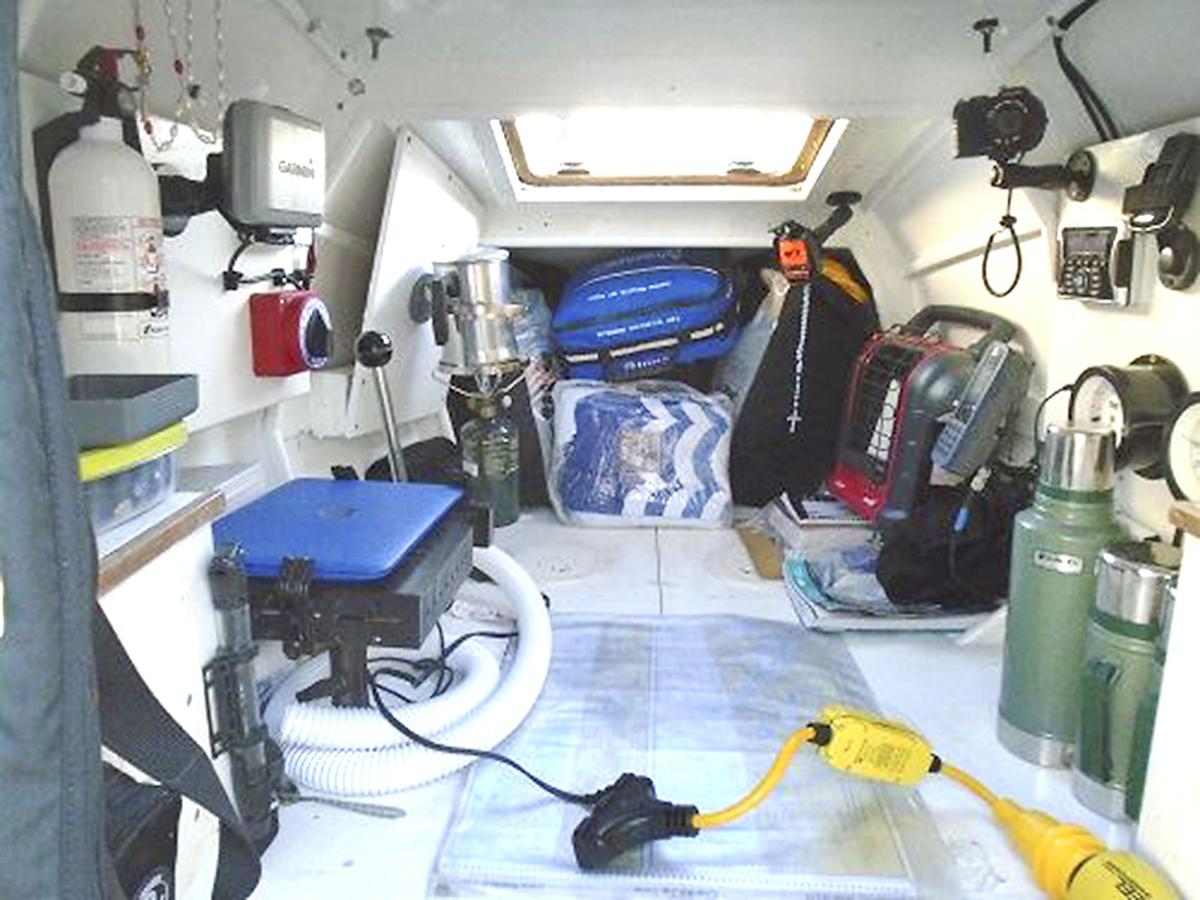 Victor Mooney’s sleeping/living compartment on the boat he used to row across the Atlantic Ocean is shown.

Victor Mooney stands on his boat Tuesday at Jekyll Harbor Marina after crossing the Atlantic Ocean on his 24-foot row boat.

Victor Mooney’s sleeping/living compartment on the boat he used to row across the Atlantic Ocean is shown.

A Brooklyn, N.Y., man beached on Jekyll Island Monday night, resting for the final leg of what he called his journey home after rowing across the Atlantic Ocean to raise awareness and encourage voluntary HIV testing.

It’s proven to be quite the adventure, a story the 49-year-old public relations specialist says includes attacks by sharks and pirates.

This was Victor Mooney’s fourth attempt since 2006 at the long journey, having failed the first three times.

The AIDS activist says he is driven by a cause. Mooney’s brother died from AIDS in 1983, and he has another sibling who is living with the virus.

“I thank God that I have the strength to continue this mission. I want to get the word out that people need to get tested for HIV. They do not need to be afraid to get tested,” Mooney said.

According to Mooney, it took 130 days to row across the Atlantic Ocean in his 24-foot craft, the ‘Spirit of Malabo.’ He reached St. Maarten in the French Caribbean in late June of that year.

Mooney’s trip across the ocean took him through days of loneliness, hunger, storms and even a shark attack, he said.

Barnacles proved to be a life safer.

“It was hard, well pretty much impossible, to clean all the barnacles off of the boat,” he said. “Smaller fish would come up to the boat and feast off of them, making it easy for me to catch some dinner. It also made the boat a buffet for larger fish, including a white-tipped oceanic shark that took a bite out of my boat along with his dinner,” Mooney said.

He was able to repair the side of his boat with some supplies that he had on board, he said.

A satellite communication system that included intermittent Internet and phone service enabled him to stay in touch with his support base, even in the middle of the ocean.

If you were journeying across the Atlantic and could take very little along, what book would you pack?

“I read it from front to back, gaining strength from God’s word to complete my trip,” he said. “I also had an mp3 player for some music but headphones are not very comfortable and it’s hard to hear out on the open ocean.”

While boat barnacles made it easier to catch fish along the way, rations he packed ran out very quickly.

“I misjudged how many calories I would burn doing this and ran out of food on the trip across,” he said.

When Mooney arrived in St. Martin, he had lost 80 pounds. Dehydrated and exhausted by the transatlantic journey, he stayed a little over a month for rest, rehabilitation and boat repairs from the shark attack.

Mooney’s journey next took him to the British Virgin Islands, Puerto Rico and the Dominican Republic. Off the coast of Haiti, pirates robbed him and damaged his boat.

“The Father was watching over me. It was a horrible experience and I was glad to come out of it alive,” Mooney said.

He and the boat were taken to Miami, where it was repaired and made ready for the last leg of the trip – home to New York.

It took several months to repair the boat. In the meantime, Mooney went back to New York, continuing his fight to make people aware of HIV testing, even going to Washington, D.C., and the White House.

The trip from Miami is expected to take 60 to 90 days. But things don’t always go as planned.

“I am not the navigator, God is. This will be completed in his time, not mine,” he said.

Mooney will travel up the Intracoastal Waterway until he reaches the Chesapeake Bay and will then travel on to New Jersey and New York.

Would he do this again?

“The only transatlantic boat trip I plan to make in the future is on the Queen Mary.”

Reporter Donna Stillinger writes about government and other local topics. Contact her at dstillinger@thebrunswicknews.com or at 265-8320, ext. 321.

Refitted with a new cradle designed to accommodate damage, a dry dock barge received the next-to-last section of ship wreckage from the Golden Ray at around noon Saturday.

Health System Nurses Serving Others with Compassion and Empathy

Visitors at St. Simons Presbyterian Church have recently noticed a thing some would find disquieting. Sometimes a light haze comes from the air vents and settles over the sanctuary.

A coordinated effort to increase the vaccination rate in Glynn County is directing its focus on fighting misinformation and addressing the fears of the unvaccinated.

Habitat for Humanity to dedicate home

Habitat for Humanity of Glynn County will dedicate its 88th home at 2 p.m. Oct. 3 at the house on Reynolds Street, Executive Director Becca Randall said.

Brunswick firefighters arrived at a burning home Thursday afternoon to find three people standing outside, distraught over the fate of a four-legged family member that was trapped inside.