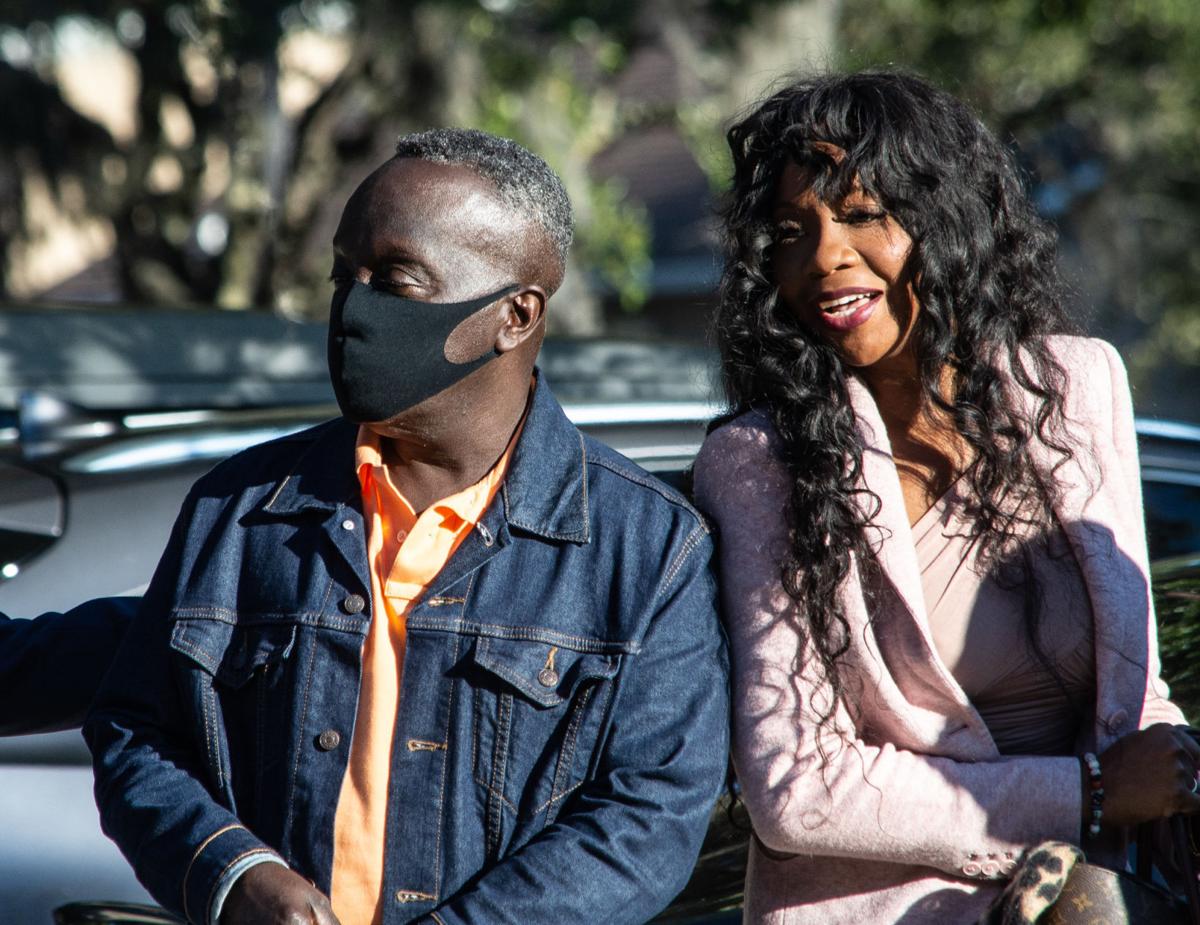 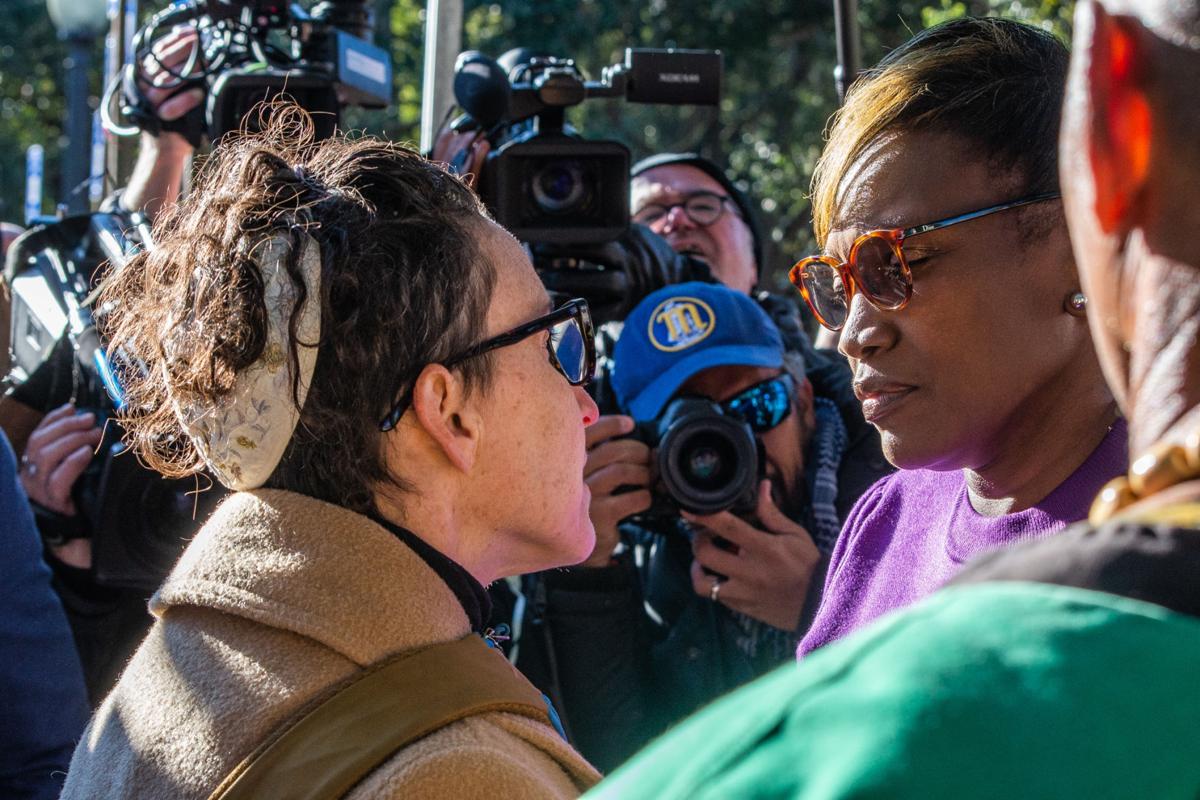 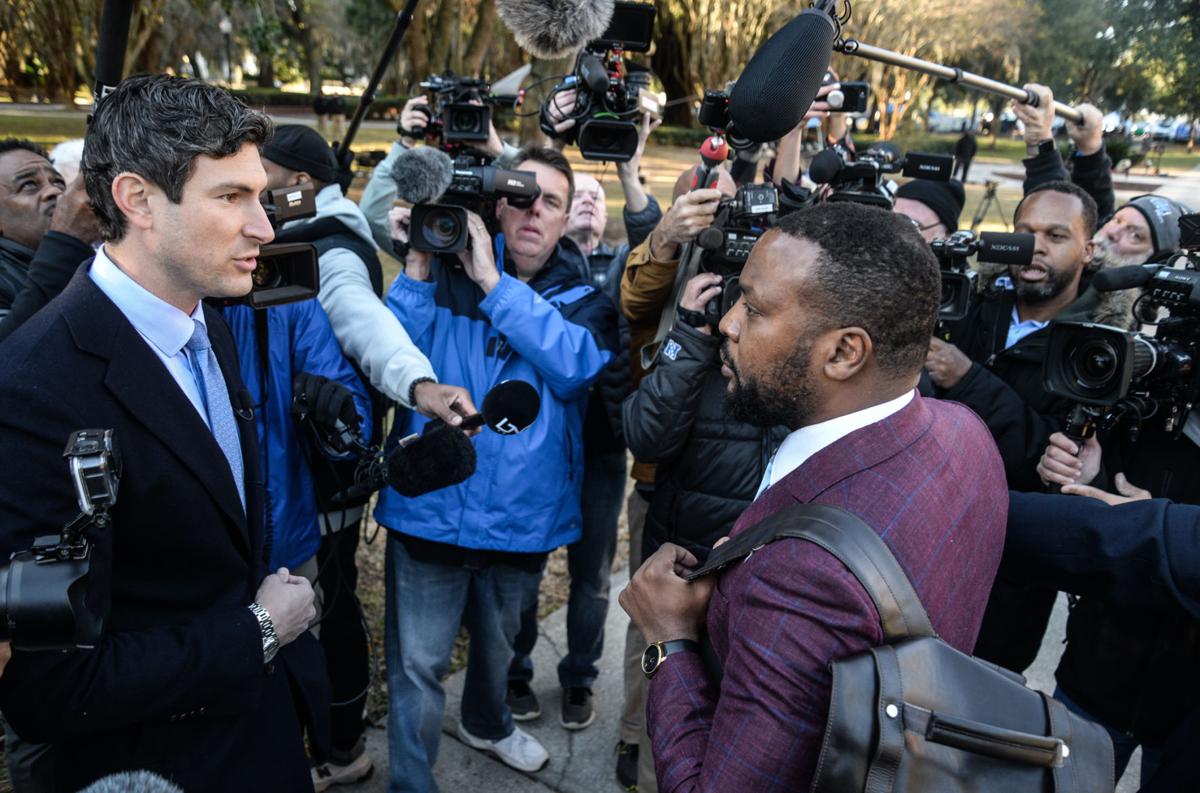 Ben Crump, one of the Arbery family lawyers, right, said the prosecution had a rare opportunity to plan overnight its rebuttal of defense arguments made Monday. Normally, the prosecutors have a very short time to respond to defense lawyers' remarks to the jury, he said.

Ben Crump, one of the Arbery family lawyers, right, said the prosecution had a rare opportunity to plan overnight its rebuttal of defense arguments made Monday. Normally, the prosecutors have a very short time to respond to defense lawyers' remarks to the jury, he said.

The case of three White men accused of murder in the killing of a 25-year-old Black man is now in the hands of a jury, which deliberated for more than five hours Tuesday before breaking for the night without having reached a verdict.

Deliberations will resume at the Glynn County Courthouse at 8:30 a.m. Wednesday.

Travis McMichael, 35, his father Greg McMichael, 65, and 52-year-old William “Roddie” Bryan are charged with malice murder and felony murder in the shooting death of Ahmaud Arbery on Feb. 23, 2020, in the Satilla Shores neighborhood. The three men additionally are charged with aggravated assault, false imprisonment and criminal attempt to commit a felony.

Travis McMichael shot the unarmed Arbery with a 12-gauge shotgun as the two men struggled for possession of the weapon on Holmes Road near Satilla Drive. The shooting concluded a harried chase in which the three men pursued Arbery in two pickup trucks as he ran through the neighborhood for several minutes.

Defense attorneys maintained Arbery died as a result of self-defense while the defendants were in the course of effecting a citizen’s arrest for suspected property crimes. Prosecutors with the Cobb County District Attorney’s Office said Arbery was hunted, trapped and murdered while jogging on a public street.

In her final closing statements Tuesday morning, senior assistant district attorney Linda Dunikoski with the Cobb County DA asserted the defendants had no reason to assume Arbery had committed a crime.

The McMichaels said they suspected Arbery of property crimes based primarily on his appearance several times on surveillance video at a home under construction at 220 Satilla Drive. Property owner Larry English of Douglas testified that Arbery never stole anything or caused harm at the open structure, an observation Glynn County police officer Robert Rash shared with both of the McMichaels on the night of Feb. 11, 2020.

Dunikoski noted Greg McMichael’s statements to Glynn County police shortly after the shooting in which he could not say whether Arbery had committed a crime.

“Greg McMichael assumed the worst,” Dunikoski said. “That is not sufficient for a citizen’s arrest. This is, I-don’t-know-what-the-guy-was-doing. He was running down the street real fast. He must have done something ... “

The McMichaels armed themselves and began chasing Arbery after Greg McMichael saw him run past their home at 220 Satilla Drive shortly after 1 p.m. on Feb. 23, 2020. Bryan joined the chase when he saw Arbery run past his home at 307 Burford Road with the McMichaels in pursuit.

In her closing, Dunikoski said Bryan and Travis McMichael used their trucks as weapons against Arbery, blocking him from escape on several occasions, as law enforcement investigators testified earlier in the trial. The pursuit ended with Arbery caught between the two trucks on Holmes Road, where Travis McMichael blasted him with fatal buckshot wounds as the two men struggled for possession of McMichael’s shotgun.

Defense attorneys said Travis McMichael relied on his federal law enforcement training as a former U.S. Coast Guardsman to guide his actions during the incident. Travis McMichael was the defense’s lead witness and the only one of the three defendants to testify.

During questioning from attorney Jason Sheffield during the trial, Travis McMichael gave textbook answers to law enforcement queries about use-of-force protocol and probable cause indicators.

But on cross examination, prosecuting attorney Linda Dunikoski portrayed McMichael as a reckless vigilante. She noted Facebook posts in which he urged neighbors to “arm up” and suggested crooks would be “playing with fire on this side of the neighborhood.” Dunikoski also flustered Travis McMichael on inconsistencies between his court testimony Nov. 18 and statements he gave to county police investigators hours after the shooting.

The court proceedings began Oct. 18 at the Glynn County Courthouse with jury selection — a 2 1/2-week ordeal that processed hundreds of potential jurors from among 1,000 jury summonses mailed to Glynn County residents. A jury of 11 Whites and a lone Black juror was empaneled Nov. 3, but the panel’s lack of diversity sparked heated protests from social justice activists, clergy and others.

The trial began in earnest with opening statements on Nov. 5 when defense attorneys and prosecutors with the Cobb County District Attorney’s Office presented their respective cases. Jurors have been tasked with determining whether Arbery died as a result of self-defense or murder.