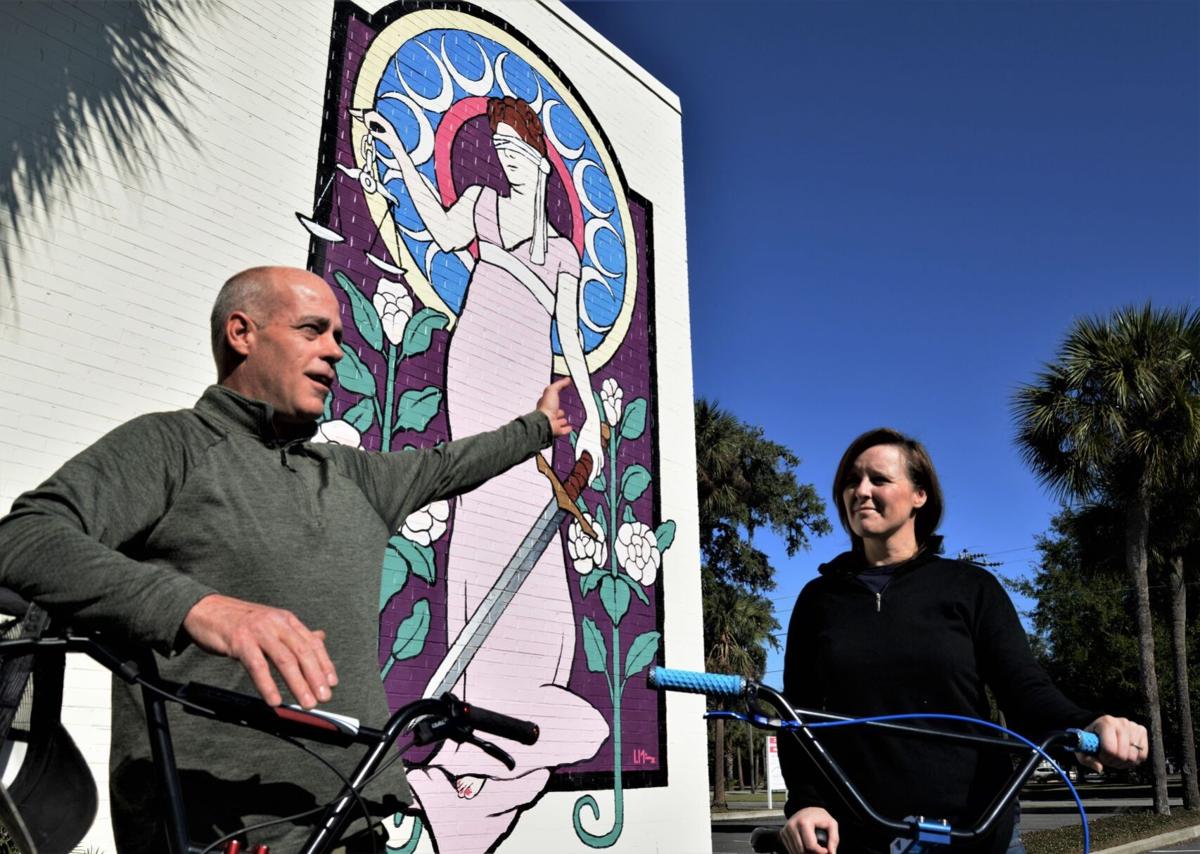 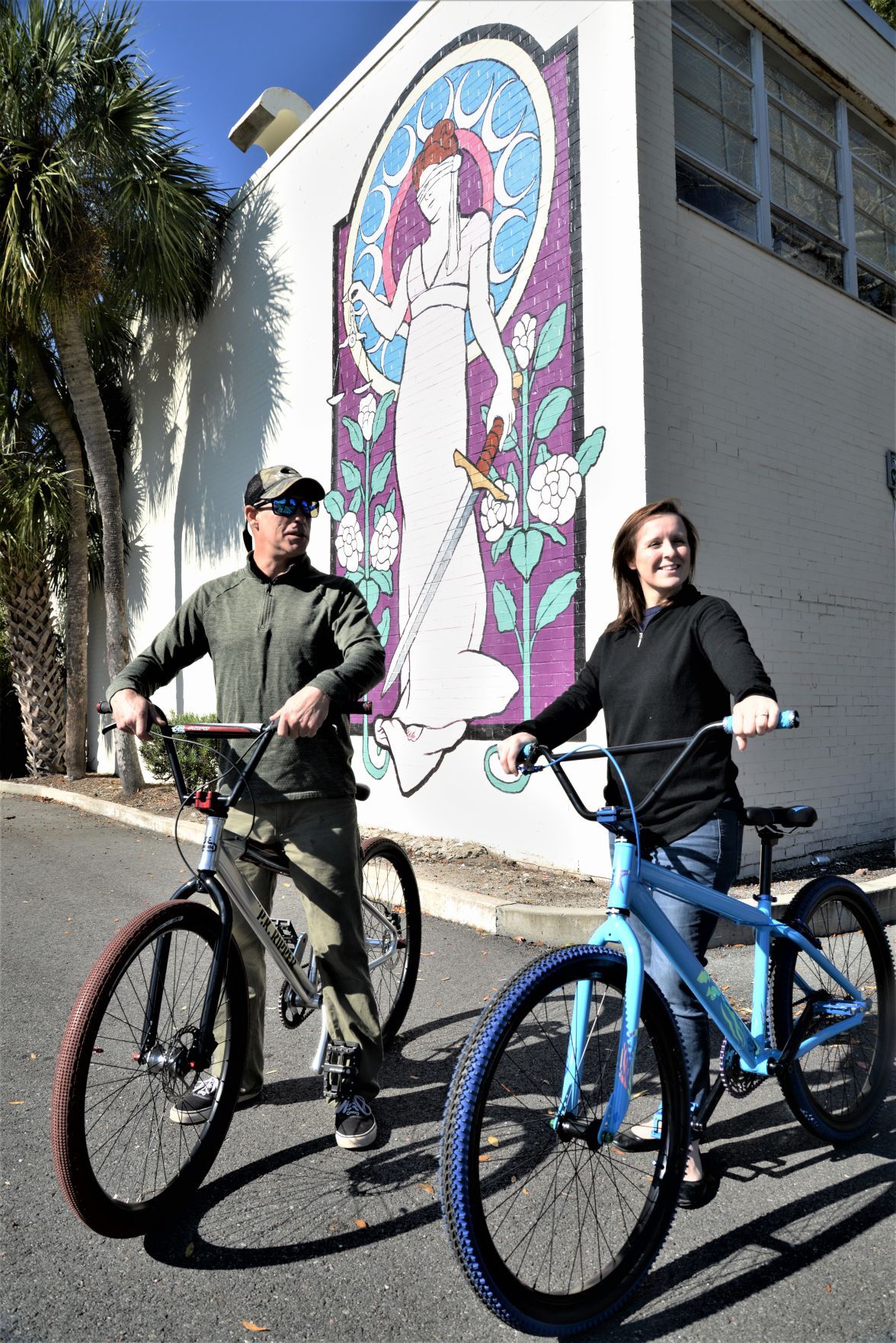 Out of the murals in downtown Brunswick, numbering close to a dozen now, Lady Justice is the standout favorite of local bikers Meghan and Robert McDonald.

A painter herself, Meghan McDonald said the piece by Jeff LeMieux instilled a feeling of security in that, to her, it represented the ideal of blind and impartial justice.

They plan to show off the results of the Brunswick Mural Project to anyone who shows up to a group bike ride around town on Jan. 17.

They picked the downtown murals as their stops for a few reasons, Robert said. Riders will have to climb few hills in Brunswick and the murals are close enough together that stops are frequent, making the circuit accessible to children and older cyclers.

Beyond that, he said it’s a great way to show off the downtown area and draw attention to the hard work put in by artists, city officials and business owners to beautify his hometown.

“I think it’s going to be pretty significant,” Robert McDonald said. “It’s a good little ride, it only takes about an hour, an hour and a half. It’s good for beginners, it’s not fast-paced. It’s on alleyways and side streets, with history and cobbles. It’s a good ride.”

Information on each mural is available on the Brunswick Mural Project section of Glynn Visual Arts’ website, and Meghan said she knows enough about most to discuss them with fellow riders. Each mural is also a potential photo op, she added.

The roughly two-mile ride will start at 1:30 p.m. on Jan. 17 in Mary Ross Waterfront Park and end at the same place.

Everyone is welcome, Robert McDonald said, regardless of age or type of bicycle.

The event caught the attention of a few organizations, including cycling advocacy group Georgia Bikes.

Georgia Bikes plans to offer support for the ride by staffing a tent at Mary Ross Park to provide safety informational material and hand sanitizer to anyone who shows up.

The McDonalds’ ride supports Georgia Bikes’ goal of growing awareness of and participation in biking, not just as a form of recreation but of transportation.

“There has been a bicycle boom that’s happened during the pandemic because people want to get out, they want to get exercise,” said John Bennett, the organization’s safety education programs manager.

With so many more bikers on the roads, it’s more important for the group to agitate for sidewalk and bike trail funding, which benefits more than just cyclers.

“The cornerstone of safety is infrastructure, not just for people to drive but for people who walk and use bikes and wheelchairs and however they get around,” Bennett said.

Typically, local support for such infrastructure improvements start as a grassroots effort, he continued.

“We see that frequently. That’s how what you might call a bicycle culture gets started, it’s one person who wants to share their love of bicycles with others,” Bennett said. “We really love it when people like Robert find ways to get more people biking, they know what people in their community want and what they’re receptive of.”

January’s bike ride is not the only initiative Robert McDonald is engaged in. He spearheaded an effort to build a BMX track at Blythe Island Regional Park but has since put the project on the back burner after making contact with potential investors.

That has allowed him to look into other opportunities, McDonald said, like reviving a mountain bike trail on Blythe Island and building more simple BMX facilities.

He encouraged anyone interested to visit the place it all began, on the Brunswick Bicycle Hub Facebook page.

“I’ve been trying to get amenities for bicycles so this exposure could be good for all cyclists,” McDonald said. “It’s almost become a job that I’m not getting paid for, but I love it.”