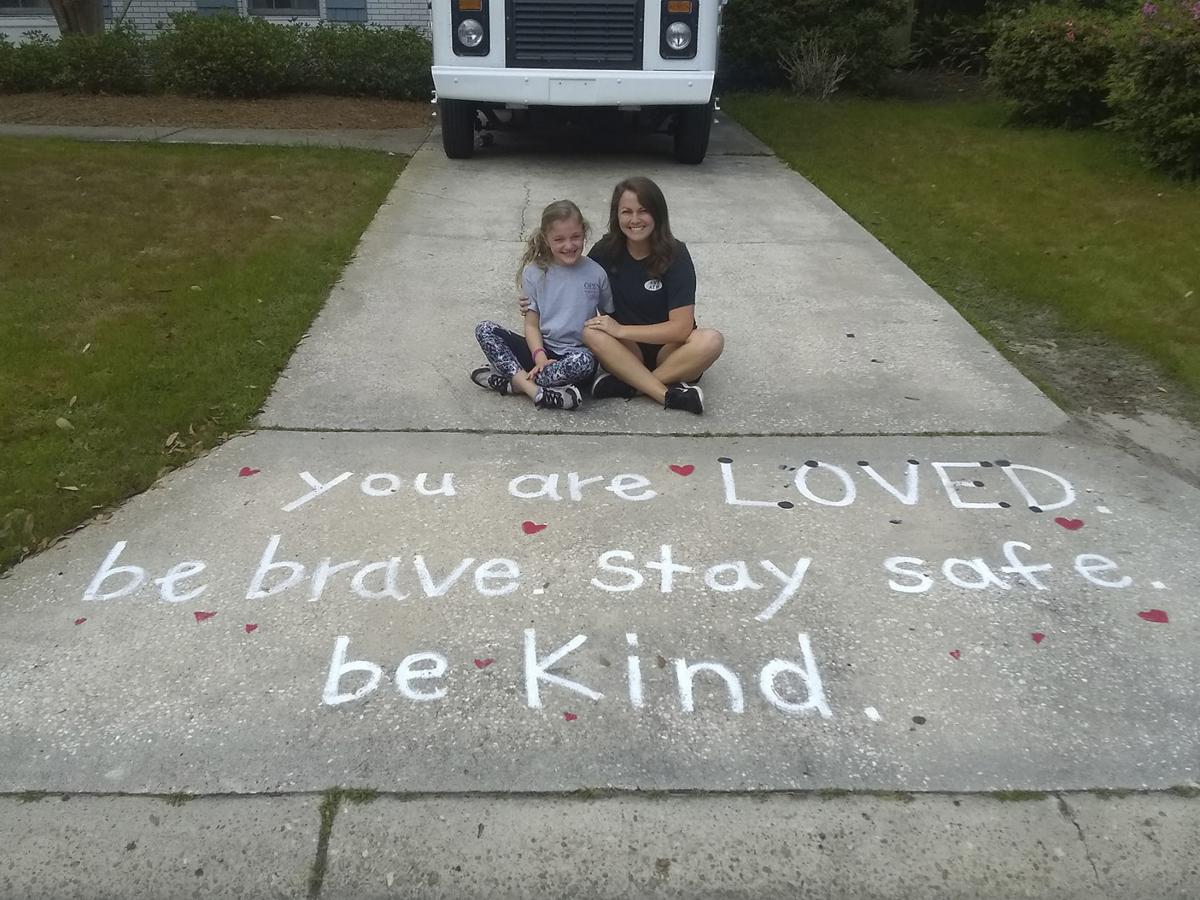 Reagan and Chaney Pope pose next to a chalk message written by Reagan in the wake of the COVID-19 pandemic. 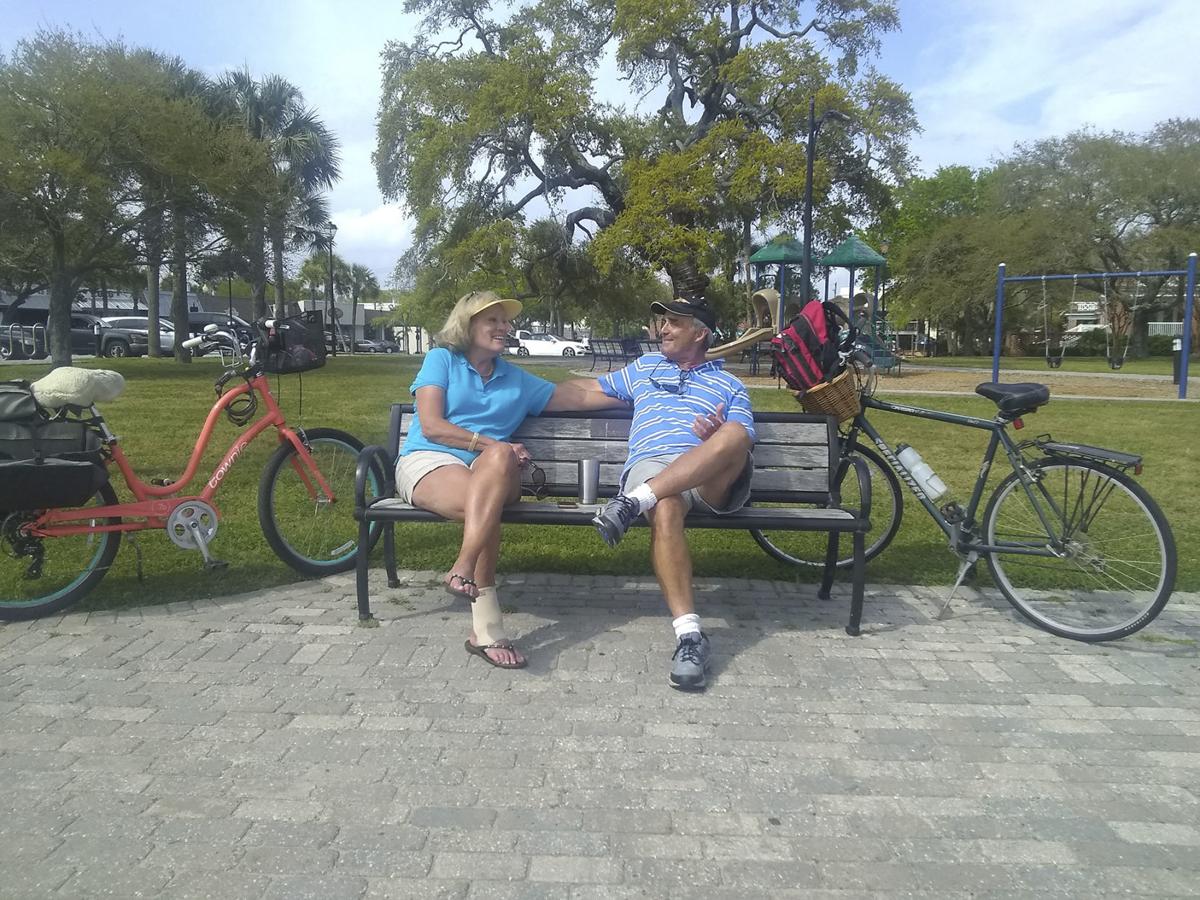 Reagan and Chaney Pope pose next to a chalk message written by Reagan in the wake of the COVID-19 pandemic.

Amid the fear, chaos and uncertainty that presently preside over this crazy grownup world, a child on St. Simons Island had this to say:

Delivered in straight lines of white chalk with a steady and serene hand, Reagan Pope wrote the message on the entrance to the family’s driveway in the Epworth Estates neighborhood. The words are sprinkled with tiny red chalk hearts.

Reagan is smart enough to know that her extended break from Oglethorpe Point Elementary School is not the result of some festive holiday.

So this past weekend, Reagan decided to share of message of hope with the rest of us.

“I’m a little scared,” the 8-year-old said Monday. “I wanted to write it to make people feel happier and calmer while this thing is going on.”

Reagan had a little help from mom, Chaney Pope.

“We’ve just been trying to make the most of this time,” Pope said. “We just wanted to leave a positive message for our neighbors and anybody else who passes by. We were just talking together about what Reagan believes and what I believe about being brave in this time and remaining positive. We’re all in this together.”

Even if that means showing unity at a distance of six paces or better, as recommended by the Centers for Disease Control and Prevention in Atlanta. As of Monday, there were four confirmed cases of coronavirus in Glynn County, 800 throughout Georgia and more than 42,000 cases nationwide.

But there was plenty of evidence Monday that folks on St. Simons Island did not think social distancing meant dropping out of society. While traffic on island thoroughfares was uncharacteristically sparse, the adjoining exercise trails were teeming with bicyclists, joggers and dog walkers of all ages.

Many others busied themselves with gardening and lawn work. And a couple of young middle school boys on Arthur J. Moore Drive have apparently kept up a hoops-shooting marathon on their driveway basketball goal since schools closed.

Farther down the road Monday, Robert Morrissey and his wife Penelope Allingham took Zelda the rescue dog for a romp at Gascoigne Park. Given a choice, they would rather be walking their pit bull mix at the beach on the other side of the island. But the Glynn County Commission closed the beaches to the public on Friday.

They were not alone, Morrissey said.

“This is a pretty nice place. We like it,” he said. “And Zelda recognizes a lot of the other dogs here. We didn’t know the people, but she knew the dogs.”

Zelda also likes to walk on College of Coastal Georgia’s campus near Morrissey and Allingham’s home in Brunswick’s Goodyear Park neighborhood. But …

“Now, of course, the college is shut down too,” Morrissey said. “We tried taking him there the other day and the police stopped us. Who knows what’s next?”

But the couple are by no means taking the coronavirus pandemic lightly. Both are 73. They have been keeping abreast of the latest news from the international to local levels. They are closely following the safety guidelines recommended by the CDC.

Sitting together on a waterfront park bench at Neptune Park near the Pier Village, sweethearts Frank Booker and Carol Ann Cannon did not want anyone coming between them and their view of the ocean — 6 feet or otherwise. The bicycles they rode to get there were flanked on either side of the bench.

“This!” said Booker, 73, his arms outstretched. “Being in the bright sunshine on a wonderful day on St. Simons Island is a terrific way to relieve stress and improve your attitude. There’s nothing we can do other than practice social distancing and try to relax.”

Cannon, 69, a North Carolina resident who makes frequent visits to St. Simons Island, confessed to being upset by the county’s decision to close the beaches. She thinks commissioners overreacted to crowds of college spring breakers.

She said they did not take into account the many mature beach lovers who enjoy the solitude of beach walking and other relaxing activities.

“I think they’re going about it in the wrong way, to close the beach,” Cannon said. “It’s a place to spread out. All they want is to walk on the beach where there is nothing to harm you but fresh sunshine and sand.”