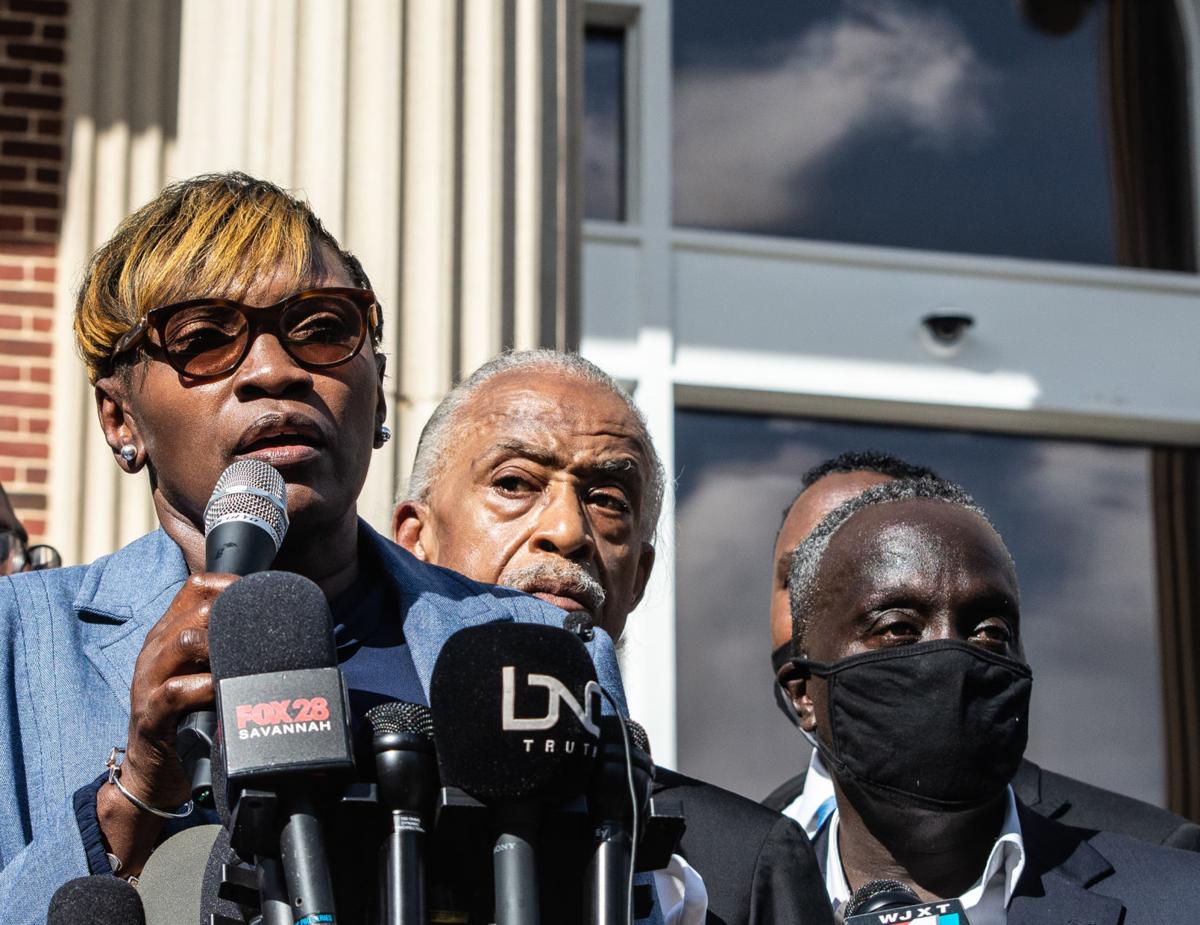 A parade mostly of sign-carrying young people marched from the Glynn County Courthouse to Albany Street and a mural of Ahmaud Arbery on Thursday. 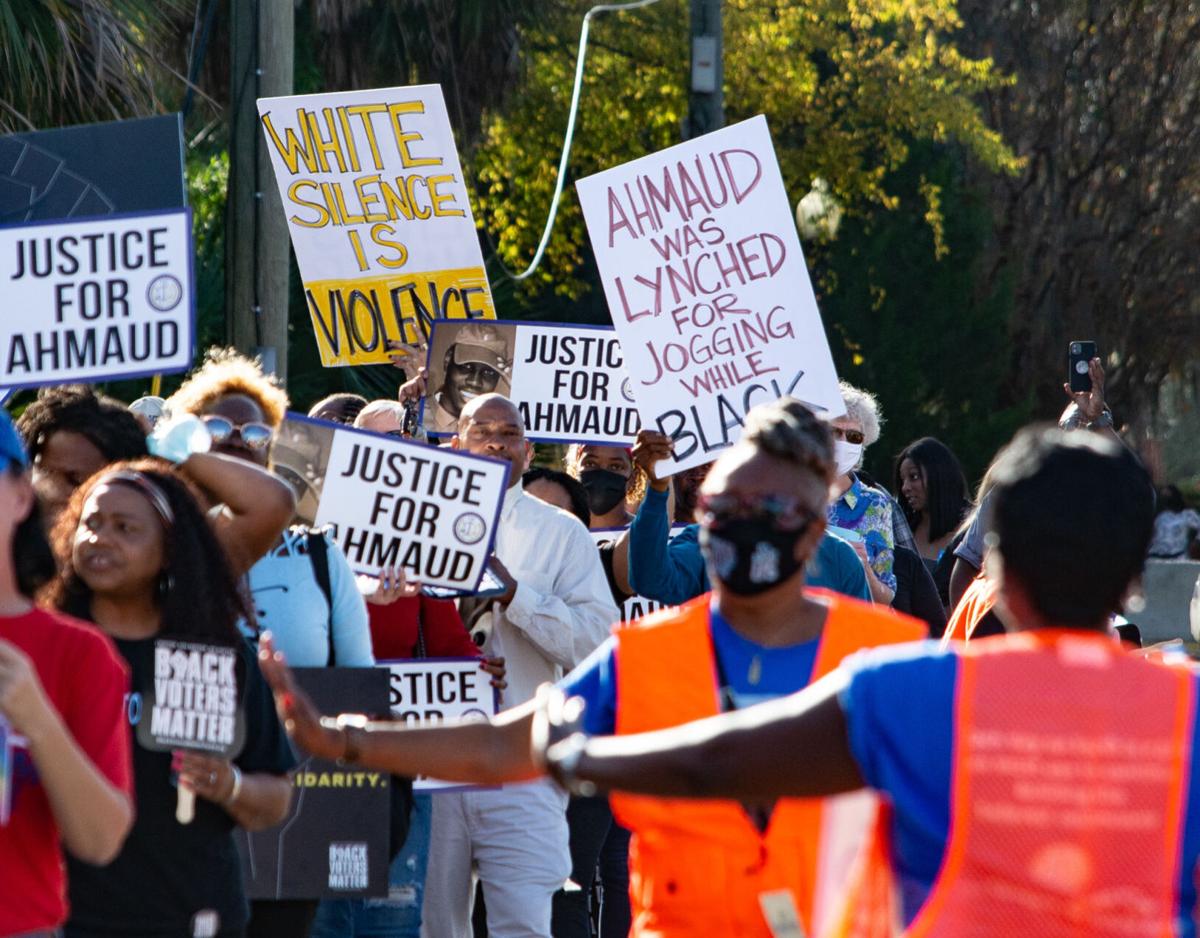 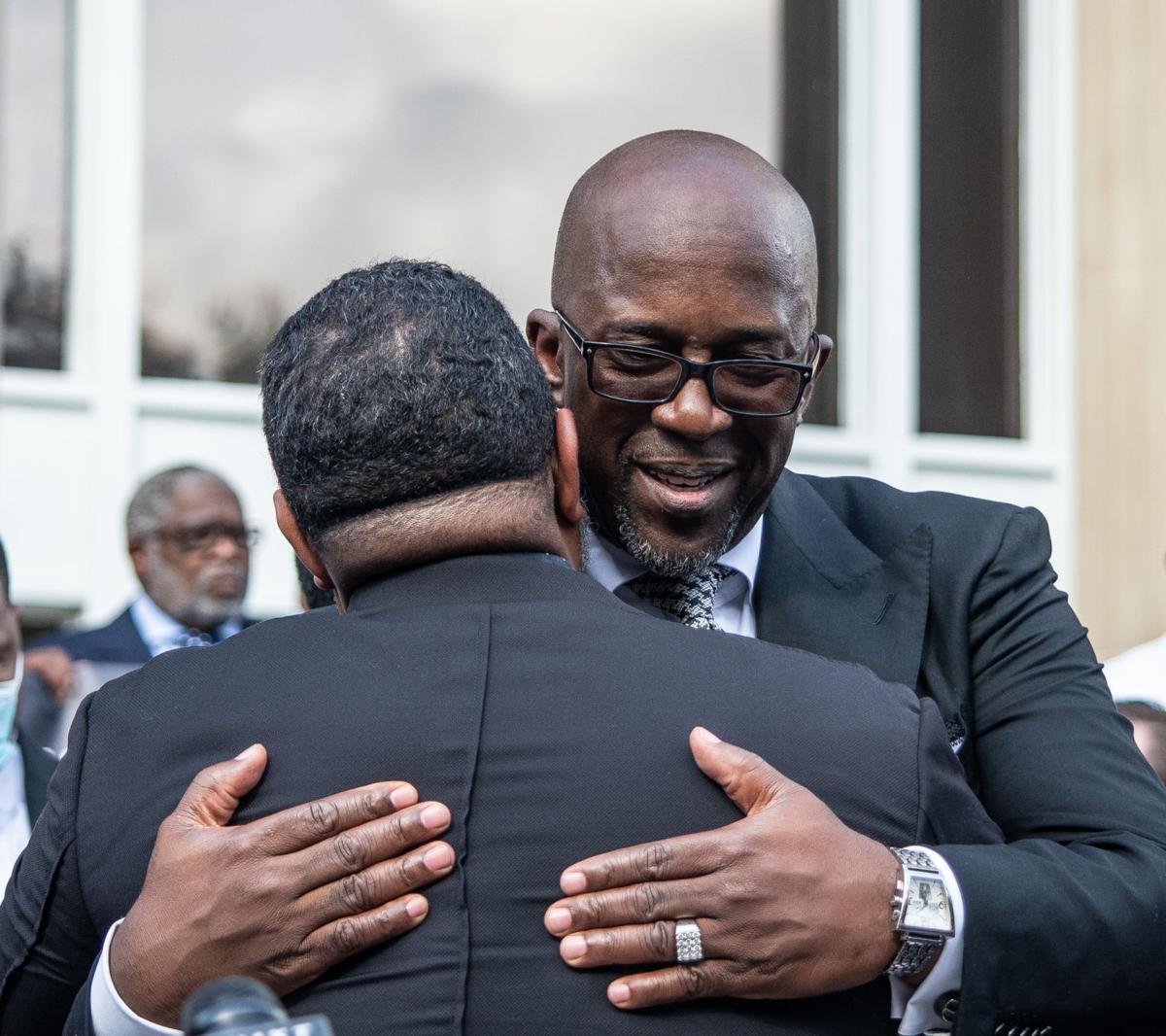 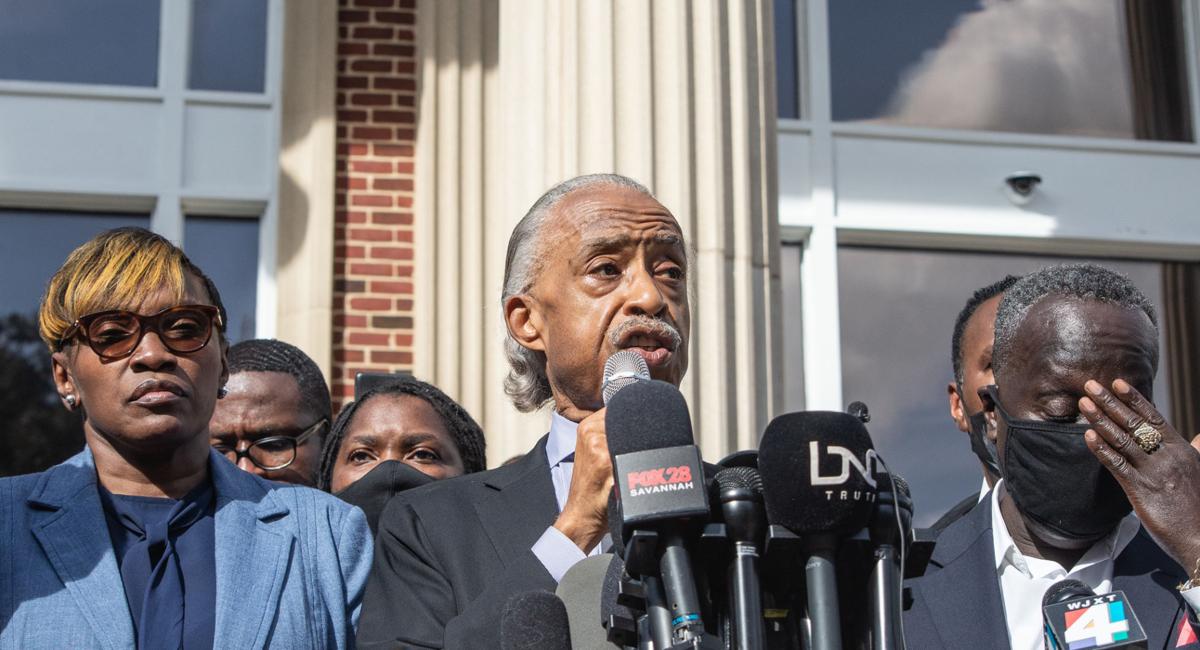 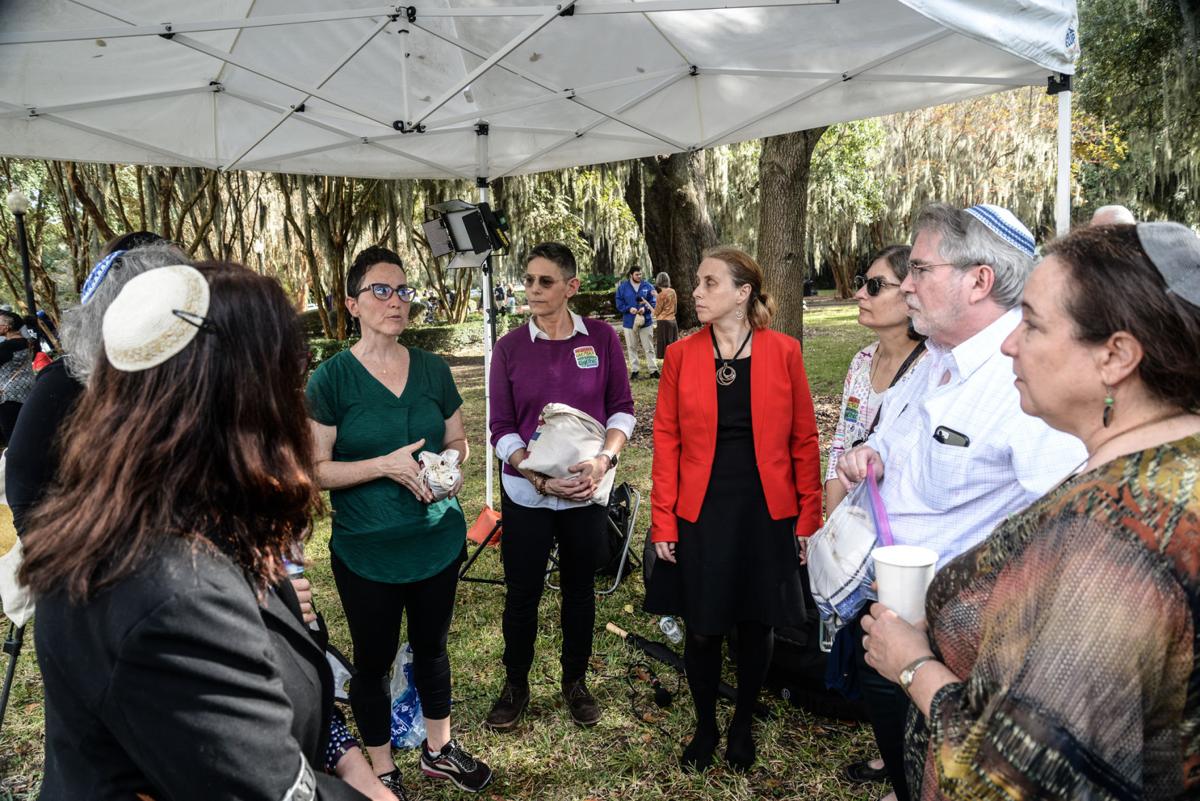 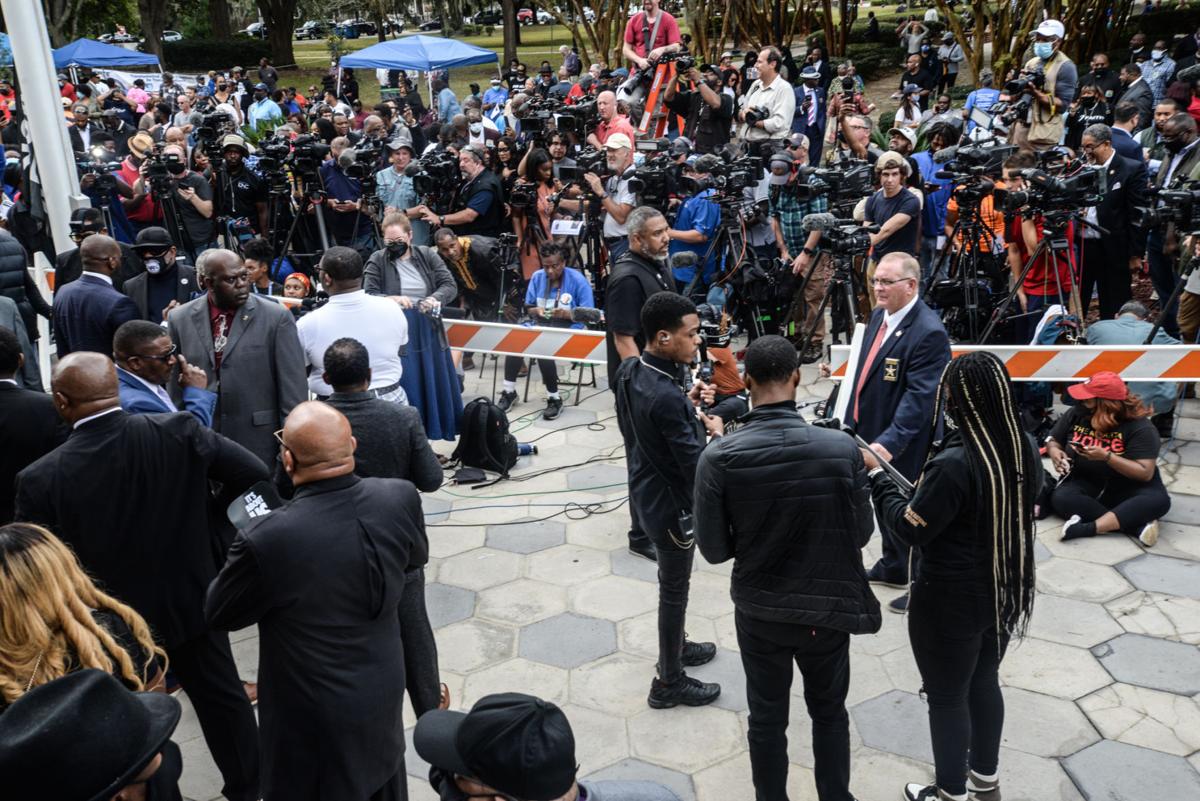 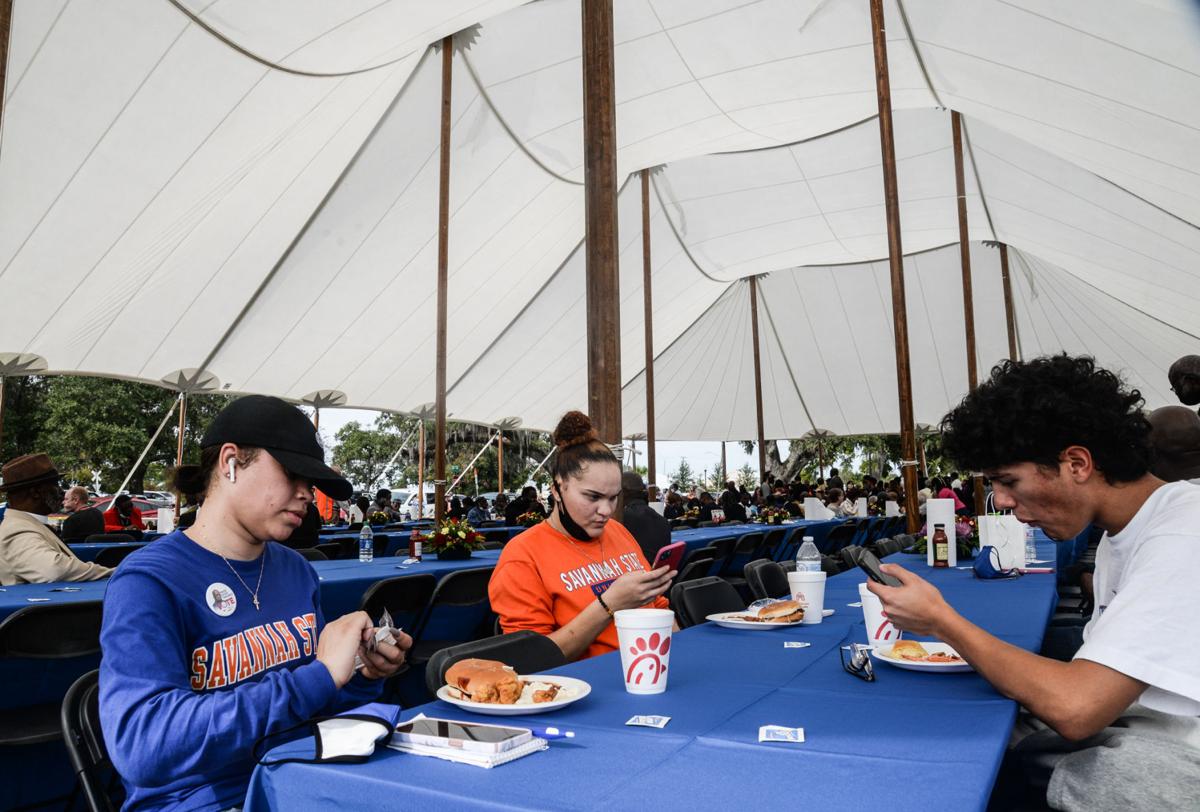 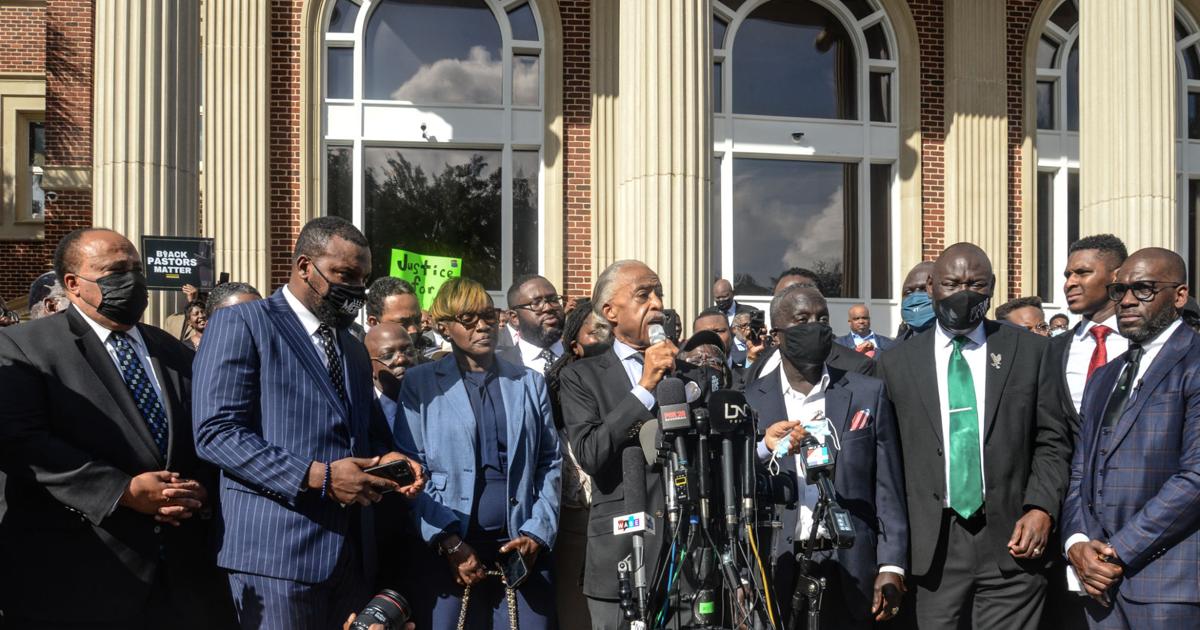 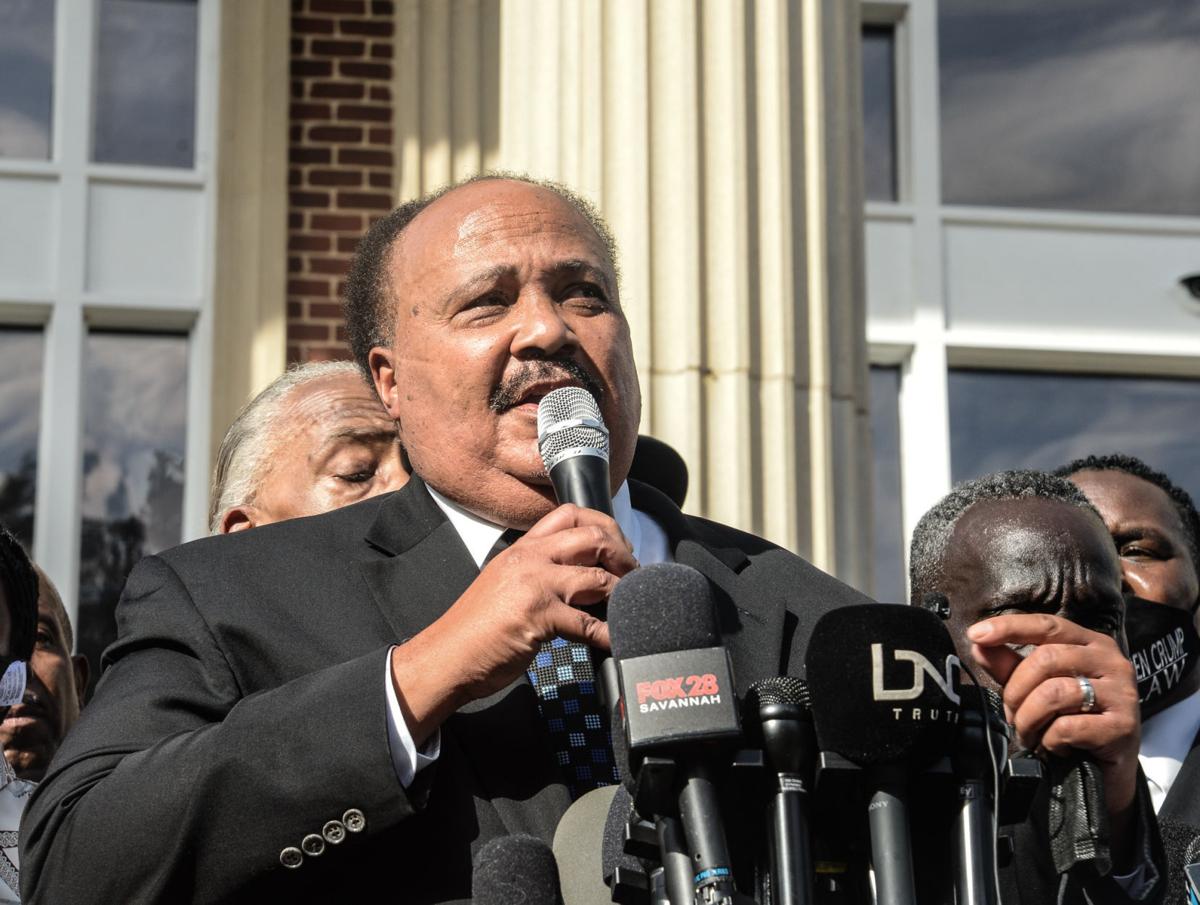 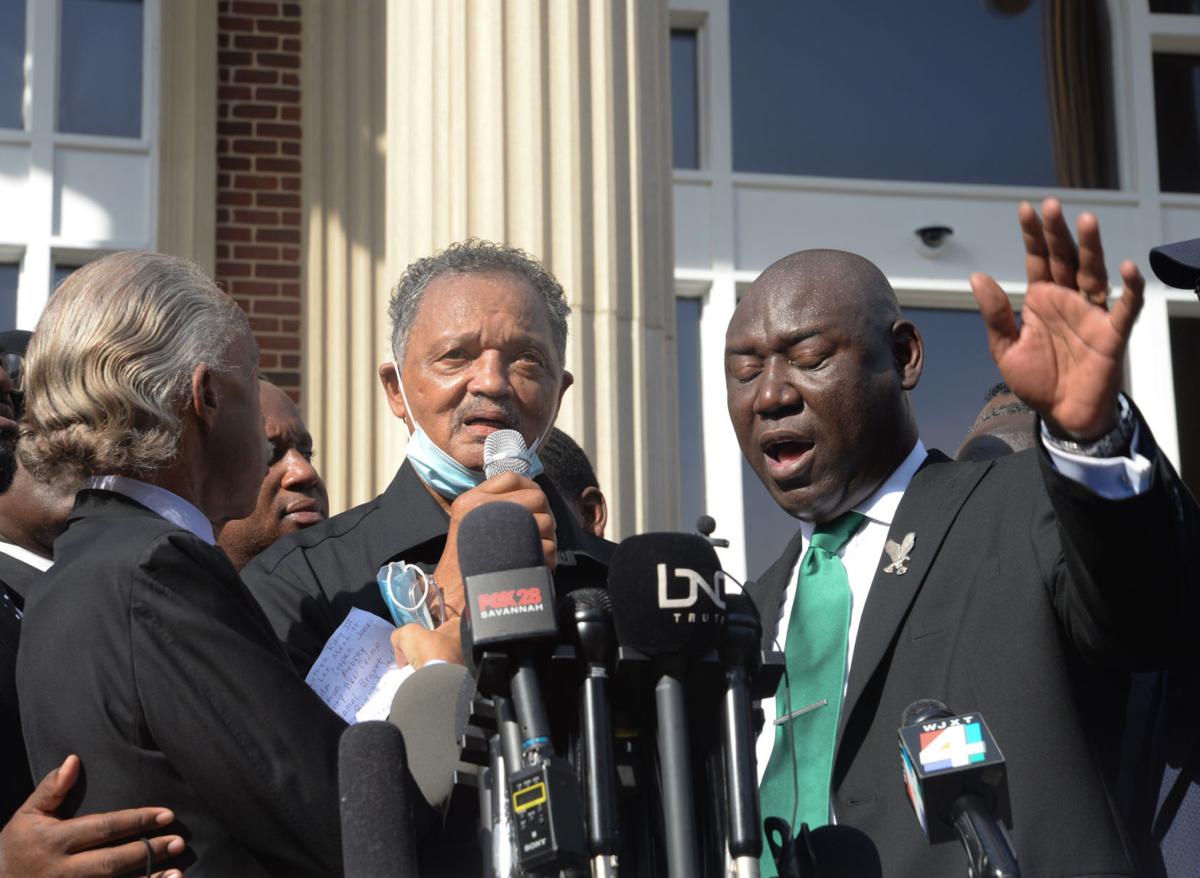 A parade mostly of sign-carrying young people marched from the Glynn County Courthouse to Albany Street and a mural of Ahmaud Arbery on Thursday.

A week after a lawyer representing one of three men on trial for murder in the death of an unarmed, jogger complained about Black pastors in the courtroom, hundreds came from around the country and held a rousing prayer rally in front of the Glynn County Courthouse.

The Rev. Jesse Jackson was in court the day defense lawyer Kevin Gough told the court the Black pastors could influence the jury. Al Sharpton arrived Thursday of last week, sat in court himself and issued a call for 100 Black pastors to join him a week later. They arrived from Seattle, Chicago, Los Angeles, Detroit, Atlanta and cities throughout Georgia, among other places.

The event started around 12:30 p.m. with a large crowd gathering before Sharpton arrived. It continued to grow after his arrival.

“I didn’t come to the courthouse to protest. I came to pray,’’ Sharpton said.

He noted that people had come from all over the country to stand with the family, and he made reference to the defense assertion that the three defendants, Travis McMichael, who is accused of firing the fatal shots on Feb. 23, and his father Greg McMichael, were trying to make a citizen’s arrest because they believed Arbery was responsible for burglaries in their Satilla Shores neighborhood.

The third defendant, William “Roddie” Bryant, followed in a truck separate from the McMichaels and was videoing when the fatal shots were fired. That video is now a main piece of evidence.

Sharpton told the crowd, “You can’t believe the pain of a mother sitting there looking at the killer of her son.”

Wanda Cooper-Jones said she had kept asking questions in her son’s death but got no answers. She and her son lived in a neighborhood across U.S. 17 from the subdivision where he was slain.

Ahmaud Arbery’s father, Marcus, said his son had to “get killed so children can all run and not get shot at.”

He also made a reference to the firearm used to take his son’s life, a 12-gauge shotgun.

“A gun you take down an animal with and you shot him with [it], and you think you did something right?’’ he said.

Texas lawyer Ben Crump, who represents the family, said Cooper-Jones sits quietly in the very back row of the courtroom.

“She’s sitting feet away from the men who murdered her son,’’ he said.

The family has seen graphic details of Ahmaud Arbery’s slaying and sat quietly through it.

Martin Luther King III urged the crowd, “Whenever you see injustice, you must stand up.”

He also said it only takes a few men and women to bring about change and said he had seen that in his father, slain civil rights leader Martin Luther King Jr., and in his mother after his father’s death.

Cooper-Jones returned to the microphone and made a couple of brief remarks before urging the crowd three times to “Say his name.” They responded with shouts of “Ahmaud Arbery.”

Some estimated as many as 500 Black pastors were at the rally, but White clergy from the area were also there as they have been all along. Some of them joined marchers as they chanted and walked from the courthouse to a mural of Ahmaud Arbery.

Among the clergy at the courthouse were about a dozen rabbis and a few cantors from around the country. They are members of T’ruah, an organization of 2,000 rabbis and cantors trained to protect human rights.

Rabbi Carol Glass, who came from Newton, Mass., said she has been aware of the case for a long time.

“I feel like this is part of history that comes before us. The tragedy is it will continue,’’ she said of the pain from Ahmaud Arbery’s death. “I believe everybody suffers.”

She said the case touches her and that she has had an “I run with Maud” sign in her front window for a year.

“I just felt I had to be here. I think there’s something amazing about demanding justice and holding the peace as this community has,’’ she said.

A professor at Savannah State University brought his Mass Communications students to the rally.

Kiara Morris said she came to check out the trial, while classmate Jayden Moore said, “We want to get a feeling of what it’s like in the field,’’ and to see journalists working.

“I told them I was coming down today, and he wanted to come with me,’’ she said of her son. “What’s going on is big. I think they should see this. This is part of history now.”

There may be more history to see. Sharpton said he will keep coming back.

An annual conference open to anyone with an interest in protecting Georgia’s coast will return this February in a virtual format.

Alvin Mack gives Maurice Hughes a buzz cut in a front yard on Cochran Ave. in Arco on Monday afternoon. “I just do this on the side to help some people in the neighborhood,’’ Alvin Mack said. “People who know me.” Mack had his barber chair sitting beside a sidewalk and his scissors, talc, br…

Civics education in Georgia was put in the spotlight Wednesday during an event hosted by the Reagan Institute.

Sen. McNeill will not seek reelection

State Sen. Sheila McNeill, reversing an earlier decision, announced Tuesday she will not seek a second term of office this year.