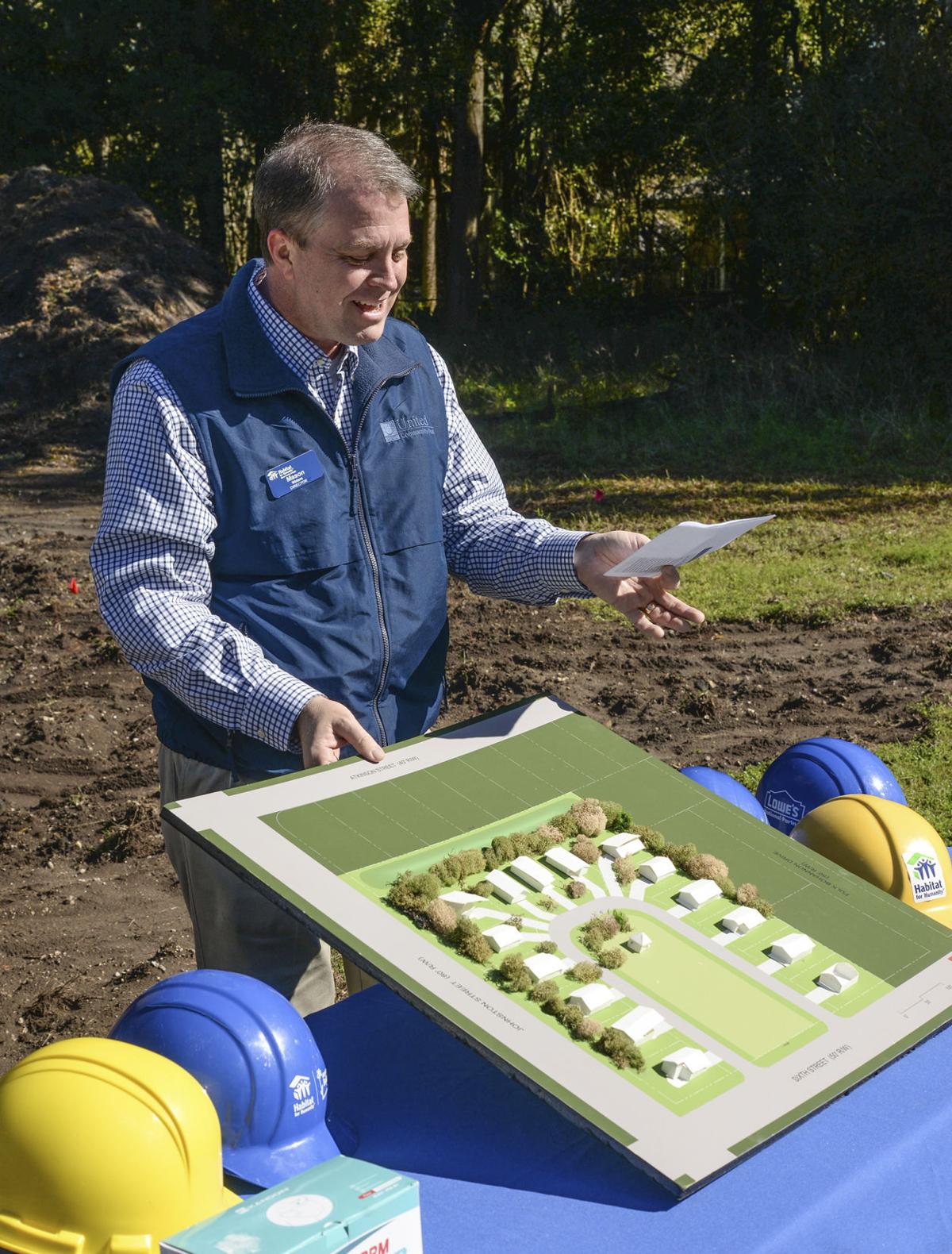 Mason Waters, chairman of the board of Habitat for Humanity of Glynn County, shows off the model for 15-home Century Place on Johnston Street. 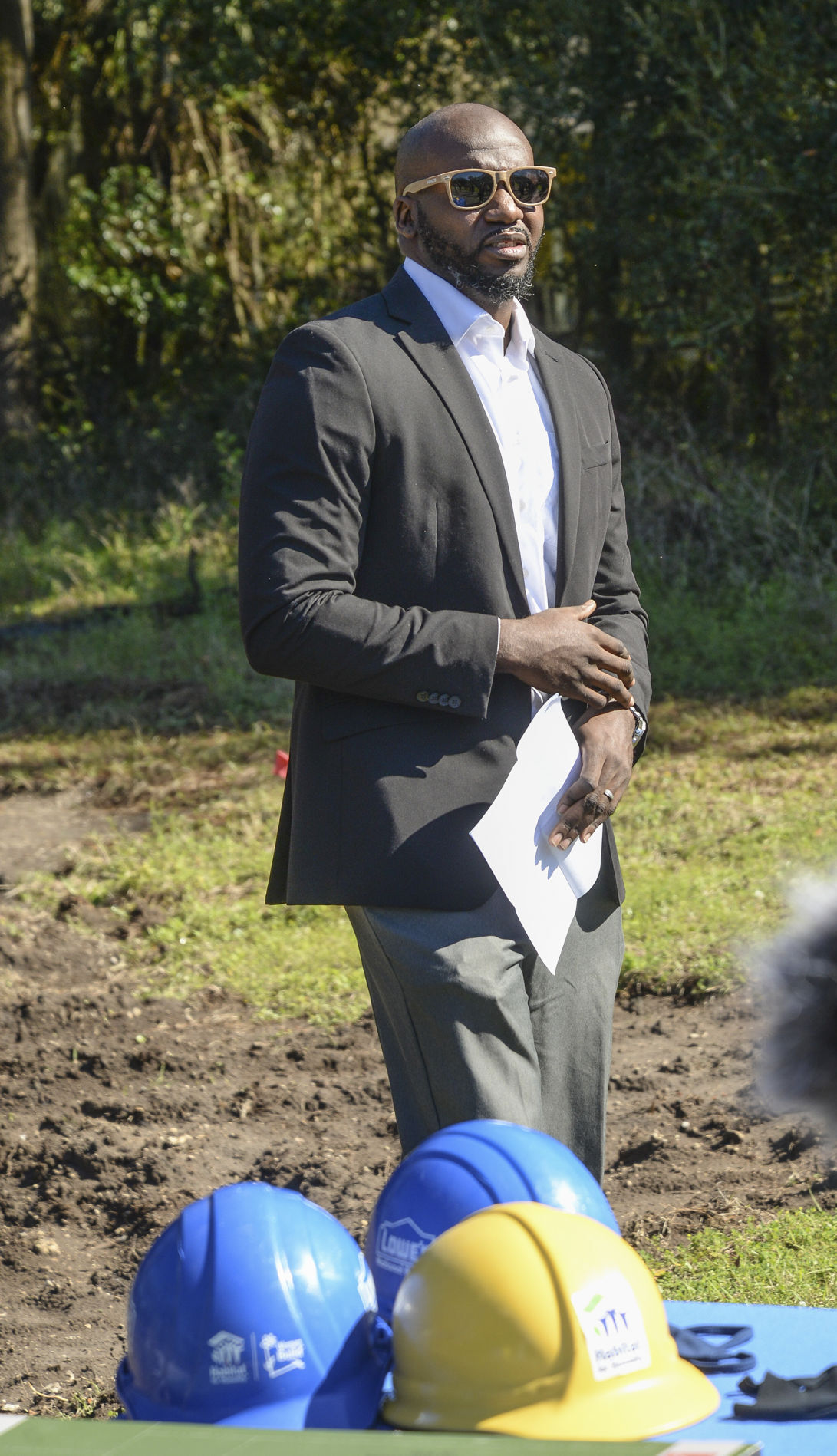 Ben Sterling talks about growing up in a Habitat for Humanity house and the change in made in his family’s life.

Mason Waters, chairman of the board of Habitat for Humanity of Glynn County, shows off the model for 15-home Century Place on Johnston Street.

Ben Sterling talks about growing up in a Habitat for Humanity house and the change in made in his family’s life.

As a fourth-grader, Sterling hammered away with his mother Rosemary Flowers on a Habitat home that would be home to them and his two brothers. A graduate of the University of North Carolina, he is now director of retail operations at the St. Simons lighthouse and visitor center.

On Thursday, he spoke at the groundbreaking for the Habitat affiliate’s most ambitious project ever, the 15-home Century Place it will build on four acres on Johnston Street a couple of blocks west of Brunswick High.

Habitat acquired the formerly wooded undeveloped lot in 2019 with funding from donors and grants, and it is a short distance from Brunswick High, College of Coastal Georgia, the Boys & Girls Club, restaurants and grocers.

It will be the first Habitat project with a homeowner’s association, said banker Mason Waters, chairman of the affiliate’s board of directors.

“We’re going to make sure this is kept cut and clean,’’ and the homeowners association will assure that, he said.

But the association dues won’t be onerous because, Waters said, “We’re not going to burden them with anything unnecessary.”

This is a big step for Habitat because its biggest project to date had been “three houses in a row’’ on Cleburne Street west of Gloucester, Waters said.

Waters said he believes the Habitat staff has the first four homeowners identified, and that some dropped back on the waiting list for homes because they wanted to be part of the new neighborhood.

Jonathan Roberts, who helped design the project, told Waters the four acres looked larger now than it had when only partially cleared.

Waters said the roads, water lines and other infrastructure should be in place by midsummer and that work can begin soon after with a blitz build in which teams of volunteers work on several homes at once.

“I’ll bet we have a flurry of new volunteers,’’ Roberts said.

As Waters addressed a crowd of supporters and local government officials, he said the project had been talked about for years and with contractor J. Hires Company Inc. ready to get to work, they didn’t stand on ceremony before starting land clearing.

“There is still substandard housing and unsafe housing in Brunswick,’’ he said.

Waters said Habitat takes care in selecting its home sites so as to not build in high-crime areas.

“We didn’t want to take a family out of one unsafe situation and put them in another,’’ he said.

As officials mulled over a design that would make the common green space easily accessible to all the homeowners, interim Director Becca Randall drew a solution, he said.

“Becca Randall got a piece of paper and said, ‘Why don’t we do this?’’’ and drew the basis for the design, Waters said.

She called it a “God nudge” that compelled her to put her simple but effective vision on paper.

Harland Hambright took the design and turned it into a model with the houses facing the U-shaped drive that Waters tilted toward the crowd during his talk.

He thanked Ben Slade and Jack Hartman for seeing Glynn County’s need for a Habitat affiliate in the mid-1980s and getting it started.

“Habitat is more than just a home. Habitat is a safe place for a family to raise their children and not worry about the house,’’ he said.

Sterling noted there was not much there Thursday, just an empty lot, “but it’s a beautiful empty lot.”

He said he could envision what it will be like.

“I see kids chasing each other, families cooking their first dinners in a Habitat house,’’ he said.

He also recalled what home life was like before his mother moved her three sons into her Habitat house.

“I used to see the ground through holes in the bathroom floor,’’ he said.

“It was the first time I had my own bedroom,’’ he said.

The owners of Habitat houses have to put in sweat equity working on theirs and other projects. Nobody broke a sweat at the groundbreaking, but Sterling said he was glad to participate.

“I want the community to know that the change Habitat talks about is real,’’ he said.

“Things like this are just good,’’ Sterling said. “Being able to be a part of something like this is huge.”

Twenty-seven years later, his mother still lives in her Habitat house that she paid off three years early, and it’s the place her now far-flung family still calls home.

Waters told the crowd the groundbreaking wouldn’t be the last time they heard from him.

Sometimes people have a need to change course in their lives, and that’s precisely the case for Robert Echols. Robert, who with his wife, Wendi, and their sons, Kaemon and Reagan, recently opened the new Pedego Electric Bike store on St. Simons Island, had a great career with a leading mecha…

When schools pivoted abruptly in March 2020 to at-home learning in Glynn County, many educators began to think of ways to make the final months of the year special — especially for high school seniors.

Coastal Georgia’s voice in the U.S. House is a co-sponsor of legislation that would strip Major League Baseball of its antitrust exemption.

The initial paving of a roundabout at the intersection of Kings Way and Frederica Road will begin Monday.

Music in the Squares series to celebrate city's 250th anniversary

Music has the power to evoke a memory and capture the feeling of a moment.