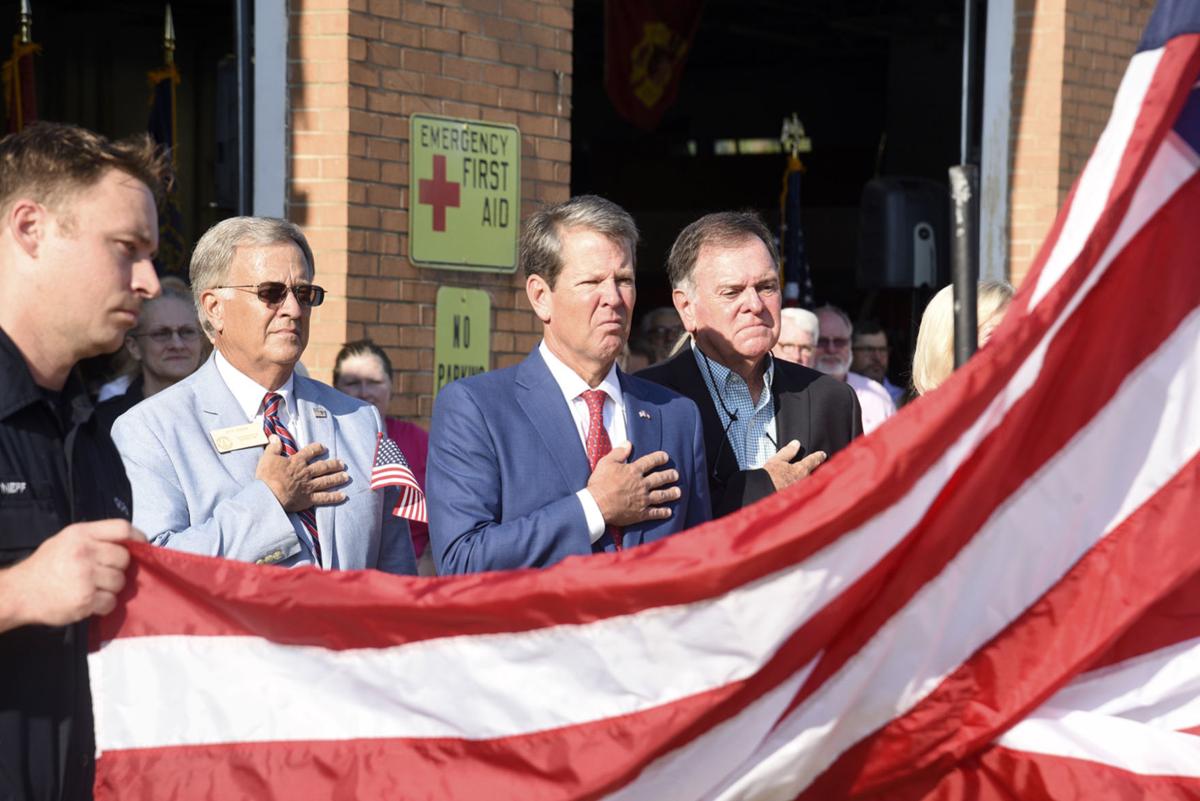 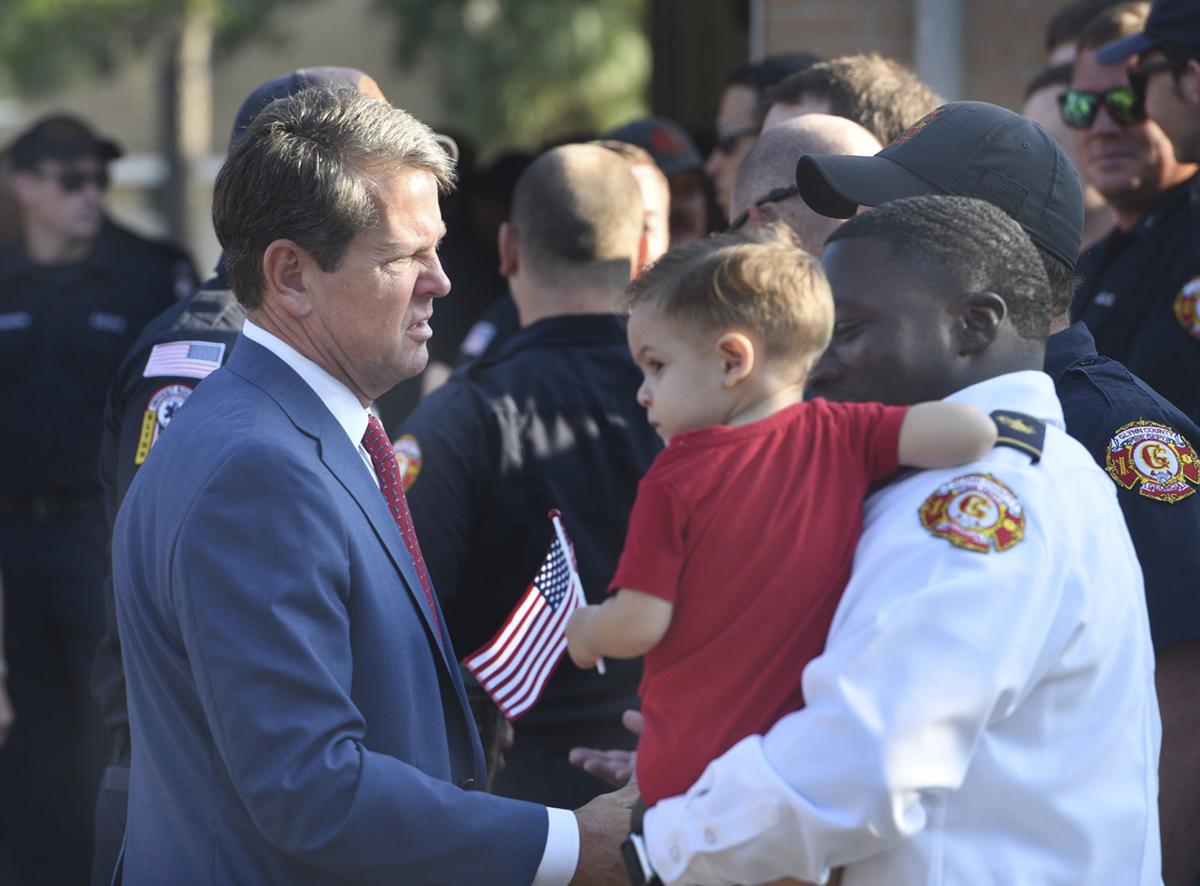 Georgia Governor Brian Kemp shakes hands with firefighters before the 9-11 Honor and Remembrance ceremony at the Ballard Fire Station Wednesday. 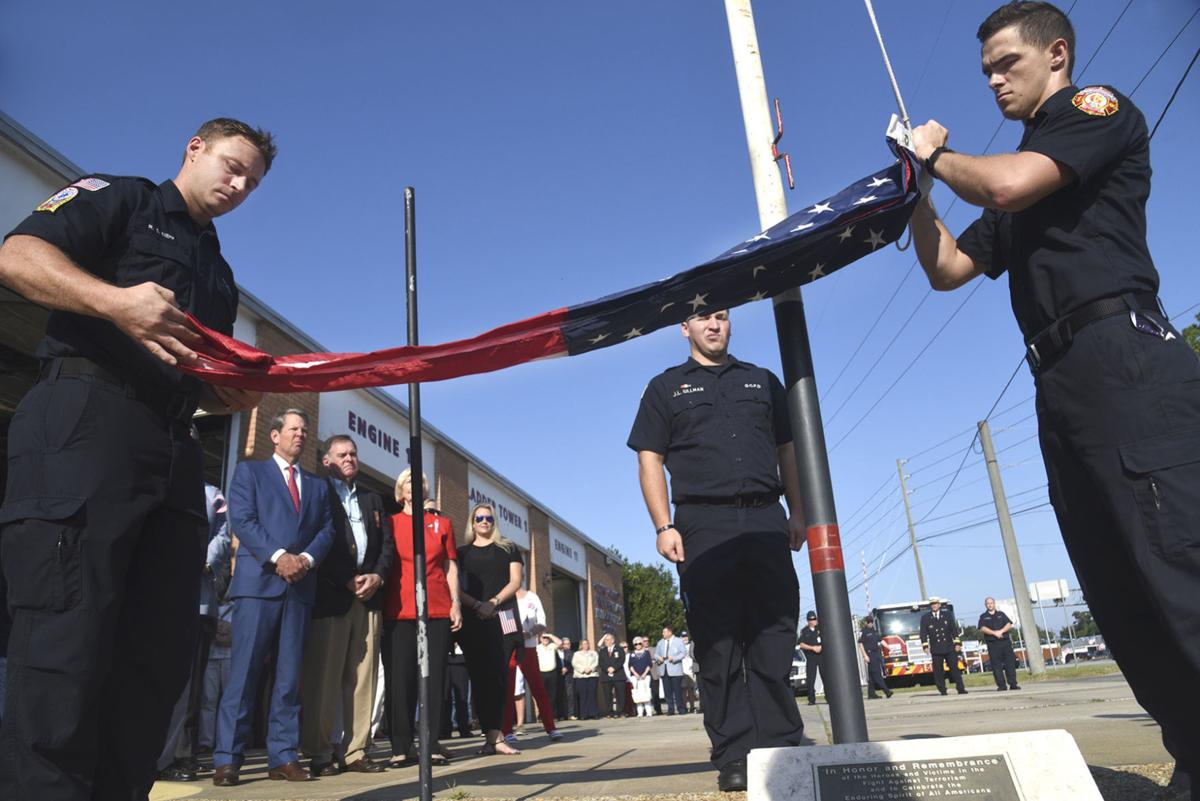 Georgia Governor Brian Kemp joins local dignitaries as they watch Glynn County Firefighters Ryan Neff, from left, Joshua Gillman, and Hunter Weekley raise the American flag to half mast during a 9-11 Honor and Remembrance ceremony at the Ballard fire station. 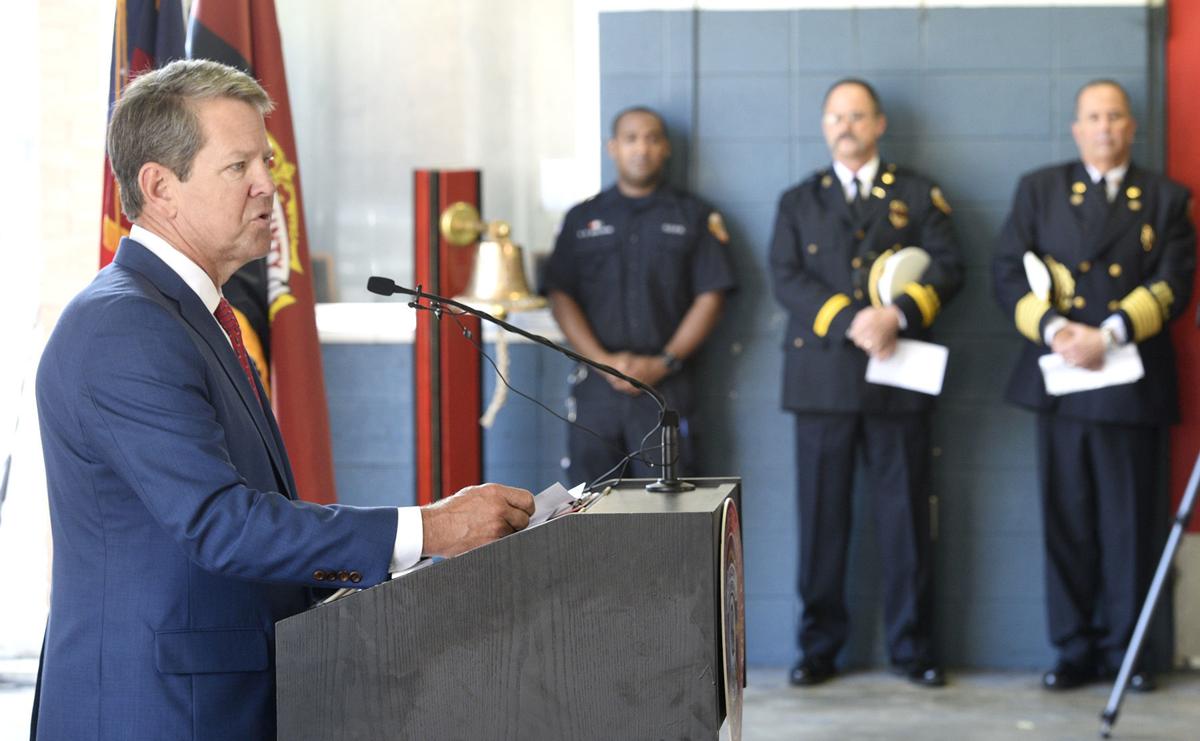 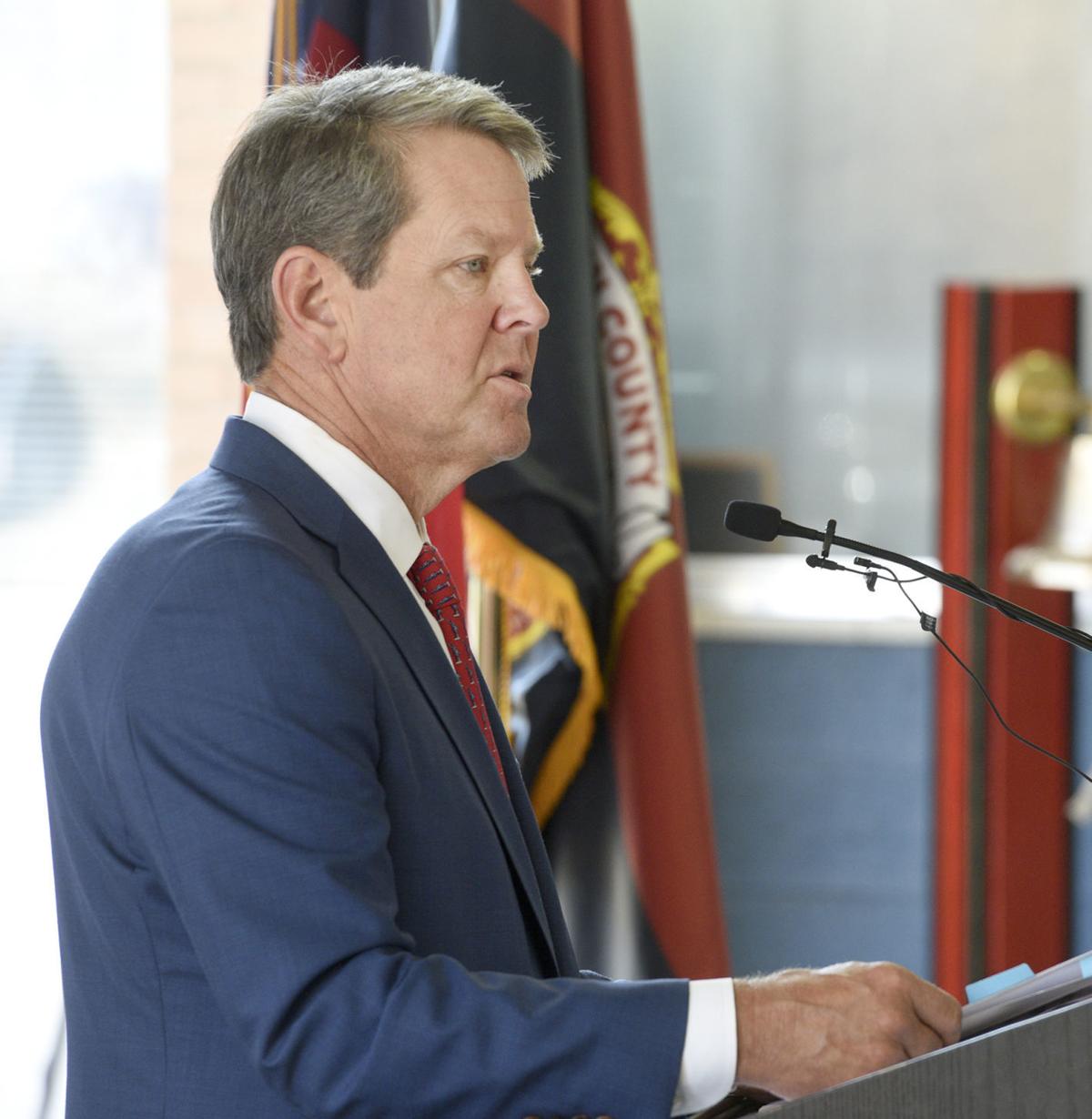 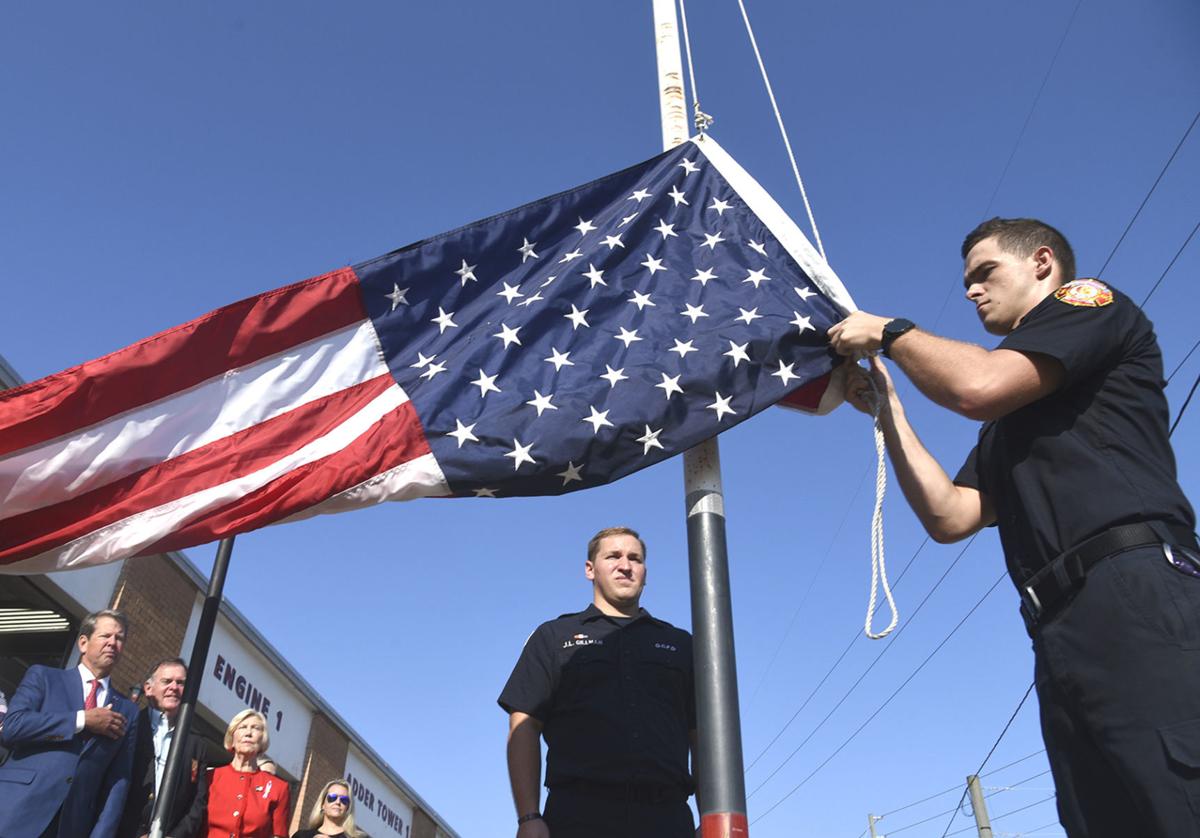 Georgia Governor Brian Kemp shakes hands with firefighters before the 9-11 Honor and Remembrance ceremony at the Ballard Fire Station Wednesday.

Georgia Governor Brian Kemp joins local dignitaries as they watch Glynn County Firefighters Ryan Neff, from left, Joshua Gillman, and Hunter Weekley raise the American flag to half mast during a 9-11 Honor and Remembrance ceremony at the Ballard fire station.

On the night of Sept. 10, 2001, many men and women went to sleep unaware that the next day they’d wake up and leave home for the last time. By the end of the next day, the world had changed.

The terrorist attack on Sept. 11, 2001, took the lives of 2,977 people. Hundreds of those who died were serving their country as first responders, working to save others from harm.

“Those first responders, they were just doing their job, just as you are today,” said Gov. Brian Kemp, addressing a crowd at a 9/11 Remembrance ceremony hosted Wednesday morning at the Glynn County Fire Department Ballard Station in Brunswick. “And they went to bed that night not knowing what the next day would bring. But like you all, they put on that uniform, they went to work and they answered that call.”

That day, Islamic terrorists attacked not only the nation, Kemp said, but a way of life.

“That day changed our country, but it also changed the world forever,” he said. “And for some, unfortunately, this tragedy has faded into the rearview mirror of everyday life. You may not see it in the paper quite as much or on television or even on social media, and sometimes it’s easier to forget something so painful and something so traumatic.”

He implored the ceremony’s attendees, however, never to forget. The ceremony held in Brunswick coincided with events across the nation, all of which aimed to remember those who lost their lives on 9/11.

“Those families will never be able to forget, and those New York fire stations will never forget,” Kemp said. “Those police forces won’t forget. And neither should we.”

The event included a ceremonial striking of the four fives, in which a fire station bell is rung five times, repeated in four series, to honor a first responder who dies in the line of duty.

As the bells rang, fire truck sirens on all sides of the station building began to wail.

“Sept. 11, 2001, was a game changer, as the governor said,” Brunson said. “It will be etched in the memories of Americans for generations to come.”

Just as first responders continue to do their jobs every day, Kemp said, Americans must continue to honor their sacrifice and should never forget that tragic day in 2001.

“We must continue to ensure that our country never, never forgets what so many men and women gave that day, and I pray that we will always honor their sacrifice,” he said. “And I will continue to pray for those families, those loved ones and all the others that were affected.”