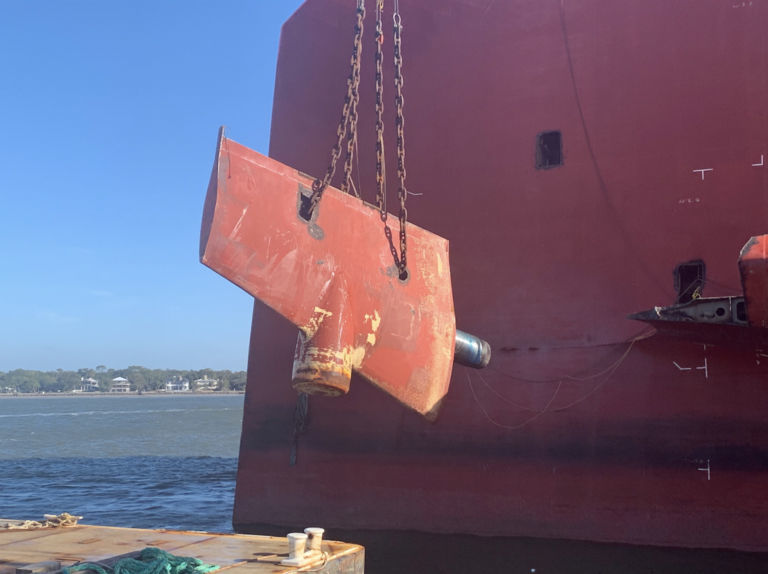 The rudder of the Golden Ray is lowered after being removed from the vessel. 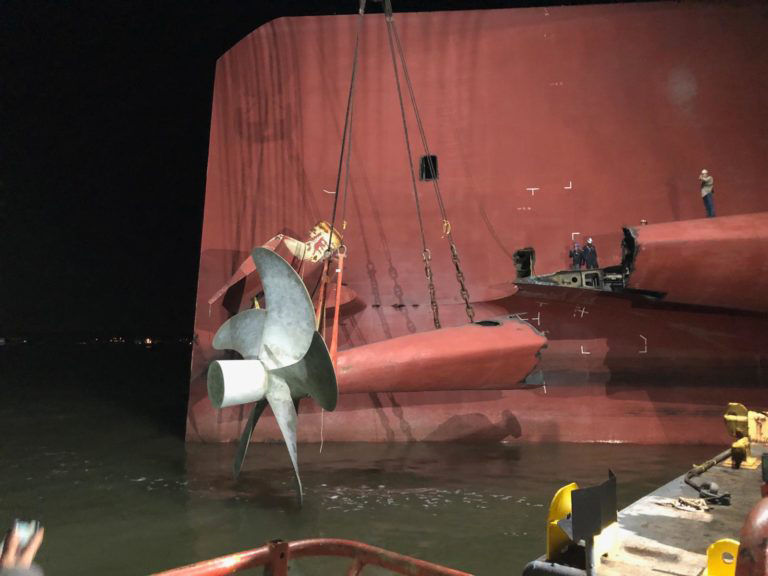 The propeller of the Golden Ray was removed in December. Unified Command announced Tuesday that it had selected T&T Salvage to handle the salvaging of the ship.

The rudder of the Golden Ray is lowered after being removed from the vessel.

The propeller of the Golden Ray was removed in December. Unified Command announced Tuesday that it had selected T&T Salvage to handle the salvaging of the ship.

The shipwrecked Golden Ray’s massive rudder was cut free Friday morning, completing a project to lighten the load on the vessel that has foundered on its port side in the St. Simons Sound for more than three months.

The 2-foot-thick chunk of steel was then hoisted by thick chains onto the deck of an adjacent crane barge, part of a process intended to improve the ship’s stability by relieving its stern of about 130 tons of dead weight, said U.S. Coast Guard Commander Matt Waller of Unified Command. Efforts to remove the Golden Ray’s propeller were successfully completed earlier this week.

Both the rudder and the propeller will be used by the Georgia Department of Natural Resources to create offshore artificial reefs, Waller said.

The project to remove the rudder and propeller began the week of Dec. 9, but has been hampered by lousy weather and the accompanying high winds, Waller said. Unified Command workers used acetylene torches to cut the two pieces out of the ship’s stern. The propeller weighs about 100 tons and the rudder weighs about 30 tons, he said.

“This should relieve some of the stress on the hull,” Waller said.

Resting with its port side in the sandy bottom just south of the federal shipping channel to the Port of Brunswick, the overturned Golden Ray has been subject to the swift currents that accompany the daily tides in and out of the sound. Scouring and erosion of sand around the ship had caused it to list from a 90 degree angle to 100 degree angle. Unified Command responded last month by dropping some 6,000 tons of aggregate rock around its resting place in the sandy bottom.

The removal of the propeller and rudder is expected to further stabilize the ship, Waller said.

Unified Command is still working to finalize its plans to cut the 656-foot-long ship into pieces and remove it entirely from the sound, where it has sat half submerged since capsizing Sept. 8 while heading out to sea with a cargo of 4,200 vehicles. Unified Command, the group tasked with removing the ship and cleaning up any pollution it causes, consists of the Coast Guard, the state DNR and Gallagher Marine Systems.

Unified Command continues to seek bids for the design and construction of an “environmental protection barrier” in which to enclose the shipwreck, he said. The barrier is intended to prevent further pollution from the ship when it is being cut into pieces and removed, he said.

Workers completed the long process of removing some 320,000 gallons of fuel oil from the Golden Ray’s 26 fuel tanks earlier this month.