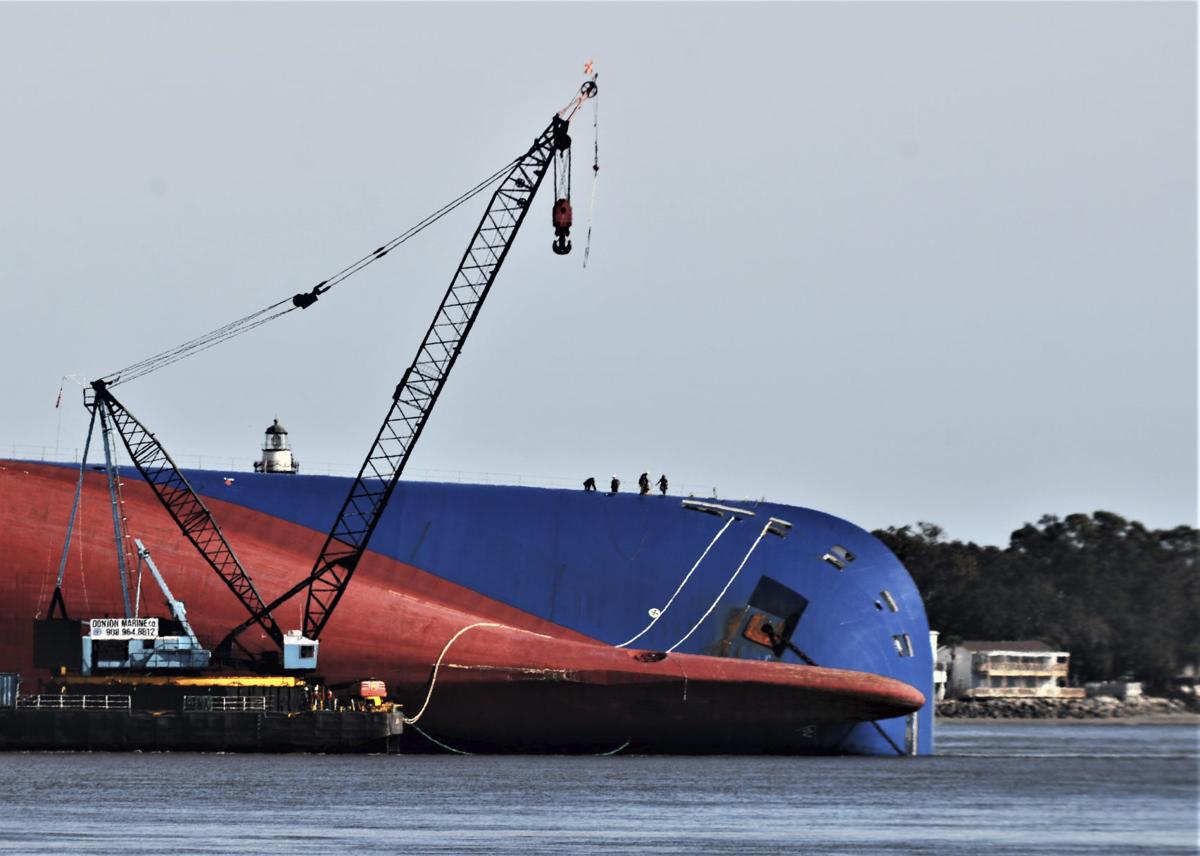 Unified Command continues its work on the Golden Ray on Monday. Later this week, Unified Command will remove the propeller and rudder to try to make the ship lighter and more stable. 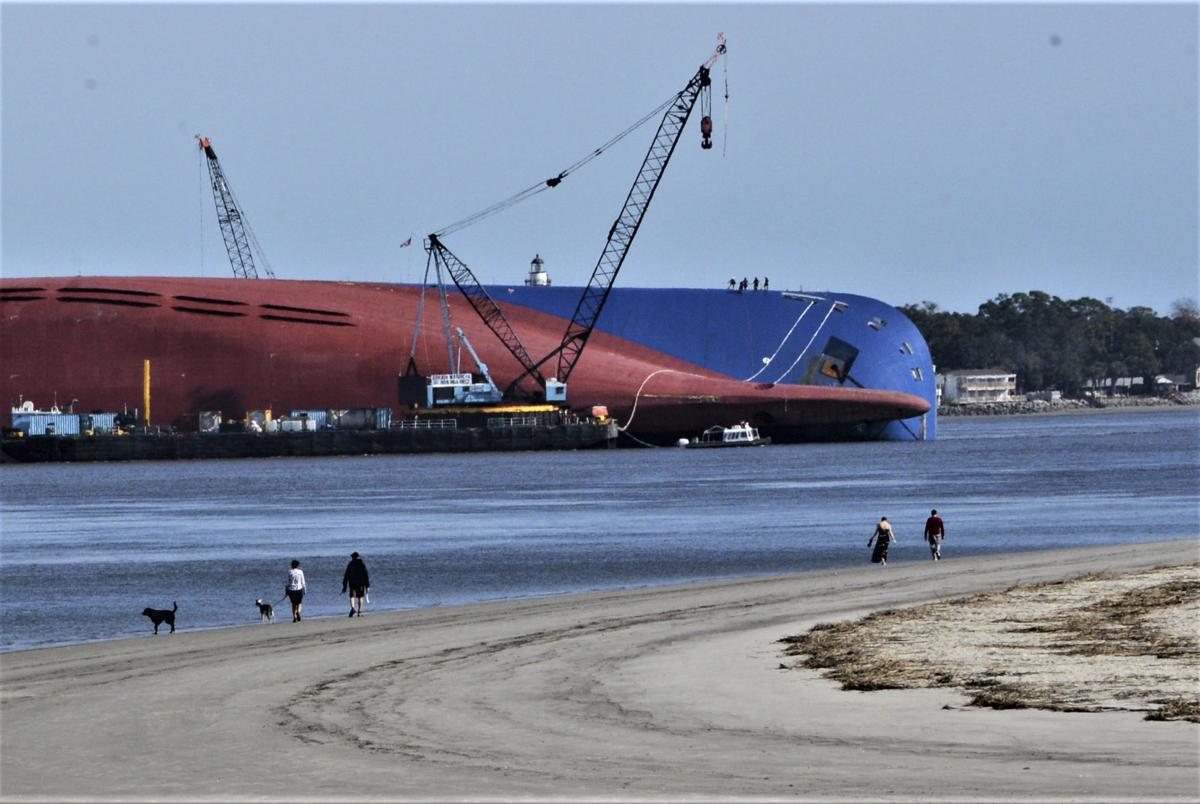 Unified Command continues its work on the Golden Ray on Monday. Later this week, Unified Command will remove the propeller and rudder to try to make the ship lighter and more stable.

The Golden Ray will begin slimming down some this week, but the bulk of the 25,000-ton shipwreck in the St. Simons Sound is still not going anywhere anytime soon, according to Unified Command.

Work crews will instead concentrate on cutting away the rudder and propeller, said Coast Guard Lt. Commander Matt Waller of Unified Command. The process will relieve about 130 tons from the ship’s stern and help to stabilize the 656-foot overturned vessel, which is subject to swift incoming and outgoing tides that rush around it daily in the sound.

The Golden Ray has sat on its port side in the St. Simons Sound since capsizing Sept. 8 while heading out to sea with a cargo of 4,200 Kia and Hyundai vehicles. The Unified Command, which is comprised of the U.S. Coast Guard, the Georgia Department of Natural Resources and the private sector Gallagher Marine Systems, is the group tasked with removing the shipwreck and cleaning up all pollution it has caused. Waller cautioned that this recent action is not the start of the herculean project to dismember and entirely remove the vessel, which sits to the south of the federal shipping channel that serves the Port of Brunswick.

“Sometime this week we’re going to start removing the rudder and the propeller,” Waller said. “It doesn’t mean we’ve started the demolition process yet. It just means we’re trying to get some weight off of there and that will help with some of the stability of the vessel.”

The rudder weighs about 30 tons and the propeller weighs approximately 100 tons, Waller said. Crews will employ acetylene torches to cut the pieces away, he said. A portion of the propeller shaft will be cut away with the propeller, he added.

The crane barges Farrell and Columbia, which are already stationed beside the Golden Ray, will do the heavy lifting once the propeller and rudder are cut free, Waller said. Once under way, the project could be completed in three to five days, he said.

“It’s going to take some weight off the vessel and put less stress on the hull,” Waller said.

For an idea of the Golden Ray’s enormous size, upright on the water the ship’s weight displaces 71,178 tons of water, Waller said.

Meanwhile, Unified Command crews are in the final stages of lightering, the maritime term for the process of pumping oil and gas from the Golden Ray’s fuel tanks. They have drained the eight primary tanks containing the thick bunker fuel and the four tanks containing less-heavy gas and diesel, Waller said.

Further, holes have been cut to allow workers to enter all but one of the bunker fuel tanks and flush out residual oil. Crews are in the process of doing the same on three of the four diesel and gas tanks, Waller said.

There is one bunker fuel tank and one diesel fuel tank that cannot be entered for flushing, he said. The two tanks both lay on the submerged port side and are underwater, he said.

“The bulk of the fuel has been lightered and flushed,” Coast Guard Commander Matt Baer said.

And while the final plans have not been fully established for the ultimate removal of the Golden Ray from the St. Simons Sound, certain aspects of the project are moving forward.

Unified Command continues to seek bids and proposals for the construction of an “environmental protection barrier,” Waller said. The barrier would be intended to protect the surrounding environment during the disassembling process, he said. The barrier structure has previously been referred to as a cofferdam by the U.S. Army Corps of Engineers and in The News. But Baer and Waller said Tuesday that the type of barrier Unified Command is seeking might not fit the definition of a cofferdam. Cofferdams typically consist of a corrugated steel wall constructed inside a body of water. The water within is then pumped to create a dry work environment.

The final barrier around the Golden Ray may not be pumped dry inside, he said. And while such a barrier wall might create a more conducive work environment, its primary purpose would be to protect the surrounding environment once the work of cutting up the Golden Ray begins, he said.

“But we’re definitely looking at some kind of environmental protection barrier,” Waller said. “We’ve got proposals out with some very smart minds, and we’re just going to let them give us their best ideas.”

At some point the ship will be cut up and removed in sections, Unified Command officials said. This will likely involve crane barges stabilized by support posts in the sea floor below. The cranes would likely operate a cable band saw with carbide steel teeth, pulled back and forth by winches, cutting the Golden Ray’s hull and inner structures into sections.

Before that can start, Unified Command would prefer to have a protective barrier around the ship. They are presently reviewing proposals for such a structure.

The 4,200 vehicles on board each contain some gas, oil and other automotive fluids.

“One way or another there’s going to be measures in place to contain any type of release, whether it be debris or fuel oil,” said Kevin Berry, a Senior Manager for Gallagher Marine.