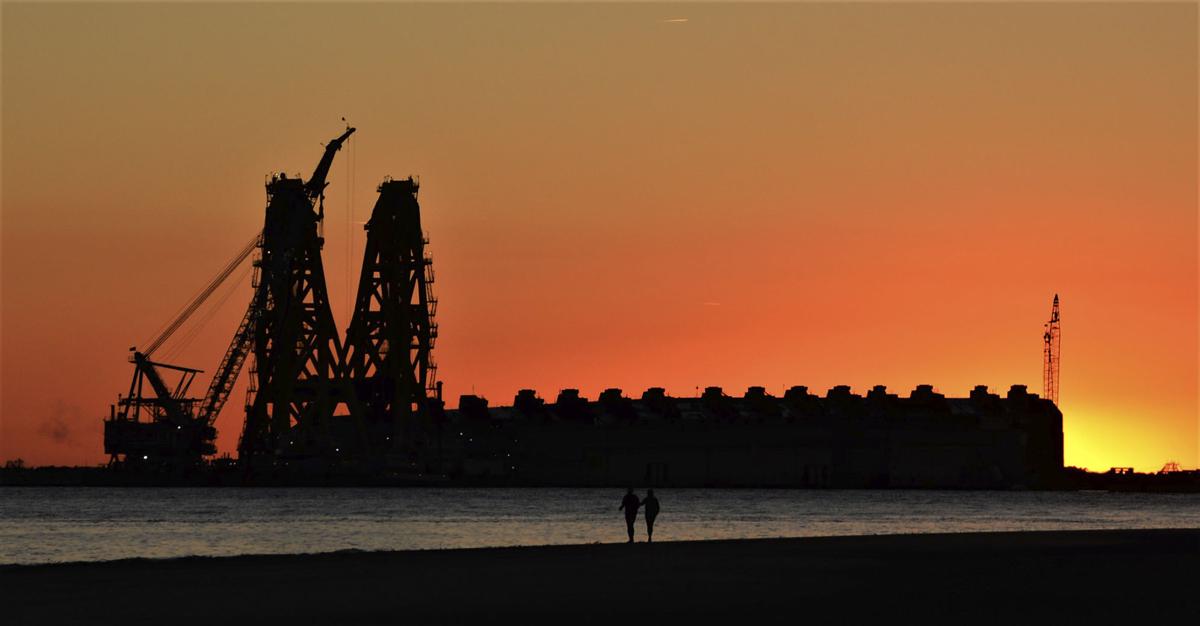 The sun sets as work continues on the Golden Ray. 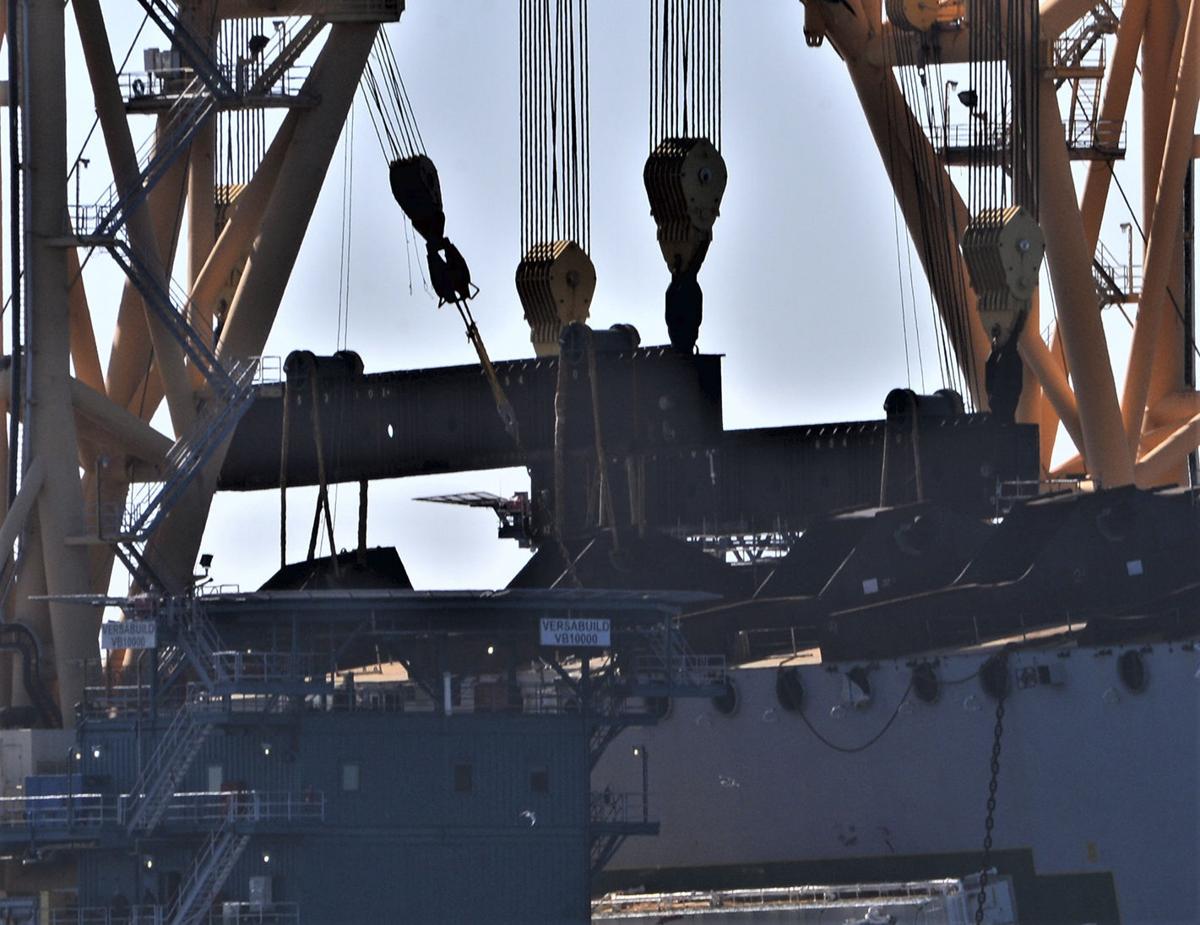 The pulley on the VB 10,000 pulls the cutting chain from the topside of the Golden Ray on Wednesday.

The sun sets as work continues on the Golden Ray.

The pulley on the VB 10,000 pulls the cutting chain from the topside of the Golden Ray on Wednesday.

The cutting of the bow from the shipwrecked Golden Ray may appear to be moving at glacier speed for the untrained eyes along the St. Simons Island waterfront, but progress is picking up, say officials with Unified Command.

Salvage workers on the VB 10,000 crane barge resumed cutting this week with renewed vigor, having performed some fine tuning to the process during the five-day pause prompted by the passing of Tropical Storm Eta, said Coast Guardsman Michael Himes, spokesman for Unified Command.

The 255-foot-high dual-hulled VB 10,000 sits astride the half-sunken overturned shipwreck in the St. Simons Sound. It is employing massive anchor chains powered by pulleys and winches to cut through the overturned ship by force of tension.

Earlier projections estimated 24 hours to complete each of the planned seven cuts. The VB 10,000 began cutting on the bow of the Golden Ray Nov. 6; the chain was halfway there as of Sunday.

Progress has been hampered by broken chain links and unfavorable weather. Numerous other chain links were replaced as they displayed signs of wear and tear during regular inspections.

Officials concede the cutting process is taking much longer than expected.

When cutting resumed around noon Monday, stronger steel chains were cutting into the ship’s hull at what is hoped are more efficient angles, Himes said.

“They have made two modifications,” Himes said. “One is the angle of the cut. They have adjusted the angles to make the cutting cycles more efficient. The other is the grades of steel they’re using in the chain. It’s a higher grade of steel. They are switching them out as they make adjustments in the chain.”

A sign of progress began appearing this week on shorelines around the sound — bits of plastic debris that presumably leaked from inside the ship as the chain continued shearing a steady gash through the shipwreck’s hull and interior spaces. One piece, in particular, very likely came from one of the 4,200 vehicles that were in the ship’s cargo hold when the Golden Ray capsized on its port side between St. Simons and Jekyll islands while heading out to sea Sept. 8, 2019.

“We did recover small plastic debris,” Himes said. “As an example, one of these plastic pieces looked like a license plate holder.”

Folks who find debris on local shores or waters can report it at 912-944-5620. Specifics about where the debris was spotted is vital, Himes said.

The salvaging operation includes a multi-layered approach to detecting and addressing the anticipated releases of oil, debris or other pollutants during the salvaging operation. First is the 1-mile perimeter environmental protection barrier that surrounds the shipwreck. The complex structure’s sturdy mesh netting with 5-foot-square gaps is intended to catch vehicles and other large debris shaken loose during the cutting and lifting process. Floating booms lining the surface of the barrier are intended to prevent and slow the spread of oil leaking from the ship.

Additionally, large surface oil skimming machines known as current busters are placed at the east and west ends of the barrier at locations that best line up with the sound’s ingoing and outgoing tides. A flotilla of pollution prevention vessels remain on the water daily, lining up with the currents to monitor and address both debris and oil discharges. These include oil-skimmer boats and vessels crewed by debris recovery teams, Himes said.

Some 25,000 feet of oil spill prevention boom also has been placed around environmentally sensitive areas in the sound.

The sleek trawlers Master Tyler and Poncho can be seen daily, patrolling the sound for signs of large debris that might escape the environmental protection barrier. The trawler’s patented 80-foot Gorilla Nets are capable of hauling up tons of debris.

Helicopters fly above the floating work site, acting as pollution spotters and relaying information to all below.

“This is all very choreographed,” Himes said. “It’s easy to see all the assets out there.”

The shipwreck of the 656-foot-long Golden Ray has put the St. Simons Sound on the Georgia Water Coalition’s Dirty Dozen list for 2020, a yearly report that “highlights the politics, policies and issues” that endanger the state’s natural waters.

The St. Simons Sound was listed No. 12 on the Dirty Dozen, noting that “the public/private command overseeing the salvage ... has chosen a method that almost assures the release of oil and other pollutants into the sound.”

Unified Command consists of the Coast Guard, the Georgia Department of Natural Resources and Gallagher Marine Systems. It is charged with ensuring the salvage operation adheres to environmental protection guidelines set forth by the federal Oil Pollution Act of 1990.