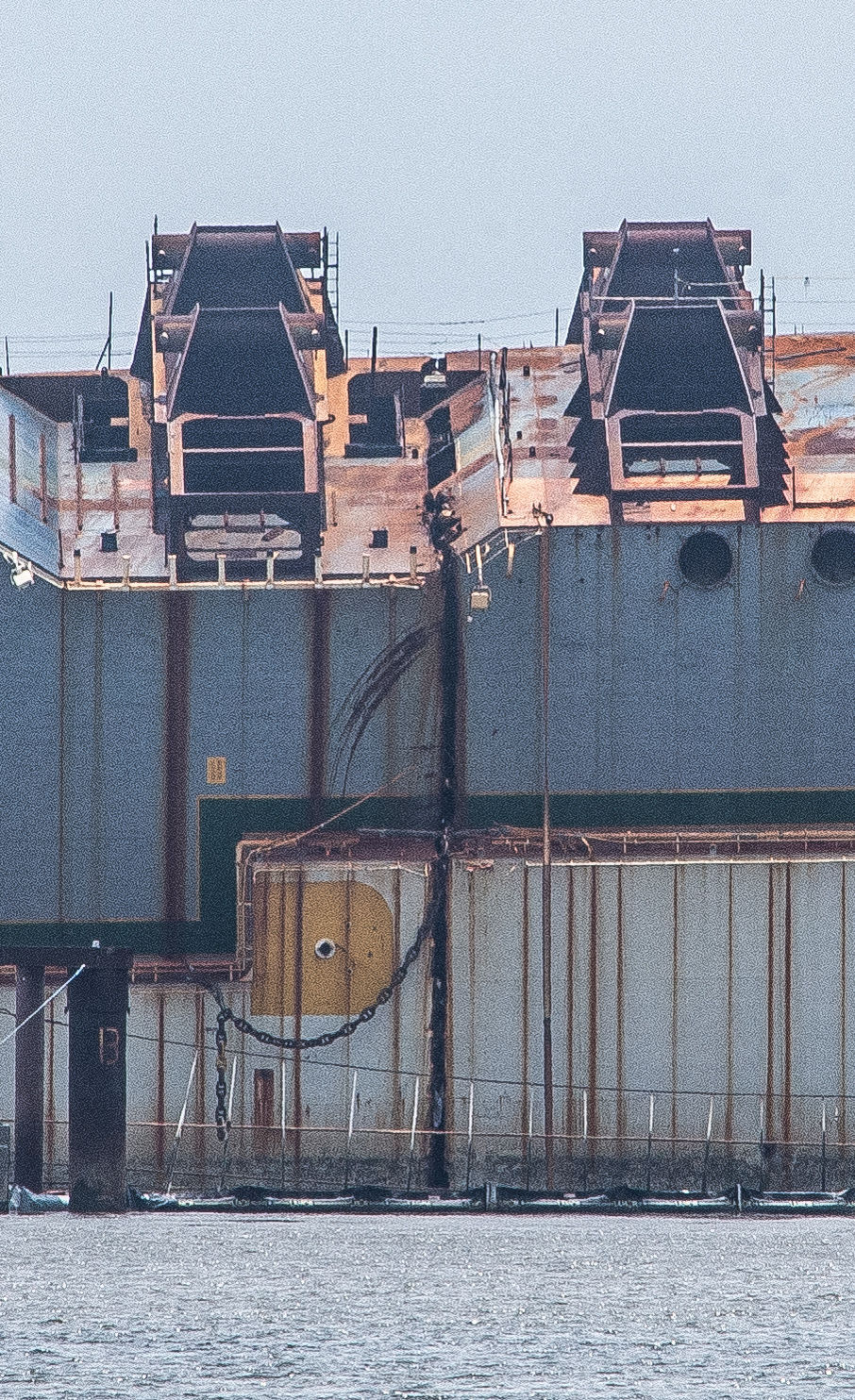 Salvors are six weeks into this fifth cut on the half-submerged shipwreck, a process that has been hampered by dense steel encountered in the bulkheads of the huge chunk of steel known as Section 3, Himes said. The effort was also interrupted on the afternoon of May 14 when a welder’s torch ignited an inferno fueled by hundreds of vehicles in the cargo hold.

Tugboats pouring seawater into the shipwreck extinguished the fire late that night, but cutting did not resume until May 27. The VB 10,000’s system of winches, rigging and pulleys powers the massive cutting chain, tearing its way up through the shipwreck by force of tension.

Throughout this cut, however, salvors have alternated between the cutting chain and more precise cuts by torch-wielding rope access technicians (RATs). The RATs hang suspended by ropes to conduct slight alterations in the cutting path to avoid thick steel reinforced areas that can cause wear and tear on the cutting chain — actually an anchor chain of which each link is 18 inches long, 3 inches around and weighs 80 pounds.

“Right now, the VB 10,000 moved off the wreck to lower the cutting blocks for some maintenance which involves positioning a work barge in between the VB (10,000) pontoons,” Himes said. “Once that work is done, they’ll shift back and resume chain cycling. The cutting blocks are under tension for long periods of time to facilitate the required upward force to make the cutting chain work.”

The 656-foot-long Golden Ray overturned between Jekyll and St. Simons islands on Sept. 8, 2019, while heading out to sea with a cargo of 4,200 vehicles. Cutting to remove the shipwreck from the sound in eight sections began in November. With four sections now removed, about 300 feet of the shipwreck remains in the sound.

The VB 10,000 hoists each section from the sound and places it on a barge. The first four sections all have been transported via barge to Modern American Recycling Services (MARS) in Gibson, La.

Salvors are more than 75 percent of the way through the Section 3 cut.

“But it’s very tedious and slow cutting through that bulkhead,” Himes said. “We are sometimes measuring progress in links at a time.”