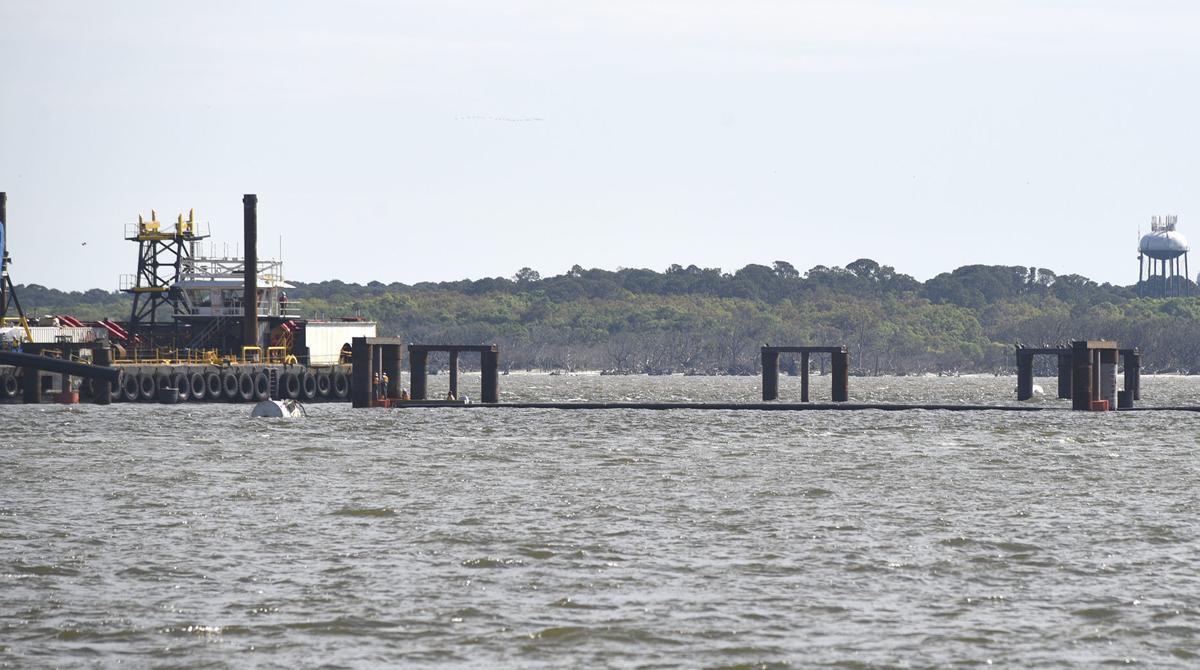 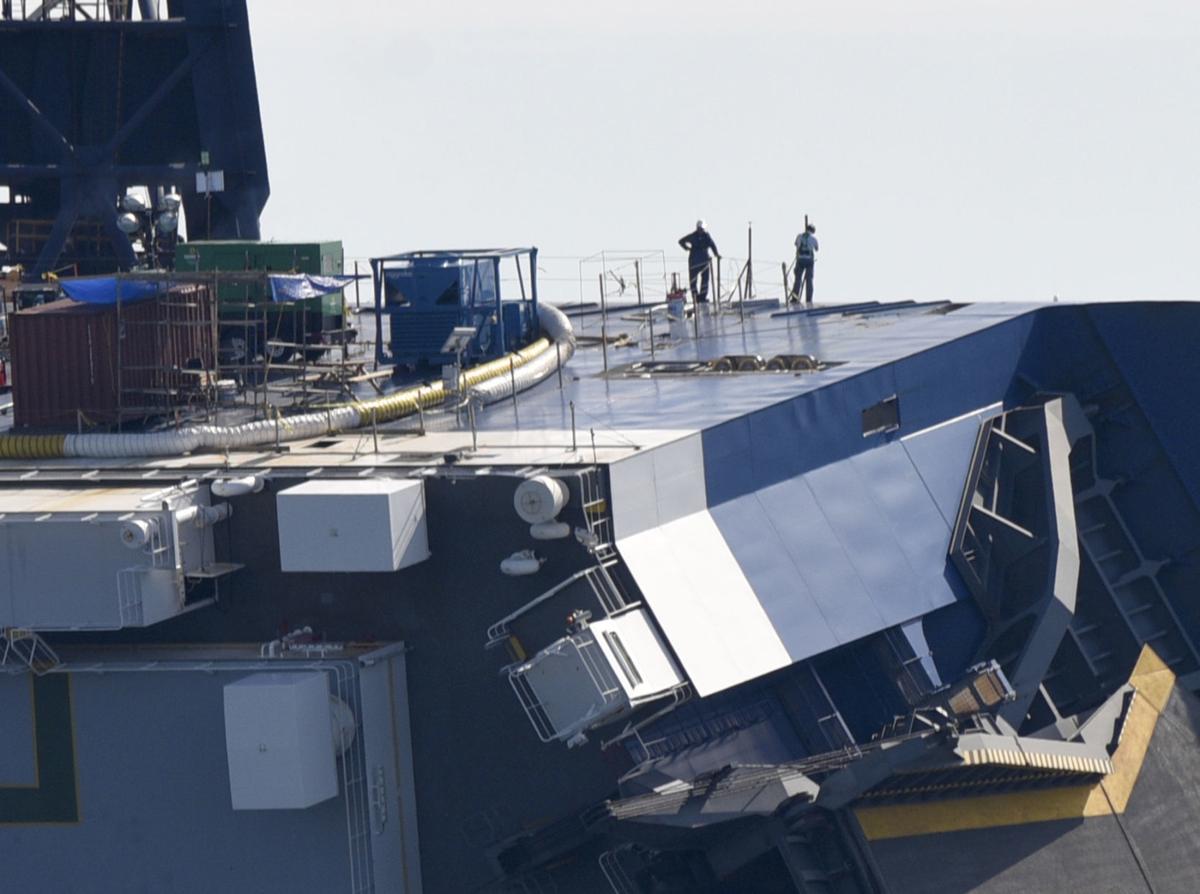 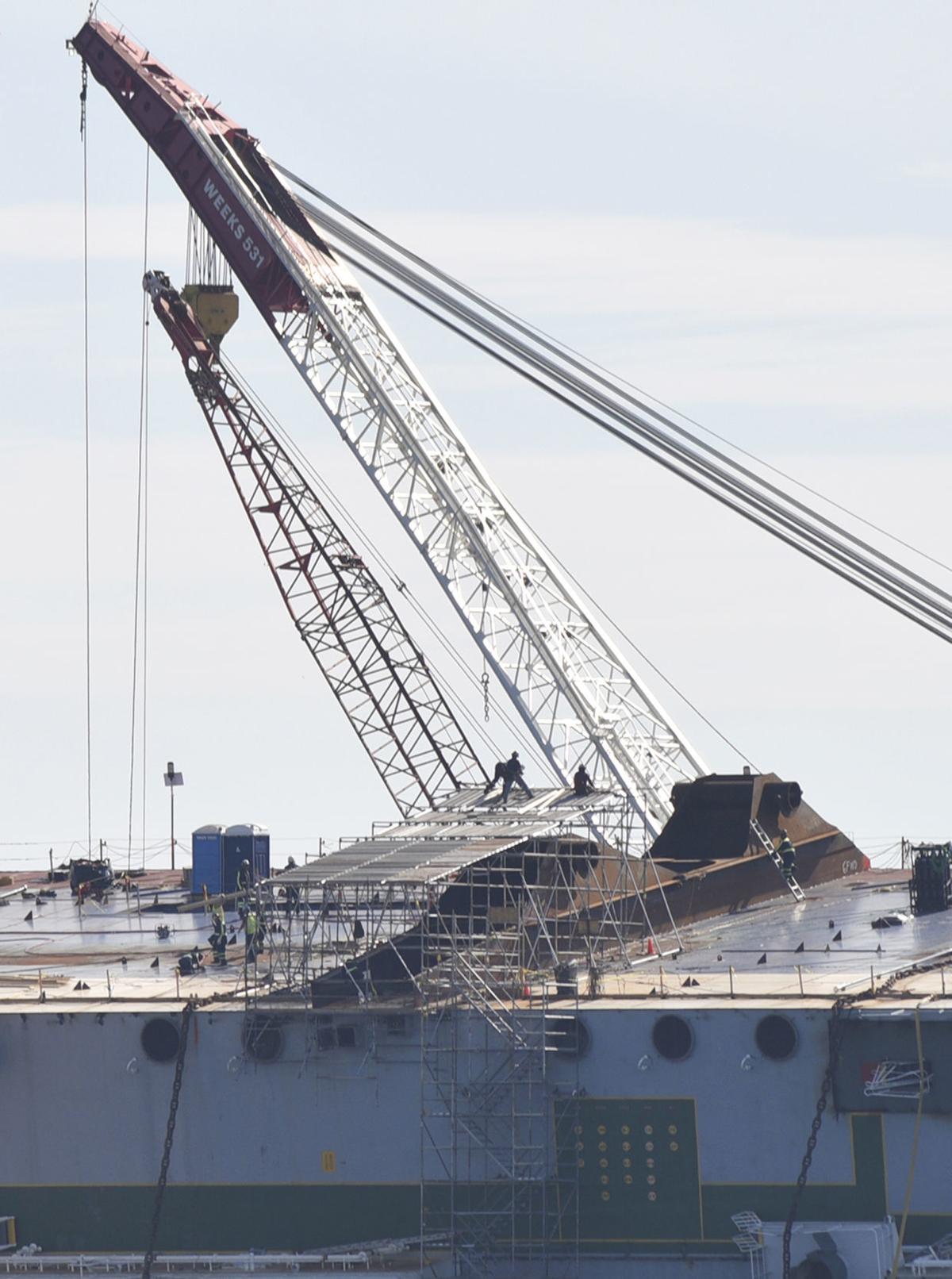 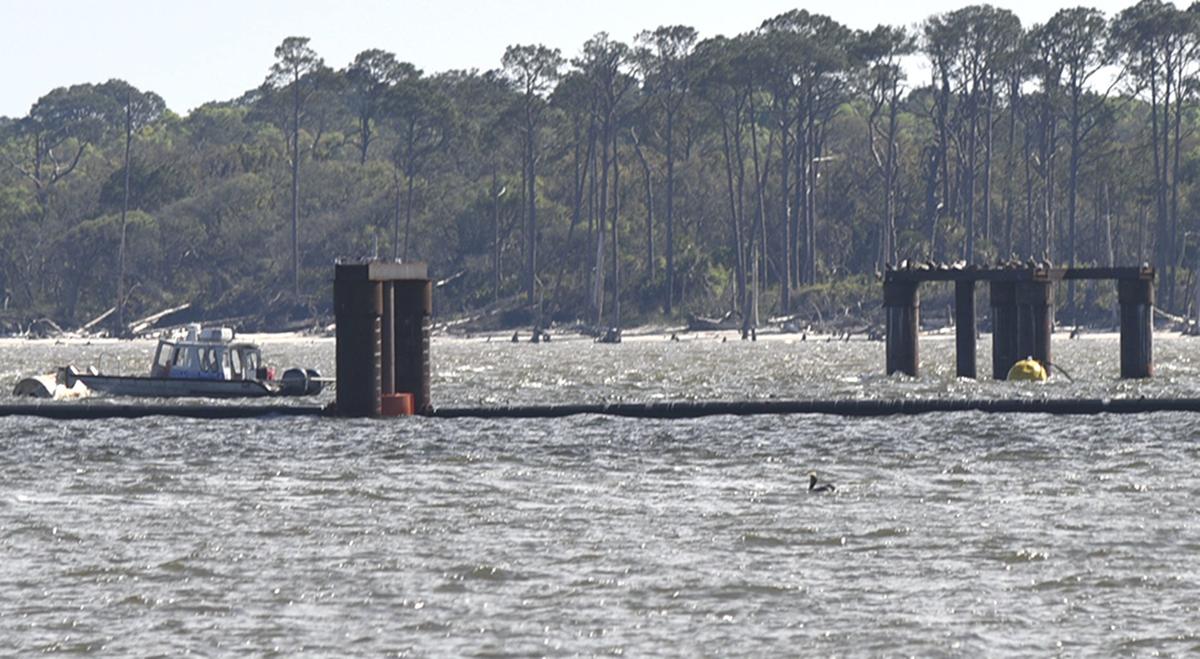 Some six weeks into its construction, the expansive environmental protection barrier that will surround the shipwrecked Golden Ray is beginning to look like … something.

Most of the 80 support piles for the 33-acre mesh netting barrier are in place, Unified Command officials said Wednesday. And last weekend, the Weeks Marine construction company began installing a system of sturdy polymer horizontal pipes that will connect the whole thing together and hold the surface pollution containment booms in place.

And, yes, the shipwreck ordeal that has stretched for nearly seven months is getting still more complex and technical. In the process, the hulking 25,000-ton Golden Ray has gradually become more of a background image to the industry of towering cranes, barges, work platforms and small assorted tugs and workboats that has cropped up on the water around it.

If all goes as planned, the entire environmental protection barrier could be completed by the end of the month, said Coast Guardswoman Monika Spies, spokeswoman for Unifed Command. That would set the stage for what is hoped will be the final stage in this enduring Golden Isles drama – the cutting into eight pieces and the removal of the ship and its cargo of 4,200 vehicles.

Here is what is shaping up:

The 140-foot-long steel piles are being placed in pairs, driven roughly half their length into the sound’s sandy bottom. Each pair of piles is being secured by a large support bracket that spans from the top of each. A steel buoy is attached to the center of the bracket span, hanging down into the water.

This is where the horizontal pipes come in. The 36-inch in diameter HDPE polyethylene pipes are foam filled and float. Each is 148 feet long. The pipes will be connected to the floating steel buoys at the center of each pile pairing, giving them the ability to rise and dip with the extreme tide differentials within the sound. Attached to the open water side of the pipes will be the pollution booms, Spies said. The booms are actually weighted vinyl skirts that dip a few feet below the water to block the flow of fuels and other pollutants. They are intended to prevent the outside spread of pollutants, particularly gas and automotive fluids from the 4,200 vehicles inside the Golden Ray’s cargo hold.

The booms are similar to the ones employed last fall around environmentally sensitive Bird Island and other places during oil spills from the ship, Monkia sail. But these booms are much bigger, she said.

“It’s referred to as an offshore boom. It’s just a bigger type of oil containment boom. It will be better able to handle the swift currents in the area of the shipwreck.

Weeks Marines had installed 10 of the 26 floating pipes as of Friday. The company has installed 68 piles with a dozen more to go, according to Unified Command. Unified Command consists of the U.S. Coast Guard, the Georgia Department of Natural Resources and Gallagher Marine Systems. It’s responsible for overseeing the cleanup of the shipwreck and the prevention and mitigation of resulting pollution, as outlined by the federal Pollution Act of 1990.

The Golden Ray was headed out to sea with its cargo when it capsized in the St. Simons Sound in the dark morning hours of Sept. 8. Over the remaining months of 2019, work crews pumped some 330,000 gallons of the estimated 380,000 gallons of fuel that were in the Golden Ray’s tanks.

The surface booms that will line the surface of the protective barrier are intended to catch most of the leaking pollutants that escape during the cutting process this summer, Unified Command said. Crews aboard oil skimming boats will be stationed inside the gated environmental protection barrier throughout the cutting process. Skimmer boat crews also will be stationed on the perimeter to catch any oil that breaches the boom and protection barrier.

Still to be completed on the barrier is the double-layered mesh netting, which will stretch from surface to sandy bottom. The netting is intended to catch vehicles and debris that might shake loose during the cutting process, preventing such pollution from escaping into the St. Simons Sound at large. The surface to sound bottom netting will be attached in panels that stretch from one piling pair to the next.

Once Weeks Marine completes the environmental protection barrier, the cutting and removal of the shipwreck is expected to begin in short order. Primary contractor T&T Salvage will handle this daunting task, employing the formidable VB 10,000 crane barge.

The dual-hulled VB 10,000 has an arching crane structure that stands at 248 feet high. That is taller than the 185-foot roadway level of the Sidney Lanier Bridge that spans the nearby Brunswick River.

The VB 10,000 is based in the Gulf of Mexico and will take about 10 days under tow to reach out waters. The VB 10,000 will use a giant chain saw to cut through the hull, from bottom the up. Each of the seven planned cuts will take up to 24 hours, and the cutting cannot stop until completion once it commences.

Each of the eight slices of the ship will then be hoisted by the VB 10,000 onto an awaiting specially designed barge, which will have high walls around the deck to keep pollution from spilling back into the water.

Unified Command’s goal is to have the bulk of the ship removed prior to the onset of peak hurricane season, which typically begins in August and runs through October. The environmental protection barrier will not be dismantled until all remaining debris inside is removed. Divers, underwater video and sensor devices will be employed to locate the debris.