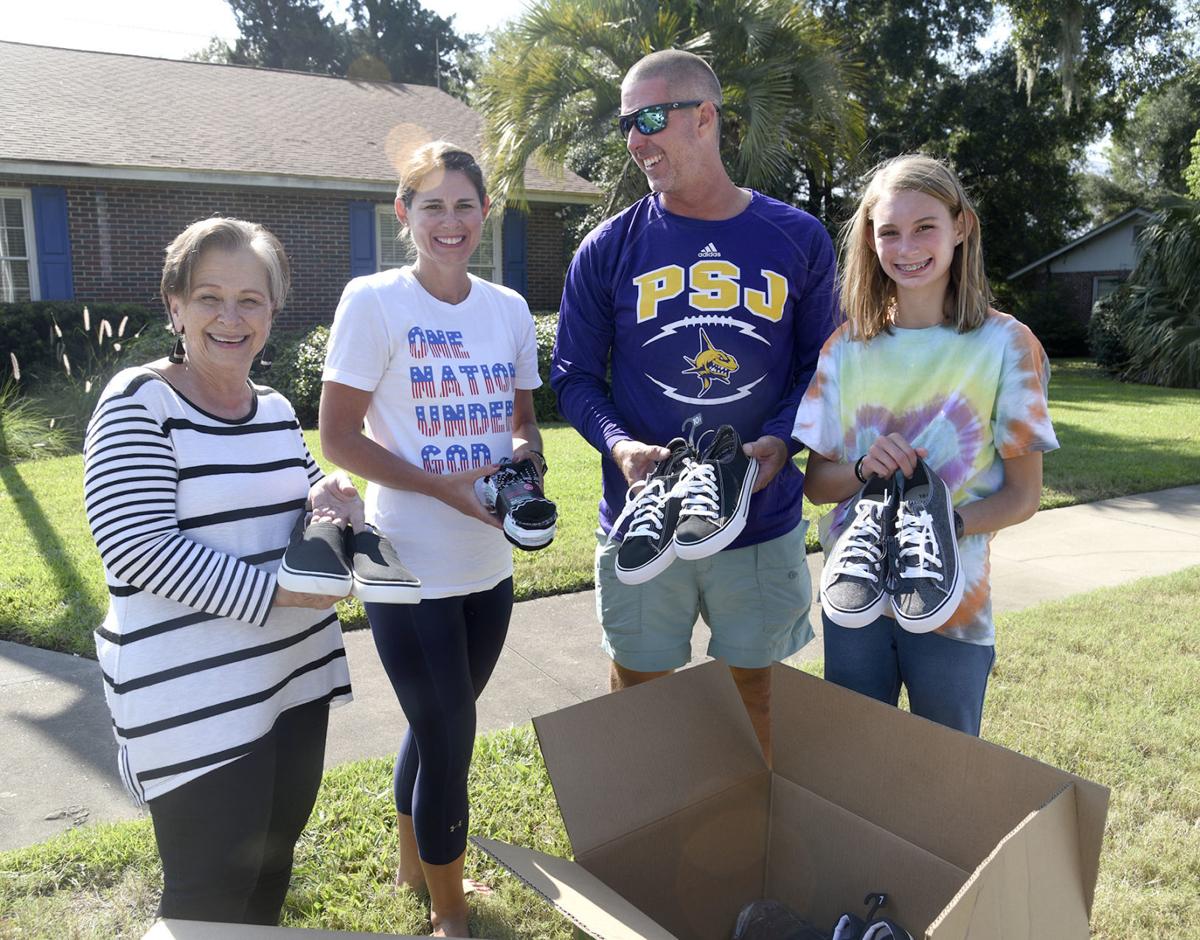 International Seafarers’ Center Executive Director Vicki West, left, accepts a donation of over 40 pairs of new shoes from 12 year-old Riley Letson, right, through her non-profit organization Soles4Souls. The shoes were given for the crew of the capsized car carrier ship Golden Ray. helping Riley unload the shoes are her parents, Brandon and Kim. 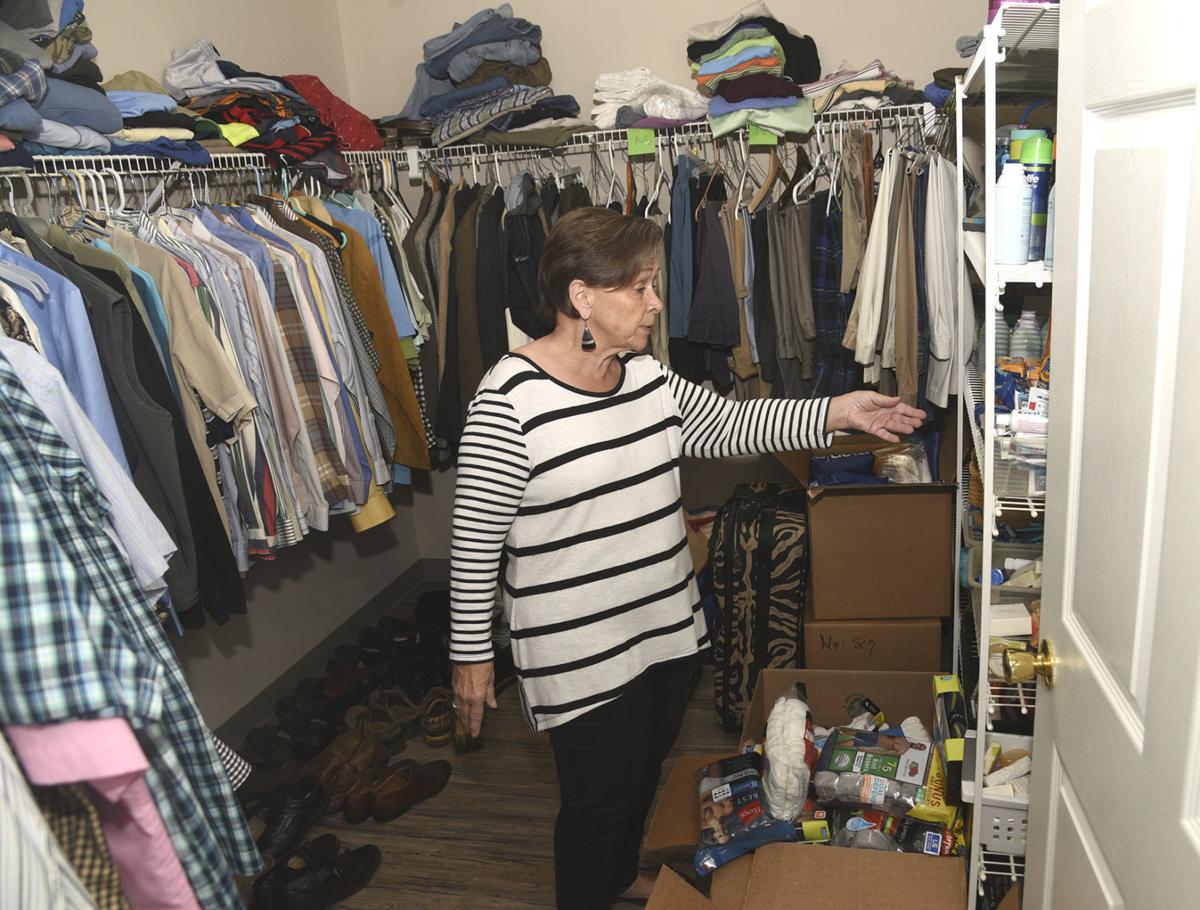 International Seafarers’ Center Executive Director Vicki West looks over the many donations that have poured into the center in the wake of the capsizing of the car carrier Golden Ray.

International Seafarers’ Center Executive Director Vicki West, left, accepts a donation of over 40 pairs of new shoes from 12 year-old Riley Letson, right, through her non-profit organization Soles4Souls. The shoes were given for the crew of the capsized car carrier ship Golden Ray. helping Riley unload the shoes are her parents, Brandon and Kim.

International Seafarers’ Center Executive Director Vicki West looks over the many donations that have poured into the center in the wake of the capsizing of the car carrier Golden Ray.

For all Vicki West knew Wednesday morning, a certain 30-something Filipino merchant mariner was still walking around a local motel lobby in Santa Claus pajama bottoms.

The man picked them out of the closet at the International Seafarers’ Center in Brunswick moments after arriving there Sunday afternoon. He was among 18 crew members who were rescued from the shipwrecked freighter Golden Ray, which rolled over in the St. Simons Sound way before dawn Sunday morning.

They walked into the center with the clothes on their backs after being rescued from the ship by Coast Guard search and rescue crews, said West, director of the Seafarers’ Center. The selection in the center’s clothing closet was adequate at best, but at least one crewman struck gold with that festive sleepwear item.

The Golden Isles community has since answered the stranded crew’s plight with an overwhelmingly generous outpouring of donations. But that one Filipino guy, he’s not about to part with his prized pajama bottoms.

The Seafarers Center has been a whirlwind of activity since those crew members from the Golden Ray first straggled through its doors. Two other crewmen were taken from the boat by a Coast Guard helicopter that morning and transported to a local hospital for treatment. Four South Korean crewmen remained trapped onboard the 656-foot Golden Ray until Monday afternoon, when Coast Guardsmen cut a hole in the ship’s hull to reach them.

The entire crew have since been put up in a motel in Glynn County, where they were being questioned by Coast Guard investigators and awaiting the necessary paperwork to return to their home country.

But although they are not able get out and see the community, there should be little doubt in the minds of these merchant mariners as to how folks in the Golden Isles regard them. Food, clothing, socks, shoes, gift cards and much more have been streaming to the Seafarers Center, which is acting as a liaison of sorts between the crew members and the community, West said.

“They are well taken care of,” West said, tearing up with emotion. “I just want to put out a big thank you to all of this community. It’s amazing the way you all have come through.”

International Seafarers’ is a Christian-based nonprofit organization that acts as welcome center for the thousands of mariners who arrive at the Port of Brunswick each year from throughout the world. The center on Newcastle Street offers international visitors a small chapel, a lounge area with a pool table, some groceries, a selection of books and free internet, among other things. Volunteers with Seafarers’ International also offer the visitors transportation for shopping excursions and more. In addition to the center in Brunswick, there is a larger International Seafarers’ facility on Colonel’s Island inside the port.

It has been a challenge to respond to the needs of these merchant mariners who were left stranded in a foreign land in the wake of the Golden Ray disaster, West concedes. The Golden Ray was heading out to sea after loading up with vehicles at the Port of Brunswick when it began “listing heavily” while executing a right turn in the channel. The ship rolled over completely on its left side sometime after 1:30 a.m.

Heavy smoke and flames were showing on the exposed right side of the ship when Coast Guard crews responded to a 2 a.m. distress call. Coast Guard officials managed to get 20 of 24 crewmen off before conditions worsened to the point the it was unsafe to continue to rescue operations.

The four who remained trapped on board would have to wait until Monday afternoon to be plucked from a hole cut in the ship’s hull. The Port of Brunswick is closed until further notice and plans are being made to remove the behemoth 25,000-ton ship from the Sound. Pollution mitigation and prevention plans also are taking shape.

Back to Sunday afternoon, it was a forlorn bunch who arrived at the Seafarers’ Center. Two arrived after being treated at the local hospital — a Filipino man for a fractured ankle and the South Korean woman for two broken fingers, West said.

Volunteers were waiting to greet them.

“When they first got to the center, you could tell that these guys were a little traumatized,” volunteer Stephen Barron said. “Some had ripped clothing. The first thing we did was welcome them, tell them what we had to offer, and we prayed with them. After a while, they were in great spirits.”

Of course, the South Koreans were worried sick about their countrymen stuck inside the ship, West said. “You could tell they were very upset,” she said.

The Filipino crewman wanted to take mass. Father Tim McKeown at nearby St. Xavier Catholic Church agreed to meet them for a special afternoon mass. Barron drove some of the guys over.

“For me, it’s about helping my fellow brothers from another country,” said Barron, a St. Simons Island resident. “It’s kind of like one hand helping another, you know? I got a lot gratification based on just the smiles we get from them just for helping them out.”

The offers for help began arriving quickly, West said. Meals have been brought in from Grandy’s restaurant and Southern Soul, with Zachary’s River House, the Wee Pub on Jekyll Island and Toucan’s Ale House waiting in the wings to keep the merchant mariners well fed during their stay here.

Other donations have rolled in, including socks, sneakers, underwear, ball caps — “They love ball caps,” West said — and gift cards galore. One contingent brought in $600 worth of clothing from Old Navy and left so fast West did not get the group’s name, she said.

“It has been incredible,” West said. “We have people upon people coming here. We were the busiest place in Glynn County. We had to be. So many people were here, they couldn’t have been anywhere else.”

Meanwhile, the shipping channel to the Port of Brunswick remains closed. Six ships, five “Ro Ro” vehicle transporters and a freighter from Trinidad here to load up on chicken feed, remain waiting offshore.

The Emerald Ace, a car carrier ship was allowed to leave port Wednesday afternoon as a test run of sorts to see how shipping traffic would be affected when passing the shipwrecked Golden Ray, said Coast Guard Lt. Kit Pace.

The channel may reopen on a limited basis as early as Thursday, said Norm Witt, Captain of Port for Brunswick and Savannah and also a Coast Guard Commander. Coast Guard Brunswick Commander Justin Irwin took Witt on a boat tour of the channel late Wednesday afternoon to ascertain its condition, Irwin said.

And when shipping resumes at the Port of Brunswick, the folks at International Seafarers’ Center will be there to welcome the arriving merchant mariners. They are fresh out of Santa Claus pajama bottoms. But otherwise, they are ready with arms wide open.

“That is what we’re here for,” West said. “This is the first day we’ve been able to take a breath since Sunday. Right now, we’re exhausted. But we’re happily exhausted.”