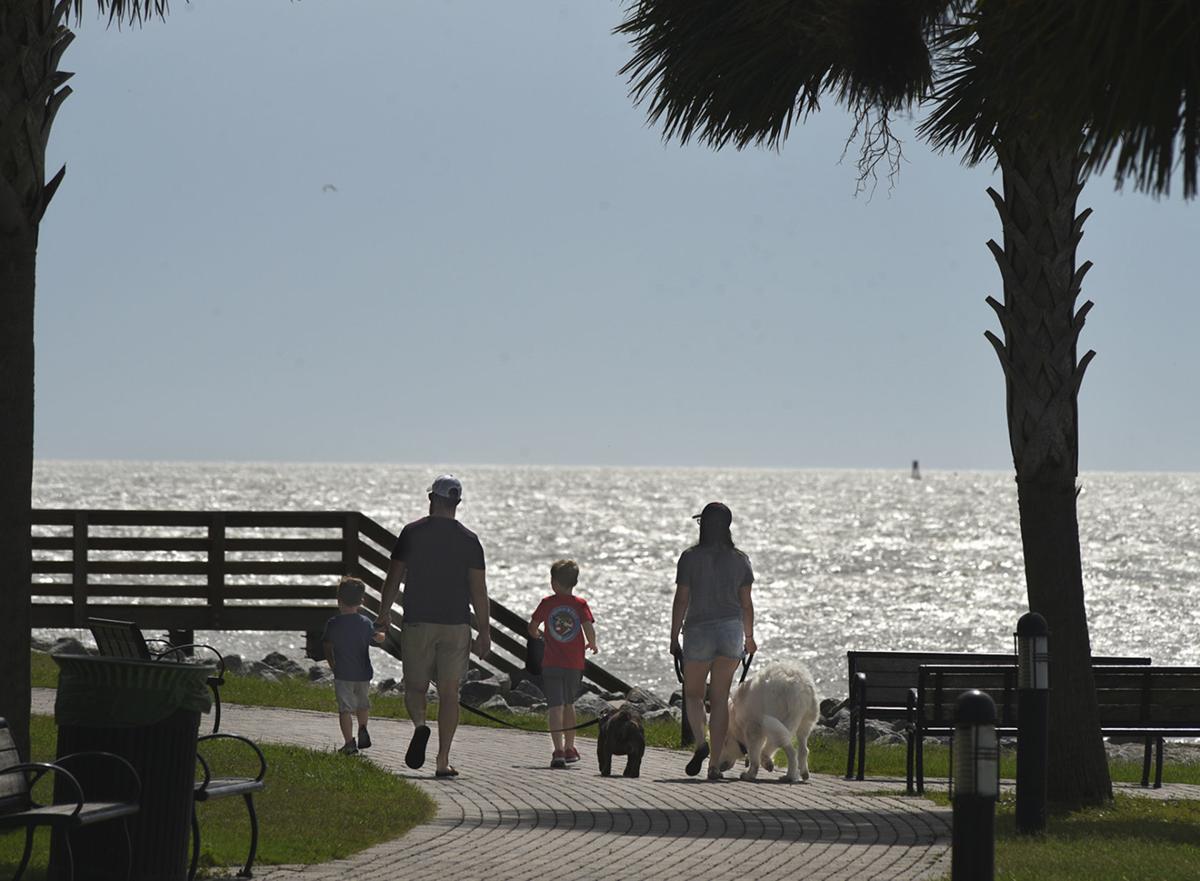 A family enjoys a stroll at Neptune Park on St. Simons Thursday morning. 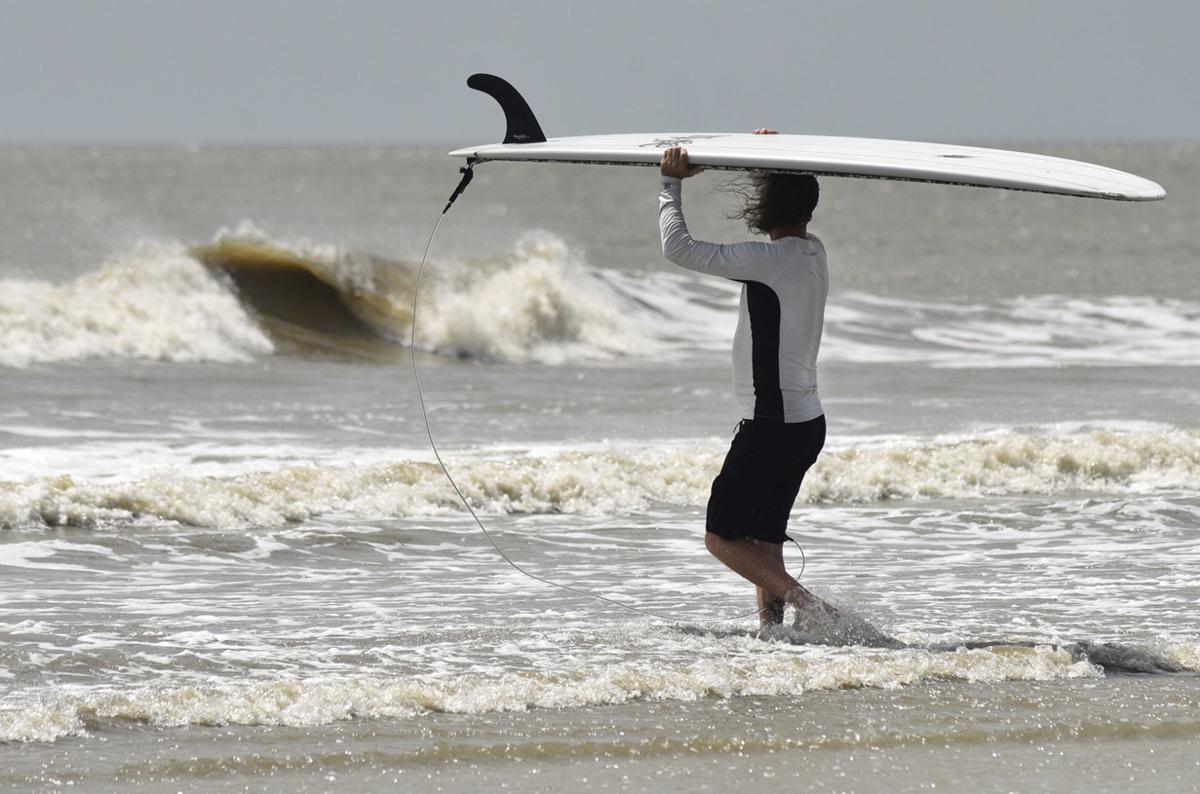 A surfer, above, heads out to catch the waves at the Gould’s Inlet beach on St. Simons Island on Thursday morning. 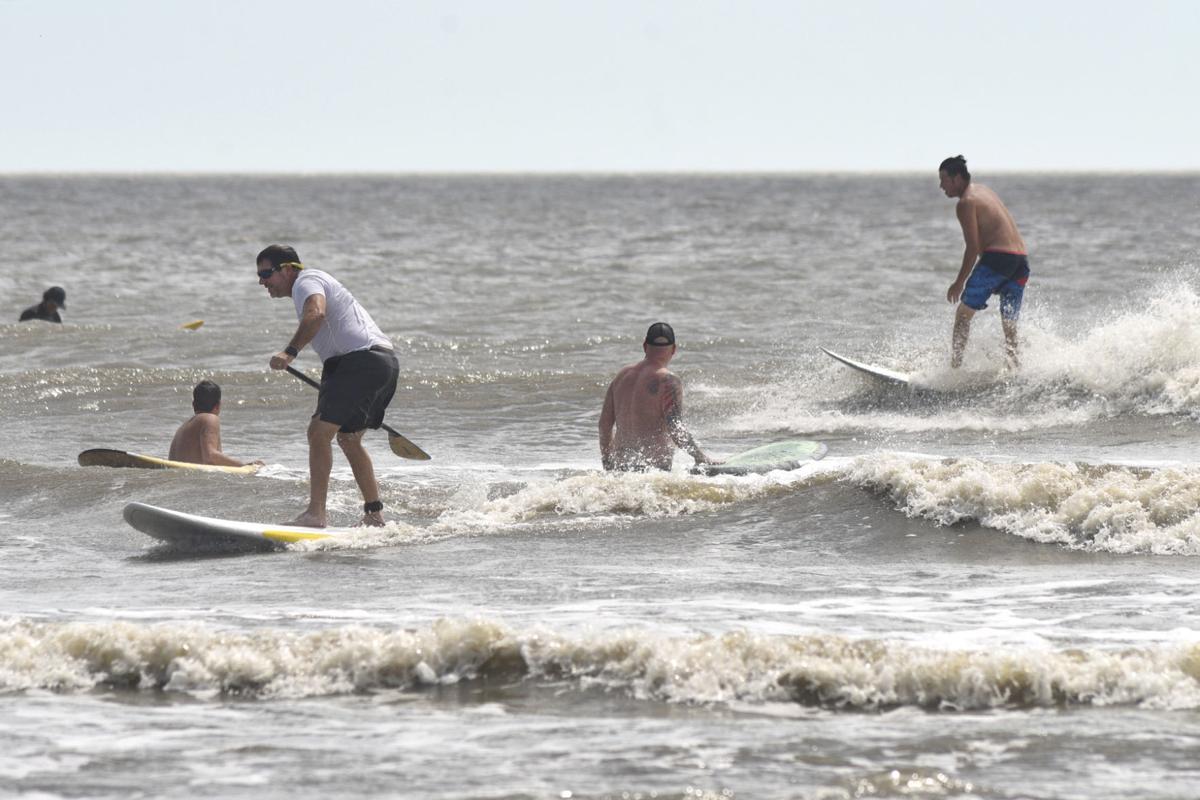 Surfers and paddleboarders take advantage of the post-hurricane surf at Gould’s Inlet beach on St. Simons. 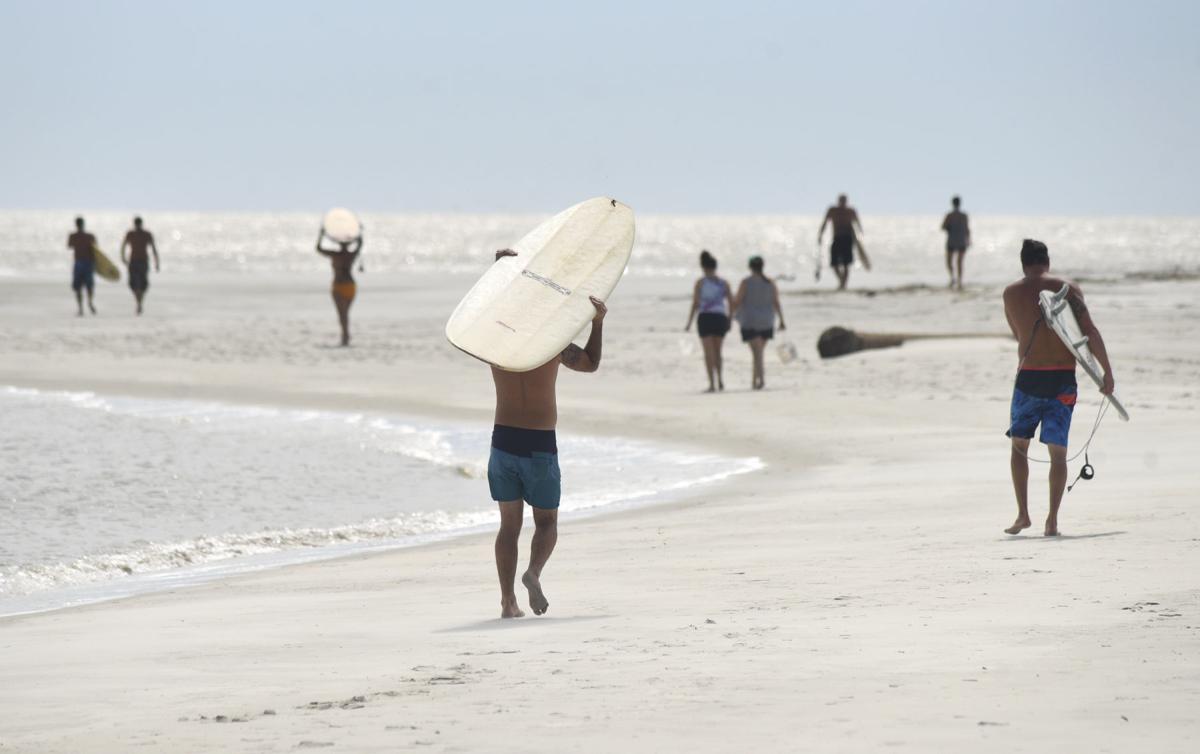 Surfers make their way down the beach at Gould’s Inlet on St. Simons on Thursday. 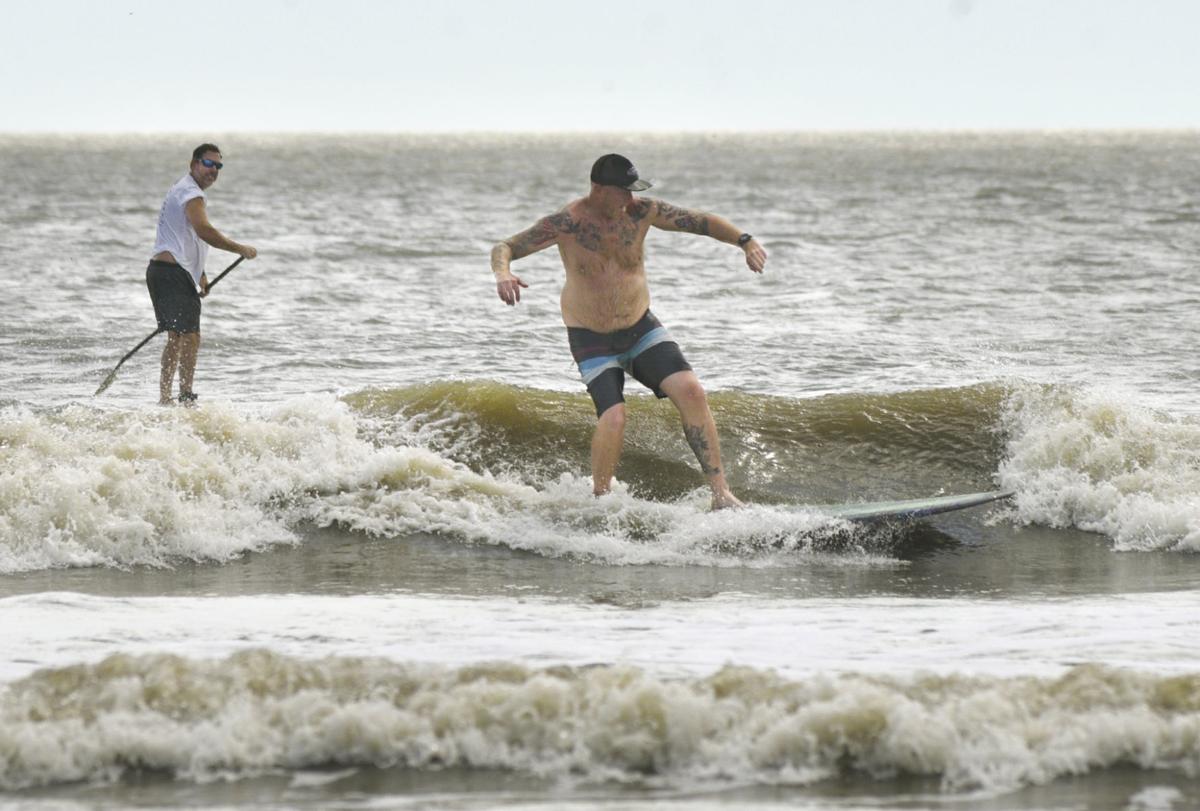 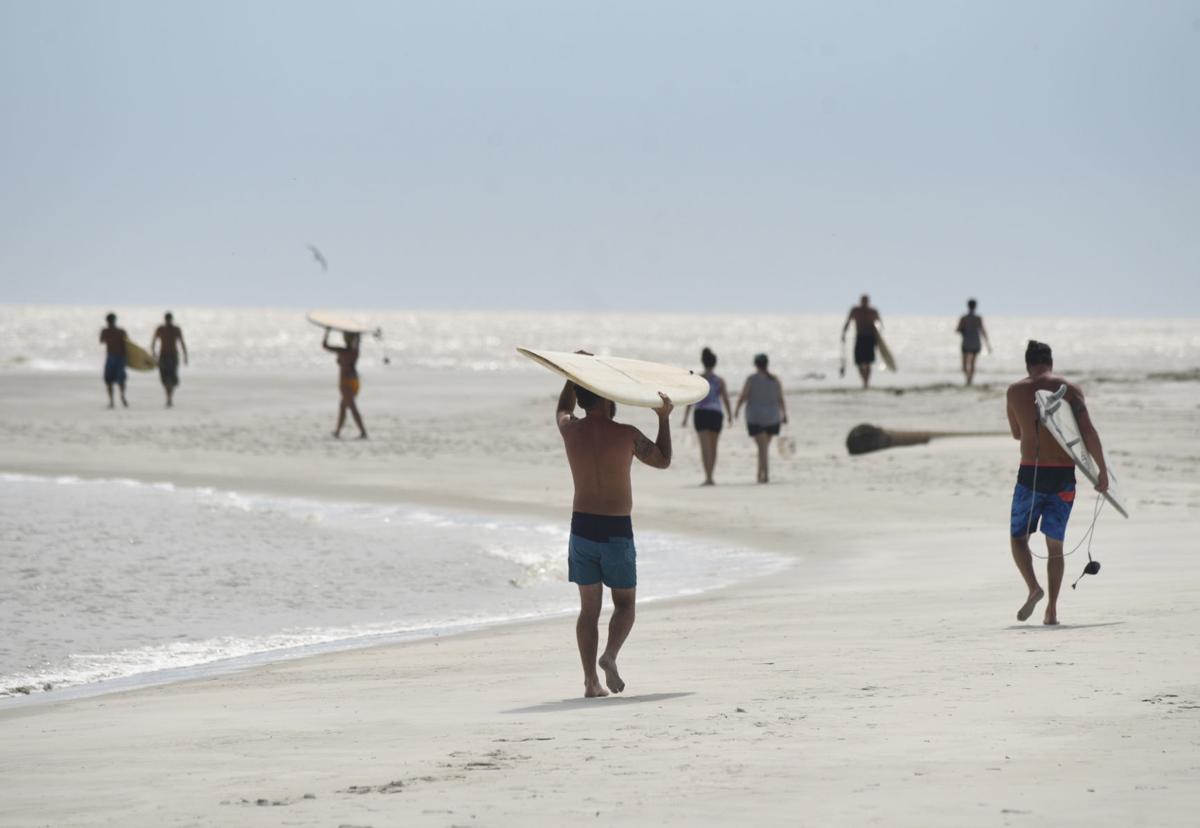 Surfers head for the waves on the beach at Gould’s Inlet on St. Simons Thursday morning.

A family enjoys a stroll at Neptune Park on St. Simons Thursday morning.

A surfer, above, heads out to catch the waves at the Gould’s Inlet beach on St. Simons Island on Thursday morning.

Surfers and paddleboarders take advantage of the post-hurricane surf at Gould’s Inlet beach on St. Simons.

Surfers make their way down the beach at Gould’s Inlet on St. Simons on Thursday.

Surfers head for the waves on the beach at Gould’s Inlet on St. Simons Thursday morning.

And to local residents’ immense relief, the workers cranked up leaf blowers instead of chainsaws.

Hurricane Dorian passed the Golden Isles much more quietly than was once anticipated, leaving little damage in its wake in Glynn County. The community breathed a sigh of relief, then began their return to normalcy.

Stores and restaurants quickly began to take boards down from windows, remove sandbags and welcome back customers. College of Coastal Georgia planned to reopen its residence halls Thursday night, and Glynn County Schools announced that classes would resume Friday.

After days of anxiously waiting, Glynn County was spared by Hurricane Dorian.

“It’s nothing short of a miracle,” said Alex Binkney, a St. Simons resident, sitting on her yellow golf cart in the Pier Village on Thursday morning. She’d stopped to chat with sheriff’s deputy Randall Lacey, who stood near the pier greeting familiar faces.

Binkney returned to the island early Thursday morning after spending a night with family in a Jesup hotel. She has lived on St. Simons for 70 years and stayed home during the past two hurricanes. But her vivd memories of a night spent waiting out Hurricane Irma left her with little desire to repeat the experience.

“The day after Irma, I told my husband I will never stay again,” she said. “But then when (Dorian) came, I said I can’t leave … It’s silly not to leave. You’re really silly not to, but I didn’t want to.”

When Dorian began showing signs in Glynn County on Wednesday morning, Binkney panicked at the sound of tree limbs falling on her house. She decided at the last moment to evacuate, but returned before 7 a.m. Thursday to find no damage at her oceanfront home.

“We’ve been very lucky,” she said.

Gov. Brian Kemp lifted the mandatory evacuation order Thursday for all areas of coastal Georgia east of Interstate 95. Hurricane Dorian had moved past Georgia and toward the Carolinas, where the storm was less merciful.

Glynn County evacuees, though, were able to begin their journeys home. Those who did not evacuate enjoyed a sunny day before returning to work and school on Friday.

“It’s nice that we don’t have to worry about clean up, that’s for sure,” said Brunswick resident Halley Hardison, while walking through Neptune Park with her family and dogs. “The weather’s pretty, especially after the unknown from yesterday. It’s nice.”

Surfers took advantage of storm-intensified waves on St. Simons beaches, and nearly a dozen people were out in the water at Gould’s Inlet on Thursday before high tide.

“Usually it’s better after a hurricane. Before it’s usually pretty windy,” said Blythe Island resident Rich Thomas, who came out with several friends to enjoy the waves. “… You can’t miss an opportunity.”

Thomas, like many others, expressed relief that Glynn County did not experience the previously predicted damaging winds, flooding storm surge or heavy rains that Dorian threatened to deliver.

“We got lucky,” he said. “The Bahamas, not so much … I’ve been surfing 34 years, and I’ve never seen a Category 5 like that stall out over one place.”

Rev. Alan Akridge, rector at St. Mark’s Episcopal Church in Brunswick, spent the morning helping some residents pick up limbs before heading to Gould’s Inlet to paddle board with his family. Dorian, he said, provided a chance to rehearse preparation protocols before the next potential storm.

“For us, this was kind of like a really great practice run,” he said.

Thankfully, though, the storm did not bring the kinds of damages Glynn County residents spent nearly a week fearing.

“When I hear those motors, and they’re leaf blowers and not chainsaws, it makes me happy,” Akridge said.

The Glynn County police chief and three former members of the county police leadership face a combined 20 charges in an indictment issued late Thursday night by a county grand jury.

John Teel, who served as the second president of College of Coastal Georgia when the college was a two-year program, died Wednesday at 93.

Jennifer Vamudio believes First Fridays are an opportunity for downtown Brunswick businesses to showcase their wares and services.