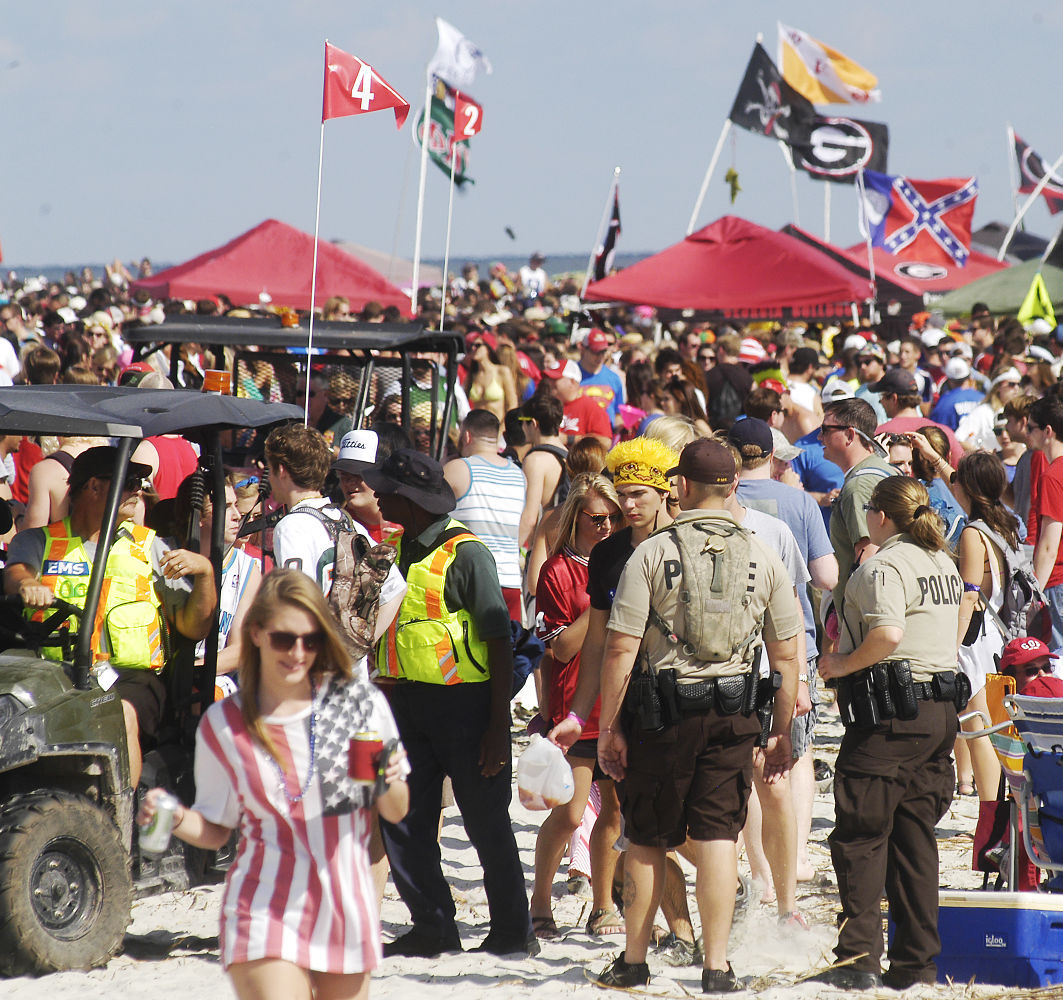 Glynn County Police Officers and an EMS crew wade through the crowd Friday at the massive beach party that descends on St. Simons Island prior to the annual Georgia-Florida football game in Jacksonville. 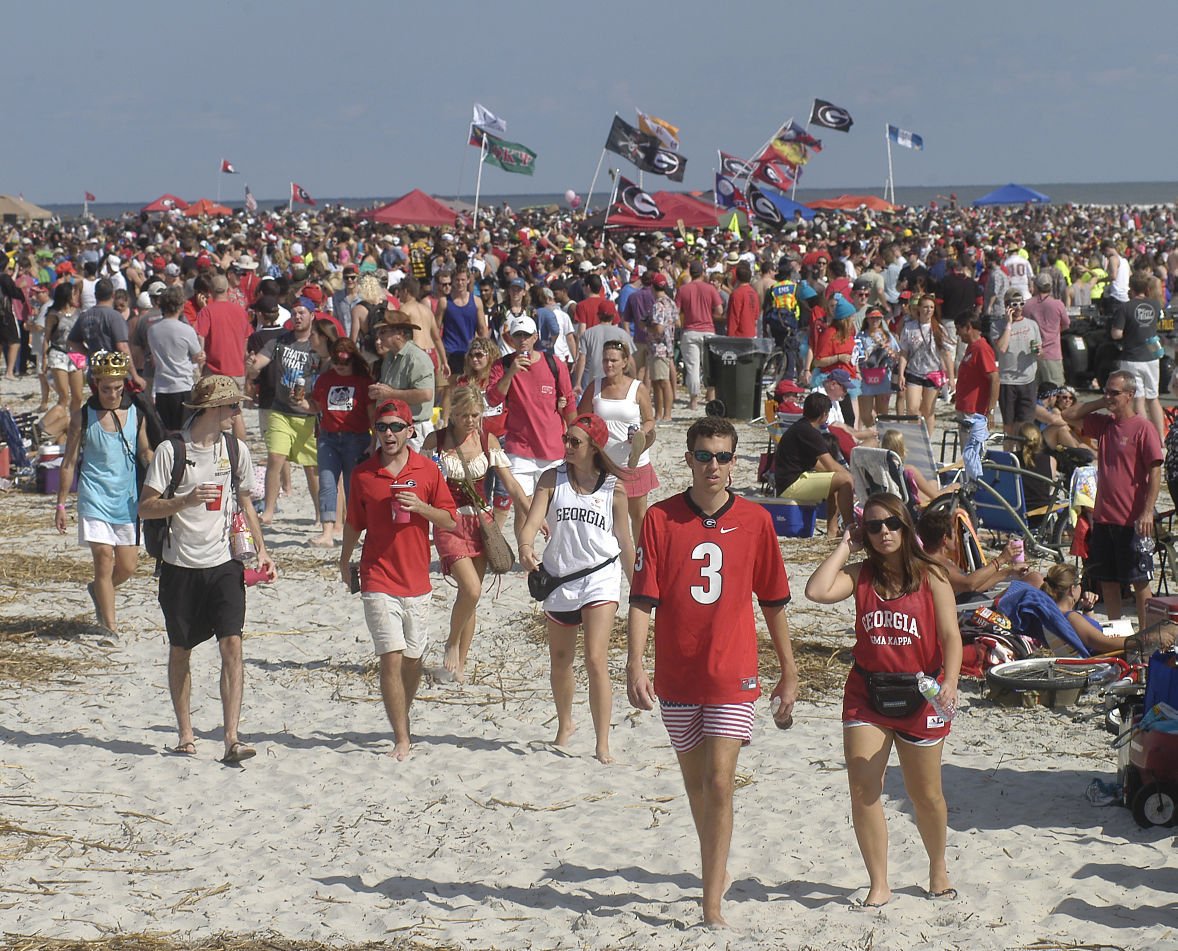 University of Georgia senior John Cornell, wearing the No. 3 jersey, and sophomore Ashley Pacilio, to Cornell’s right, find a clear spot to walk down the beach during the annual beach party prior to gridiron clash between UGA and the University of Florida in Jacksonville. 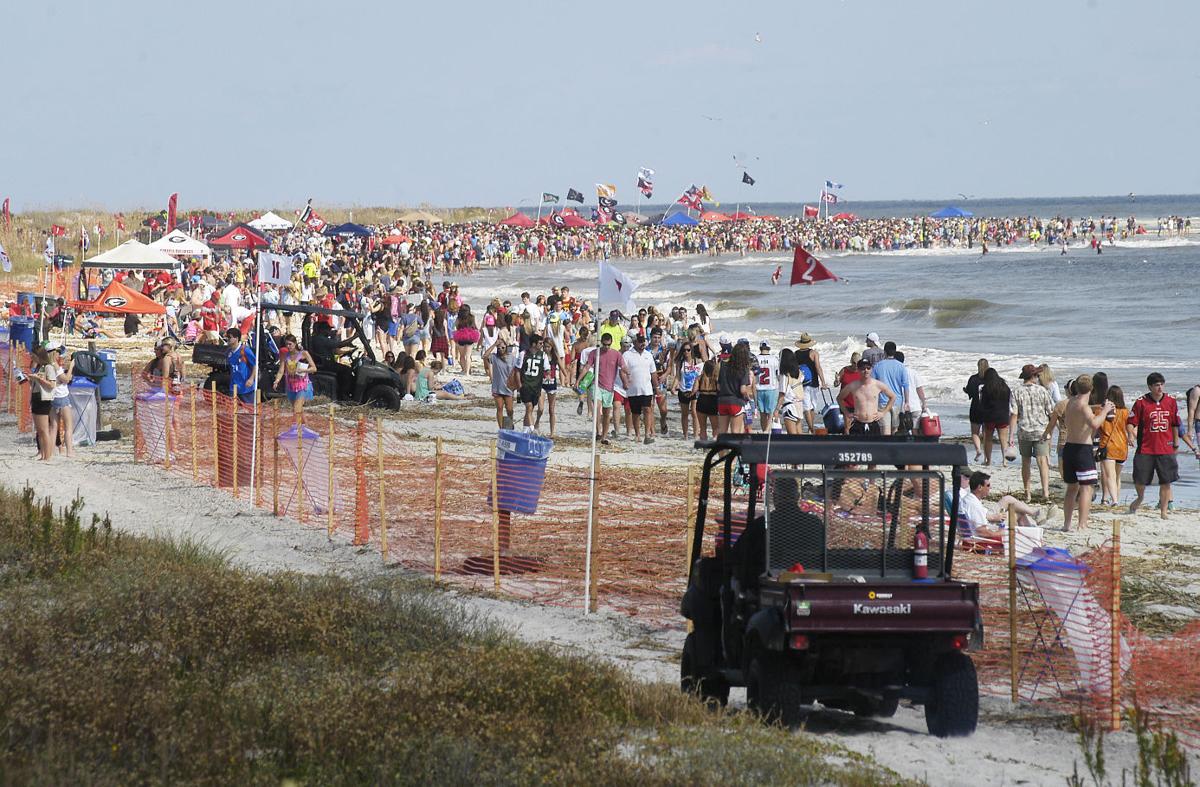 Glynn County Police Officers and an EMS crew wade through the crowd Friday at the massive beach party that descends on St. Simons Island prior to the annual Georgia-Florida football game in Jacksonville.

University of Georgia senior John Cornell, wearing the No. 3 jersey, and sophomore Ashley Pacilio, to Cornell’s right, find a clear spot to walk down the beach during the annual beach party prior to gridiron clash between UGA and the University of Florida in Jacksonville.

If a college student finds himself sitting in the Glynn County jail Nov. 2 instead of in a classroom in Athens, he can’t say Police Chief Matt Doering did not warn him.

Law enforcement efforts will be significantly stepped up this year during the annual underage drinking binge that occurs on St. Simons Island on the Georgia/Florida college football weekend. The game is set for Oct. 31.

The measures include driving under the influence checkpoints on the island Friday and Saturday nights and a team of 60 officers dedicated to policing underage drinking, littering and foul behavior, Doering said.

And to make sure the college crowd and police are all on the same page about what to expect, the Glynn County Commission is sending a letter to the two colleges involved — as well as other area schools — outlining the details of the proposed enhanced enforcement efforts.

“We usually send out letters every year, but this one is a little more proactive,” Doering said Monday. “We don’t want to just react to improper behavior this year. We want to respond to it in a way that people who know they are underage will not engage in these activities. We’re giving them fair warning that we’re very serious about making sure people follow the law this year.”

The county commission is expected to approve the letter at its meeting at 6 p.m. Thursday at the old Glynn County Courthouse in Brunswick.

County Commissioner Bill Brunson said such a crackdown is long overdue. Brunson hopes that for their own sakes, the youngsters attending the festivities will take the warnings seriously.

“We hope that this letter is the equivalent of a nuclear submarine, and that we never have to fire a missile,” Brunson said. “We’re trying to nip this thing in the bud. At some point we need to do it for the protection of the kids.”

St. Simons Island has for generations been the gathering spot for Bulldog fans who come to Georgia’s annual college football showdown in Jacksonville with their archrival, the University of Florida Gators. The game itself, played on neutral ground in Jacksonville, was once billed by the Guinness Book of World Records as the World’s Largest Outdoor Cocktail Party.

East Beach on St. Simons has earned the designation “Frat Beach” when thousands of college students take it over for a rowdy, drunken bash that leaves the sands strewn with empty bottles, cans and other trash. Many of the students involved appear oblivious that the legal drinking age is 21 years old in Georgia.

Doering said underage drinking will be diligently policed this year, and the law will be strictly enforced against all those caught breaking it.

“Violators will be cited on the scene or arrested as an offense warrants,” states the letter, addressed “Dear Colleges, Universities and area High Schools.”

Island resident and former Glynn County Commissioner Cap Fendig praised the efforts, saying that, in the long run, young lives might be saved. Fendig, who operates Lighthouse Trolleys on the island, has long advocated curtailing the excessive underage drinking associated with the festive weekend.

“I think it was sorely needed,” Fendig said. “I think many parents who know that their kids are going down to a weekend where there are some inherent dangers will be thankful to our community leadership for stepping up and doing all they can to protect their children. I really commend the efforts for a fresh perspective, which is proactive rather than reactive.”

Doering said Glynn police will commit 30, two-officer teams to St. Simons for the weekend, as well as plainclothes officers.

In addition to underage drinking, they will be on the lookout for folks behaving badly in general, from violating litter laws to relieving themselves publicly.

Anyone drinking who is questioned for a suspected offense also will be asked for proof of age, Doering said.

Police will have computers on hand for more efficient and expedient age checks, he said.

“We will have dedicated enforcement teams in the parks, on the beaches and anywhere else beach-goers are,” he said. “They will be actively looking for violations. If you litter, then we have a legal reason to ask for your name and ID. If you can’t make it to the bathroom, same thing. Underage enforcement is going to be based on other violations of the law as well. Illegal activity won’t be tolerated; if you do break the law, you can expect that an officer will find you. And they will cite you or you will be arrested, according to the offense.”

In addition to helping ensure the safety and welfare of the public, the medical staff will help expedite clearance of exceedingly drunk suspects who are bound for jail.

Police will operate drunken driving checkpoints on Friday and Saturday, he said. Getting drunk drivers off the road is the primary consideration.

“Public safety always takes precedent over inconvenience,” Doering said. “Do not drink and drive. If you do, we will catch you.”

In the long run, Doering and other county officials hope the advance warnings are heeded. He hopes everyone obeys the law and has a good time.

“I’m hopeful we don’t have to arrest anyone, but we’re prepared to do so should people do things they shouldn’t be doing,” Doering said. “We’re putting more emphasis on prevention, notifications and awareness.”

Reporter Larry Hobbs writes about government, public safety and other local topics. Contact him at lhobbs@thebrunswicknews.com or at 265-8320, ext. 320.

Oil began leaking Thursday from the shipwrecked Golden Ray and into the St. Simons Sound, viewed by experts as a sad inevitability as work progressed to cut free the vessel’s engine section.

Several consecutive days of rain earlier this month may have caused slight delays in construction of a roundabout at the intersection of Kings Way and Frederica Road on St. Simons Island, but not enough to push the expected completion schedule back.

A majority of Glynn County commissioners are content to completely drop the subject of a beach parking fee on St. Simons Island for the foreseeable future.

After replacing a few lengthy sections of cutting chain and entirely revamping the rigging in the colossal VB 10,000 crane vessel, cutting on the shipwrecked Golden Ray could resume as early as Thursday, according to Unified Command.

For a lot of folks, dressing up, styling hair, and wearing fancy ma… Read more

Ships that Sail the Golden Isles

Wedding days should be picture-perfect

“After all these years, I still look at my wedding photos daily. Th… Read more

Creating precious moments in a nursery

Women and sports: They just belong

Spoiler alert: Women are taking over the sports media industry, one… Read more