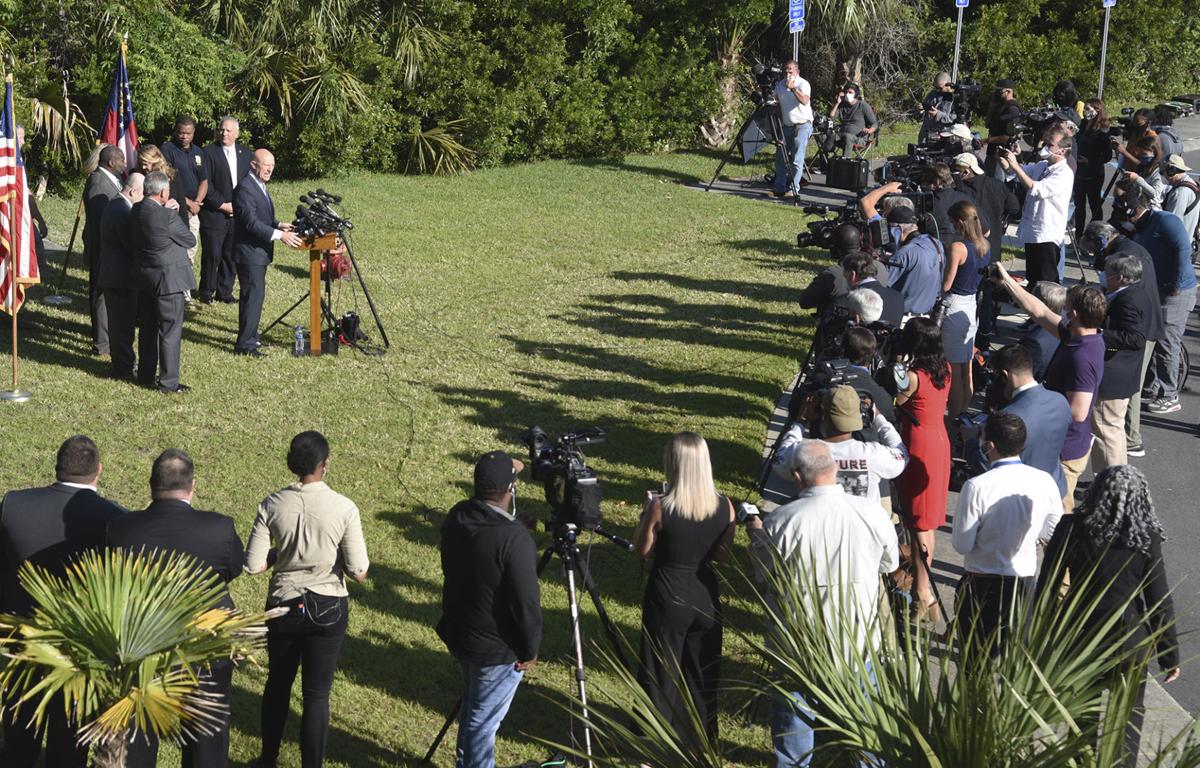 Goergia Bureau of Investigation Director Vic Reynolds addresses the media during a press conference held at The Department of Natural Resources headquarters Friday. 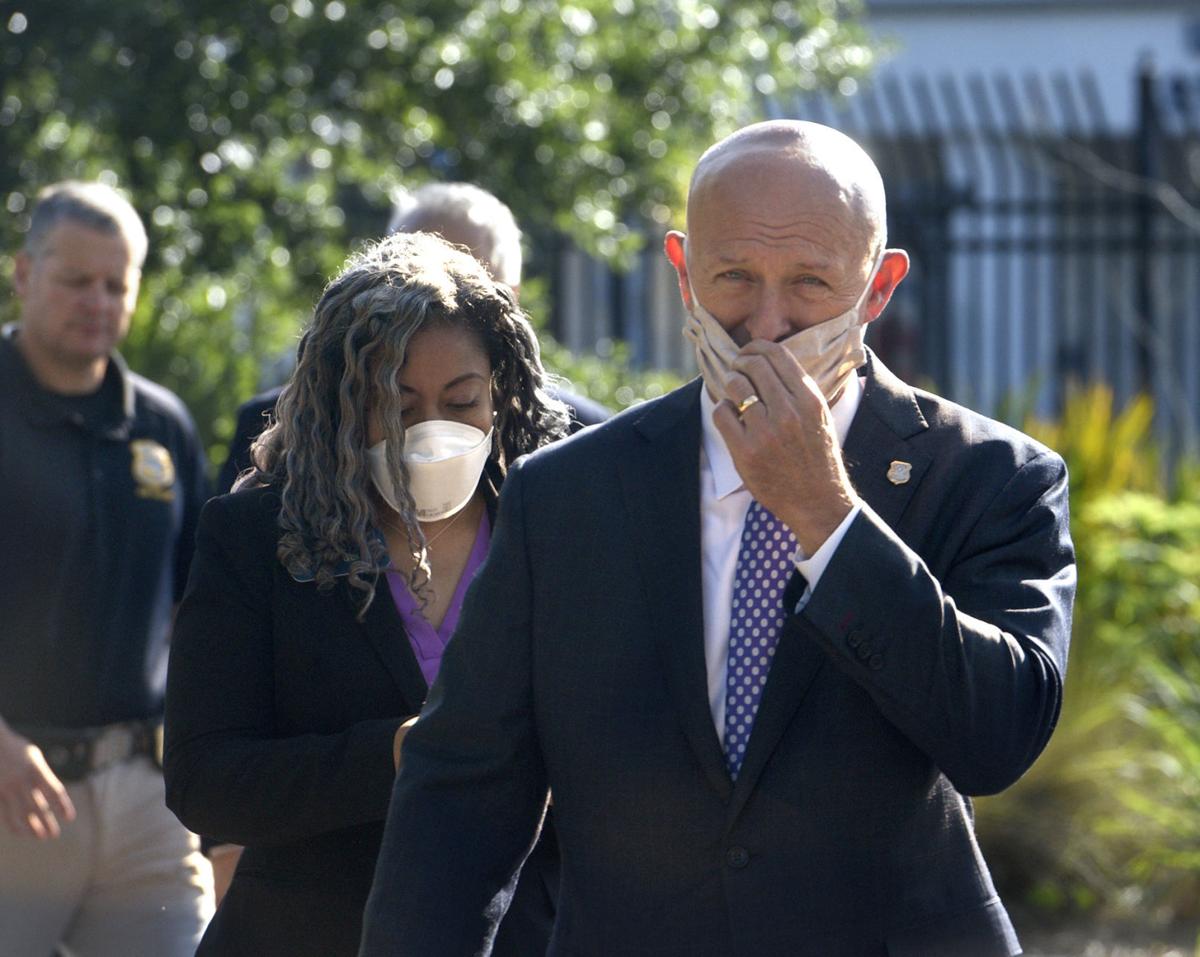 Georgia Bureau of Investigation Director Vic Reynolds arrives at the Department of Natural Resources Friday morning to address the media on the arrests of Greg and Travis McMichael. 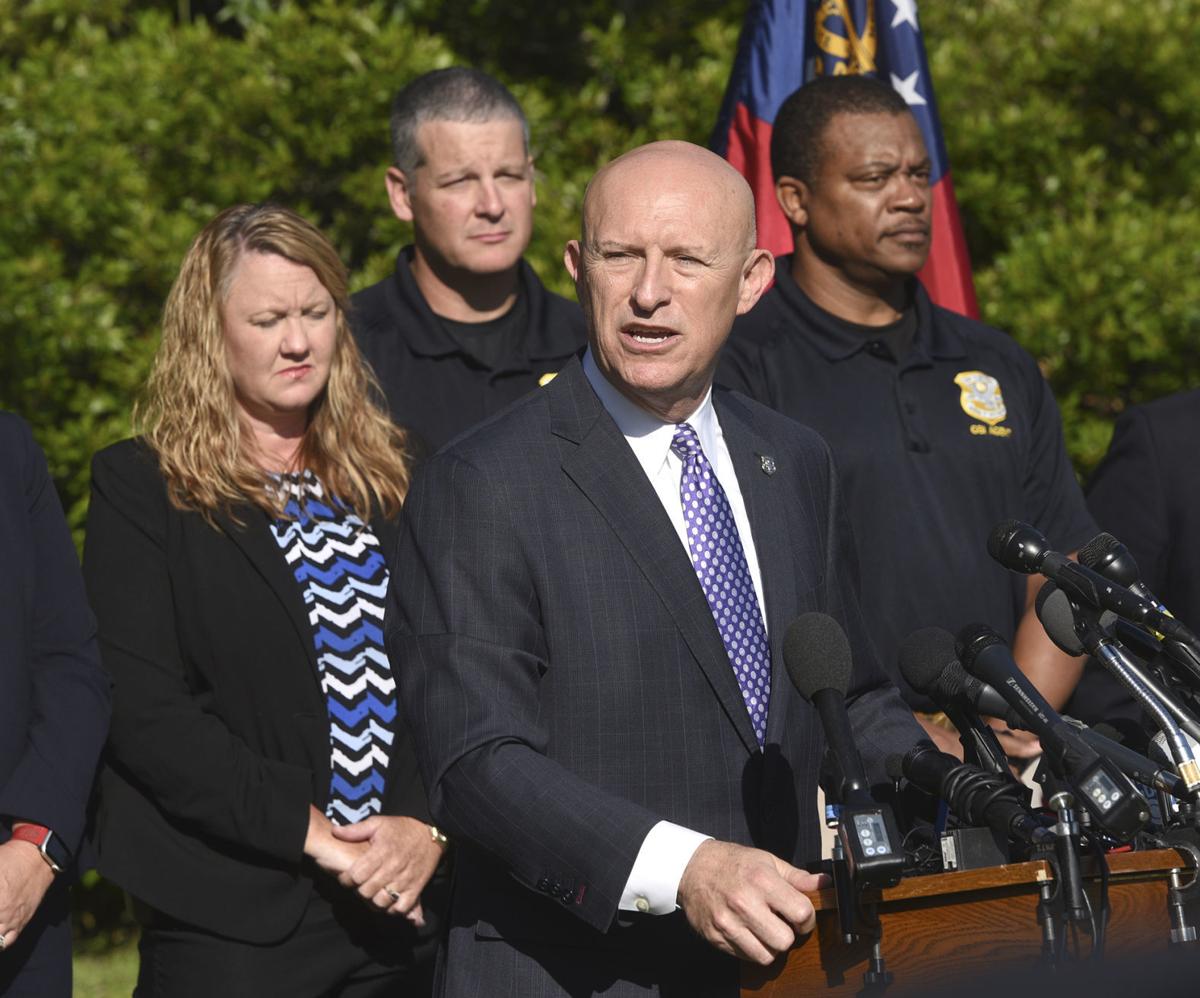 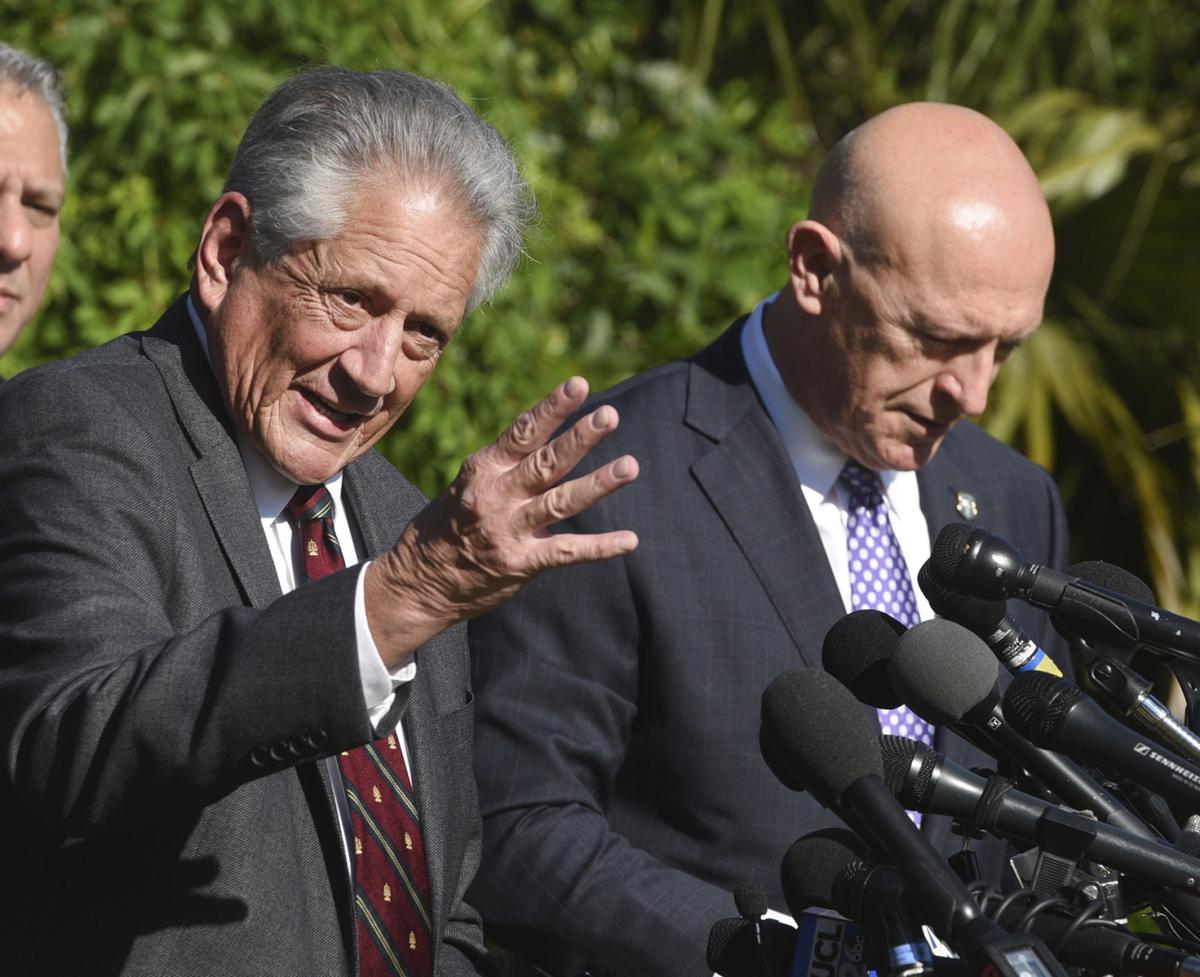 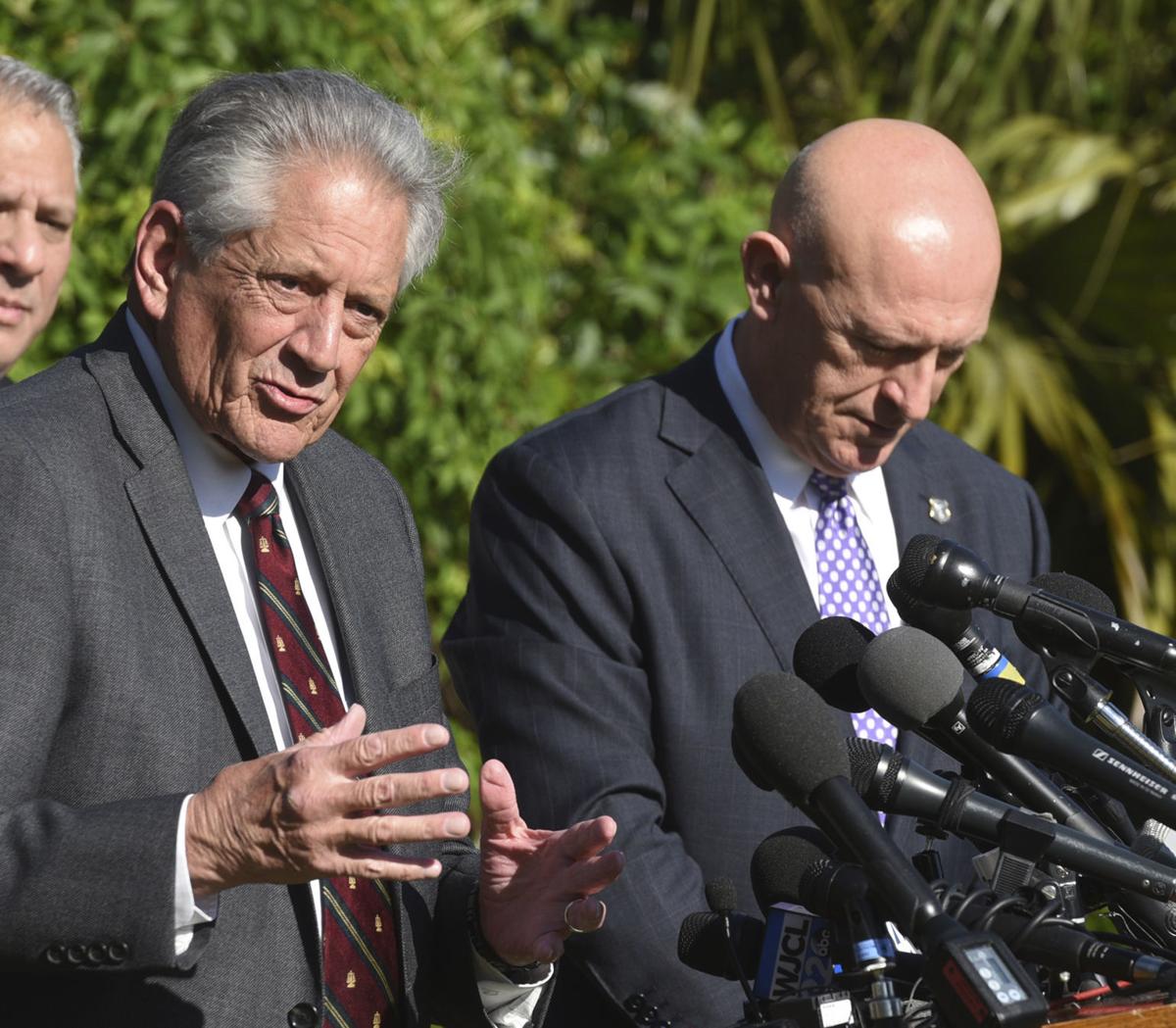 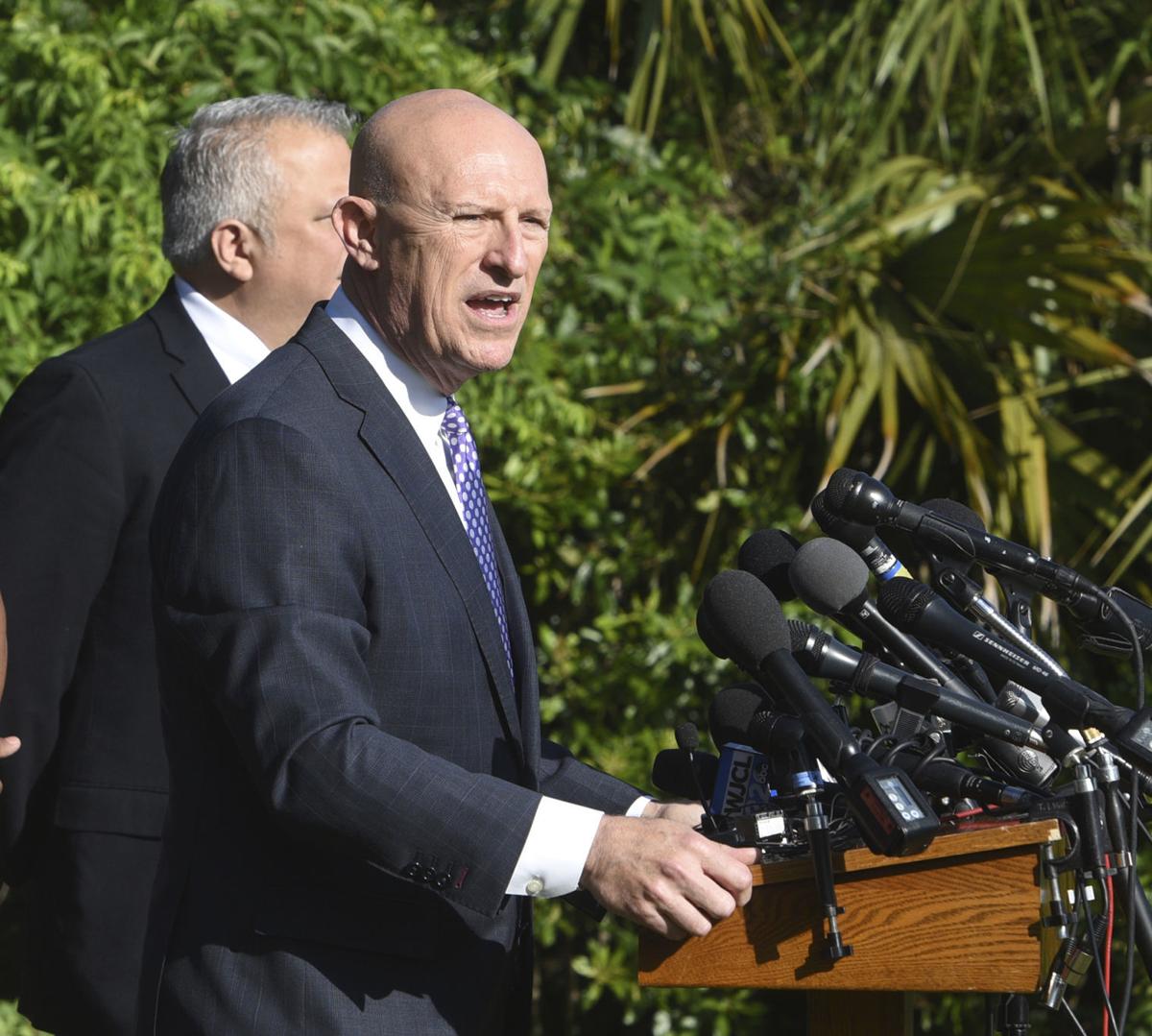 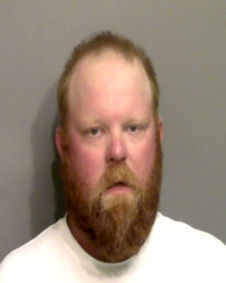 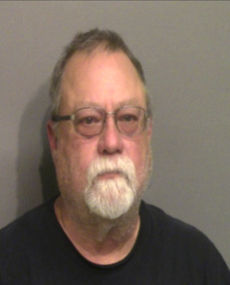 Goergia Bureau of Investigation Director Vic Reynolds addresses the media during a press conference held at The Department of Natural Resources headquarters Friday.

Georgia Bureau of Investigation Director Vic Reynolds arrives at the Department of Natural Resources Friday morning to address the media on the arrests of Greg and Travis McMichael.

What Coastal Georgia’s legal and law enforcement community failed to do in two and half months, the Georgia Bureau of Investigation accomplished in roughly 48 hours this week.

Travis McMichael, 34, and his father Gregory McMichael, 64, were led in handcuffs Thursday night from their Satilla Shores home by GBI agents, arrested in connection with the Feb. 23 shooting death of Ahmaud Arbery. Both men are charged with felony murder and aggravated assault.

The two are being held without bond in the Glynn County Detention Center.

After Gregory McMichael saw Arbery running down Satilla Drive around 1 p.m. that day, the Michaels are accused of arming themselves, getting into a pickup truck and pursuing Arbery down the street to a deadly confrontation. Arbery was black; the McMichaels are white.

Arbery’s shooting death after a confrontation with the two men on a Sunday afternoon in a quiet neighborhood has raised a tidal wave of local, national and international furor — sparking an uproar of demands from citizens and public officials alike. The sentiment grew to rage after a chilling video of the deadly shooting was posted on a local radio station’s website Tuesday morning. The leaked video, showing Travis McMichael firing a shotgun three times as the unarmed Arbery struggled to wrest the weapon away, spread like wildfire on social media. In the video, Arbery stumbled to the pavement and died after the third shot, wearing the uniform of a jogger — shorts, T-shirts and running shoes.

County police made no arrests that day. The case slipped through two district attorney’s offices before landing on the desk of Liberty County DA Tom Durden. Durden announced Tuesday morning that evidence exists to call a Glynn County grand jury to consider criminal charges against the McMichaels men. He noted, however, that COVID-19 social distancing guidelines could prevent a grand jury from convening until mid-June. That night, Durden called on the GBI to assist with the investigation.

By late Thursday afternoon they were confident the McMichaels had committed murder and aggravated assault, Reynolds said. They went to the Glynn County Courthouse at 6 p.m. to obtain arrest warrants. Assisted by Glynn County Sheriff Neal Jump and several deputies, GBI agents arrested Travis and Gregory McMichael without incident in Satilla Shores.

Atlantic Judicial Circuit District Attorney Tom Durden, the third DA to get the case, asked for the state’s help.

“When we were formally requested to get involved by Mr. Durden, we hit the ground running early Wednesday morning,” Reynolds said. “The facts showed they had established sufficient probable cause to seek an arrest warrant against Gregory and Travis McMichael for felony murder and aggravated assault.”

Reynolds offered condolences to Arbery’s parents, father Marcus Arbery Sr. and Wanda Cooper Jones. He apologized for the long process they had to endure to see charges filed in their son’s death.

“One of the last things you want to do in circumstances of this nature, certainly a case that’s been around like this, is to ask anybody for patience,” Reynolds said. “Particularly to ask such patience of the victim’s family. It’s difficult to do. But they were gracious in extending that patience to us and we’re certainly grateful.”

Reynolds said GBI agents had seen the grim video showing Arbery’s final living moments. He would not say how much of a factor the video had on the GBI’s decision to press charges.

The GBI said county police asked the agency Tuesday to investigate who leaked the video to the public. The mystery was solved somewhat Thursday. Brunswick defense attorney David Alan Tucker issued a statement saying he released the video. The video was given him by William R. Bryan, who also recorded it while driving behind Arbery as he ran.

Tucker said he released the video to dispel perceived rumors and misinformation “because my community is being torn apart ... “

In a statement released Friday, Tucker said he does not intend to represent the McMichaels or any others who may be charged in the fatal shooting.

Reynolds said the investigation is ongoing and that more people could face charges, including Bryan. Attorneys for Arbery’s parents on Wednesday also called for charges to be presented against Bryan.

Local attorney Kevin Gough, in a statement to First Coast News, said he is representing Bryan. Gough said that his client was a witness and that he has fully cooperated with law enforcement during the investigation.

Reynolds said the investigation is ongoing and that more people could face charges, including Bryan. Attorneys for Arbery’s parents on Wednesday also called for charges to be presented against Bryan.

“If we believe there is probable cause, we will do it,” Reynolds said. “We’re still investigating everyone involved, including the one who shot that video.”

The first trial appearance Friday for Gregory and Travis McMicheal was relatively uneventful, save some forgetfulness on the part of Circuit Court Judge Wallace Harrell. The two men appeared on a big screen in the Magistrate Court room from the county jail via video, wearing jailhouse orange, while Wallace read the charges aginst them.

The deadly ordeal has left local folks from all walks life, all races and socioeconomic backgrounds questioning the integrity of county law enforcement and the area’s judicial system. Many want to know why Glynn County Police did not make an arrest that day. Others wonder why the case was not turned over immediately to the GBI, especially given the conflicts of interest presented by Gregory McMichael’s career as a county policeman and longtime investigator with the Brunswick Judicial Circuit District Attorney’s Office.

Glynn County Police responded to the shooting. No arrests were made and no details in the shooting were released. Two days later, county police still were releasing no details, saying only that it was an active investigation being conducted with the DA’s office. But Brunswick DA Jackie Johnson said later that week that she had immediately recused herself. She cited Gregory McMichael’s more than 20 years as an investigator in her office.

From there the case was diverted to Waycross DA George E. Barnhill. State Attorney General Chris Carr ultimately assigned Barnhill, but the Brunswick DA “office did assist in putting the Glynn County Police Department in contact with the District Attorney in the Waycross Circuit,” a statement Friday from the Brunswick DA said. However, Barnhill stepped down in early April after an objection from Arbery’s mother. She cited a conflict of interest because Barnhill’s son is an attorney with Brunswick DA’s office, where Gregory McMichael worked.

But before stepping down, Barnhill opined that criminal charges were not merited against the McMichaels or Bryan. In a letter to the Glynn County Police Department, Barnhill stated the men were carrying the weapons legally within the state’s “open carry” law. Also, he said, they were within their rights to conduct a citizens arrest. He concluded that Travis McMichael fired three times in self defense. Barnhill bases his conclusion in part on “the video made by William Bryan” which “clearly shows the shooting in real time,” the later states.

Barnhill’s conclusion troubles State Rep. Jeff Jones, R-St. Simons Island. Jones plans to introduce legislation that would preclude the use of deadly force in making a citizen’s arrest. If the citizen suspects deadly force may be necessary to make such an arrest, the citizen should call 911 and defer to law enforcement, Jones said.

“The citizen should be disallowed deadly force,” said Jones, who attended Friday’s morning’s GBI press conference at the state Department of Natural Resources building. “Two people took the law into their own hands and a young man died as a result.”

He noted, however, that a grand jury could not convene before mid June due to COVID-19 restriction on gatherings. Civil rights groups, members of the clergy and community leaders began immediately demanding immediate action. This included calls for prompt arrests, or else state-level authority to convene a grand jury posthaste.

By then, GBI agents statewide had already converged on the Golden Isles and began putting together the case that would lead to the McMichaels’ arrest the next day.

Being a lifeguard 'amazing and rewarding'

For Glynn County lifeguard Paris Wyland, the most memorable parts of the job are the first-time experiences.