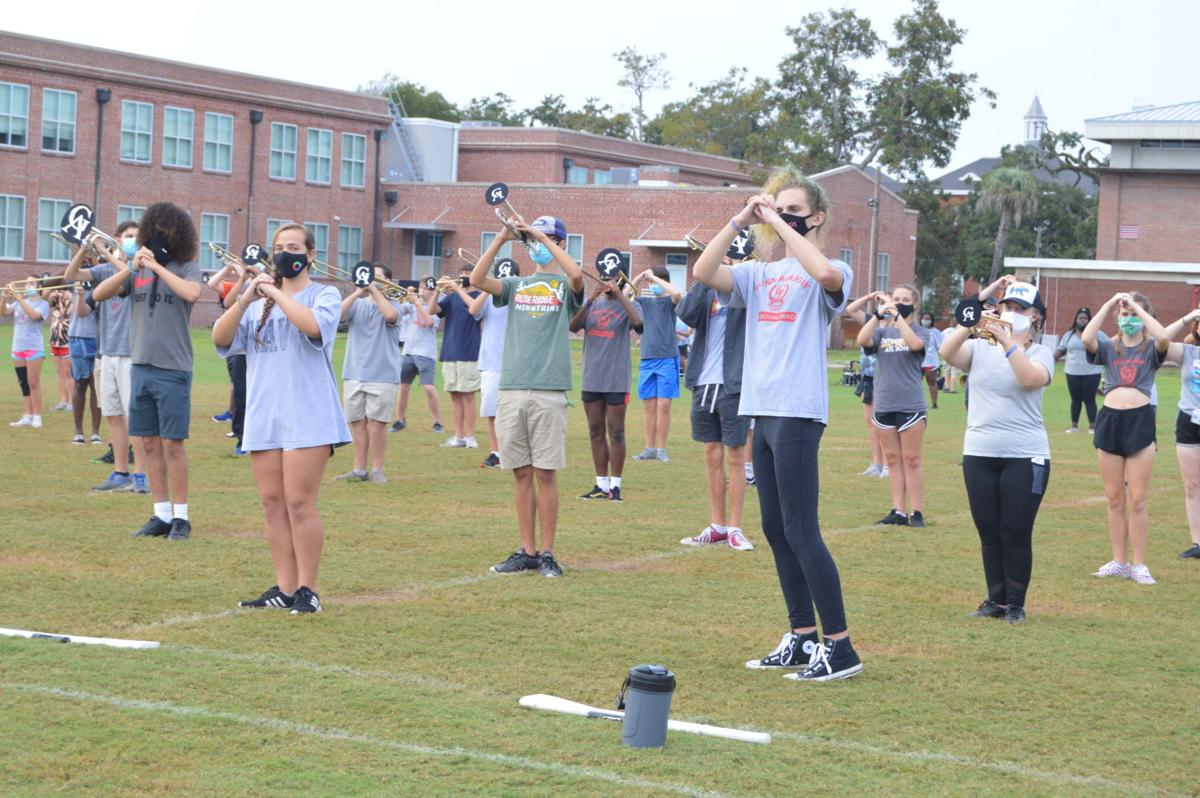 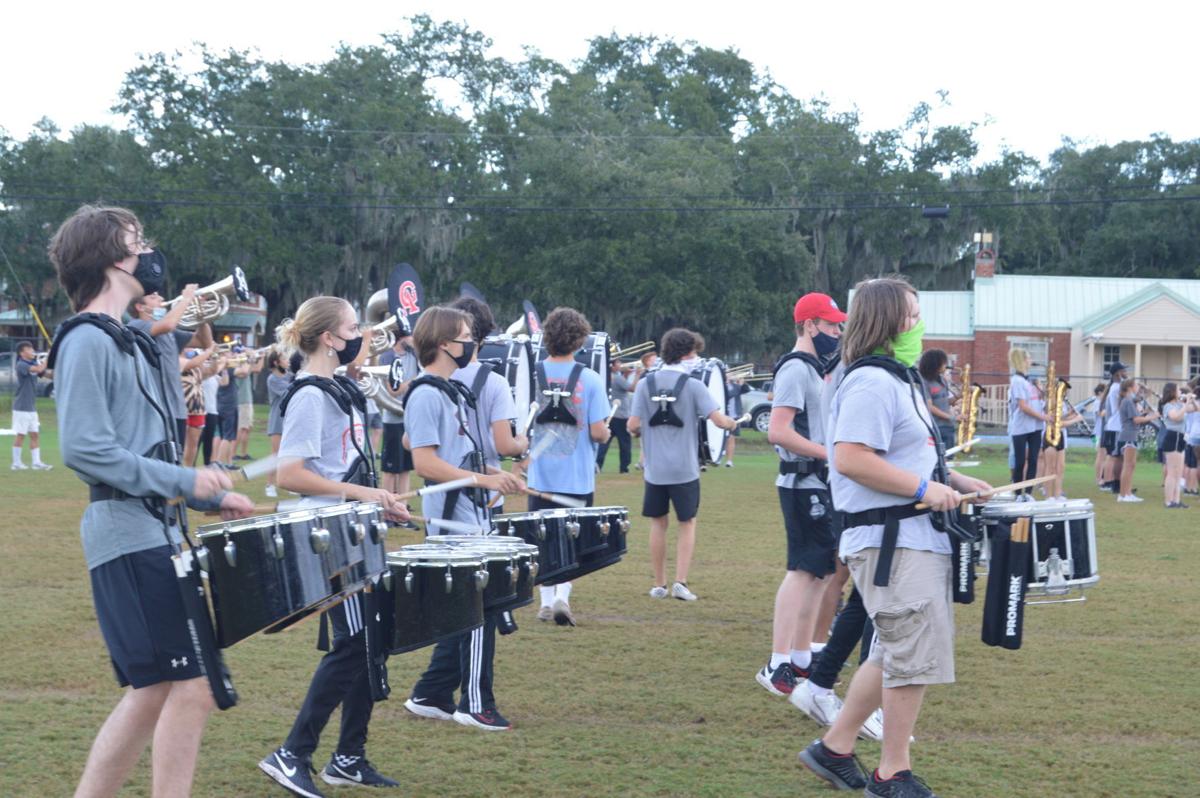 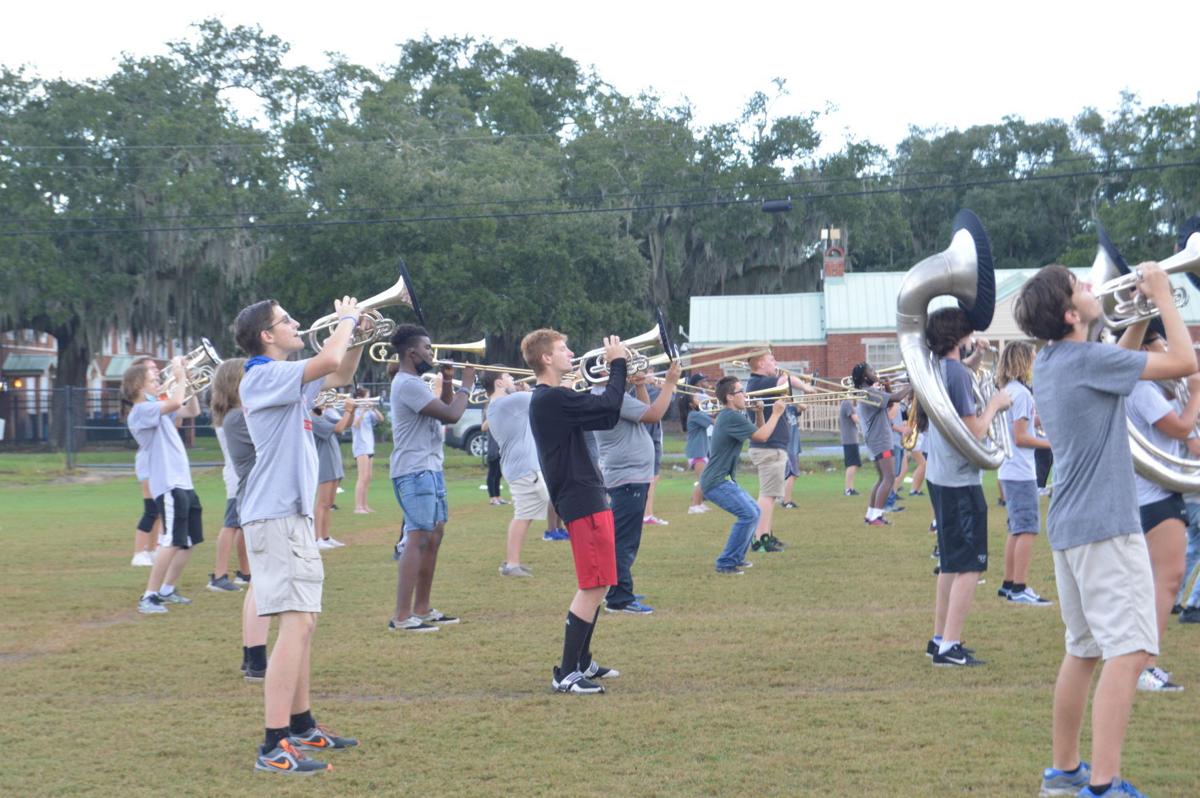 Members of Glynn Academy’s marching band have enjoyed the respite from their daily stresses through the outlets that band provides.

Regular afterschool practices and gameday performances have continued, albeit with masks and social distancing, for students and their instruments.

Today, the band will travel to Waycross for one of the few competition opportunities available this year. It will compete in the Sound of Gold contest this evening against other schools, including bands from Appling, Effingham and Bryan counties.

“I thought it was a pretty cool deal because there’s not a lot of bands that are doing it,” said Chris Duke, band director at Glynn Academy, during band practice Thursday. “And it’s exciting to get a chance to go and be a part of it.”

The band has remained active this school year despite challenges presented by the pandemic. They traveled to Effingham County a couple of weeks ago for a festival where they received straight “superior” marks.

“This week will be the last opportunity we’ll have to participate,“ Duke said. “Hopefully we’ll enjoy it and make the best of it.”

The band has maintained its presence in the stadium stands for football games and offered its usual high-energy performances during game halftimes this season.

The opportunities have been especially important this year, said drum major and senior Jacob Torbert, as so many other aspects of the school year have felt different.

“It’s helped me so much,” he said. “It’s been such a stressful year so far, and especially during our senior year, it’s the most stressful it’s probably ever been. But having band as an outlet to have more freedom and release all that stress is really nice.”

“I’m a junior so I do have a lot of the really tough classes to make sure colleges want me, but band is really my safe space with school and it’s really what I love,” she said. “I really thrive in band a lot more than in my other classes. So being here and being with everyone, even though we have to be pretty far away from each other and wear masks and everything, it’s made this year so much better than it (might) have been.”

Corinne Hill, a senior and drum major, said she would have opted to do virtual learning if band had not continued.

The students encourage the community to support the band and other arts programming in schools to ensure the programs can continue.

“Mr. Duke does get emails from GA band alumni every so often, and they’ll email him saying how much they appreciate the band and how much they love hearing us play on Tuesdays and Thursdays after school, and it means a lot,” Raczynksi said. “We love the support.”

The band has worked hard this season, and Hill said they’re excited to showcase their efforts at the competition today.

“It makes all the hard work worth it because we get to go show what we’re passionate about,” she said. “And then at the end of the day, it doesn’t matter if we win or lose. It just matters that we were out there on the field, playing our hearts out and wowing the crowd.”

Cutting along dotted lines could speed up salvage

New instructions are being established for the massive anchor chain that is shearing into pieces the shipwrecked Golden Ray: cut along the dotted lines.

Providing Compassion at a Critical Time

Providing Compassion at a Critical Time