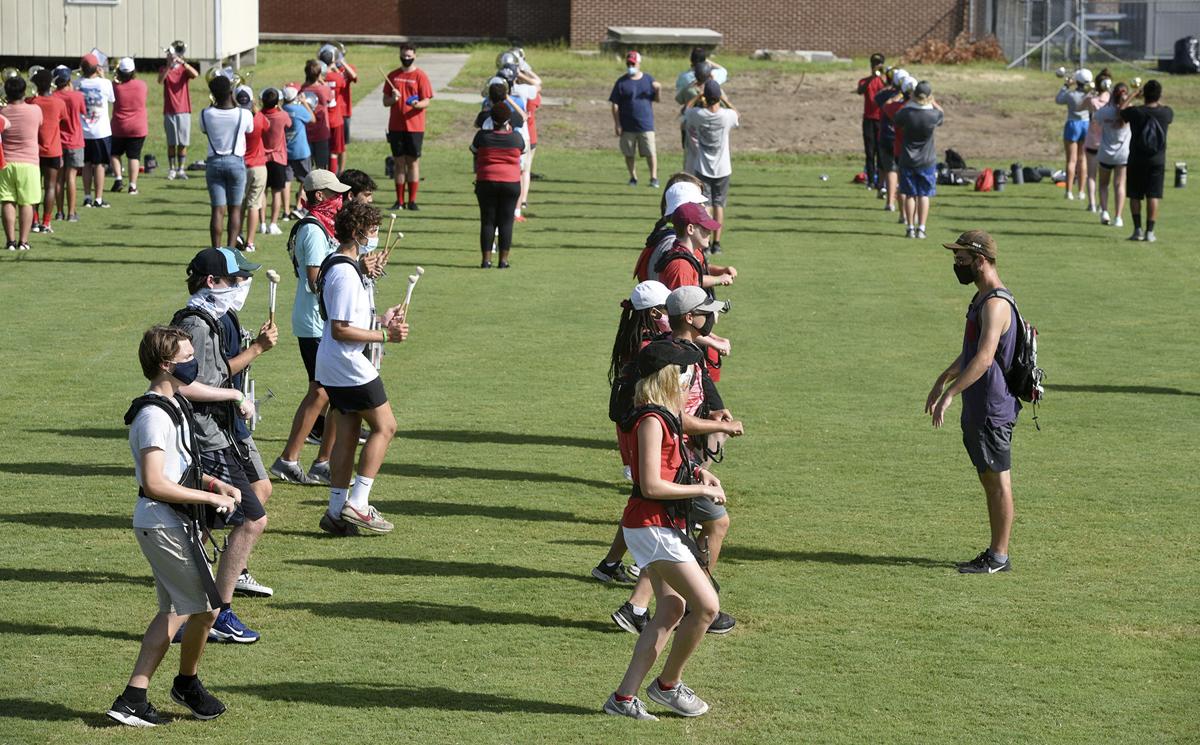 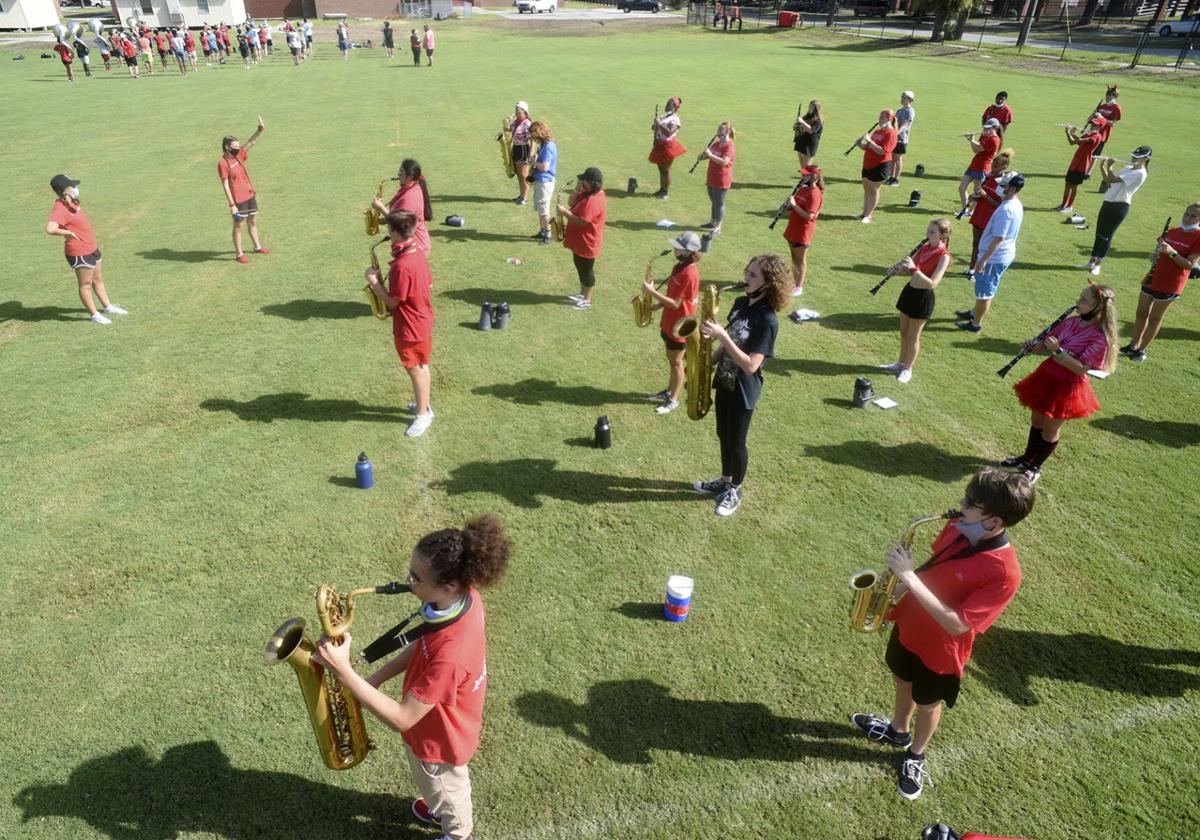 Members of the Glynn Academy marching band practice Friday on the last day of band camp. 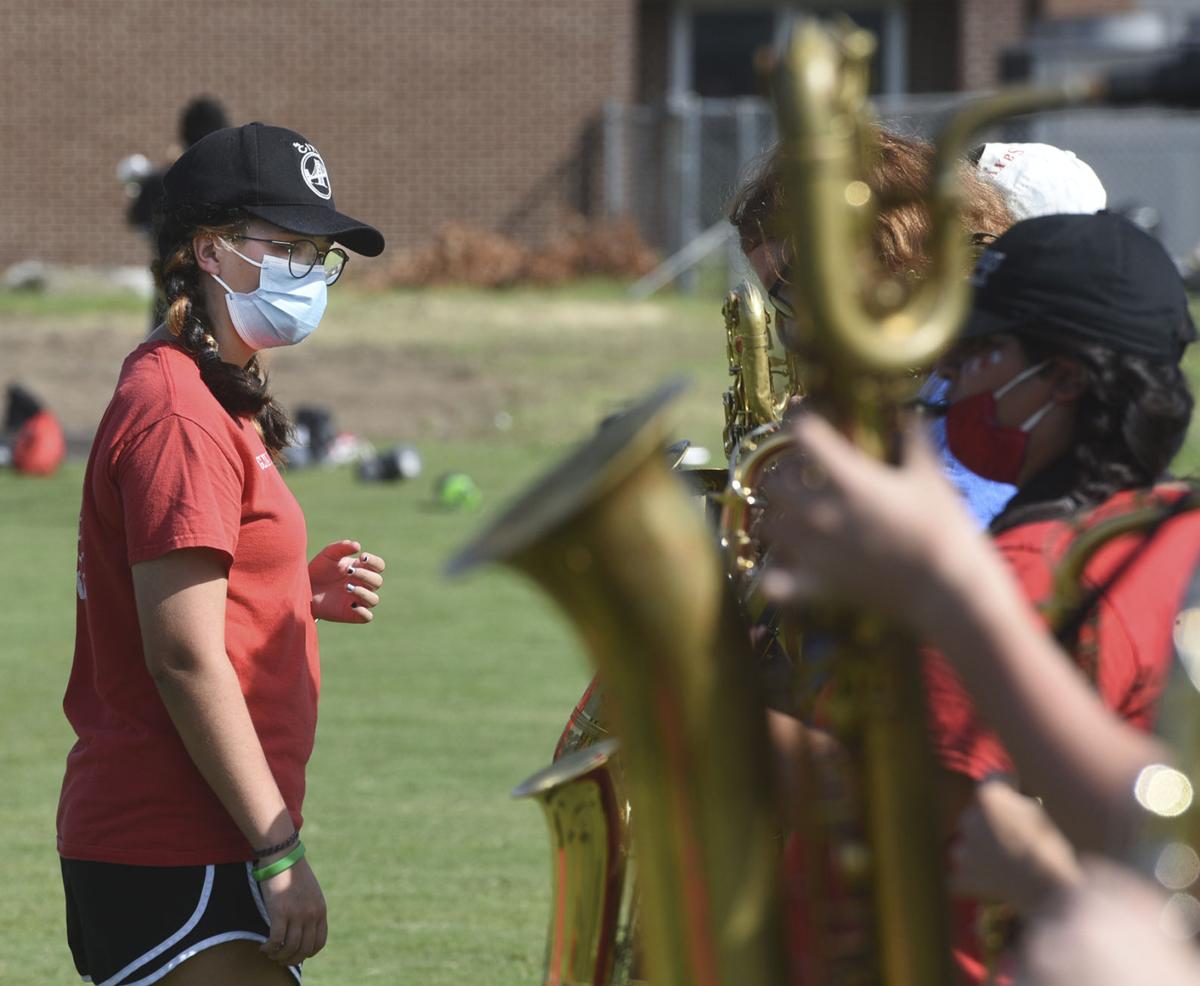 Maggie Arczynski, one of three drum majors for the Glynn Academy marching band, looks on as woodwinds practice Friday, the last day of band camp. 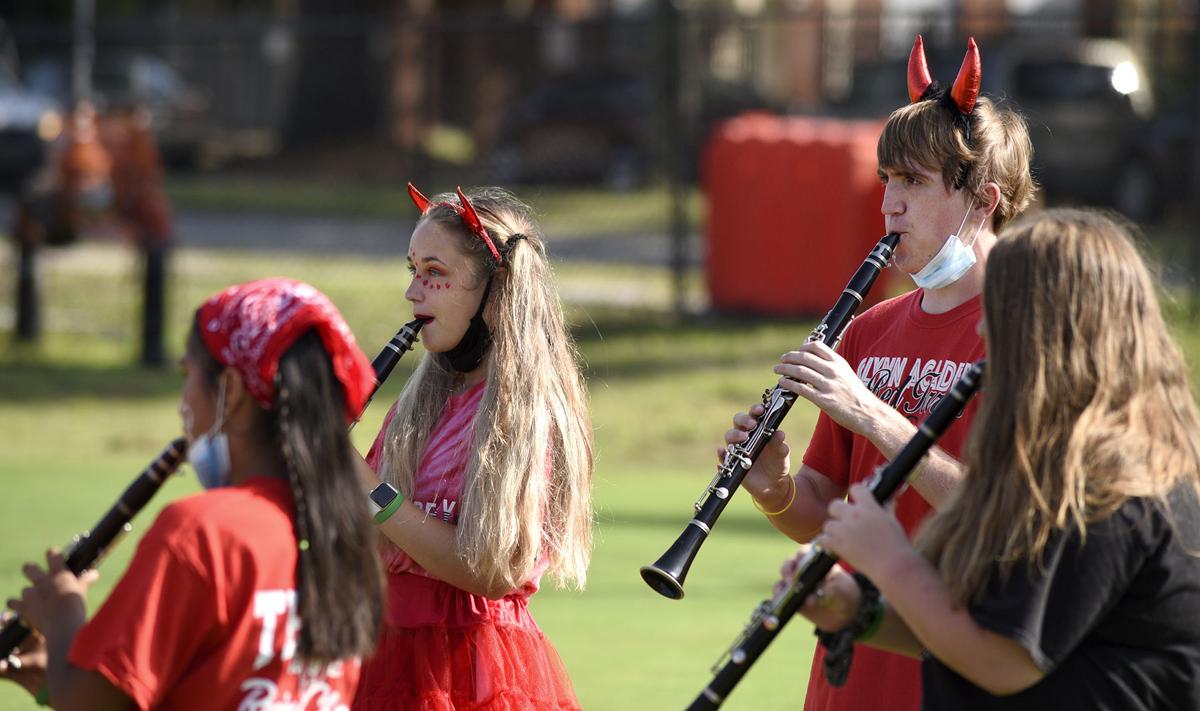 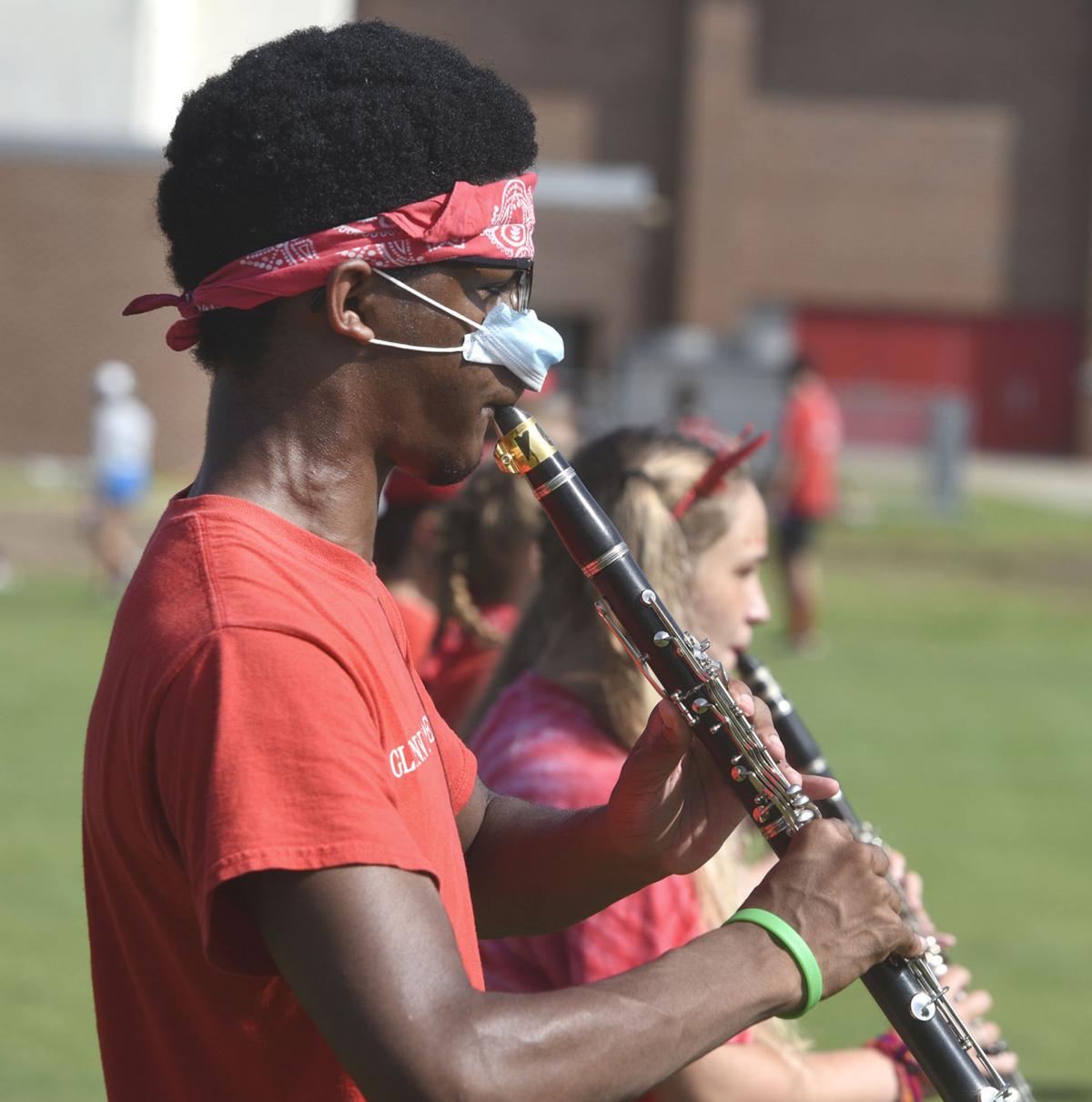 Woodwinds hone their marching skills Friday during the last day of band camp for the Glynn Academy marching band. 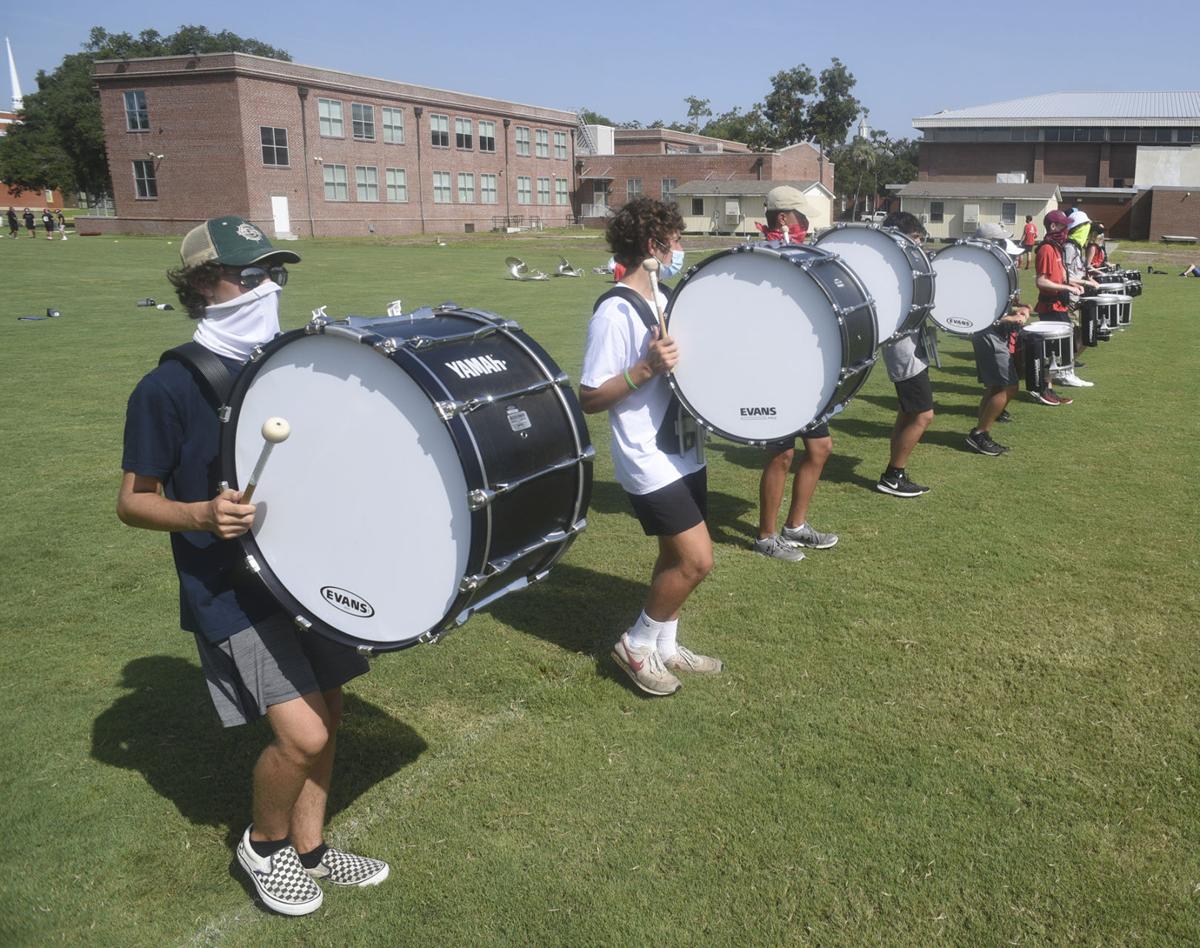 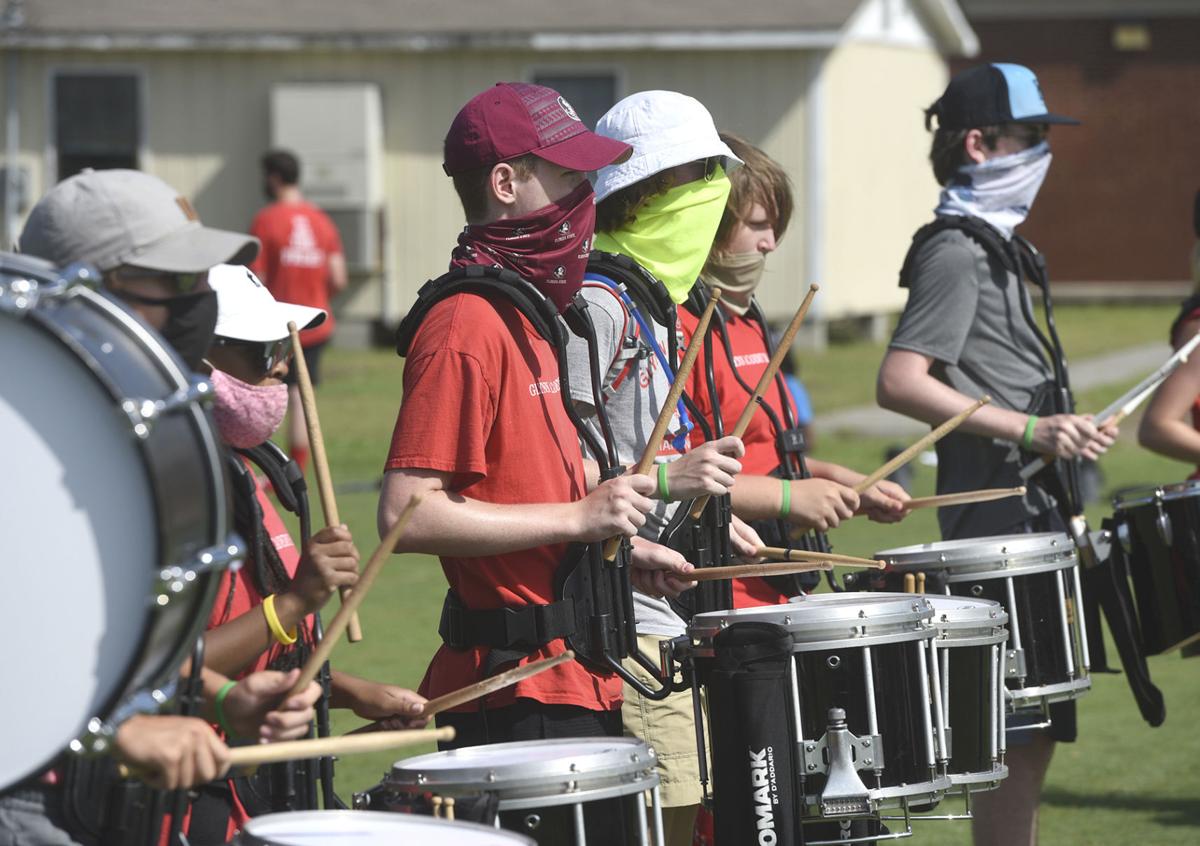 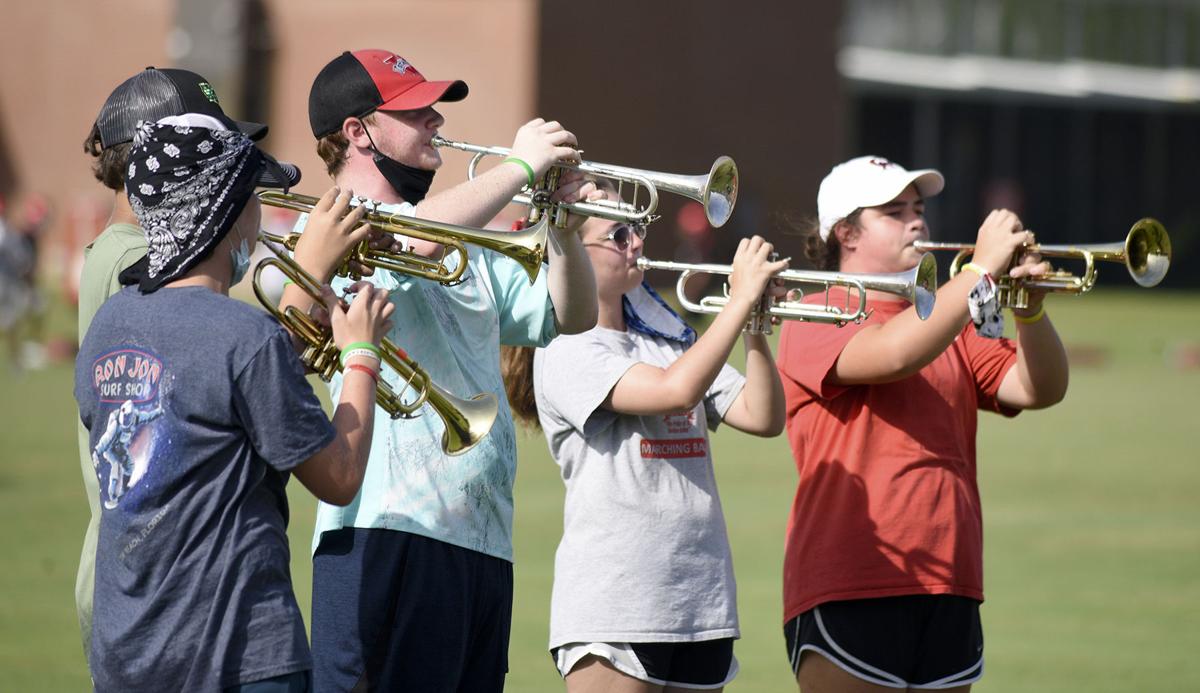 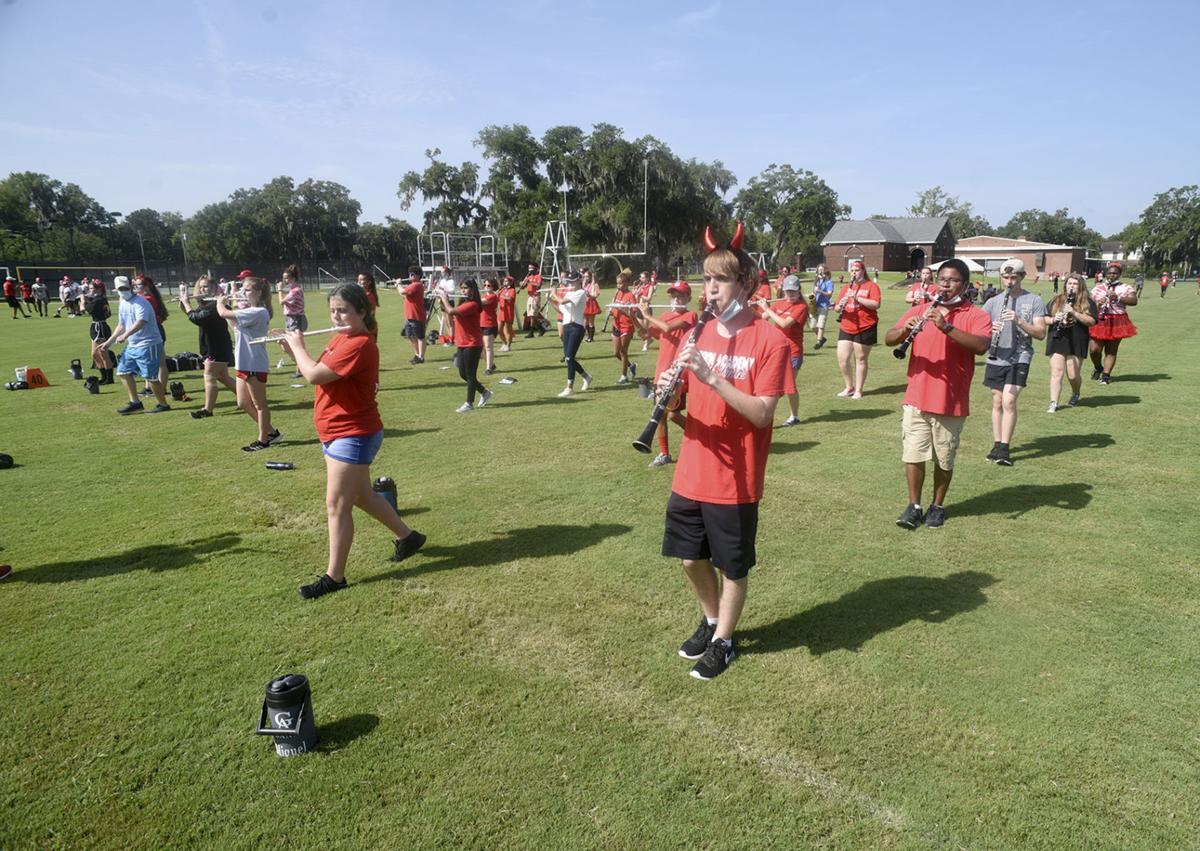 Members of the Glynn Academy marching band practice Friday on the last day of band camp.

Maggie Arczynski, one of three drum majors for the Glynn Academy marching band, looks on as woodwinds practice Friday, the last day of band camp.

Woodwinds hone their marching skills Friday during the last day of band camp for the Glynn Academy marching band.

Student energy has returned to several Glynn County campuses after months of school closure due to COVID-19.

At Glynn Academy on Friday, football players practiced on the outskirts of marching band camp, from which a cacophony of instrumental sounds filled the warm July morning air.

This year’s camp was unique from previous ones experienced by students and their band directors.

COVID-19 precautions required the students to maintain a six-foot distance from each other. They wore masks and stayed separated into groups.

“I’m really glad to be back,” said Maggie Raczynski, a junior band member and drum major. “I missed everybody a lot over the summer and the whole corona break. This band camp is a lot different from my freshman and sophomore years, like a lot different. But it’s still band camp, so I’m happy about being here.”

The camp was less about perfecting skills and more about striving for some form of normalcy after spending months apart.

Students submitted to a temperature check upon arrival each morning, and everyone left by noon each day.

No rehearsal took place inside, one of the guidelines school administrators asked band camps to follow.

Brass and winds groups rehearsed in separate areas of the campus, while color guard members practiced at nearby Glynn Middle School.

“We’re just happy to be able to be out here and to get a little bit of play,” Duke said. “This is really about for the kids being able to do something again, and it means a lot to them to be able to do this together as a group, as a team.”

“Through a normal season, as leadership comes in, they’ve seen prior leadership work and they’ve followed the examples that were set,” he said. “They applied the techniques that they had. This year, all that’s really out the window. This group of leaders is really going to have to dig a little bit deeper and learn a new style of leadership that’s very different from before.”

They’re planning to perform during the first home football game, which may not be until October, Duke said.

“It’s going to be a unique year,” Duke said. “Another cool thing about bands in general is we teach them we have to learn to adapt to the circumstances around us. They do that really, really well. I’m proud of them.”

It would have been easy to cancel marching band camp, he said. Many other school districts chose that option.

“Thank goodness for a supportive administration, for the support of the parents and for the people around us to see to it that kids were able to get back into it, obviously with some restrictions, with some new guidelines and with some adjustments to our norm,” Duke said.

Multiple spring band activities were missed due to COVID-19 shutting down schools in March. GA’s band was set to travel to a performance the very day the school closed in the spring.

This season, they do not anticipate competing or attending away football games.

To raise funds this school year, the booster club is planning a golf tournament for Sept. 14. It’s seeking teams and sponsors.

Those interested in supporting the event are asked to email booster club president Meredith Rowland at meredith_rowland@icloud.com.

Band camp is always about learning more than how to march or play an instrument, Duke said, and this summer that was especially true. Students learned perseverance and teamwork skills at camp that go beyond the field.

Those lessons are highlighted more than ever by the challenges of a pandemic.

“We do still focus on things that matter,” Duke said. “Try to shoot for perfection, be better than you were last time, don’t let the elements defeat you — that kind of stuff. But in the end, their attitude makes the difference.”