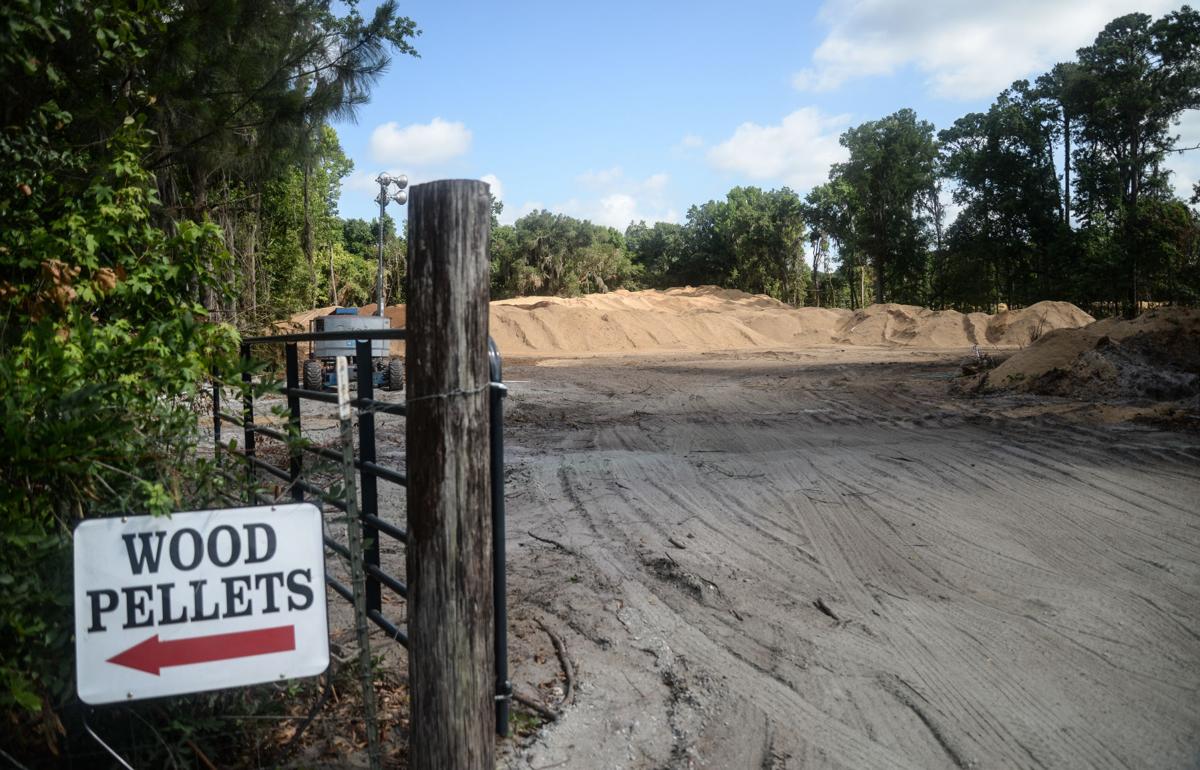 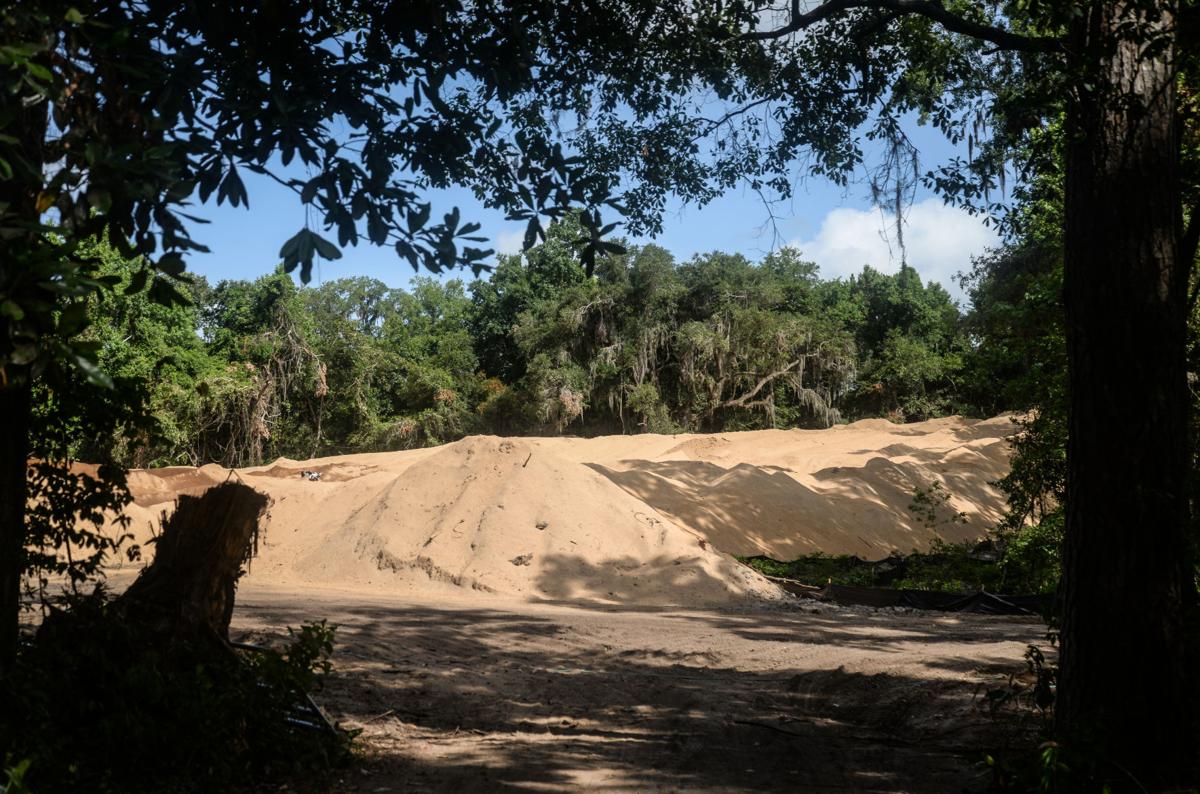 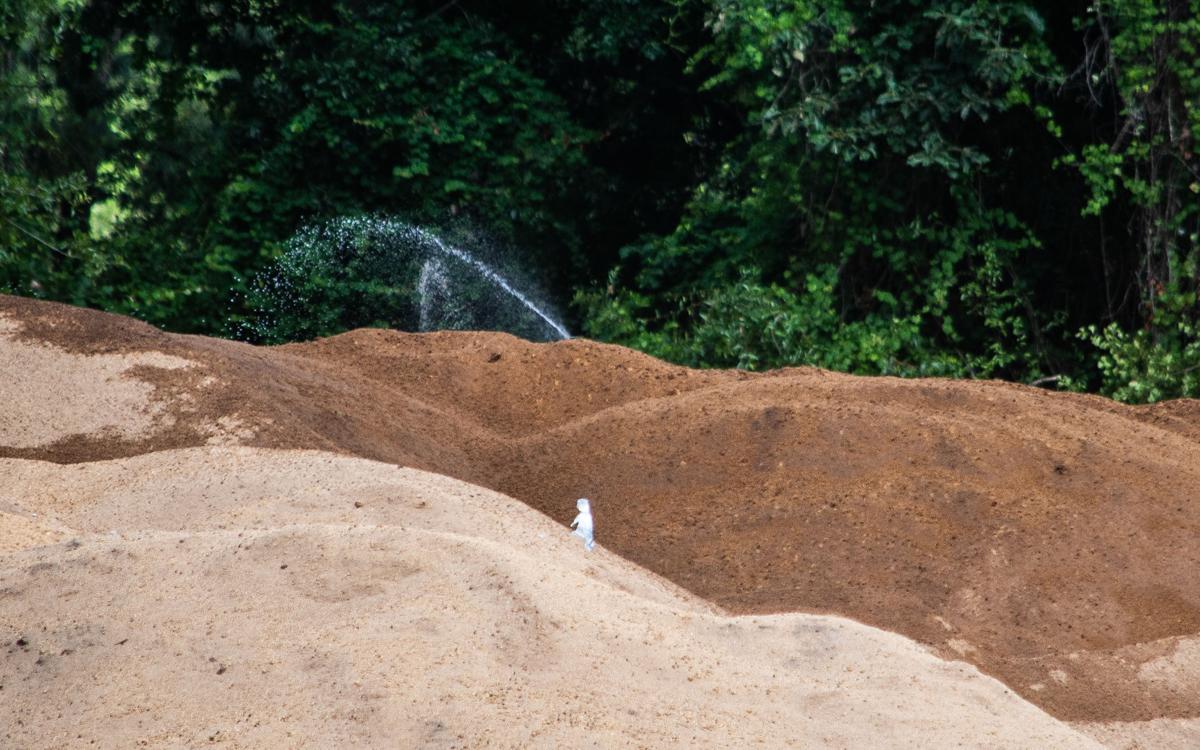 Sprinklers are kept going on part of the piles.

Sprinklers are kept going on part of the piles.

That is the view Josh Kirkland took of the sodden remains of the wood pellets that fueled a conflagration May 2 that destroyed the massive Logistec warehouse at the East River Terminal in Brunswick’s south end.

Owner of Diversified Fabricator and Erectors at 203 Glyndale Drive, Kirkland arranged to obtain the heaping piles of wood product left behind in the ruins of the 139,000-square-foot warehouse fire.

The warehouse had a capacity to hold roughly 50,000 tons of wood pellets. It was full of wood pellets when the fire started as a result of suspected spontaneous combustion within the enclosed structure, Brunswick Fire Chief Randy Mobley said. Brunswick firefighters battled the blazing inferno through that Sunday night and into the next morning with assistance from Glynn County firefighters and departments from several neighboring counties.

A Montreal-based stevedoring and shipping conglomerate, Logistec ships the wood pellets to European markets for use as biofuel in power plants. After the dousing firefighters poured on the fire, the remains are useless as biofuel.

“As far as usage, once the product gets wet it can no longer be used for its original purpose,” said Chris Tanner of Fram Renewable Fuels in Hazelhurst, Logistec’s wood pellet supplier. “It’s all damage. It’s a loss.”

Not as far as Kirkland is concerned. Soggy wood pellets are sawdust in the making, Kirkland said. And there is a market for sawdust, he said. Livestock bedding is one of many uses, he said.

Kirkland arranged to have the former wood pellets shipped by the truckload to a site on his Diversified land on Glyndale off of U.S. 341. The sawdust is being stored in heaping piles out in the open.

While it no longer presents a fire threat, Kirkland said, Diversified keeps sprinkler systems aimed on the piles.

On Friday, the company began shipping the product to buyers.

“It’s already going back out,” he said. “It’s going to a couple of buyers.”

Brunswick Fire Chief Randy Mobley agrees the piles of former wood pellets no longer present a serious fire threat, particularly since the material is not being stored in an enclosed area. He has made regular weekly trips out to the storage location on Glyndale to check on the piles, he said.

Brunswick firefighters kept a 24/7 presence continuously at the scene of the warehouse fire until May 29, Mobley said. Firefighters were on-scene to control smoldering and flareups, as Logistec crews with front-end loaders sifted through the remains.

Trip Bailey, Logistec’s executive vice president of operations in Brunswick, said the product was handled “with the utmost care to ensure that is was removed safely.” Bailey said it is too soon to say whether the company will seek to rebuild the warehouse.

The fire is being investigated by the state fire marshal and the federal division of Alcohol, Tobacco, Firearms and Explosives. State Fire Marshal Craig Landolt told The News this week that its report on the fire will be released soon.

“The Safety Fire Division of the Insurance Commissioner’s Office is finalizing a report concerning this matter,” Landolt said in an email.

Added Mobley: “The state fire marshal’s office will decide if they can bring pellets back or not. And they will set the criteria for how it will be done, if they are allowed to bring it back.”

Brunswick firefighters and Logistec are no strangers to wood pellet fires.

In 2015, a wood pellet fire destroyed two 50,000-square-foot wood-frame warehouses at Logistec on Port of Brunswick property near Newcastle Street and 4th Avenue.

Brunswick firefighters fought smaller fires at the new warehouse in 2017, 2018 and on Easter 2019.