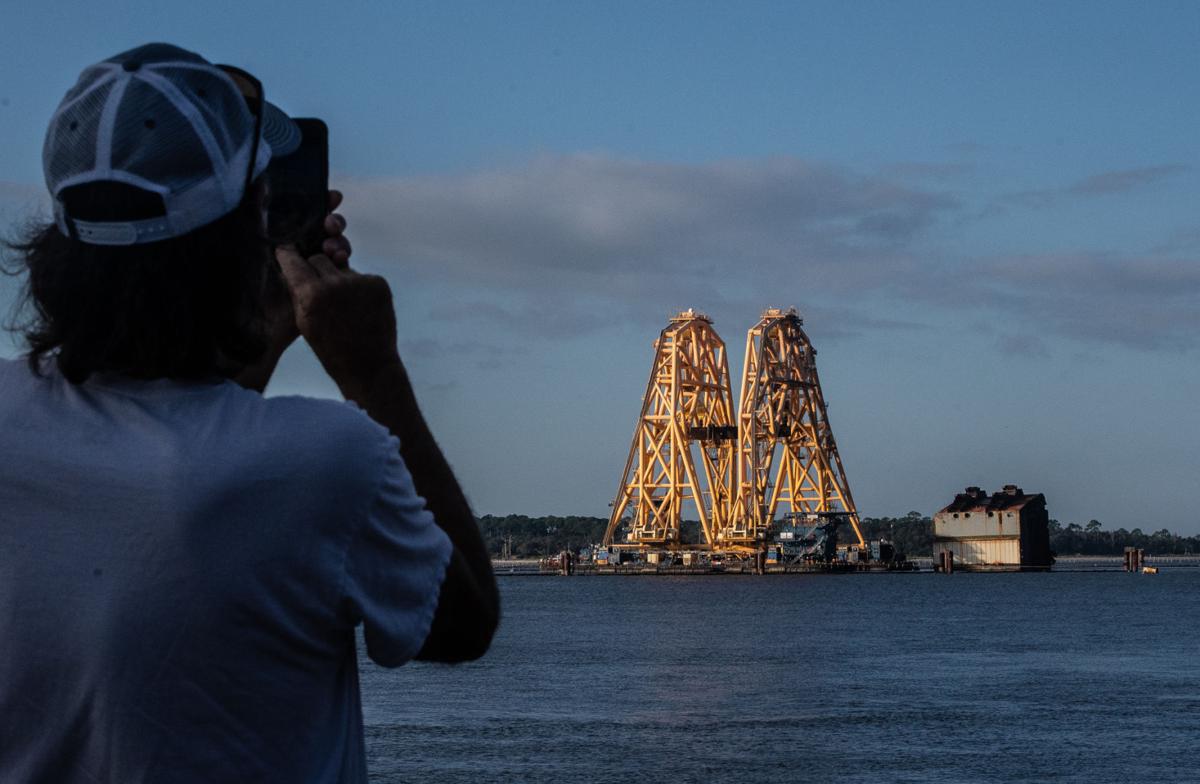 Larry LaDuke of Denver, Colorado, gets a shot of the last piece of the Golden Ray remaining in the sound before heading home. 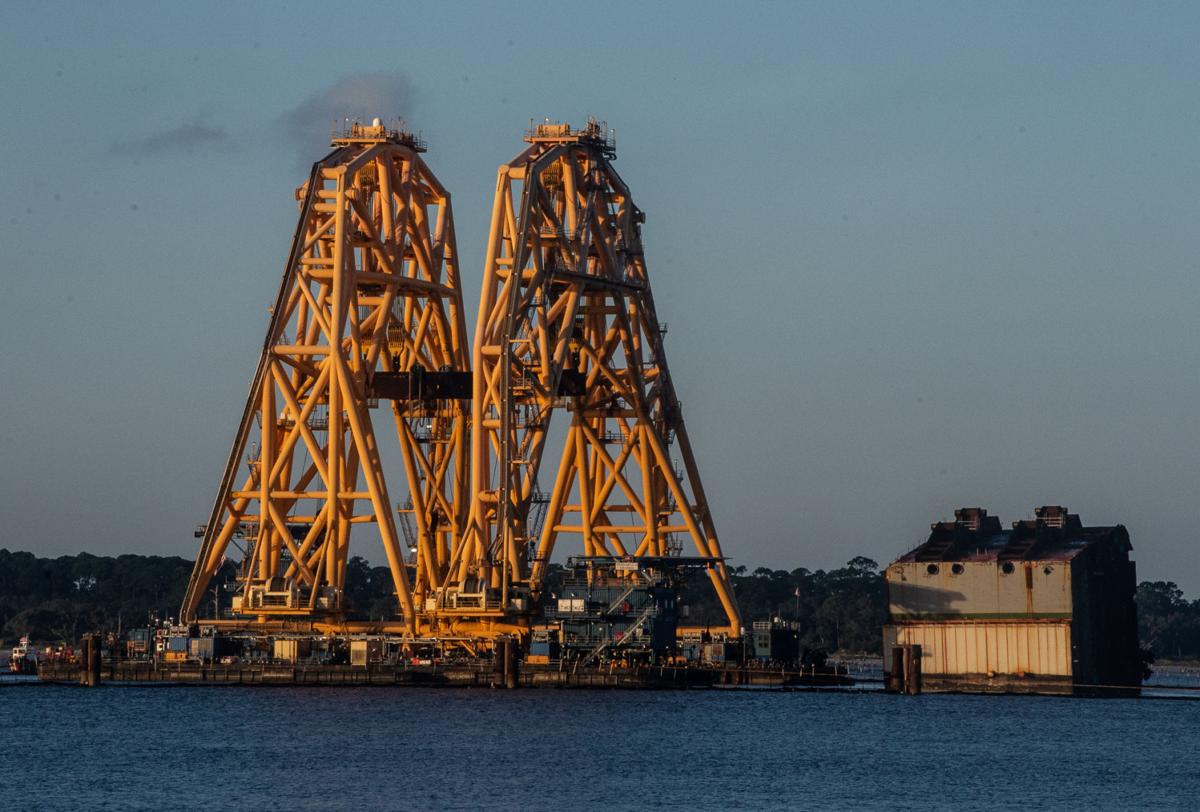 The last section of the Golden Ray rests in the sound as the VB 10,000 undergoes some work. 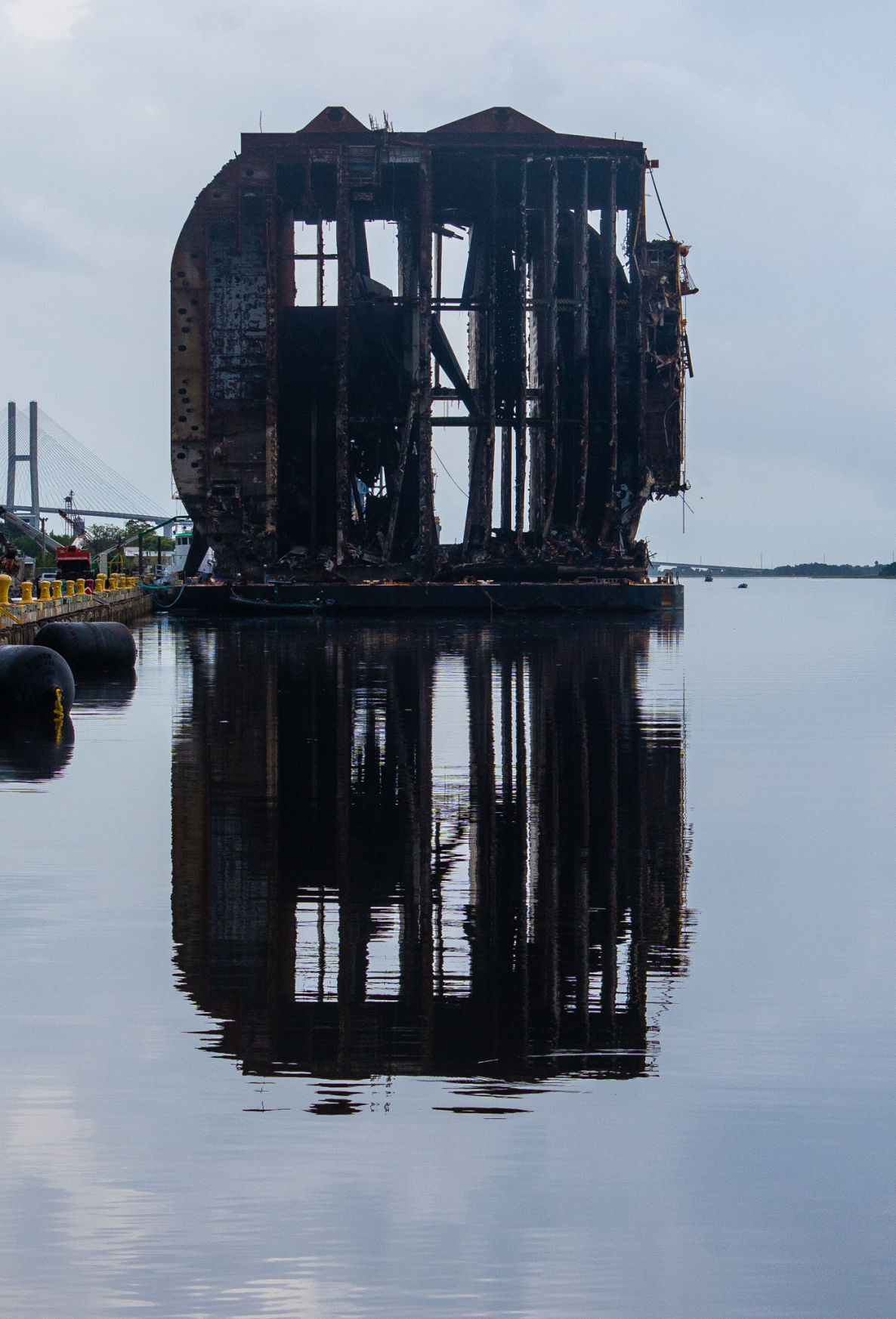 The Julie B is shown, with its cargo reflected in the water.

Larry LaDuke of Denver, Colorado, gets a shot of the last piece of the Golden Ray remaining in the sound before heading home.

The last section of the Golden Ray rests in the sound as the VB 10,000 undergoes some work.

The Julie B is shown, with its cargo reflected in the water.

The VB 10,000 crane vessel could hoist the final chunk of the shipwrecked Golden Ray out of the waters of the St. Simons Sound as early as this week, but that does not mean it is going anywhere anytime soon, according to Unified Command.

The VB 10,000 will lift the section out of the water to give the experts a first look at the section’s underside, which has been embedded in the sand for more than two years.

The engineers and salvage masters who are calling the shots in this pivotal last step fully expect to find significant damage, Himes said. The damage they detect will dictate the degree of refitting required to the receiving cradle on the deck of the dry dock barge that will eventually haul this last piece of ship wreckage from the sound, Himes said.

“The goal of the first lift is to allow the salvage master and the engineering team to assess the condition of the bottom of Section 4,” Himes said Monday. “But we’re expecting to make that lift sometime this week.”

In the meantime, the 255-foot-tall VB 10,000 is undergoing some routine maintenance after the heavy workout it received as the workhorse in the recent operation to load two shipwreck sections onto one barge. As part of the maintenance, the twin-hulled crane vessel moved across Section 4 over the weekend, moving from its west end to its east end. Section 4 is 80 feet long and weighs about 4,909 metric tons.

“Once the maintenance is completed, they will move into position over the section, attach the (lifting) grommets and prepare for the lift,” Himes said.

This final lift operation is apparently following the pattern of its predecessor, the heavily damaged Section 5. When it was lifted for the first time on Sept. 10, the experts learned that most of the hull plating on the submerged port side was missing.

Section 5 and Section 4 made up the Golden Ray’s midship. The two sections therefore incurred the brunt of impact when the 656-foot-long ship capsized on its port side Sept. 8, 2019, while heading out to sea with a cargo of 4,161 vehicles.

Once Section 4 is lifted, it will remain suspended while work is conducted to prepare the steel-girded cradle on the dry dock barge.

Section 4 and Section 5 both will be docked at a site off of Bay Street on the East River, where each will be dismantled into smaller sections for transport by barge to the Modern American Recycling Services facility in Gibson, La.

Section 3 and Section 6 of the shipwreck are presently being sea-fastened to the deck of the barge Julie B. Guided by tugboats, the Julie B will transport both simultaneously to MARS.

“It’s going to be a couple of weeks because the Julie B needs to have both sections secured for an ocean transit and then be inspected for safety,” Himes said. “Once we’re cleared for departure and we’re given a favorable weather window, sections 3 and 6 will depart and you will never see them again.”

Salvors commenced in November with a plan to employ the VB 10,000 to cut the Golden Ray into eight sections for removal from the sound.