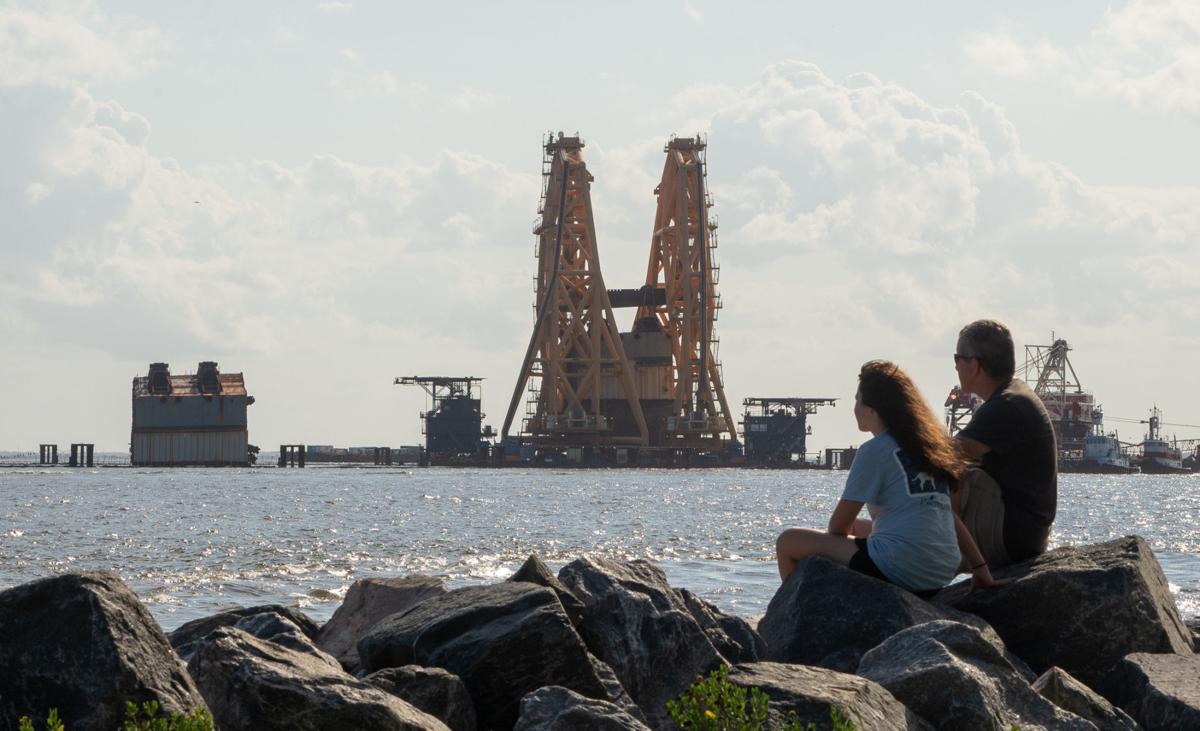 A couple of folks sit on the rocks at the lighthouse with the two remaining of the Golden Ray in front of them. Pretty soon, the ship will be gone from the sound. 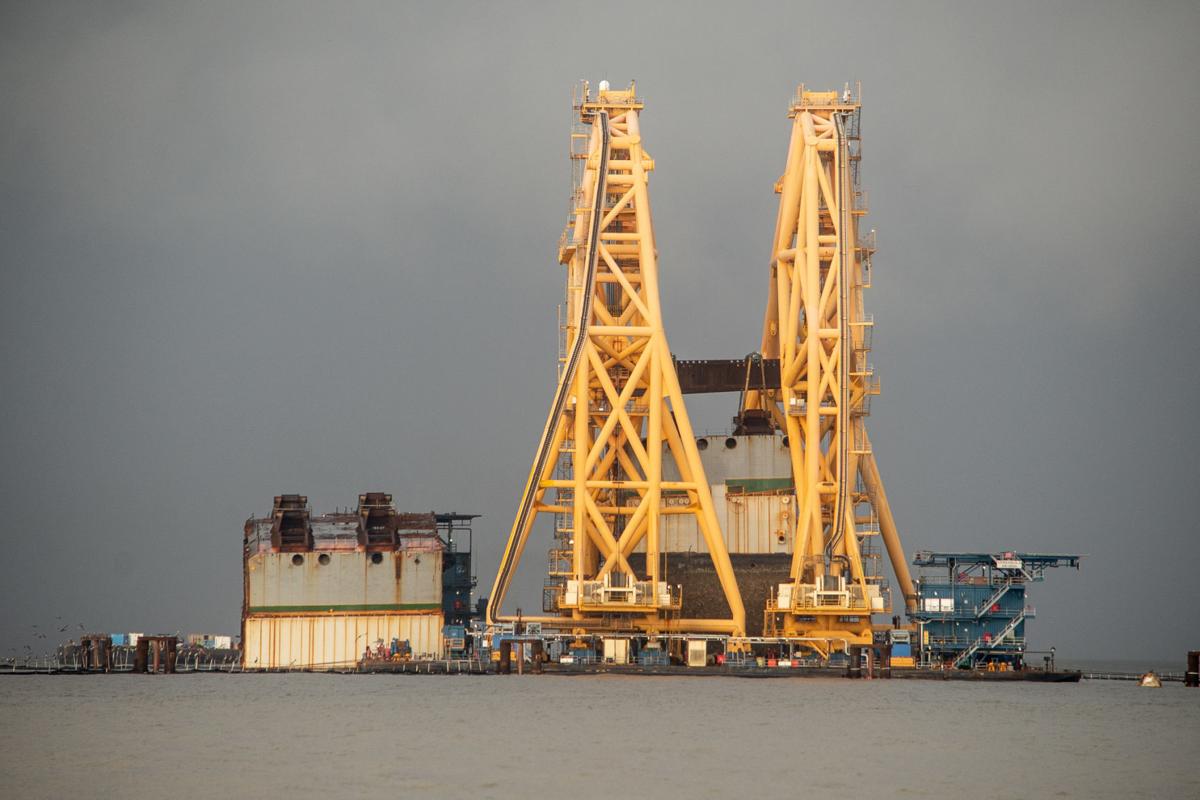 The VB 10000 lifts one of the two remaining sections of the Golden Ray at 8 a.m. Sunday morning after the final cut was completed. 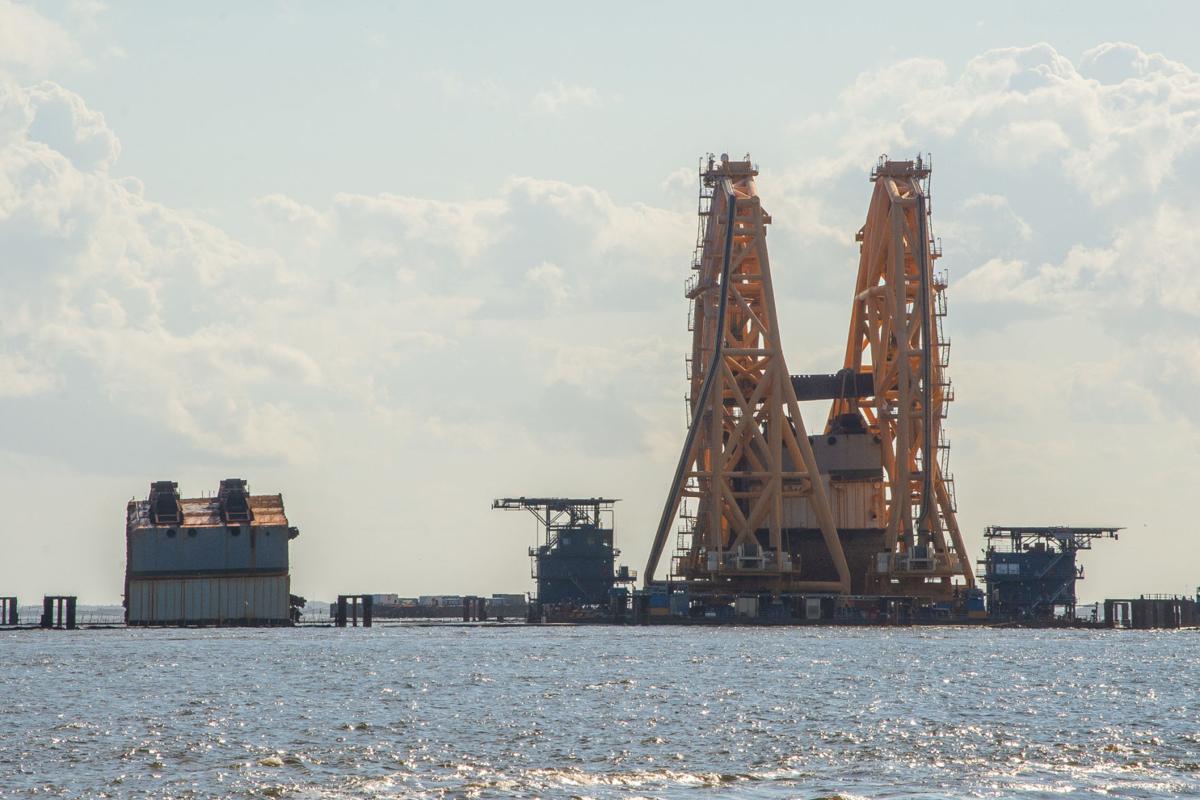 A couple of folks sit on the rocks at the lighthouse with the two remaining of the Golden Ray in front of them. Pretty soon, the ship will be gone from the sound.

The VB 10000 lifts one of the two remaining sections of the Golden Ray at 8 a.m. Sunday morning after the final cut was completed.

The final cut is done.

The VB 10,000 crane vessel and the cutting chain it powered tore through the last remains of steel connecting what is left of the shipwrecked Golden Ray in the St. Simons Sound into two sections just before midnight Saturday, said U.S. Coast Guardsman Michael Himes, spokesman for Unified Command.

After sunrise Sunday, Section 5 of the shipwreck hung suspended in the rafters of the 255-foot-tall VB 10,000. The crane vessel and the 74-foot-long, 3,800-metric-ton Section 5 moved a short distance from the half-submerged Section 4 of the shipwreck at about 8 a.m. There they will remain until a dry dock barge arrives to slide in between the twin hulls of the crane vessel to have Section 5 lowered onto its deck for transport out of the sound.

That is not likely to happen until at least Monday, during a slack high tide when conditions are most favorable for the transfer, Himes said. High tide in the St. Simons Sound occurs at 8:13 a.m. Monday and again at 8:32 p.m. The crane barge has a specially designed cradle on its deck to accept the section. Welders will then secure the section to its deck. The dry dock barge and its cargo will be towed inland to moor on the Turtle River to await dismantling at a site on Bay Street in Brunswick off of the East River.

Light fuel sheens have been detected inside the 1-mile perimeter environmental protection barrier (EPB) that surrounds the salvage site in the waters between the resort islands of Jekyll and St. Simons, Himes said. However, there is no sign of more substantial oil leaks, such as the one that marred the completed separation of Section 3 when a river of oil escaped the EPB on July 31 and fouled beaches, Johnson rocks and marsh habitat on the south end of St. Simons Island, Himes said.

A flotilla of oil pollution cleanup boats remains on standby in the waters, positioning with the tidal movements in case of a large leak, Himes said.

“There are only very light oil sheens inside and around the barrier, no rainbow sheens or thick oil,” Himes said. “We have several boats holding station around the barrier depending on the flow of the tide, ready to recover or mitigate any discharges or debris.”

It has been nearly two years since the 656-foot-long Golden Ray overturned Sept. 8, 2019, in the waters between Jekyll and St. Simons islands while heading to sea with a cargo of 4,200 vehicles. Sunday’s feat marked the last of seven cuts to separate the massive steel carcass into eight sections for removal. Cutting into the shipwreck began 10 months ago in November.

The barge Julie B is presently in route from the Gulf of Mexico to accept Section 4 of the shipwreck, Himes said. Julie B is the largest barge operating in U.S. waters, stretching to 400 feet. It could possibly transport Section 4 whole to the Modern American Recycling Services facility in Louisiana, Himes said.

The Julie B was used to haul the bow section (Section 1) of the Golden Ray late last year and again to haul Section 2 when it was separated in March.

Tentatively, all four middle sections of the shipwreck are scheduled to be dismantled into smaller sections at the Bay Street site, for transport to MARS’s headquarters in Gibson, La. The four outer sections of the shipwreck all have been transported whole directly to hole to MARS. Sections 6 and 3 are docked on the East River at the Bay Street site, where crews have begun removing vehicles and possible hazardous materials in advance of the dismantling operations.

Salvage engineers have determined the middle sections bore the brunt of any structural damage when the Golden Ray capsized on its port side and might therefor be too unstable for transporting whole.

The final cut began Aug. 23 and was completed in 12 days. Cuts have taken anywhere between eight days and eight weeks.