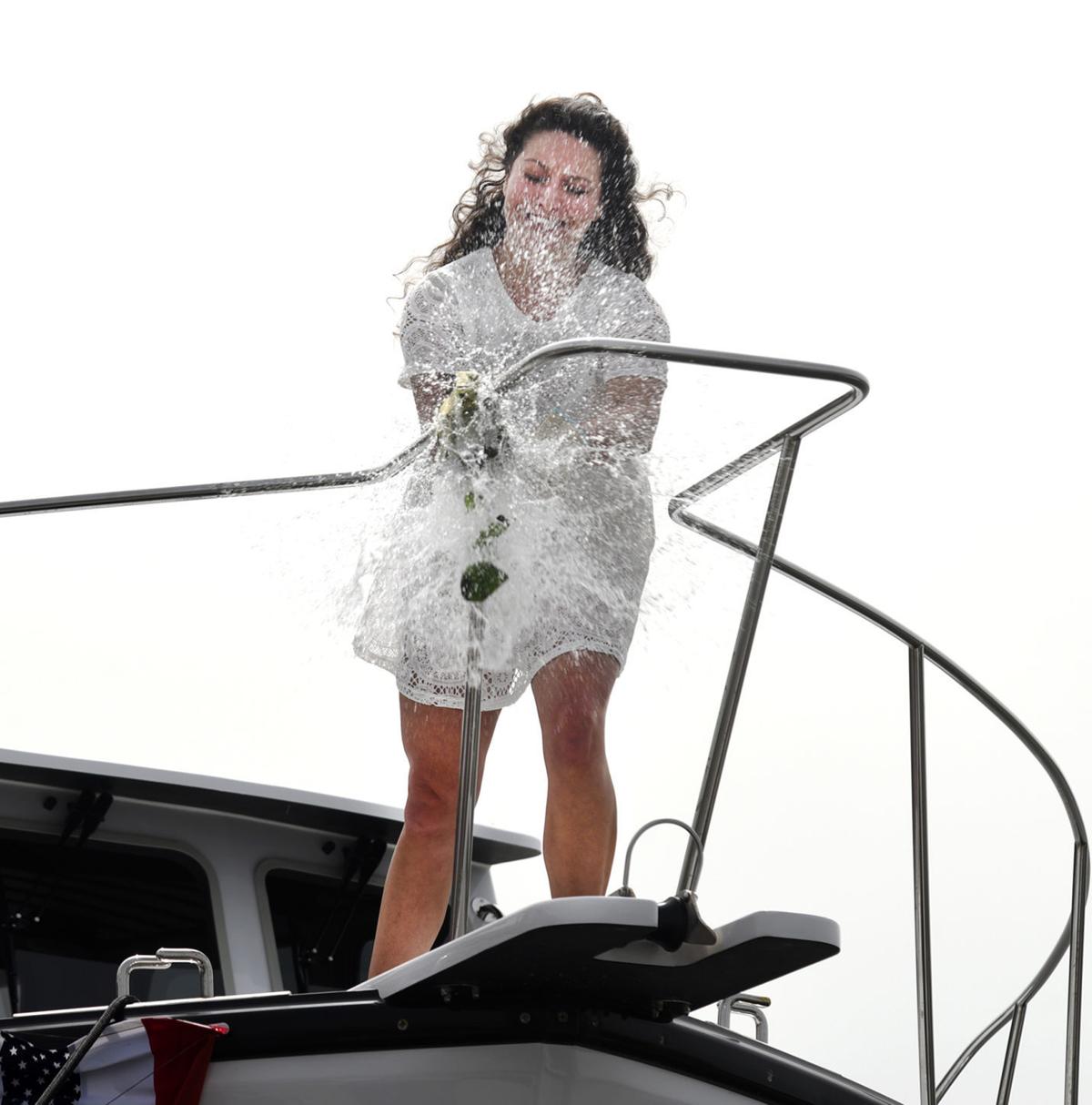 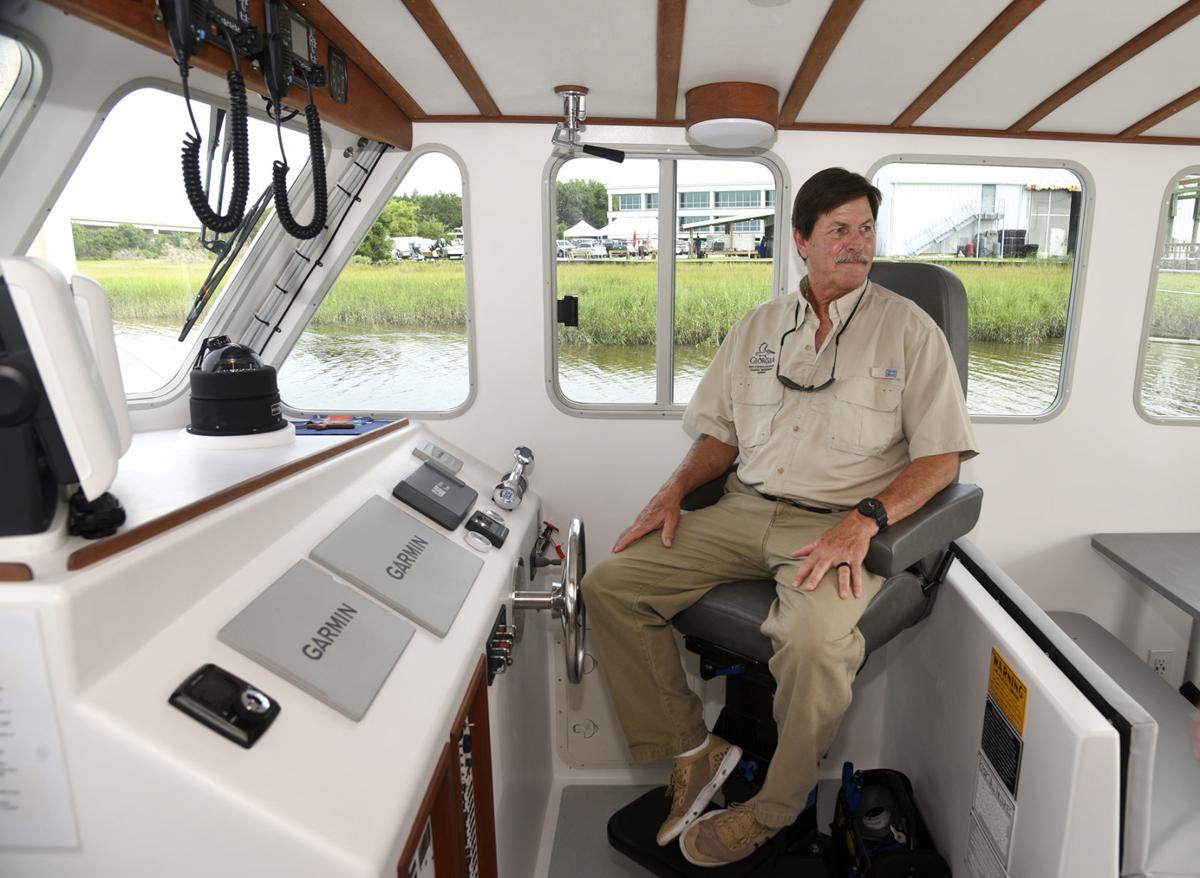 Department of Natural Resources boat captain Rusty Flournoy sits in the control room of the R/V Reid W. Harris which was christened Friday. Flournoy, who captained the R/V Anna for years, will captain the new vessel. 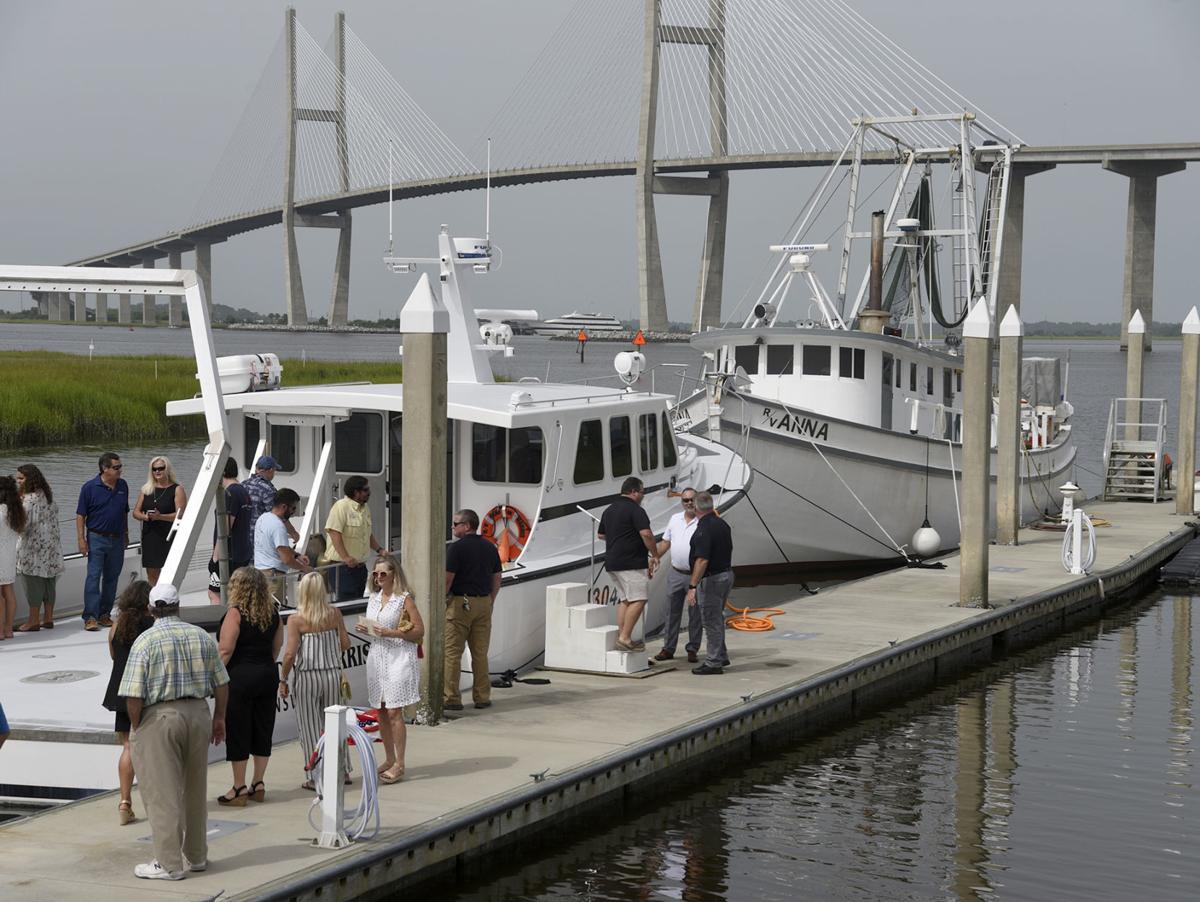 Guests check out the new Department of Natural Resources research vessel, the R/V Reid W. Harris during a christening ceremony Friday. The new boat will replace the R/V Anna, which has served the DNR for 50 years.

Department of Natural Resources boat captain Rusty Flournoy sits in the control room of the R/V Reid W. Harris which was christened Friday. Flournoy, who captained the R/V Anna for years, will captain the new vessel.

Guests check out the new Department of Natural Resources research vessel, the R/V Reid W. Harris during a christening ceremony Friday. The new boat will replace the R/V Anna, which has served the DNR for 50 years.

The champion of Georgia’s treasured marshlands will once again keep careful watch over this pristine ecosystem, if only in spirit.

Several dozen folks turned out Friday morning at the state Department of Natural Resources’ docks In Brunswick for the christening of the R/V Reid W. Harris, the new research vessel that will take the lead in monitoring and protecting the region’s most vital resource.

A native son of the Golden Isles, Reid Harris fought for two years as a state representative in Atlanta to see the Coastal Marshland Protection Act become reality. At the time, phosphate mining and housing tracts were very real possible alternatives to the natural beauty the community enjoys today in the salt marshes and estuaries.

It was Harris who pushed the bill through the state House, Senate and governor’s office to make the Coastal Marshland Protection Act a reality in March 1970.

Georgia DNR Commissioner Mark Williams told the crowd who gathered for the occasion that it was only fitting the state agency honor the research vessel with Harris’ name. It also was a worthy tribute to Harris during the 50th anniversary of the Coastal Protection Act.

“It is important, it is more than appropriate, to christen this beautiful vessel that will watch over Georgia’s estuaries in honor of Rep. Harris,” Williams said. “From the Savannah River to the St. Marys, the R/V Reid Harris will monitor 36 sites each month, conducting timed trawls at each site. We have no doubt that the R/V Harris will serve this state and her crew well, and provide a seaworthy and able platform to complete the DNR’s mission of sustaining, enhancing, protecting and conserving Georgia’s natural resources for the next 50 years and beyond.”

The R/V Reid Harris replaces the R/V Anna, which served the DNR for 50 years. Built locally on the MacKay River by brothers Johnny and Howard Wilson, the Anna plied the waters initially as a commercial shrimper before going into service for the DNR in 1970.

Wesmac Custom Boats in Surry, Maine, built the R/V Reid Harris. The vessel is 54 feet long with a 17 1/2 foot beam and a 6 foot draft. With its 1,000 hp Caterpillar engine, the vessel is capable of cruising at more than 16 knots or roughly 18 mph. The DNR acquired the R/V Reid Harris for $1.5 million, paid for through a 2016 bond appropriation. There are accommodations in the cabin for its crew of four.

Like the Anna, the DNR’s new vessel is primarily a trawler, similar in function to the many commercial shrimp boats that trawl the ocean. However, it is the R/V Reid Harris and its crew of marine biologists who will decide when those commercial fishermen can begin harvesting Georgia shrimp each year. The DNR makes 15-minute trawls in 36 monitoring stations in Georgia waters — from the beach three miles out — gauging the maturity of the shrimp population to determine when that population can safely sustain a responsible harvest. This season’s commercial shrimp harvest started June 10. Likewise, the DNR conducts experimental trawls in the winter to determine when it is prudent to discontinue the shrimping season.

Additionally, biologists onboard document and track all the marine by-catch caught in the net before returning it safely to the water, said DNR Capt. Rusty Flournoy, who captained the Anna 36 years. This helps monitor the ecosystem’s overall environmental health, including blue crabs, sport fish and myriad other fin fish and marine critters.

The son of Reid Harris, Reid Harris Jr., spoke of the importance of the salt marsh and accompanying estuaries as a nursery that sustains a vast array of inshore and offshore marine life.

“I hope everybody realizes how important these resources are,” Harris said. “We have a third of the marshland on the East Coast. It’s what feeds the baby shrimp, baby crabs and supports the whole ecosystem up to 50 miles offshore. The reason we are the calving grounds for the North Atlantic right whale, and for the great manta ray, outside of all the other little creatures, is because of the marsh. My father recognized how important these resources are.”

The christening was performed with gusto and enthusiasm by granddaughter Betsy Harris. Barefoot and donning a white dress, the 23-year-old smacked the champagne bottle soundly across the bow railing, sending its contents flowing. A shard of champagne glass drew blood above her left big toe, but it was nothing a simple Band-Aid couldn’t remedy.

“Granddad did a lot more work than I did, so I’ll take it,” Betsy Harris said of the minor cut.