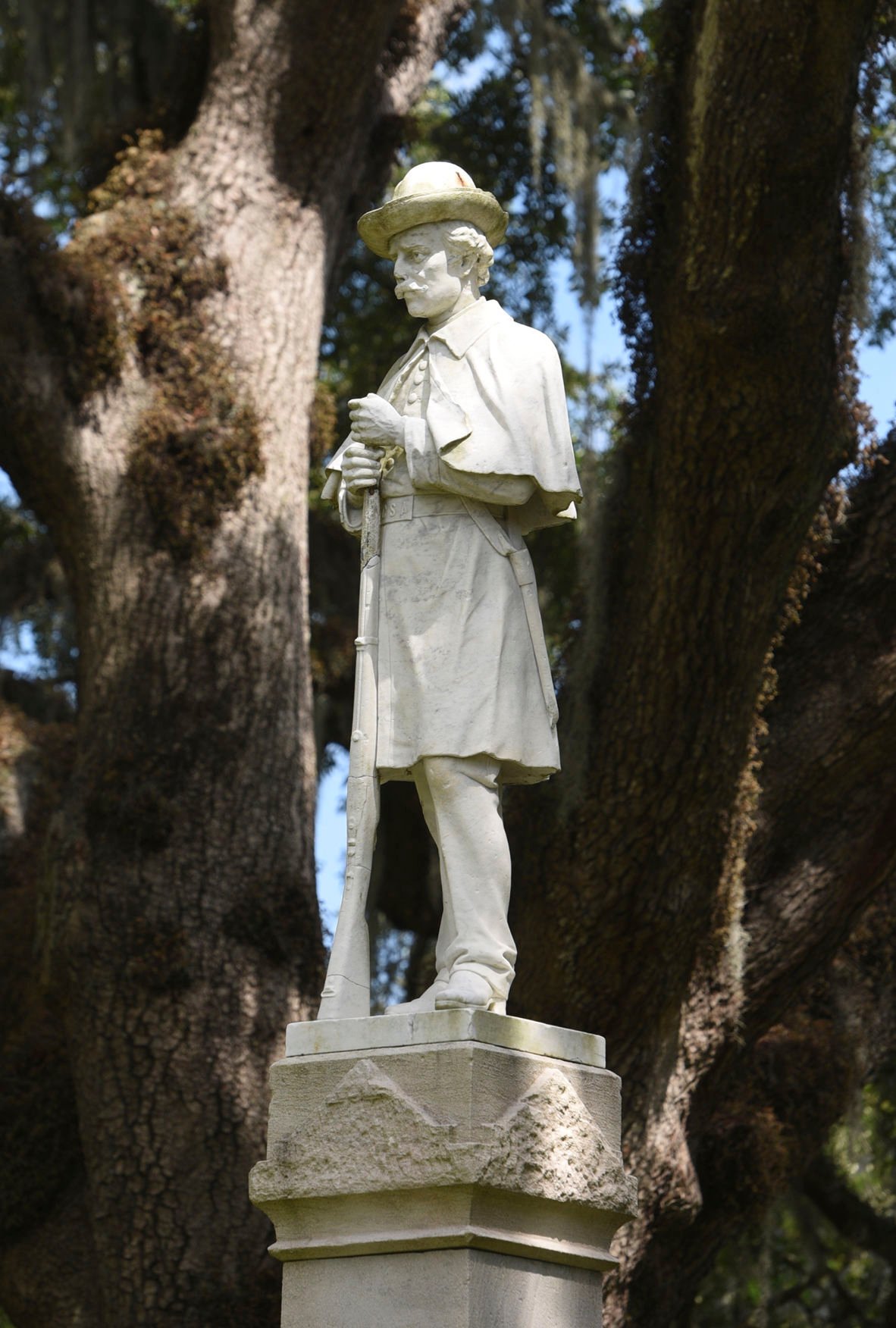 A statue of a soldier sits atop a Confederate monument located in Hanover Square in Brunswick. 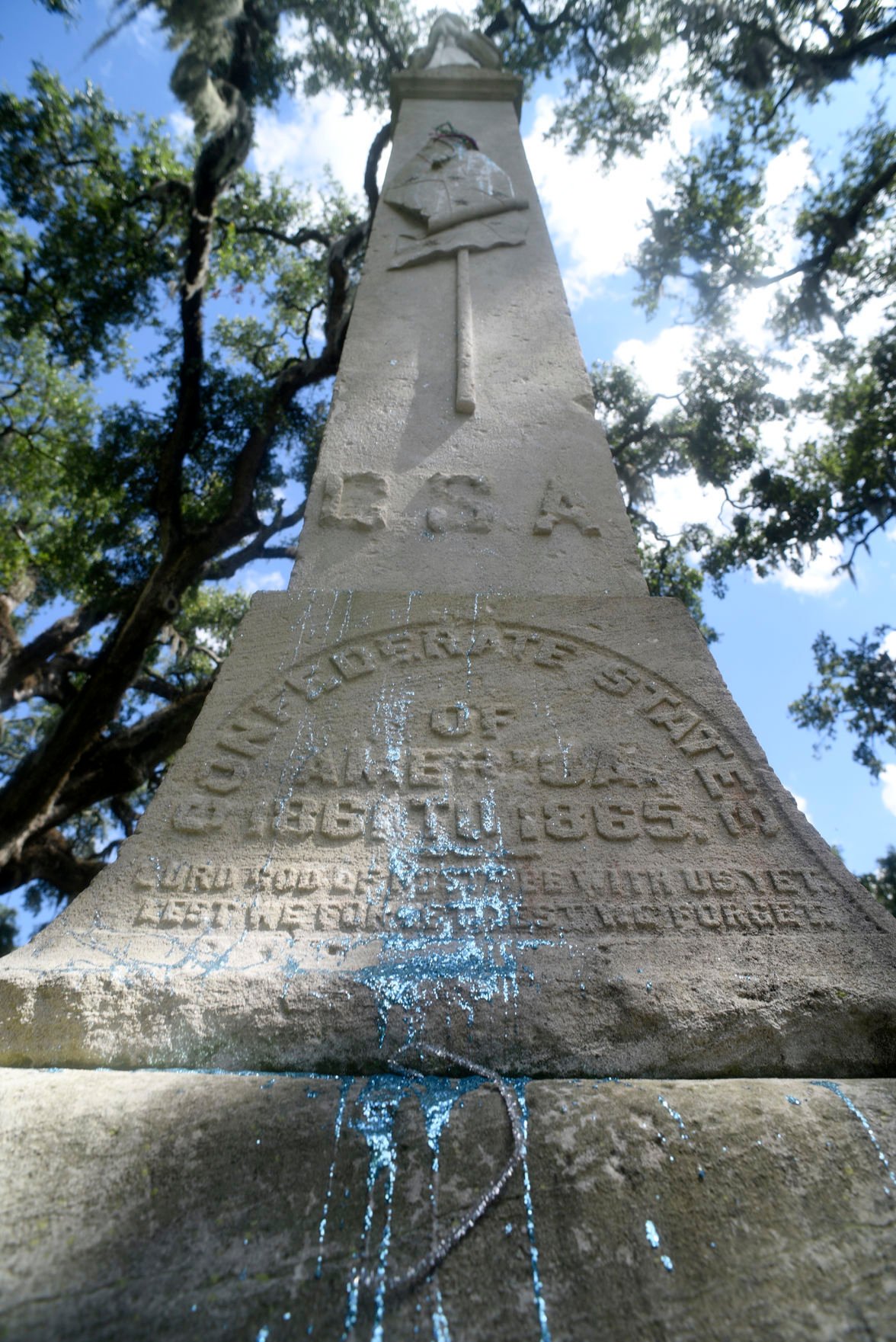 A statue of a soldier sits atop a Confederate monument located in Hanover Square in Brunswick.

One potential reason for the differing opinions about the monument can be attributed to schools teaching conflicting versions of the 1860s war. The version taught may depend on where one attended school, those involved in the monument debate say.

Brunswick Mayor Cornell Harvey said he attended all Black schools until his senior year of high school. His African-American teachers taught him the Civil War was about freeing slaves.

Many White students the same age were taught the war was a conflict over state’s rights.

“White students were taught about the ‘lost cause’ here in Brunswick,” Harvey said. “I was taught about all the contributions Blacks made to this country, and it wasn’t taught in other public schools.”

When the monument was erected in 1902, Blacks were not asked for input. And most would not have dared to say anything disparaging about it out of fear.

“No Blacks had a say so. I grew up with that,” Harvey said.

The difference in the way curriculum about the war was taught goes back to the turn of the 20th century when the monuments and school curriculum were created to explain the “lost cause” version of the Civil War, said Chris Wilhelm, a history professor at the College of Coastal Georgia and a member of a committee created to make a recommendation about the future of the park monument.

“The United Daughters of the Confederacy, who established many of these monuments (though not Brunswick’s), also spent a lot of time writing textbooks and running for school board to change curriculum,” Wilhelm said. “I think one divide on the committee I served on was generational — older members subscribed to the ‘lost cause’ version of the Civil War, which they undoubtedly received in school, while younger members who went to school after integration got a more accurate view of the Civil War.”

Wilhelm said the message conveyed in the inscription in the base of the monument shows the generational divide people have about the war and monuments.

“People don’t realize how political history can become,” he said. “As historians, we look at the sources. We look at the facts, what people said and wrote at the time.”

Wilhelm said the most important period of Southern history was how the aftermath of the Civil War was conducted.

As an historian, Wilhelm said one of the unique aspects of monuments is the large number erected in the South and other areas. Typically, the losers of wars don’t get the opportunity to erect monuments in other countries, he said

“I don’t know of anything like this,” Wilhelm said. “This is such an aberration, just how these commemorate losing the war by taking a loss and turning it into an advantage. It’s a real sad attempt to turn this into a moral history.”

Wilhelm said the issue surrounding the monument has become a political “hot potato” with no ending that will make everyone happy.

“No matter what you do, it will upset a bunch of people,” he said. “You’ve got a lot of people who got one version of history. It’s really hard for people to reconsider what they’ve known their whole lives.”

With the ongoing debate over the monument, the time is right to reach a decision on what to do, he said. If it isn’t made now, Wilhelm said it may never be resolved.

“To me, it’s totally wrong,” he said. “I find the inscription offensive. These are not Southern problems. They’re American problems.”

Regardless whether the monument stays or is relocated, Wilhelm said a marker needs to be erected to explain the inscription on the monument’s base describing the war as an “unconstitutional invasion” against states that legally tried to secede from the Union.

“You need to contextualize it,” he said. “This is bad history.”