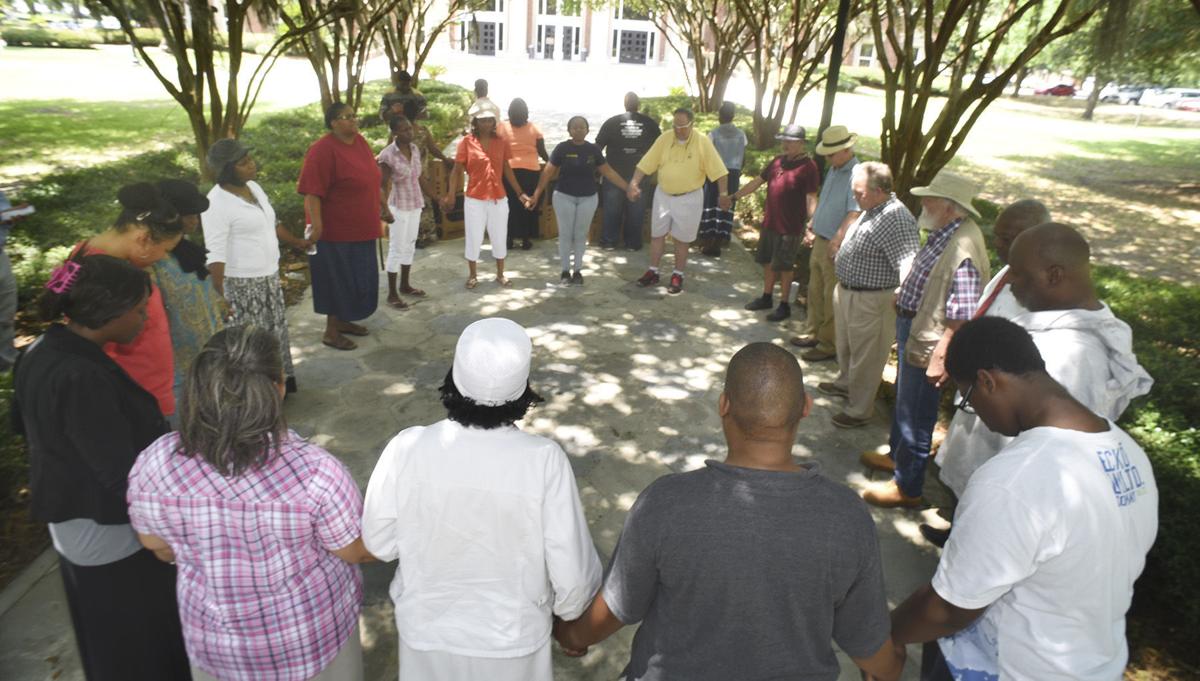 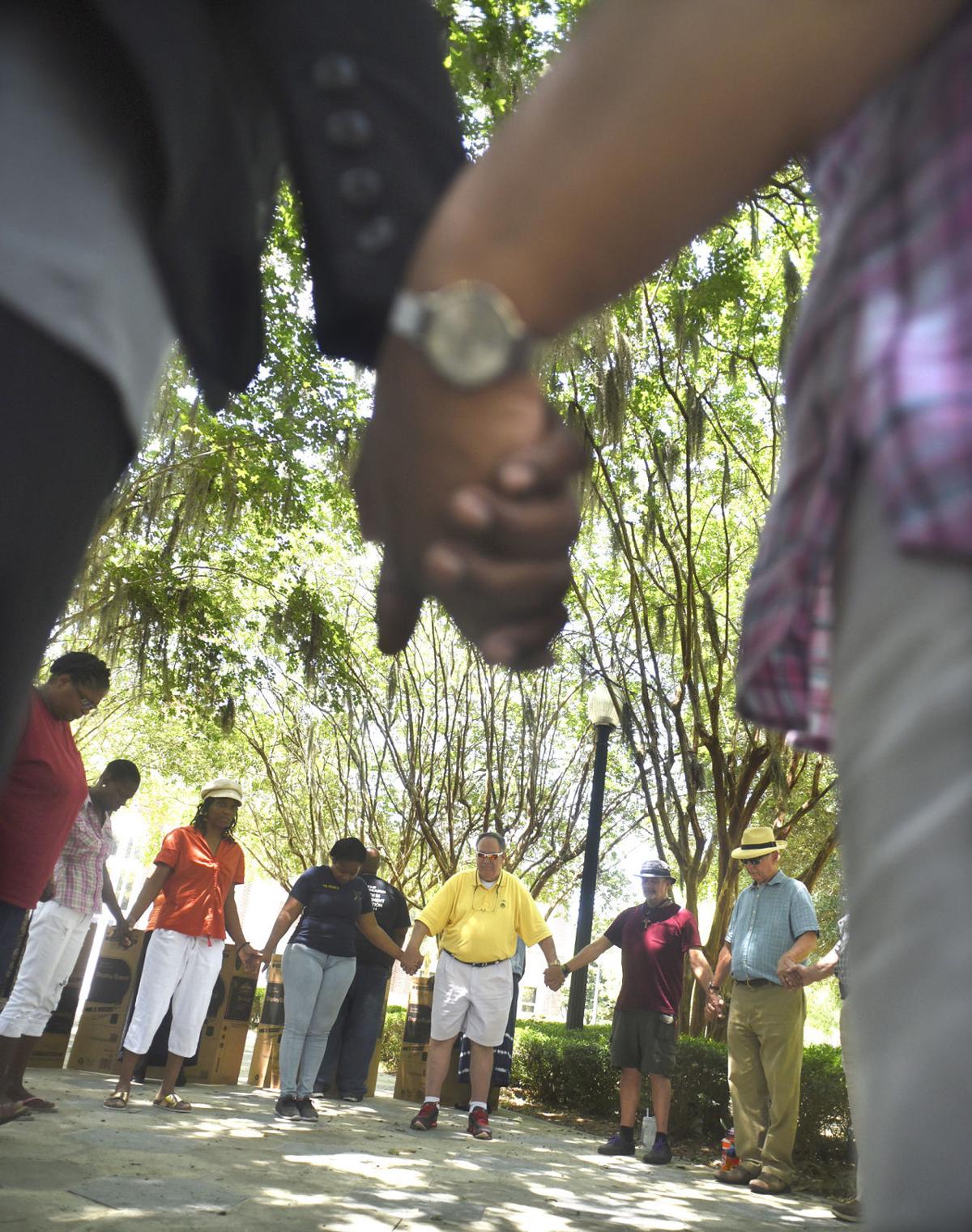 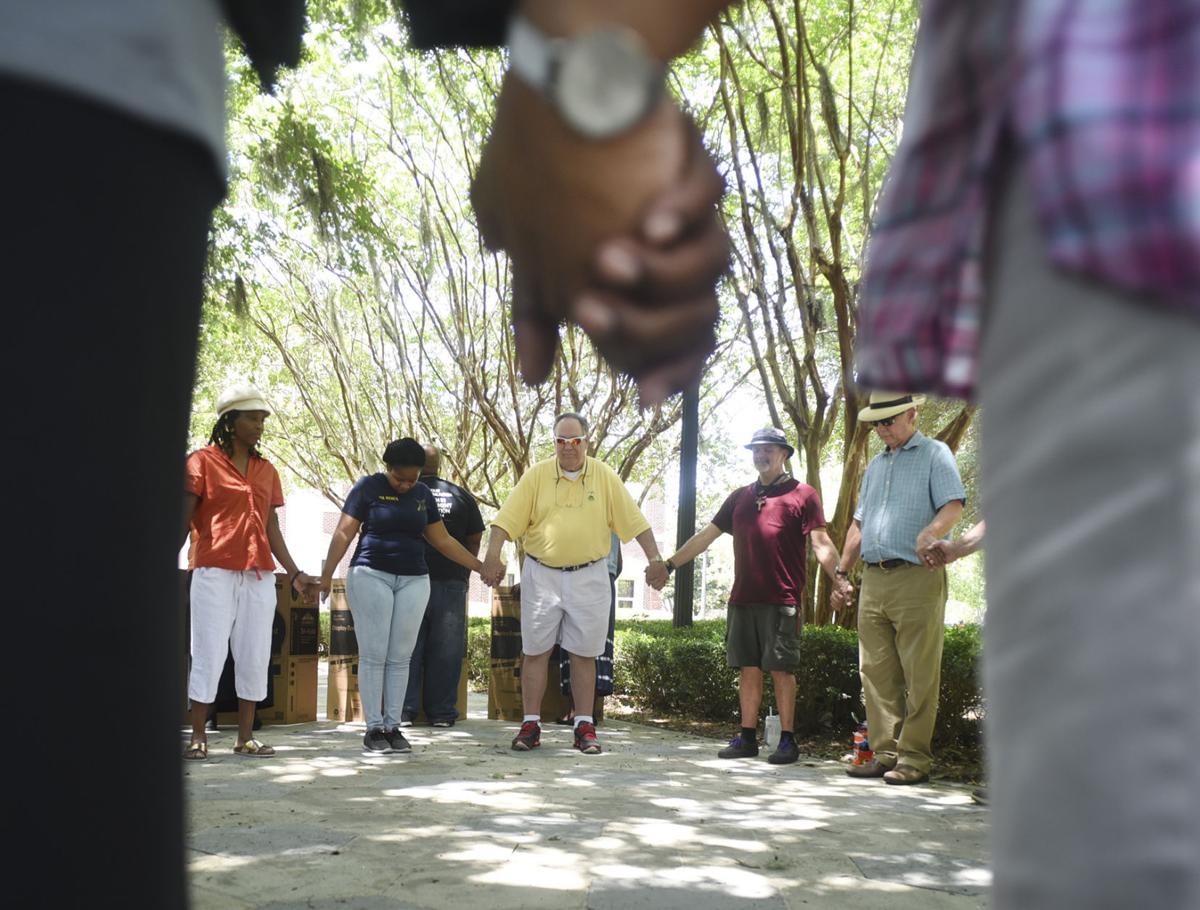 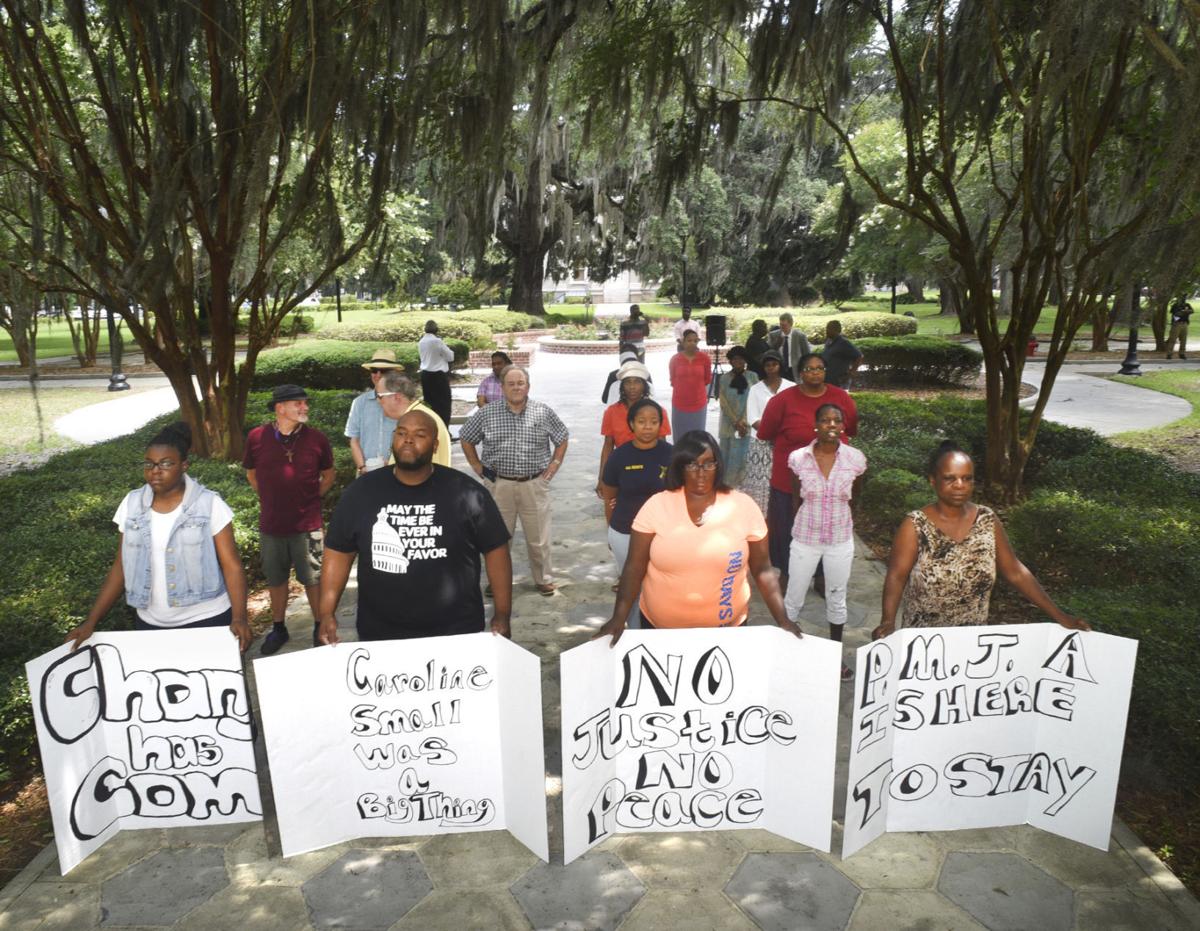 More than two dozen protesters gathered outside the Glynn County Courthouse in the sweltering midday heat Friday afternoon, calling for a new investigation into the 2010 fatal shooting of Caroline Small by two Glynn County police officers.

The demonstrators arrived at the courthouse in a motorcade of a dozen vehicles, escorted by a Brunswick police patrol car. They were led by Crayton Cowart, founder of the Poor Minority Justice Association and pastor of the Church of God Bibleway at 1601 Albany St. in Brunswick. Most of those on hand were Bibleway parishioners, who came from as far away as Lakeland, Fla., and Winter Haven, Fla., home of Cowart’s previous congregation.

But they were joined by two members of the grassroots group, Justice For Caroline Small, who made the trip over from Tallahassee to join the protest. Local activists joined the demonstration as well, including Brunswick resident Jeff Kilgore and Kevin Gough, the recently fired Glynn County Public Defender.

“This is not about black or white — this is about right,” said Cowart, who established a Bibleway church in April at the old Roxy Theatre building on Albany Street. “We have an opportunity here in Brunswick to show the world, to make a difference and make an example of how you hold people accountable. We’re not saying that law enforcement is always wrong; we’re saying the law enforcement is not always right. Those who are upholding the law should uphold the law.”

Small, 35, died after two county police officers shot her several times at the end of a 20-minute low speed chase on June 18, 2010, which ended with her Buick Century hemmed in between two patrol cars and a utility pole. Officers Robert Sasser and Todd Simpson shot eight times into the front windshield after Small continued to rock the car back and forth on flat tires, ignoring warnings to cease.

The mother of two struggled with a long history of drug addiction and mental illness.

Officer Simpson passed away in March after a lengthy battle with cancer.

A grand jury did not pursue prosecution after District Attorney Jackie Johnson presented evidence in the case in August of 2011. In a subsequent civil suit, the U.S. District Court of Appeals upheld a ruling by a local federal judge that the shooting was “unnecessary” but was not a violation of Small’s constitutional rights.

However, allegations raised last year about possible evidence withheld from the grand jury have prompted many to call for a new investigation into the Small shooting. Foremost is Justice For Caroline Small, the group formed by members of the Presbyterian Church near Tallahassee where Small attended as a child with her mom, Karen McGeehee.

“We heard that this group was going to demonstrate for Caroline and we just wanted to be here to show our support,” said Justice For Caroline Small member Bob Apgar, who made the trip from Tallahassee with Wayne McDaniel. “We just sat with them earlier at their church and told them a little about Caroline. Her story really resonates with people.”

Admittedly, not everyone in the demonstration was versed in the case of Caroline Small. Many were Bibleway members who were devoted to Cowart and committed to the cause of the Poor Minority Justice Association. “I’m from Florida, so I don’t know anything about the situation,” said one man, who stood stalwart with a poster board protest sign. “I’m just here to support Crayton Cowart.”

The man’s sign read, “Caroline Small Was A Big Thing.” Other signs included “PMJA Is Here To Stay” and “No Justice No Peace.” The group gathered in the shaded courtyard between the Old Courthouse building on G Street and the new courthouse at 701 H Street. At one point they held hands and formed an emotionally-charged prayer circle. Keyboard player Ivan Shumate and a singer proved soulful gospel throughout the one-hour demonstration.

Ruby Wooden arrived from Statesboro, unaware of the details behind the Small case until she arrived. “From what I heard this morning, I think it was wrong,” Wooden said. “I thought it was unnecessary.”

Gough was looking gaunt, having dropped from 214 pounds to 187 pounds since beginning a hunger strike in support of the local NAACP’s call for investigation into the district attorney’s Office.

“I’m just here to show my support for PMJA and Pastor Cowart and other pastors in this community who are fighting for justice,” said Gough, who is taking only water and 50 supplemental calories a day.

The justice group will conduct a march through Brunswick streets Saturday, in support of Small and others who Cowart believes may have been marginalized by the justice system. It obtained a city permit for both demonstrations. Ultimately, Cowart would like to see a new investigation of Small’s shooting and an investigation into whether evidence was withheld from the original grand jury.

“I want to see this case presented directly in front of a grand jury so that justice can be served,” he said. “And then we need to do an investigation on why it was not presented correctly from the beginning. Let’s be known as the and county that berthed justice from injustice.”

Reporter Larry Hobbs writes about government, public safety and other local topics. Contact him at lhobbs@thebrunswick news.com or 265-8320, ext. 320.

The death of Caroline Small

On June 18, 2010 Caroline Small was shot by two Glynn County police officers after a 30-minute pursuit that started in a Glynn Place Mall park…

Millions of dollars for maintenance for federal lands and historic sites may soon be headed for Georgia’s coast.

The show must go on.

A bigger than ever First Friday is a certainty when the monthly celebration springs to life Friday, the eve of the nation’s 244th birthday, in downtown Brunswick.

The VB 10,000 will arrive in the Golden Isles to cut up and haul off the shipwrecked Golden Ray as early as the middle of next week.