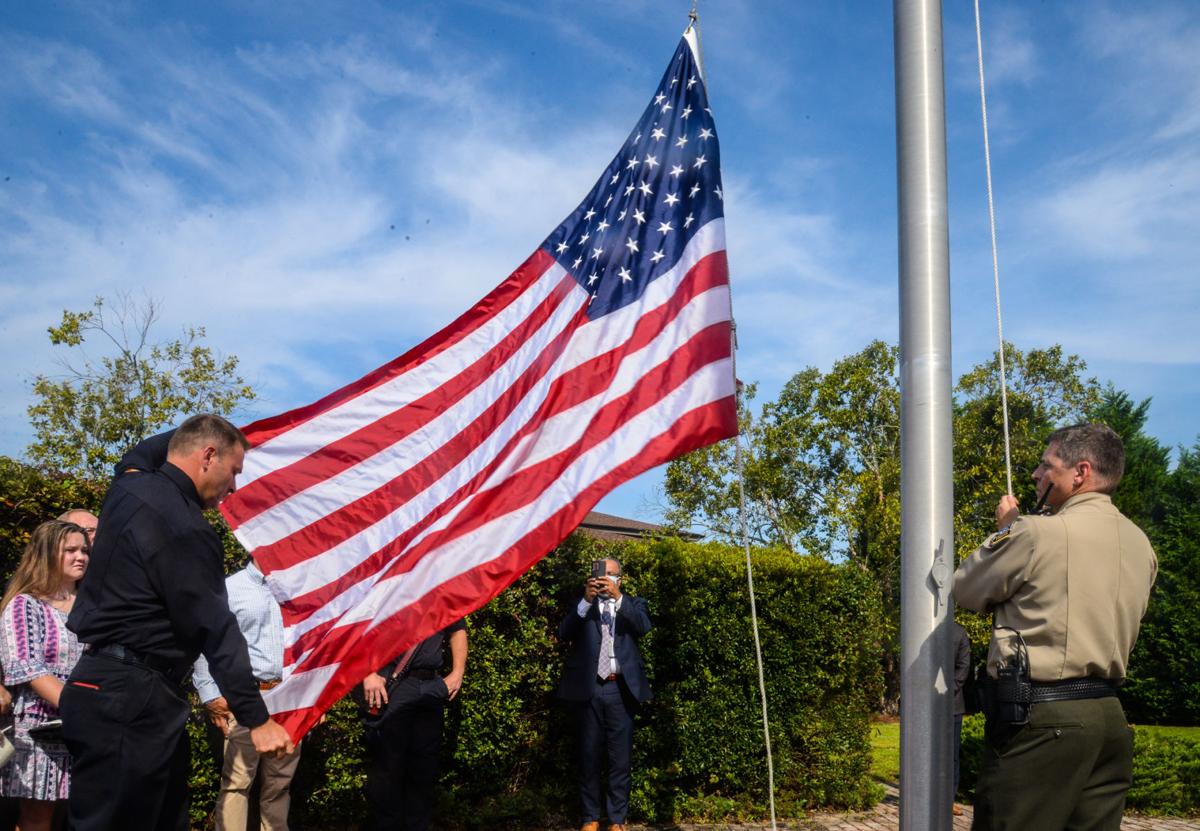 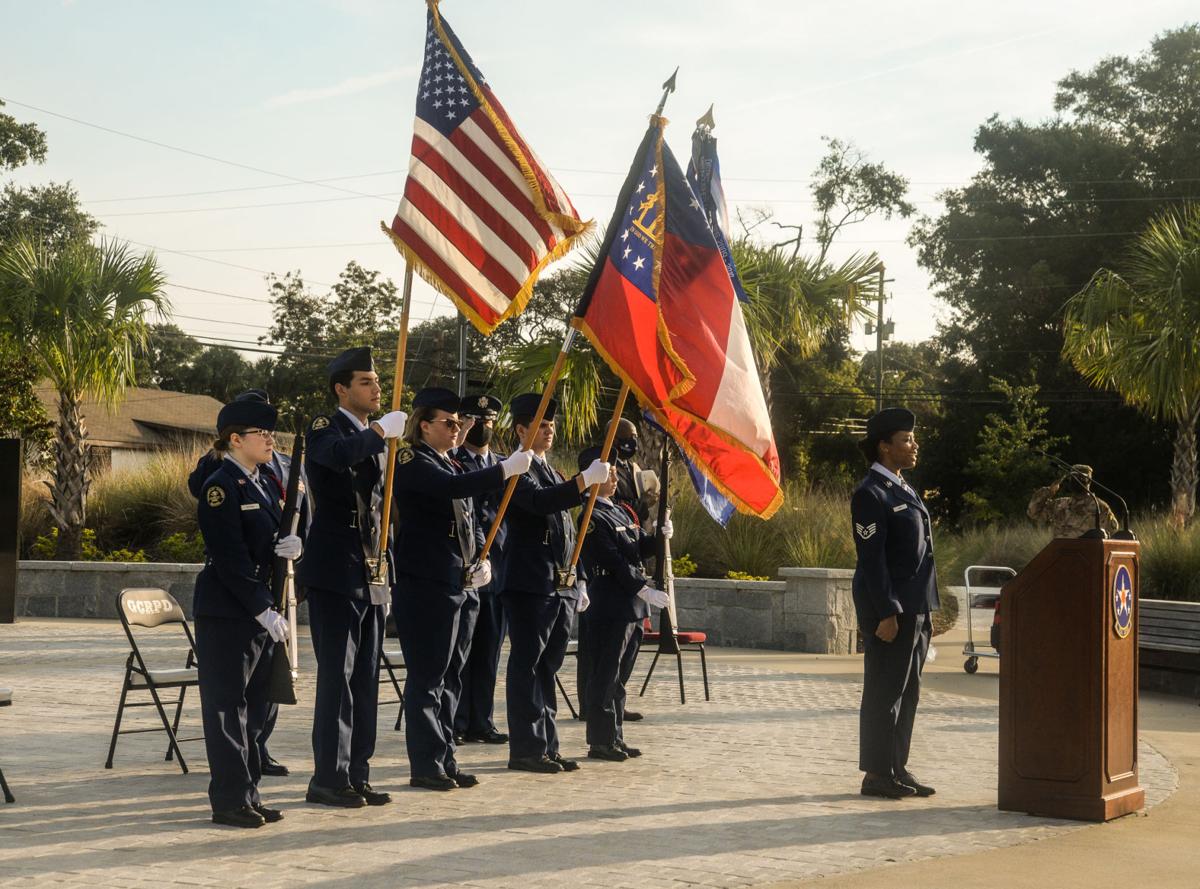 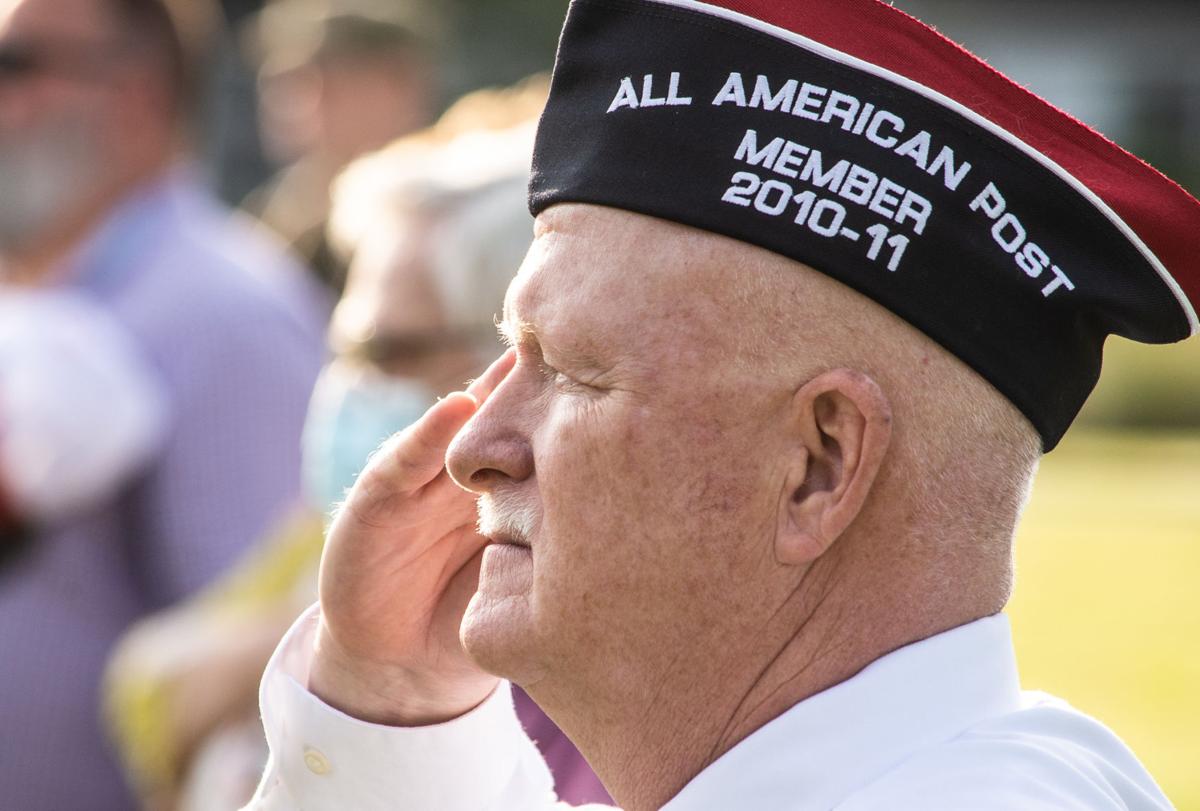 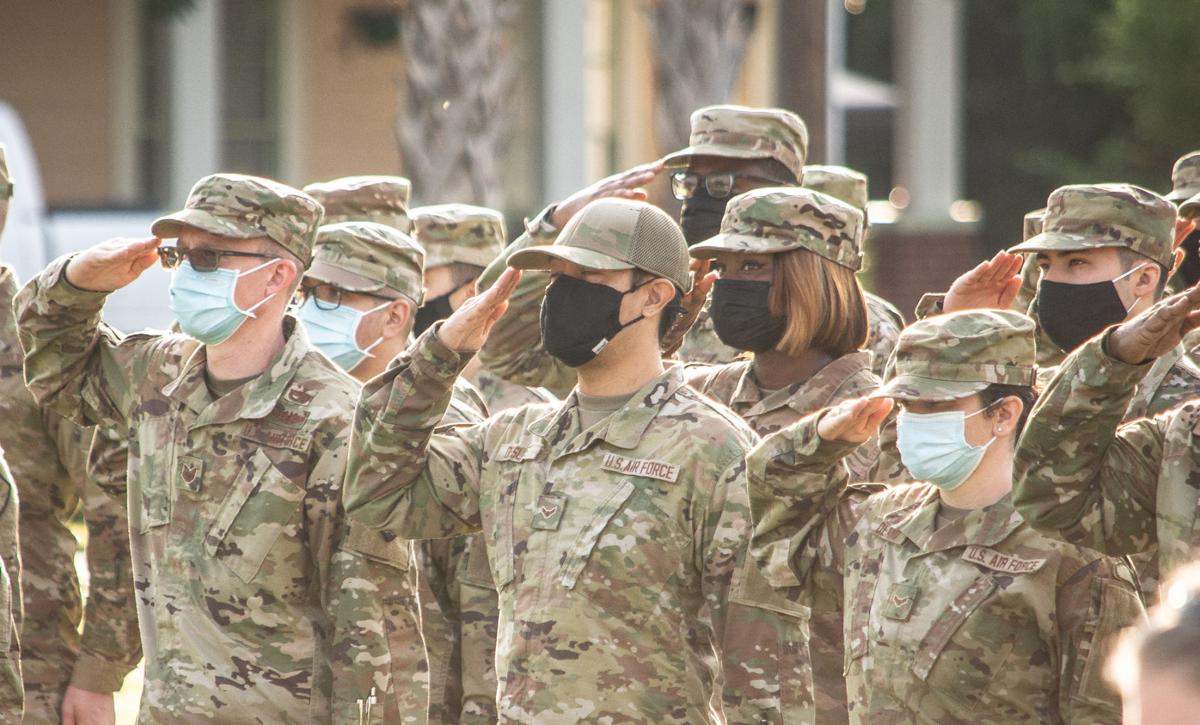 Members of the the 224th Joint Communications Support Squadron salute during their unit’s 9/11 observance at Glynn County Veterans Park. 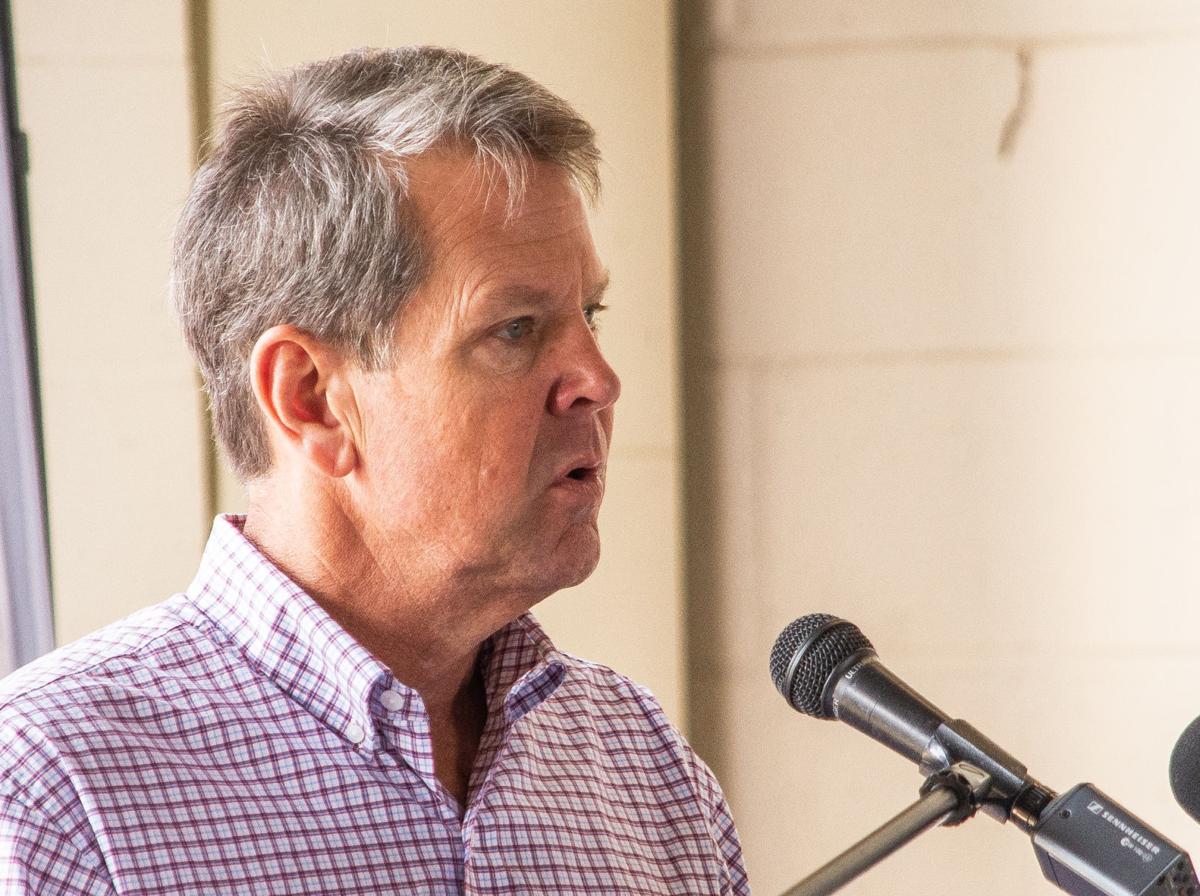 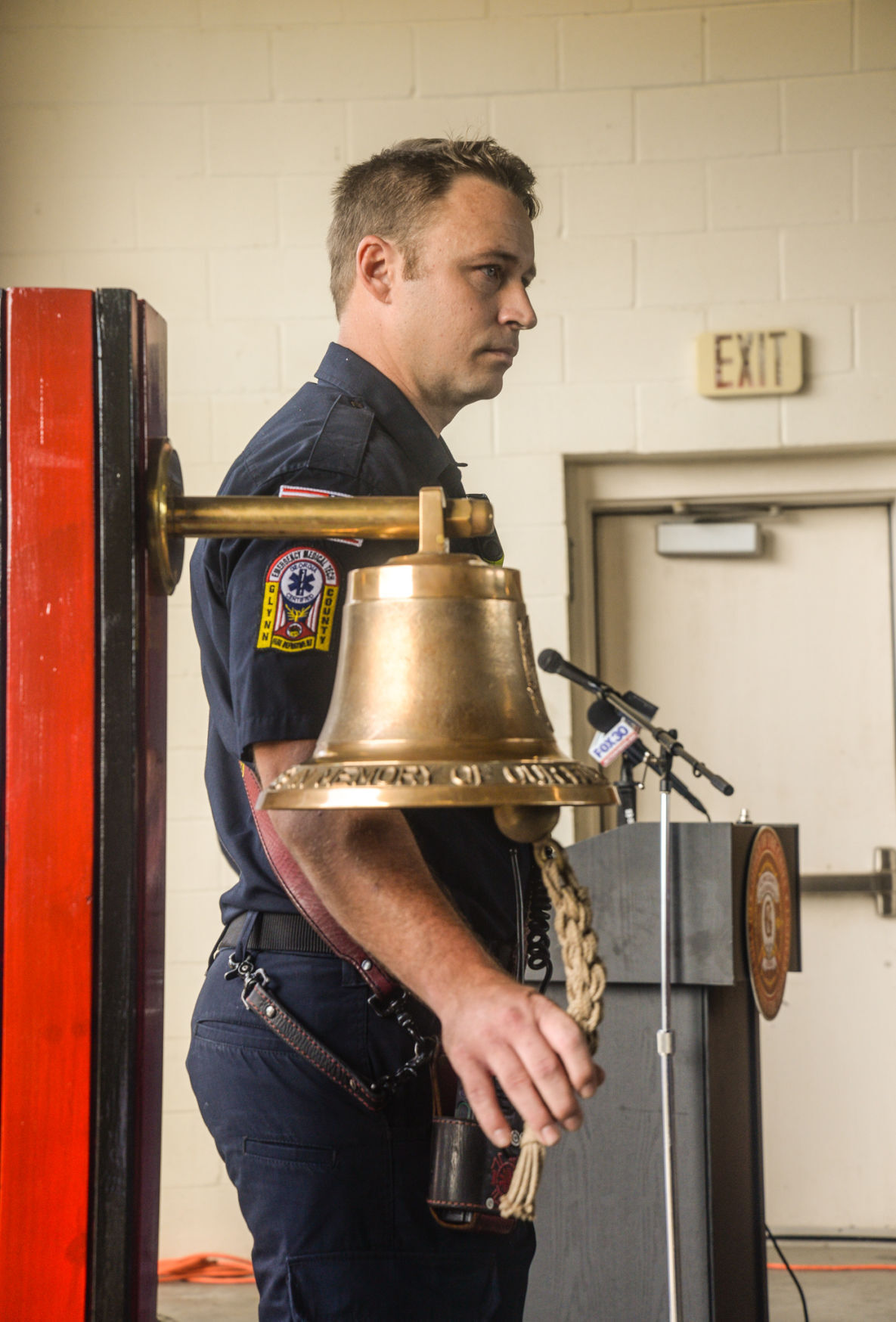 Members of the the 224th Joint Communications Support Squadron salute during their unit’s 9/11 observance at Glynn County Veterans Park.

The 224th Joint Communications Support Squadron of the Air National Guard and Glynn County Fire Rescue held events to keep a promise to never forget the sacrifice of those who died in the attacks when 19 hijackers crashed planes into the Twin Towers at the World Trade Center and the Pentagon. A fourth hijacked plane crashed into a Pennsylvania field after passengers stormed the cockpit.

“These acts shattered steel, but they cannot dent the steel of American resolve,’’ Bush said. “America was targeted for attack because we’re the brightest beacon for freedom and opportunity in the world. And no one will keep that light from shining.”

Naldrett said the 224th was activated almost immediately and deployed to the Middle East to support the war effort.

“During that time we missed our homes, our families and our civilian lives,’’ Naldrett said, but they had a purpose and became vital in carrying out the mission.

“I can remember in exact detail the thoughts, feelings and emotions I felt that day,’’ he said.

In hours the calls came to mobilize and the calls went out to squadron members that they must prepare to deploy. The 224th carried out its mission for more than two years and demobilized on Oct. 4, 2003.

Brunswick Mayor Cornell Harvey said he had recently retired as a master sergeant in the Air Force when the attacks occurred.

“They were here,’’ Harvey said of the terrorist hijackers, ‘’on our beloved grounds, the United States of America.”

He praised the police officers and firefighters who went back into the burning towers, who ran into the fire to carry out their mission to save others.

Harvey said the nation was ready to get justice for the attack and that he expected to be called back to service. He said he was ready.

He wasn’t the only one. He recalled a former Marine who drove to Parris Island to the main gate and asked, “Where do I report?”

In another observance that ended at Veterans Park, about 30 members of the Golden Isles Track Club ran 9.11 miles from the downtown firehouse, across the Sidney Lanier Bridge and back downtown, Michael Desrosiers said after his run. After finishing, the runners were to go by Veterans Park to pay their respects, he said.

The standing room-only crowd gathered inside the two bays of the firehouse and heard Chief Randy Jordan relate the terrible toll that the hijackers took 20 years ago. A total of 2,976 people were “murdered,’’ 2,606 in the collapse of the towers where 60 police officers and 343 firefighters died, he said.

Jordan said they gathered to remember everyone who died, most particularly the police and firefighters who died saving others.

Perhaps the most somber moment was the tolling of four fives on a brass bell. Battalion Fire Chief Hugh Brown explained that long before modern communications, bells were sounded in sequential codes to make fire calls and for other matters.

“This was done as long ago as 1865 for the death of President Lincoln,’’ he said of the four fives.

In his keynote address, Gov. Brian Kemp noted those who died in the attacks and the subsequent wars were husbands, wives, sons, daughters, aunts and uncles.

“Above all, they were fellow Americans,’’ Kemp said. “I know all of us felt a sense of despair.’’

But in the following days, “the sense of resilience shined through,’’ he said.

Kemp noted New York firefighters and police ran toward the danger and that the passengers took a plane back from its hijackers. After the passengers stormed the cockpit, United Airlines Flight 93, which the hijackers had turned toward the East Coast, crashed in Somerset County, Pa.

“We will never let any act of cowardice define us,’’ Kemp said.

He praised the troops who have kept the nation safe 20 years, brought justice and protected Afghanis who wanted to live in freedom.

He told the firefighters and police, “We are grateful for you. We will continue to pray for you and our troops.”

At the end of Kemp’s speech, the crowd moved to the flagpole where firefighter Kevin Pennington and police officer Earl F. Wilson unfurled a flag provided by the Woodmen and raised it to half staff.