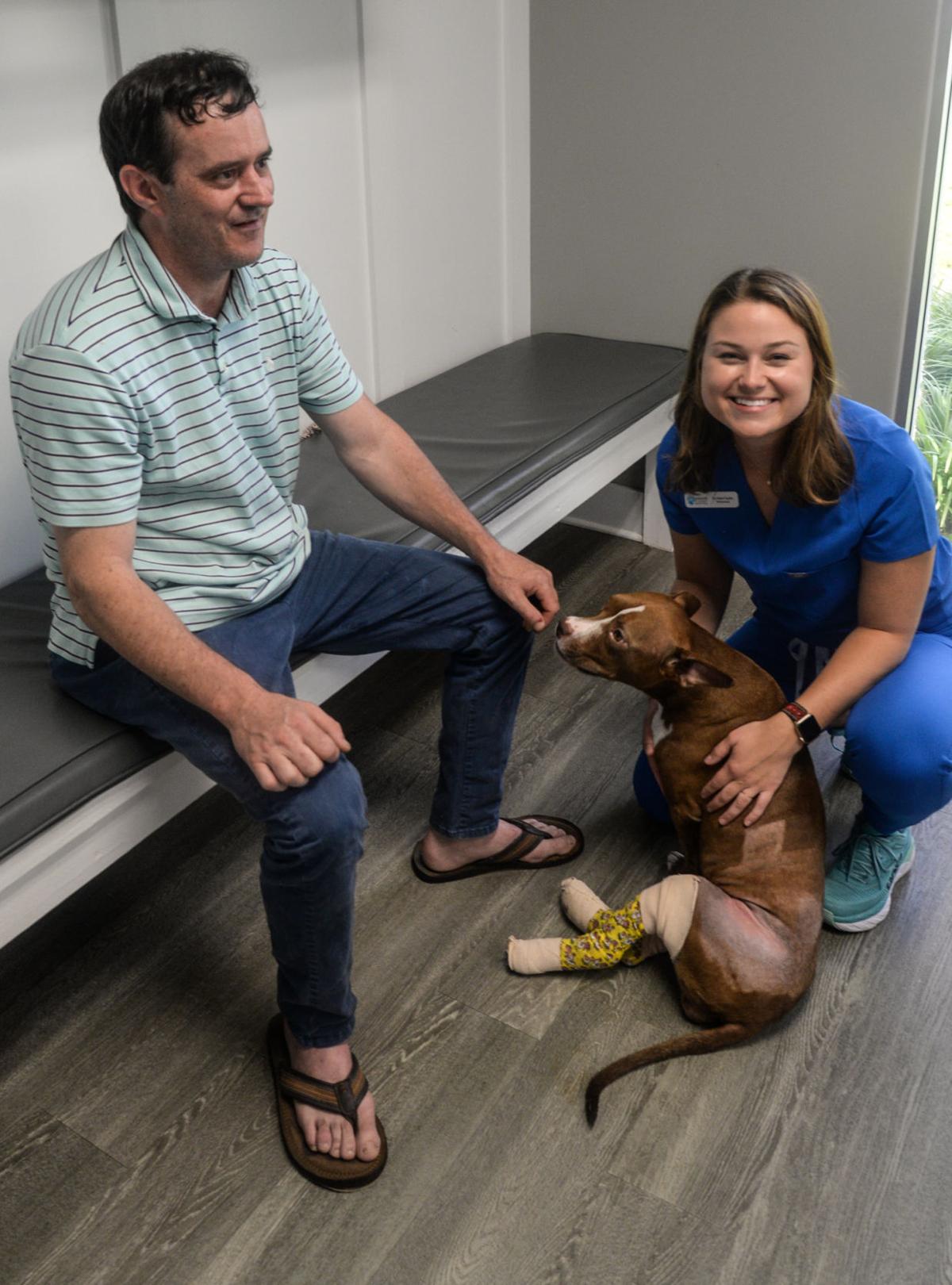 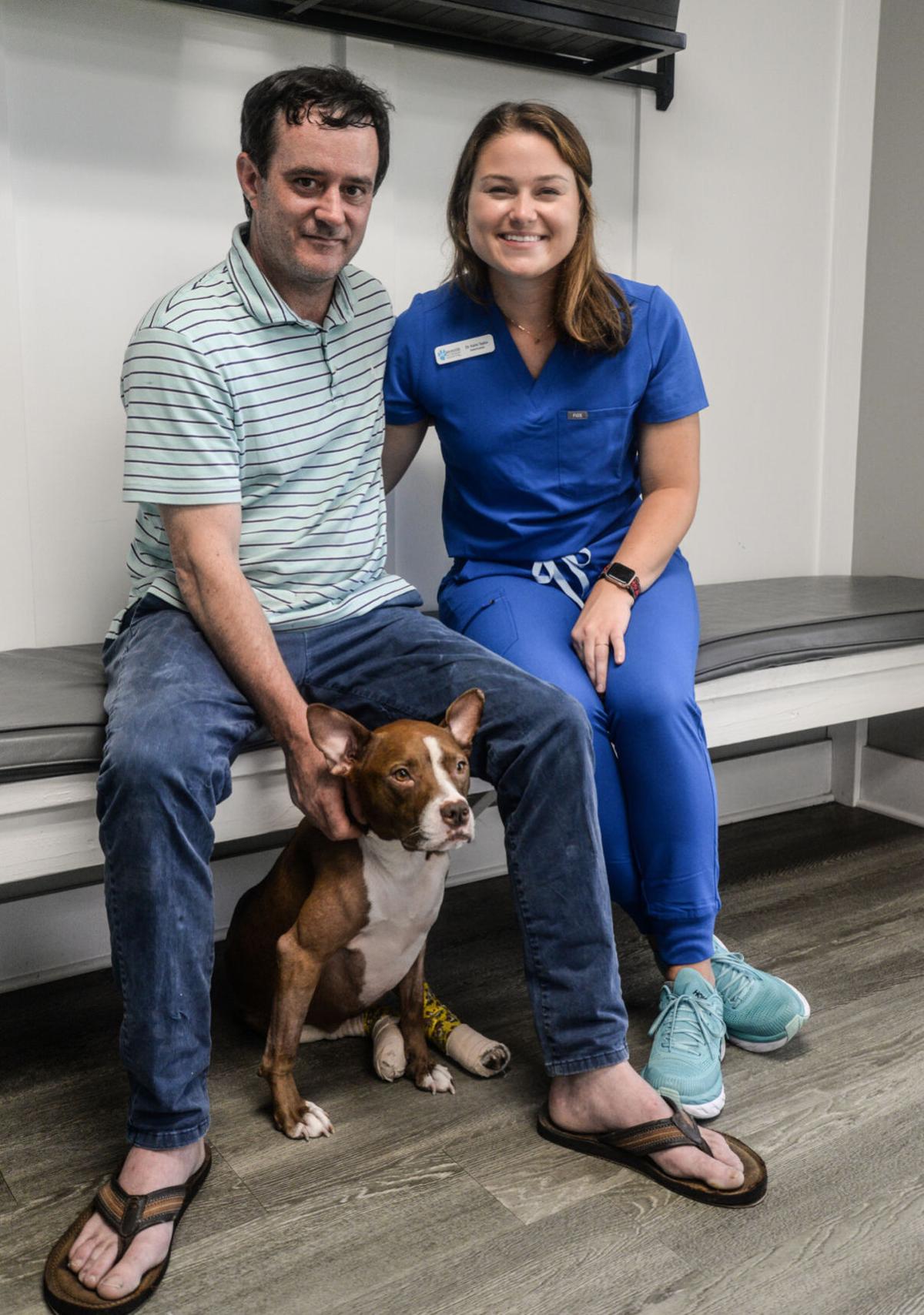 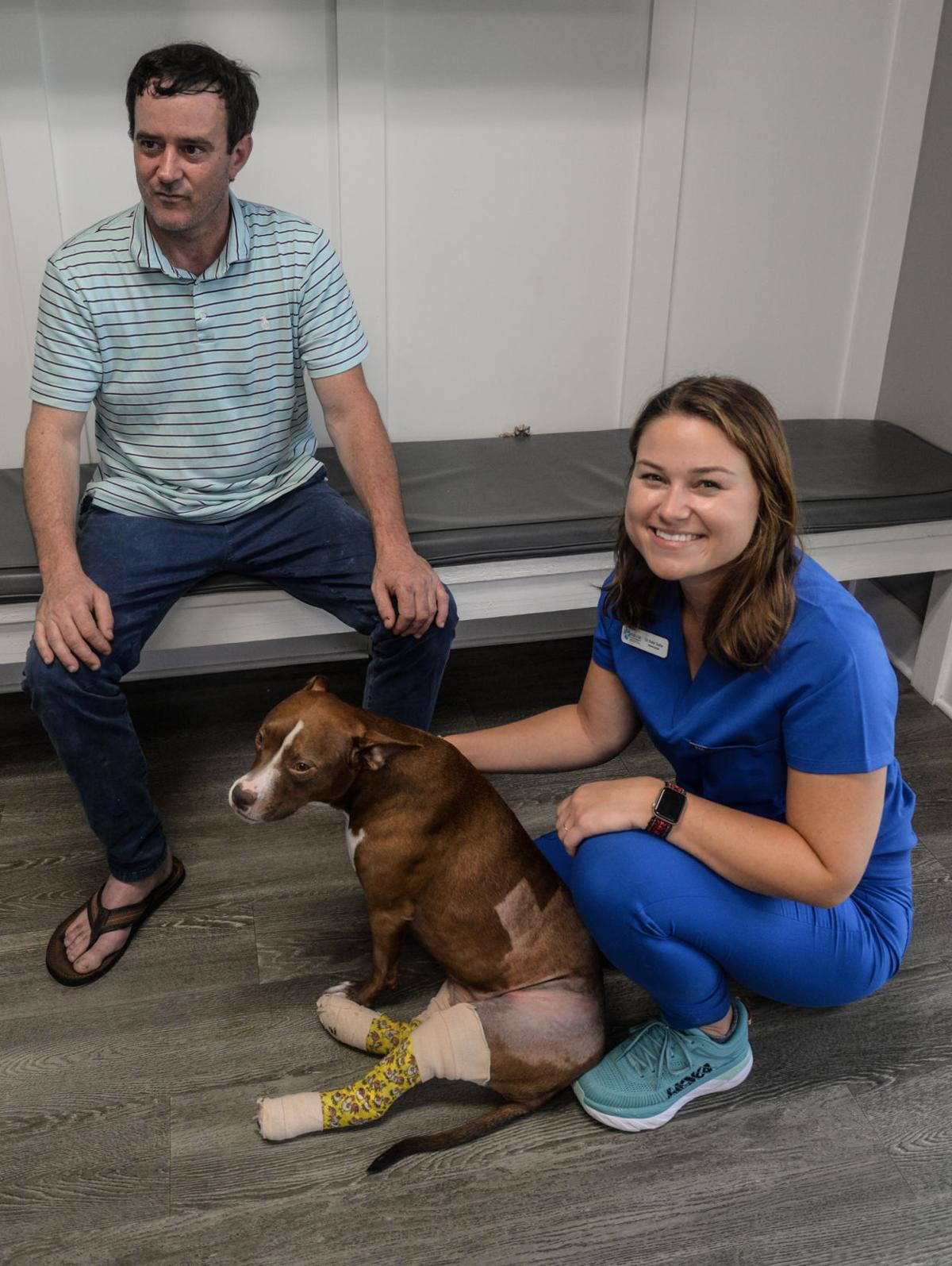 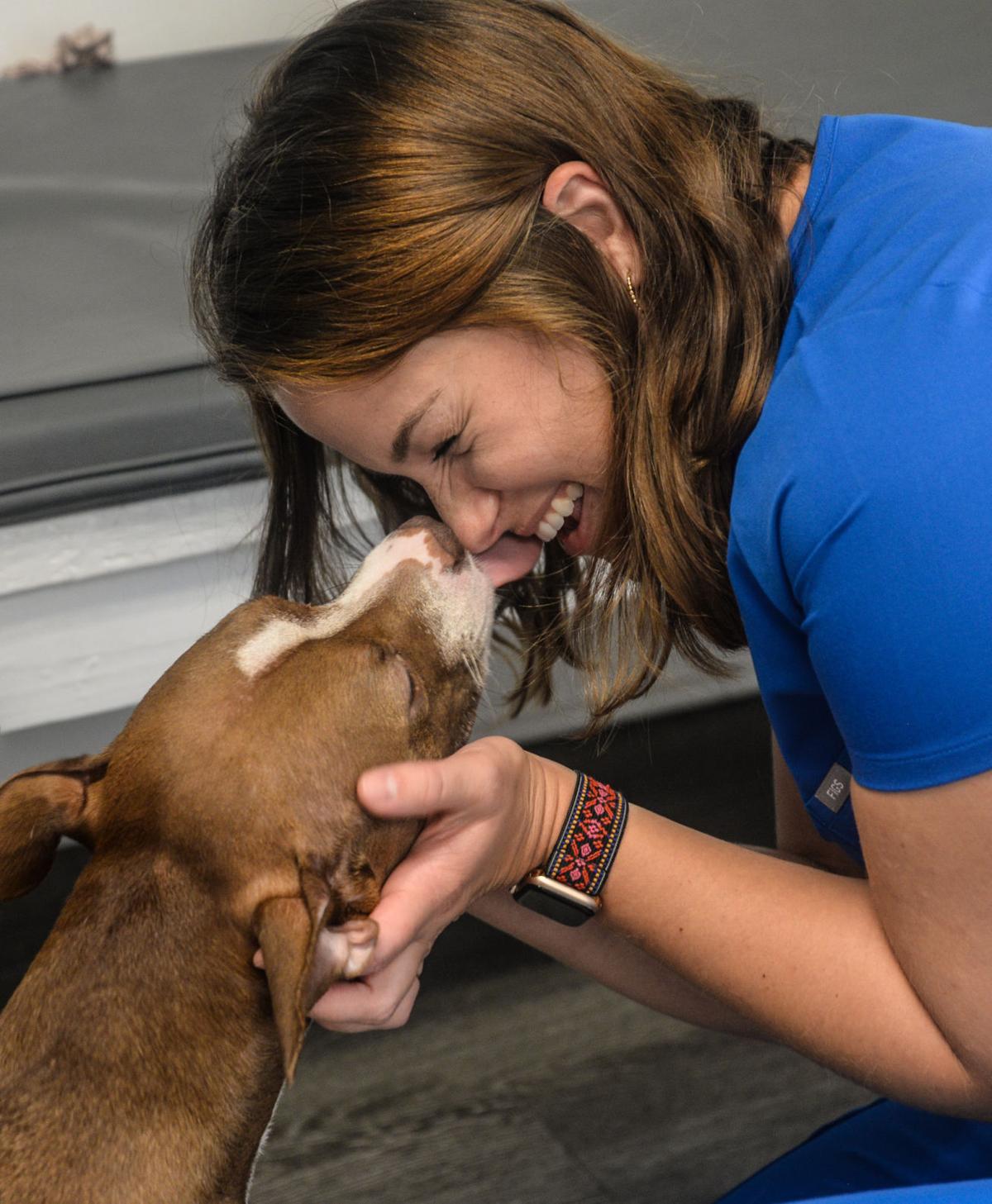 Arista thanks Dr. Katie Taylor for her care at Seaside Veterinary Hospital on St. Simons Island.

Arista thanks Dr. Katie Taylor for her care at Seaside Veterinary Hospital on St. Simons Island.

The little brown dog sat on the floor between Kurt Batterson’s feet.

The dog’s ears perked up, her tail happily thumped in response. Slowly Arista used her front legs to drag her bandaged feet across the crisp white floor of Seaside Veterinary Clinic to meet Taylor.

“She doesn’t always like me because I’ve been the one sedating her,” Taylor said with a laugh.

But this day, she was a fan. And it was clear that despite her ordeal, Arista was still filled with love to share.

“I honestly just can’t believe she’s alive and has all her legs,” Kurt said with a smile, looking down at her.

A little over two weeks ago, neither was guaranteed. The pit mix was hit by a car and very nearly died.

After a frantic rush to a Jacksonville Pet ER, Kurt and his sister, Bonnie, found themselves entirely broken — both emotionally and financially.

Not only were they unsure of whether their beloved pet would live, but they were also being quoted an astronomical figure — more than $10,000 — to put their sweet girl back together.

“She had a broken pelvis and some serious road rash on her paws ... it was down to the bone. When I first talked to Kurt on the phone, it was the day after. He told me that it was pretty bad and he was trying to find someone to take her locally and no one would,” Taylor said.

“He said that he didn’t have the money that the clinic was asking for — who would — but that he had a little. I just told him to bring her to me and we’d figure it out.”

Arista arrived at Seaside Veterinary Clinic, off Skylane Road on St. Simons Island, the day after her accident. Taylor and her team sprang into action, managing her pain and keeping her wounds clean. They also started antibiotics to stave off a deadly infection.

“We put her under to change her bandages because it would have been too painful,” Taylor noted.

Meanwhile, Kurt and his sister were trying to find ways of funding Arista’s care. Both had emptied their savings accounts to cover the emergency costs. They were at a loss as to where to find more money.

So they rolled the dice and created a Go Fund Me page on the off chance that someone might throw a couple of dollars their way.

They were not optimistic.

“I’d never even heard of (Go Fund Me) really before but I had a friend who suggested I do it. I wrote the post in like three minutes. I’d never done anything like that before but I was just honest,” he said.

In the post, Kurt poured his heart out, sharing how much he loved Arista and how she helped him through the unexpected death of his fiancé, Sherrie.

“Arista just did so much for me. I remember when I would be crying, she’d come check on me. I told her that I’d be alright soon ... and after she got hit, I told her the same thing — you’re going to be alright,” he said.

“We knew how important Arista was to Kurt. We wanted to keep her alive and give her the care she needed without Kurt going into debt. We just wanted to help keep them together,” Taylor said.

It was this — the pure love between a man and his dog coupled with Taylor’s selfless offer to treat her that captured the heart of the community. Once the story started circulating, people opened their hearts — and their wallets — to shower Arista with love.

Good hearted folks stepped up in a big way to help save Arista as well as help get Kurt and his sister back on their feet. Not only did they flood the Go Fund Me page, but they also donated to Seaside Veterinary Hospital directly. In a matter of a few days, the Go Fund Me had nearly $8,000 with the clinic seeing a similar response.

“I couldn’t believe it,” Kurt said, his eyes welling up with tears. “I just have no words. People were calling and texting. People at the restaurant, even people I didn’t know would stop me and ask about Arista. It was incredible. I get goosebumps every time I think of it.”

“Kurt has told me over and over since this started that he can’t believe how much people care. It’s been so heartwarming to see everyone band together to help her. People would bring their own dogs in ... they’d ask about Arista and would donate. This community has been amazing,” Taylor said.

Now, the bill has been entirely resolved with a healthy amount in reserve to cover Arista’s continued care. That, Taylor notes, will definitely include physical therapy and possibly surgery on one of her severely injured paws.

“She’s really doing amazing. Her wounds are healing. Her pelvis is stabilizing. She’s starting to stand and walk a little,” she said. “We’re going to have to wait until the wounds on her feet heal to see what needs to be done but overall she is doing great.”

Kurt is hopeful that when Arista is fully mended, he can hold a “thank you” cookout for the community. There, donors can meet the sweet dog that their love help saved.

“I really want to do that for everyone. I work at Bennie’s Red Barn, so I’ve been talking to the cook there about maybe doing a barbecue,” he said. “I just want to tell everyone thank you ... obviously. Thank you from the bottom of my heart.”