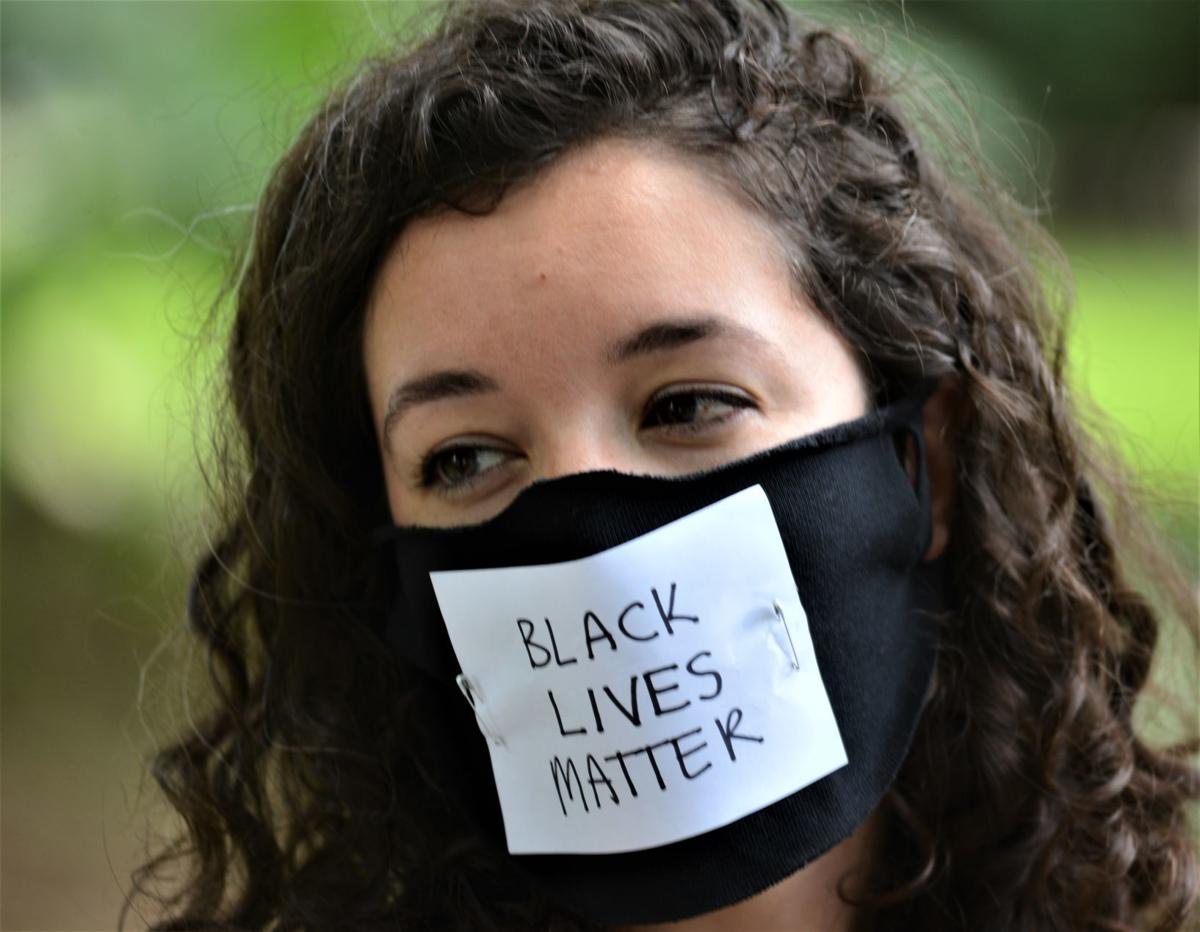 Laura Khurana of St. Simons wears a mask with a message at Sunday afternoon’s prayer walk at the Glynn County courthouse. 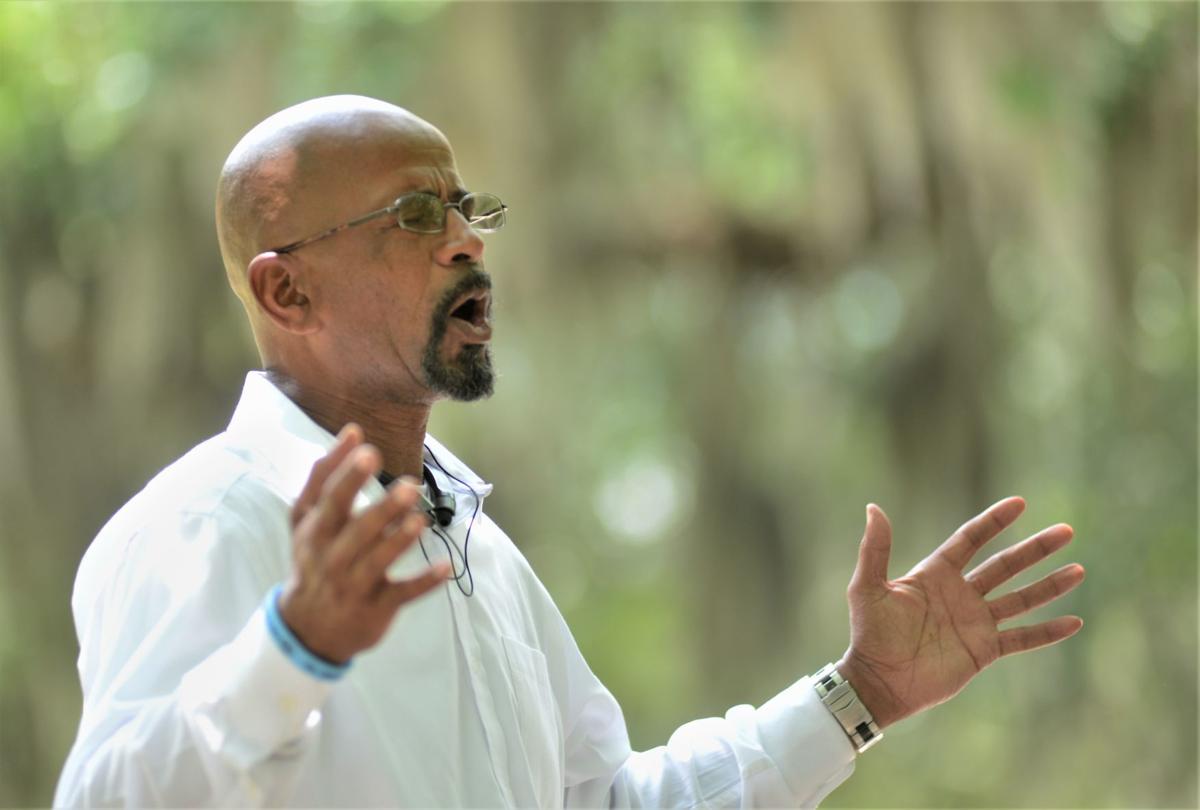 Rev. Terry Walker of It’s Not About You Ministries prays Sunday. 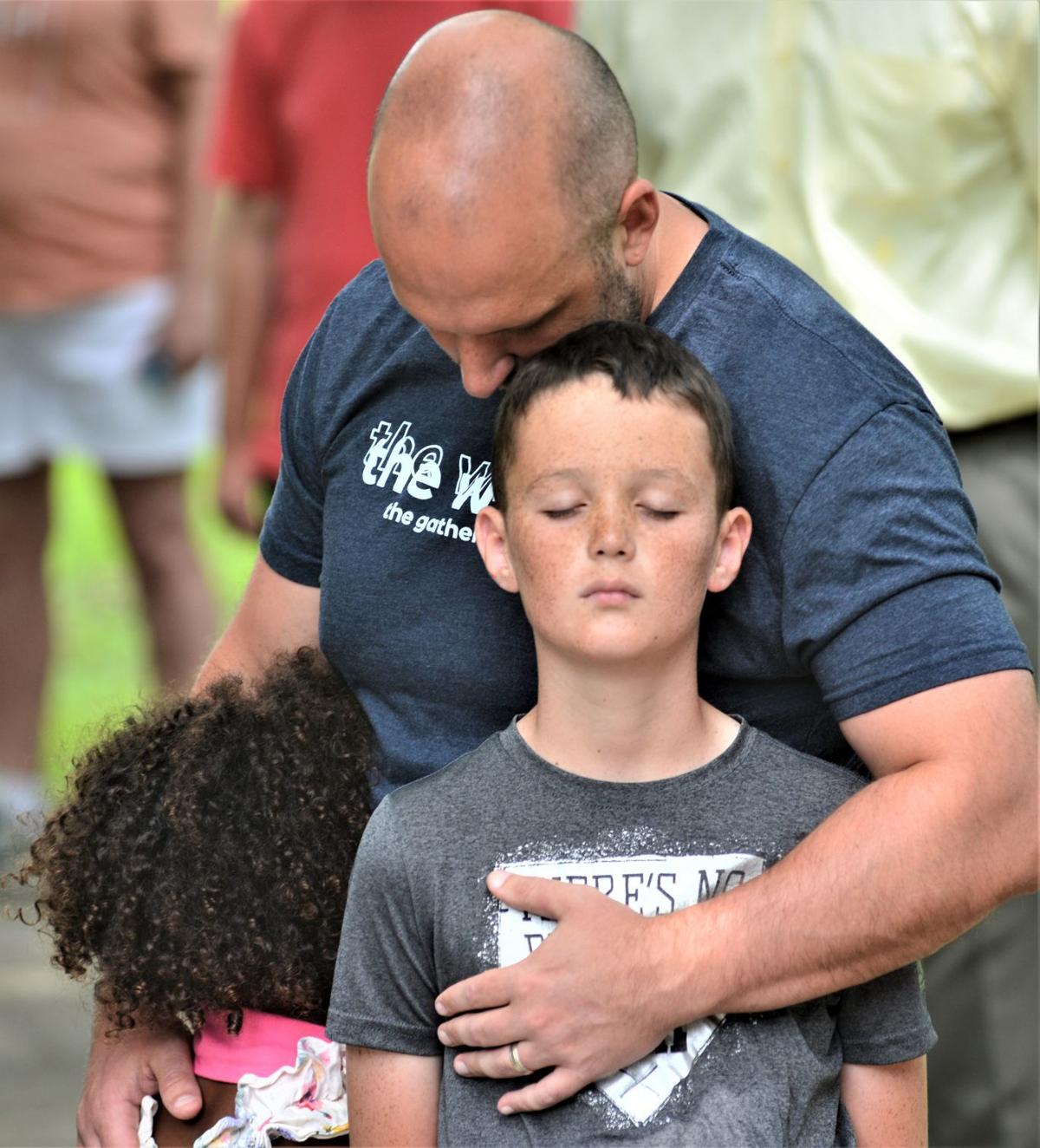 Jimmy Gunderman of The Gathering Place holds his children Piper, left, and Channing, close during the Sunday afternoon pray walk. 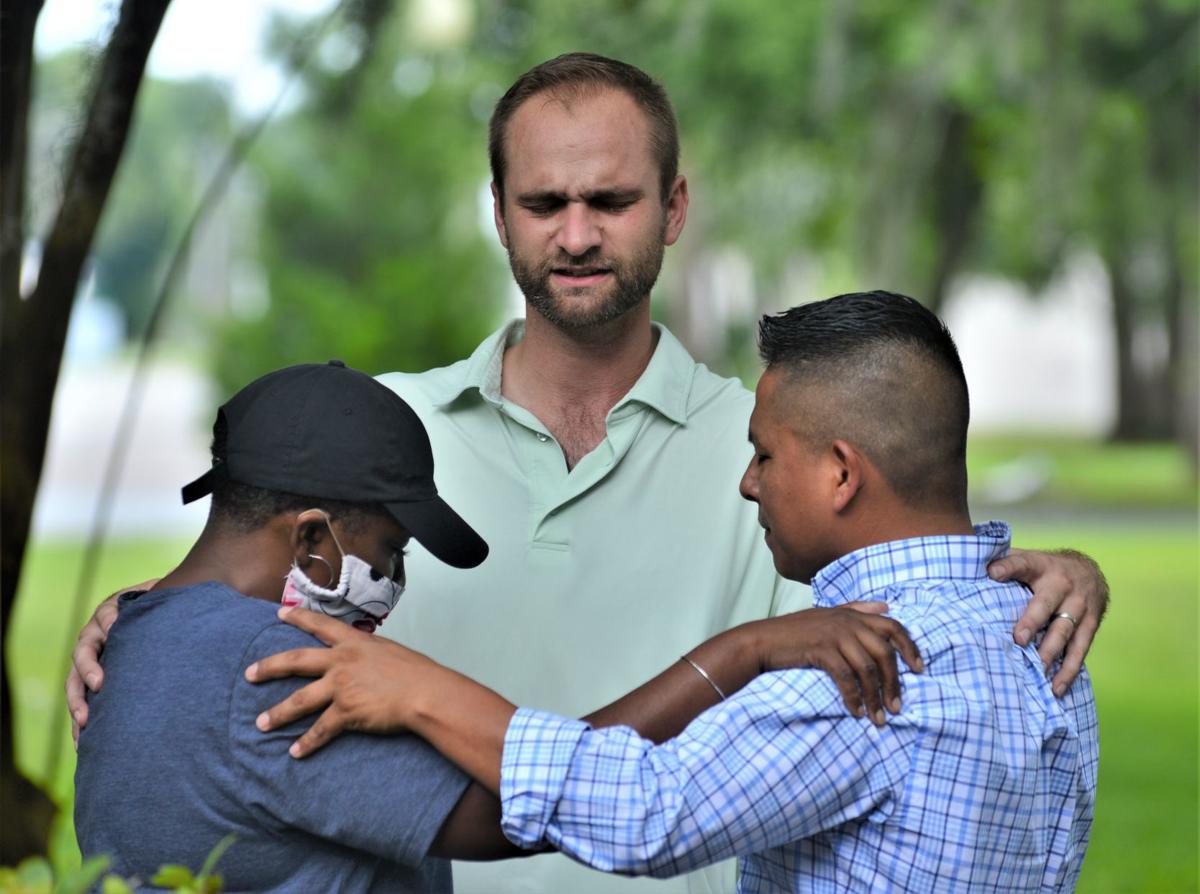 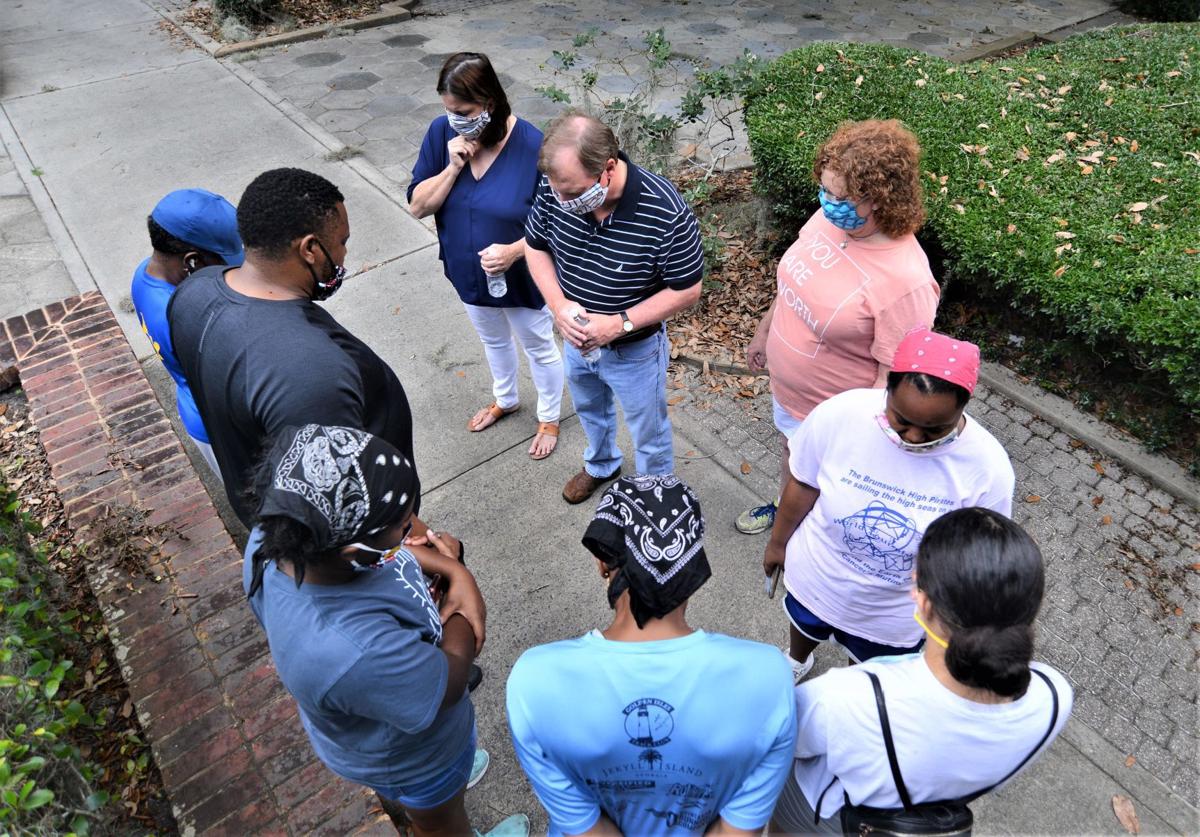 A group prays together. 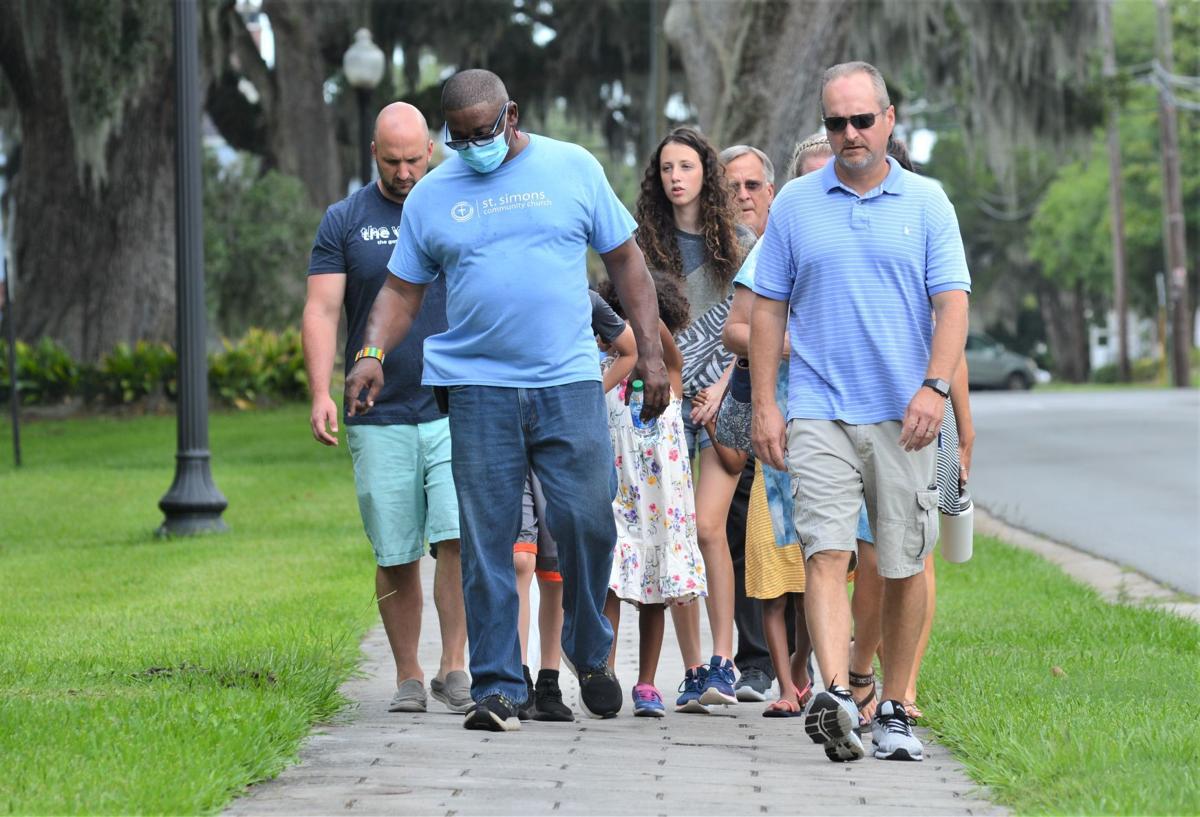 Laura Khurana of St. Simons wears a mask with a message at Sunday afternoon’s prayer walk at the Glynn County courthouse.

A group prays together.

Once the epicenter of international outrage over the shotgun slaying of Ahmaud Arbery, Glynn County has seen violence erupt in the past few days in the wake of George Floyd’s death at the hands of Minneapolis police. The violence began and was perhaps worst in Minneapolis where Floyd, an African-American, died after a police officer pinned him to the asphalt for eight minutes with a knee on his neck.

Area churches called on their members to hold prayer walks through their neighborhoods at 2 p.m. while a few pastors and others gathered at the county courthouse for prayer.

At the bidding of St. Simons Community Church pastor David Yarborough, who led the gathering, the first prayer was offered in Spanish by Jimmy Marinez, pastor of Church of the Rock, a Hispanic congregation in north Brunswick.

Martinez had said earlier he came to pray and support those who know God is the answer for all that is besetting the country.

“We need peace. We need God to intervene,’’ and for believers to join ranks in prayer, Martinez said.

Bill Reckling said he came after watching the violence and destruction on TV news.

Everyone wants to do something, Reckling said. “I can do this.”

The Rev. Terry Walker, pastor of It’s Not About You Ministries, asked God to move in homes, government and schools.

“You do it by your spirit. How can we do it without You, oh God?’’ he prayed.

He also acknowledged that everyone is the same in God’s eyes.

The Rev. John Williams came to the courthouse after his congregation at Maranatha Baptist Church walked and prayed around their church and into the community on the troubled north end of Ogg Avenue.

“We had a great walk this morning. We were just saying, ‘Lord, please.’ A move of the Lord is needed,’’ he said.

Although the recent unrest spurred the prayer walk, Williams said Maranatha’s neighbors live under a cloud of drugs, crime and poverty. Williams said his heart breaks for the children growing up in those conditions and that he asked God to move there.

Some who saw them misunderstood their purpose, Williams said, and asked, “‘What are y’all doing? Protesting?’ No. We’re praying.”

When he prayed at the courthouse, Williams noted there is a lot of pain in the local community and “indeed, the whole world.” He said that people must recognize that change can come only through the spirit of God, “not by your intellect or your education.”

Yarborough asked God to let “justice, righteousness and peace reign in this country.”

After the pastors prayed, the crowd formed into groups, some as small as three people, and prayed together. Many in the crowd wore masks and kept their distances from others while some draped arms over each others’ shoulders as they prayed.

A few larger groups walked around the historic courthouse and in front of the main courthouse praying aloud as they went. Another group formed a circle and prayed in turn.

Because of the expected heat of the afternoon sun, they gathered first in the shade of the crepe myrtles about halfway between the courthouses.

As they joined into smaller groups, clouds blocked the sun and cooled by a slight breeze, they walked comfortably as they prayed.

Frat Beach festivities may be on the dry side this year as the Glynn County Commission looks at banning alcohol on East Beach during the annual revelry.

Jekyll Island Authority hopes to improve its golf experience, and a 10-month long effort to create a new master plan for island golf is wrapping up.