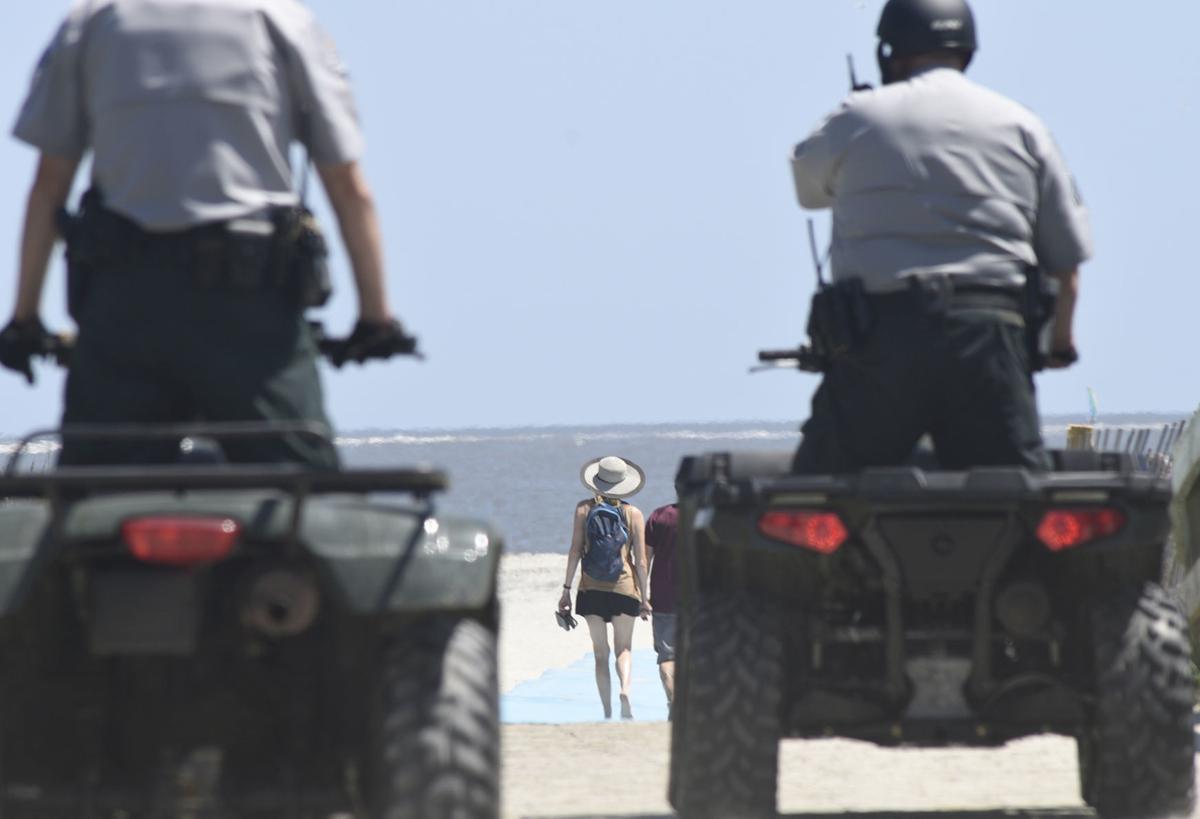 Law enforcement personnel, above, head down to the Coast Guard station beach Monday. Below, beachgoers keep their distance while walking on the beach. 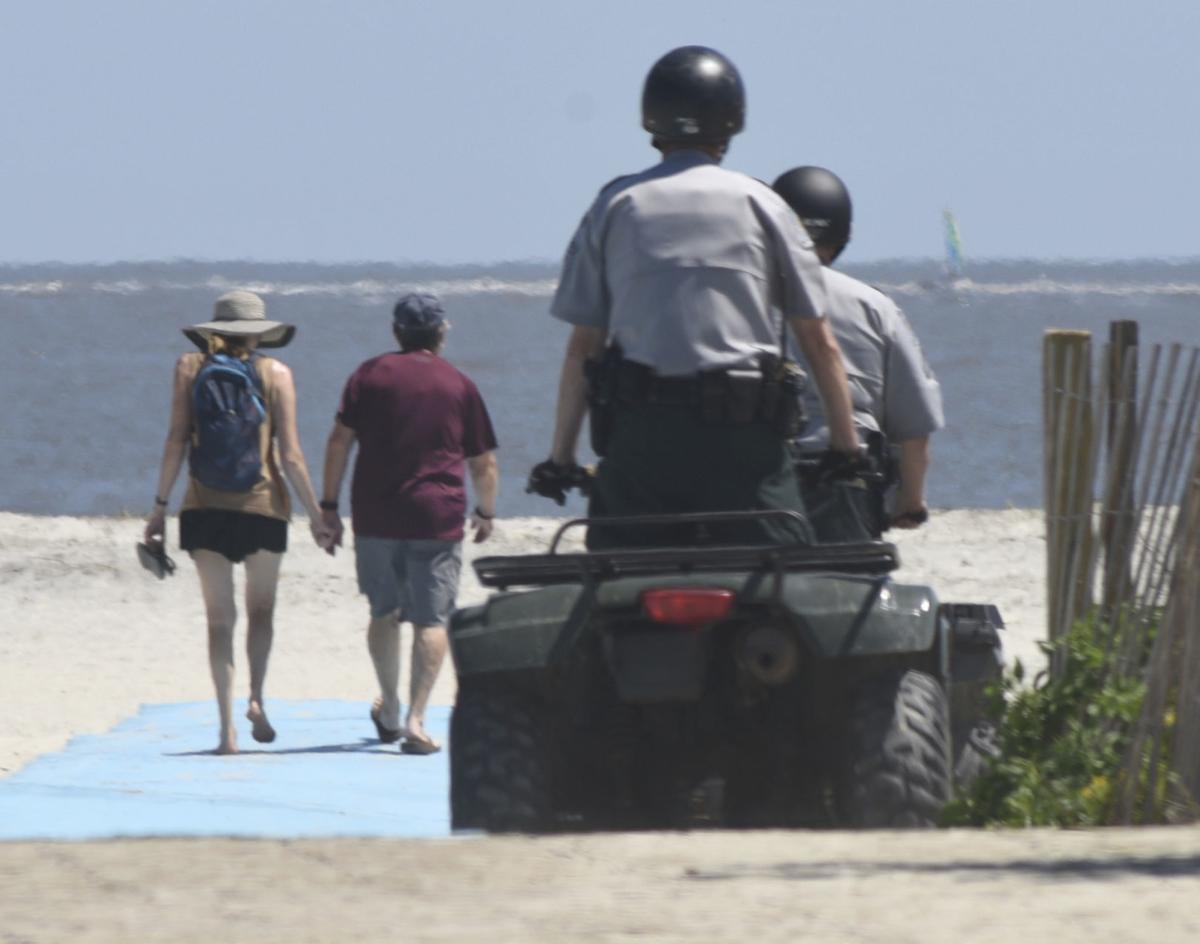 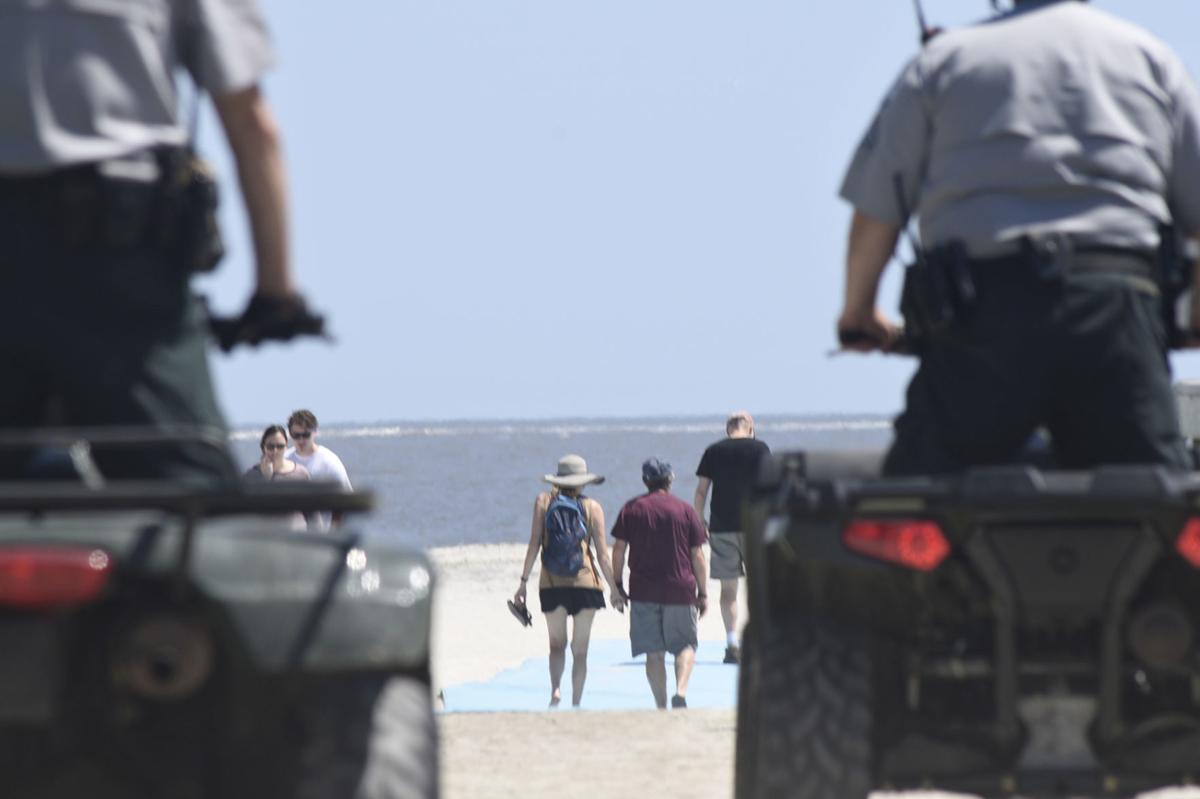 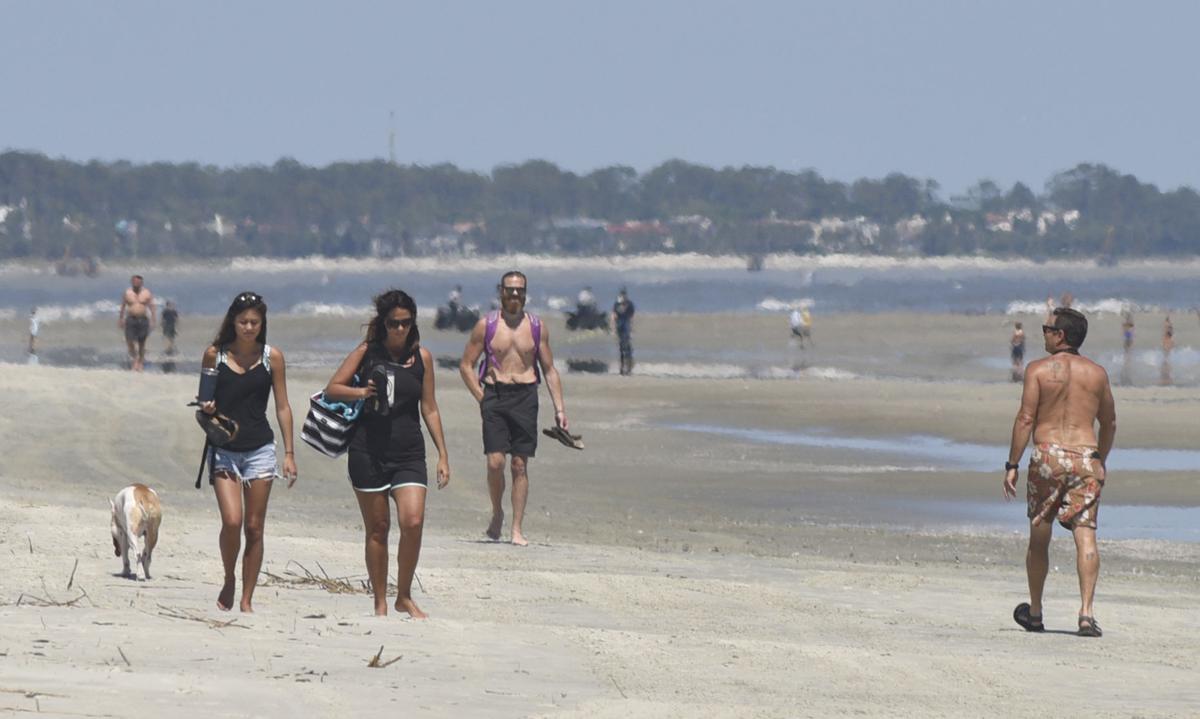 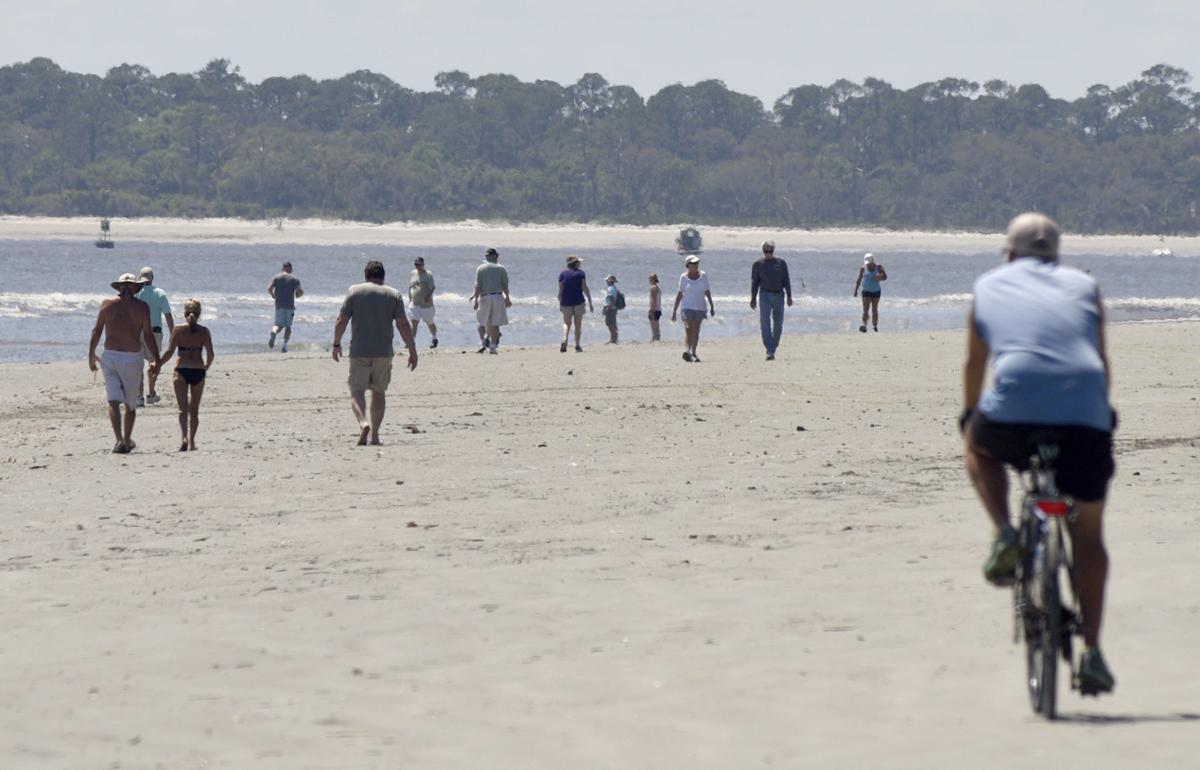 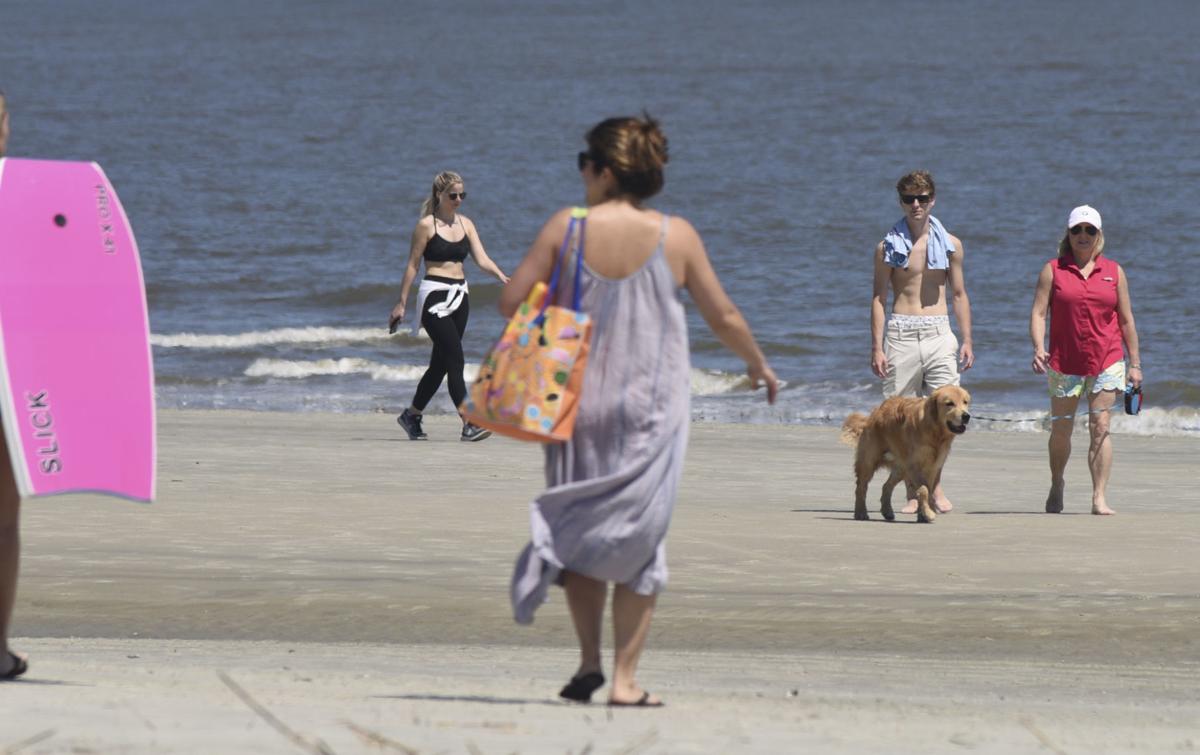 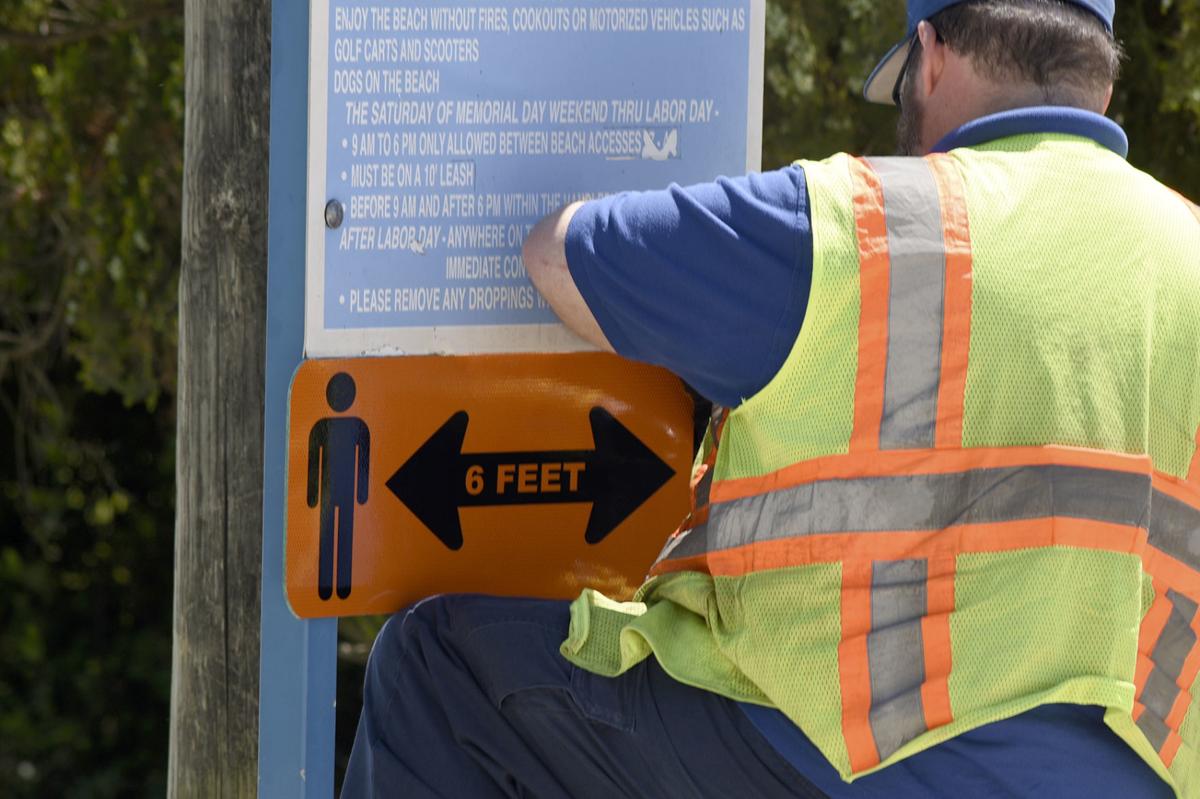 Glynn County personnel place a sign at the entrance to Coast Guard station beach to remind people about social distancing.

Law enforcement personnel, above, head down to the Coast Guard station beach Monday. Below, beachgoers keep their distance while walking on the beach.

Glynn County personnel place a sign at the entrance to Coast Guard station beach to remind people about social distancing.

“We have been hung out to dry,” Browning said.

“While we applaud your ‘shelter in place’ directive as the correct move, additional immediate actions are necessary,” Browning’s letter reads. “Many of the suspended local ordinances and orders are more restrictive than your executive order and go further in their efforts to slow the spread of COVID-19.”

This is the time to be tightening restrictions, not loosening them, he said.

“Just yesterday, U.S. Surgeon General Jerome Adams stressed the importance of this coming week to the United States and stated that ‘This is going to be the hardest and the saddest week of most Americans’ lives, quite frankly. This is going to be our Pearl Harbor moment, our 9/11 moment, only it’s not going to be localized,’” Browning wrote.

The letter also stated that the action of repealing local measures intended to slow the spread of COVID-19 would impede local governments’ ability to respond to the outbreak moving forward, and called on the governor to allow counties and cities to once again enforce emergency ordinances.

In an interview, Browning said he sees the executive order as just another attempt by the state government to undermine local authorities, also mentioning an attempt by state legislators Sen. William Ligon, R-White Oak, and Rep. Don Hogan, R-St. Simons Island, to put the future of the Glynn County Police Department on the ballot for popular vote.

When the commission first decided to close the beach, Browning said the governor was in full support, offering help in the form of manpower from the Georgia State Patrol and Department of Natural Resources and supplies from the state Department of Transportation, which put up signs on I-95 warning travelers that the beaches were shut down.

“How can it not be politics when (Kemp) wants the beach closed and then opens them up?” Browning said.

He considers Kemp’s executive order evidence that the governor is bowing to pressure from short term rental advocates, who are pushing for a bill in the state legislature to put regulator control of rentals in the hands of the state and out of local governments.

On the other hand, no one from the state has consulted Glynn County or any coastal community, to his knowledge, about anything in relation to the outbreak or the executive order, Browning said.

“There is no leadership in this state,” Browning said. “I’m almost ashamed to be called Georgian.

Glynn County Commissioner David O’Quinn was among the strongest supporters of closing the beaches. He felt it was the right decision as a commissioner, as a St. Simons Island resident and as someone who had his own COVID-19 scare.

He turned out to be uninfected but decided to be cautious and phoned in to a commission meeting late last month.

On Monday, he said he was very disappointed in the state’s decision to reopen the beach.

“We’re a unique community in the sense that we have a lot of people coming from different areas, and so closing the beaches was a way to limit the attraction of those coming down here. Closing the short term rentals and the hotels that were still open was another step in trying to insulate our community,” O’Quinn said.

He hasn’t been on the beach but has heard plenty of positive reactions. None assuage his worries.

“I’m just concerned the combination of national exposure, that our beaches are open and short-term rentals are now available that we might see more folks from other areas, hotspots, coming down here to get away from where they were for a couple of weeks to try to ride it out,” O’Quinn said. “We all live in such a small area with only two grocery stores, a few drug stores. You have a greater chance of seeing the virus spread.”

While lodging rentals aren’t banned, Golden Isles Convention and Visitors Bureau President Scott McQuade said nearly all resorts and large hotels have ceased operations for the entire month of April, if not longer.

“This is the case for both island properties and (I-95) properties as many cannot function properly with such a drastic reduction in occupancy (due to mandatory social distancing),” McQuade said. “Additionally, the vast majority of vacation rental management companies are continuing to restrict short-term reservations.”

He said the commission’s earlier decision to close the beaches and rentals were “extremely effective and necessary,” and hopes the lodging rental community would pull together to continue to help slow the spread of COVID-19.

“We also ask that independent property owners adhere to a similar course of action for the safety of the community,” McQuade said.

Most of the lodgings still operating are serving the essential workforce, he explained.

“In fact, of the few inquiries we are receiving for business in April, the vast majority are involved with the Golden Ray, increased essential factory production or transportation,” McQuade said.

He said the CVB has not seen the influx of people local officials fear. The agency does not consider general leisure or vacation travel to be “necessary” as defined by the order, and are discouraging rental companies from advertising it as an amenity for the duration of Kemp’s order.

“Having the beach open might be a nice amenity for residents who wish to use it for exercise, but it should not be marketed as a means to encourage unnecessary leisure travel at this point,” McQuade said.

Kemp’s office did not return a request for comment.

While he’s got some reservations about how the order has been handled, Jones said he thinks Kemp is doing a fine job overall.

There are those who support the move.

“I think it’s a good idea to try to open it up and let people have access to outdoor activities, and open air and sunshine,” said state Sen. William Ligon, R-White Oak.

He was not part of the decision-making process, and knows of no one representing the Golden Isles who was.

“I think he felt like there was a need for a little more uniformity across the state in policy to address COVID-19,” Ligon said.

The state Department of Natural Resources’ ban on chairs, tents and umbrellas on the beach will likely go a long way, Ligon said, and he doesn’t see a need to close the beaches again unless the public proves it can’t adhere to the social distancing mandate.

“I think (Kemp) trusts the people of our state to do the right thing,” Ligon said.

On the other hand, he said commissioners’ concerns about people coming to the Golden Isles from virus hotspots “can’t be ignored.”

Pelican Market on Ocean Boulevard has been getting by, said owner Kathryn Ross, offering curbside service to those who would rather not brave the interior even with social distancing measures in place.

She’s not a big fan of reopening rentals but has no qualms about keeping the beach accessible for exercise.

“If they’re walking and stuff, it’s fine. It hasn’t increased my business any,” she said.

Bobby Brown, owner of ZuZu’s and Moondance, both in the Pier Village, said the outbreak and subsequent shelter-in-place order could not have come at a worse time for him and his two businesses.

Curbside service is about all he can offer, but Brown said he’s still losing money.

To him, the county’s decision to close the beaches in the first place was not the best call to make given the circumstances.

He said he doesn’t blame the county commission for trying, but doesn’t think it was a good idea all things considered.

“Both my businesses are at the pier, and to me, the safest place on Earth is at the end of that pier and along the coast with all the breeze and everything,” Brown said.