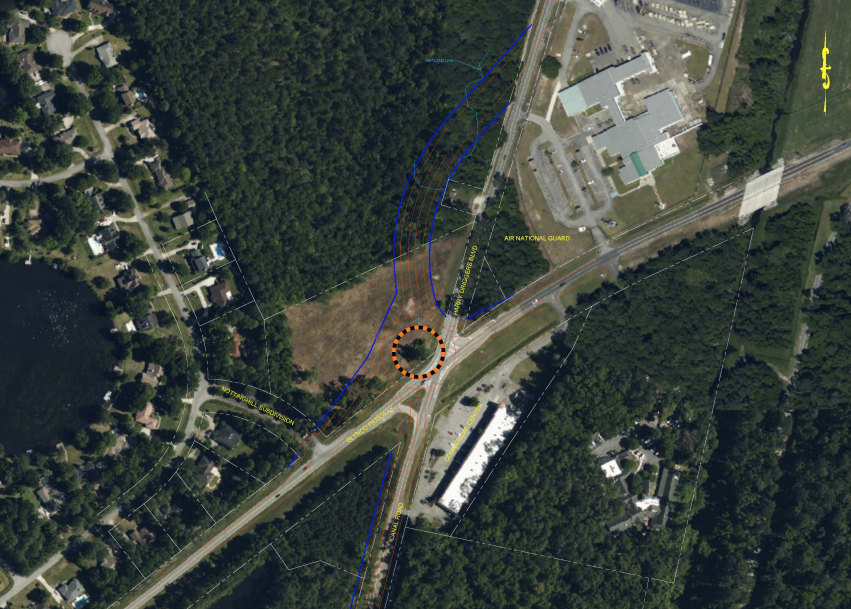 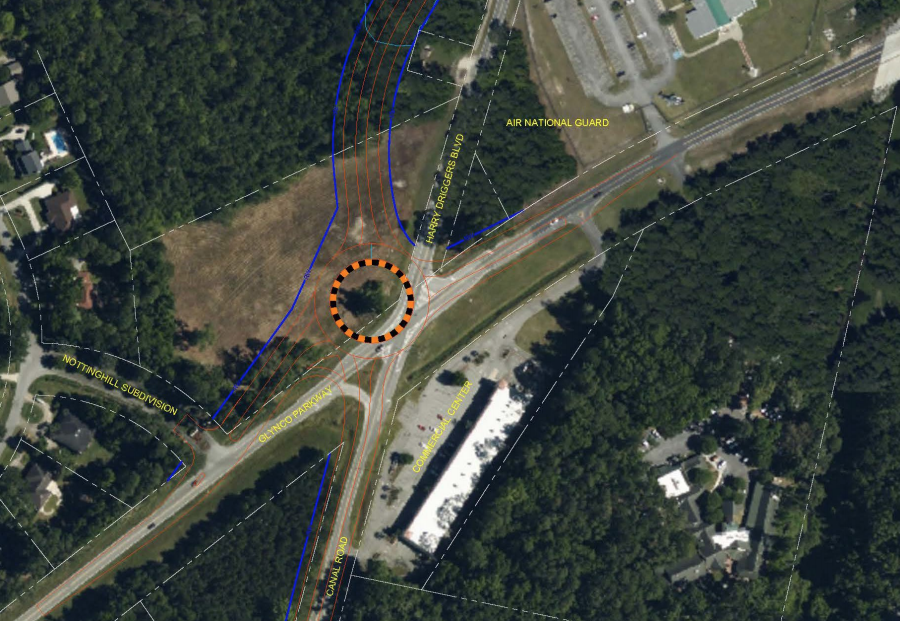 Commissioners were presented with a total of four concepts for the roundabout at a work session, settling on one that kept the center of the intersection near where it currently is without affecting the entrances to nearby residential and commercial developments.

An entrance to the nearby Nottinghill subdivision would remain open in the preferred concept, said county engineer Paul Andrews. One of the early concepts involved closing the access road.

The plan will change slightly due to the potential involvement of the Glynn County Airport Commission in the project. Over 70 acres of wooded land just to the north of the intersection is owned by the airport commission and designated for commercial use. Adjusting the conceptual plans and moving the straight section of Harry Driggers Boulevard entering the roundabout to the west would open up much of the land to subdivision and development, Andrews said.

While plans aren’t finalized, Commissioner Wayne Neal, who represents the district the intersection is located in, said the roundabout will have two lanes in order to accommodate the future four-lane expansion of Canal Road and Glynco Parkway.

Funding for the project is included in a proposed Special Purpose Local Option Sales Tax 2021 project list to the tune of $5 million.

Commissioners hope to impose the 1 percent sales tax for three years to collect a total of $68.5 million for various infrastructure and capital projects and expenditures. Voters will have the final say on SPLOST 2021 in a March 16 special election.

Find this story on thebrunswicknews.com to read the full project list.

Commissioner Cap Fendig, one of the ordinance’s proponents, said he saw it as a short-term solution for restaurants during the COVID-19 pandemic.

“I’d have a little heartburn if it was going to have to include package stores, but I think we need to do everything we can to help our restaurant business,” said Commissioner Bill Brunson.

The state passed a law in 2020 authorizing local governments to pass their own alcohol delivery ordinances.

It comes with some restrictions, however. Grocery stores and gas stations, along with restaurants, bars and establishments that sell for on-premise consumption, can only deliver beer and wine, according to the Georgia Department of Revenue. Package stores, on the other hand, can deliver beer, wine and distilled spirits.

Alcohol can only be delivered during hours when alcohol sales are allowed by local law, and drivers must be 21 or older, take a training course and submit to a background check. They must also be an employee of an establishment holding an alcohol license or a third-party delivery service that has a contractual agreement with an establishment.

Delivery drivers would also be required to check a customer’s ID, take his or her signature and the name and address of the person to whom it was delivered, Dave Snyder, owner of Halyard’s restaurant on St. Simons Island, told the commission. Snyder advocated for the state law and assisted in developing the driver training course.

Snyder said his request to pass a local ordinance came from a desire to keep customer loyalty through the pandemic and to open another revenue stream for businesses that may be struggling due to COVID-19 health and safety restrictions.

“The alcohol deliveries are taking place whether you approve it or you don’t,” Kicklighter said. “Right now, almost every day to the Federal Law Enforcement Training Center, you’re going to have...different private companies taking vehicle-loads of alcohol out there.”

“We certainly need to find out if that’s the case,” Booker said. “If we’ve got the law enforcement center doing it then everybody will be doing it.”

On the other hand, he wanted to reward businesses to try to do things the right way. Booker, Brunson and Fendig said they were in favor of an ordinance allowing restaurants alone to deliver beer and wine.

Commissioner David O’Quinn said he was worried that making alcohol delivery legal would normalize the activity and encourage more people to do so illegally.

At-large Commissioner Walter Rafolski said he feared the commission might run into some opposition by excluding package stores, gas stations and grocery stores.

The commission asked Mumford to bring a draft ordinance to a future meeting for further discussion.

Commissioners also heard updates on several ongoing SPLOST 2016 projects. Construction on a roundabout at the intersection of Kings Way and Frederica Road is slated to wrap up in mid-May and an extension of Dungeness Drive to Southport Parkway may be altered due to an inability to negotiate right-of-way agreements with property owners in the area.