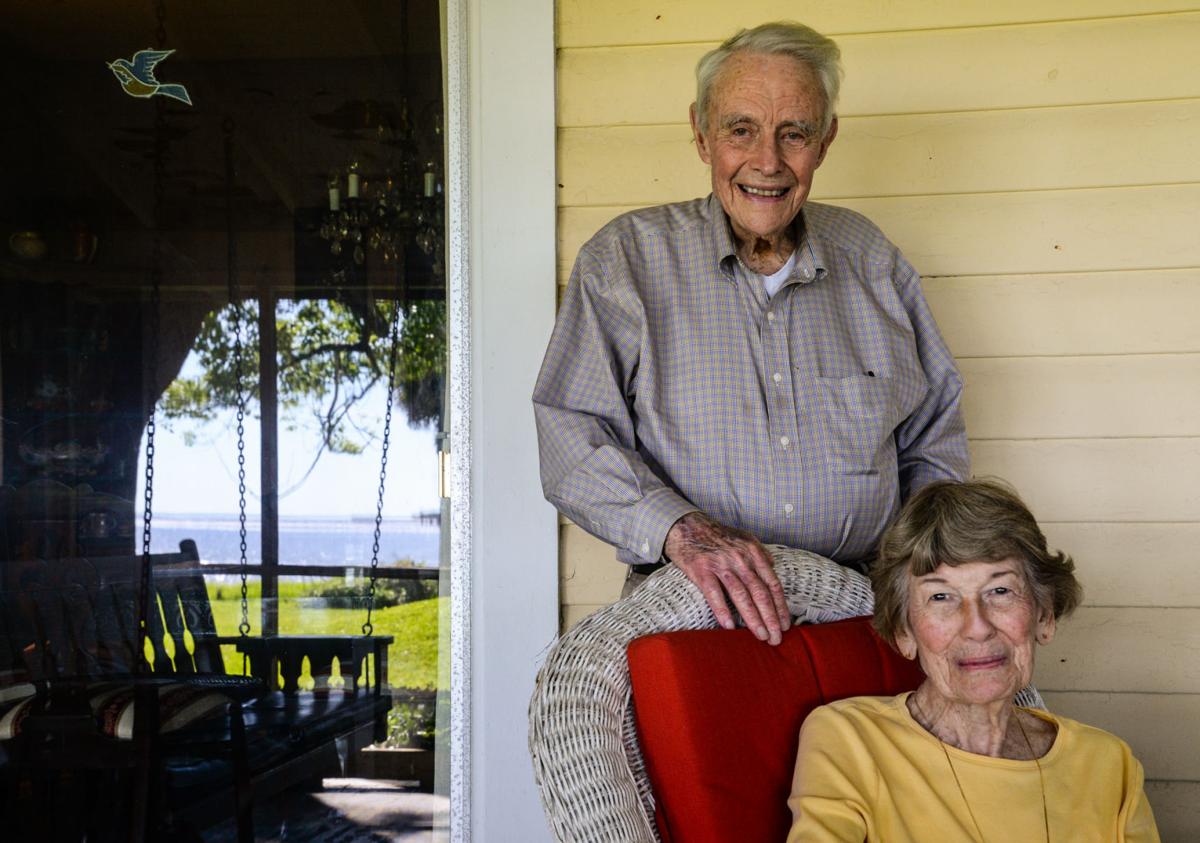 Albert and Joyce Shelander are shown on their porch with St. Simons Sound reflected in a window of their 111-year-old house. 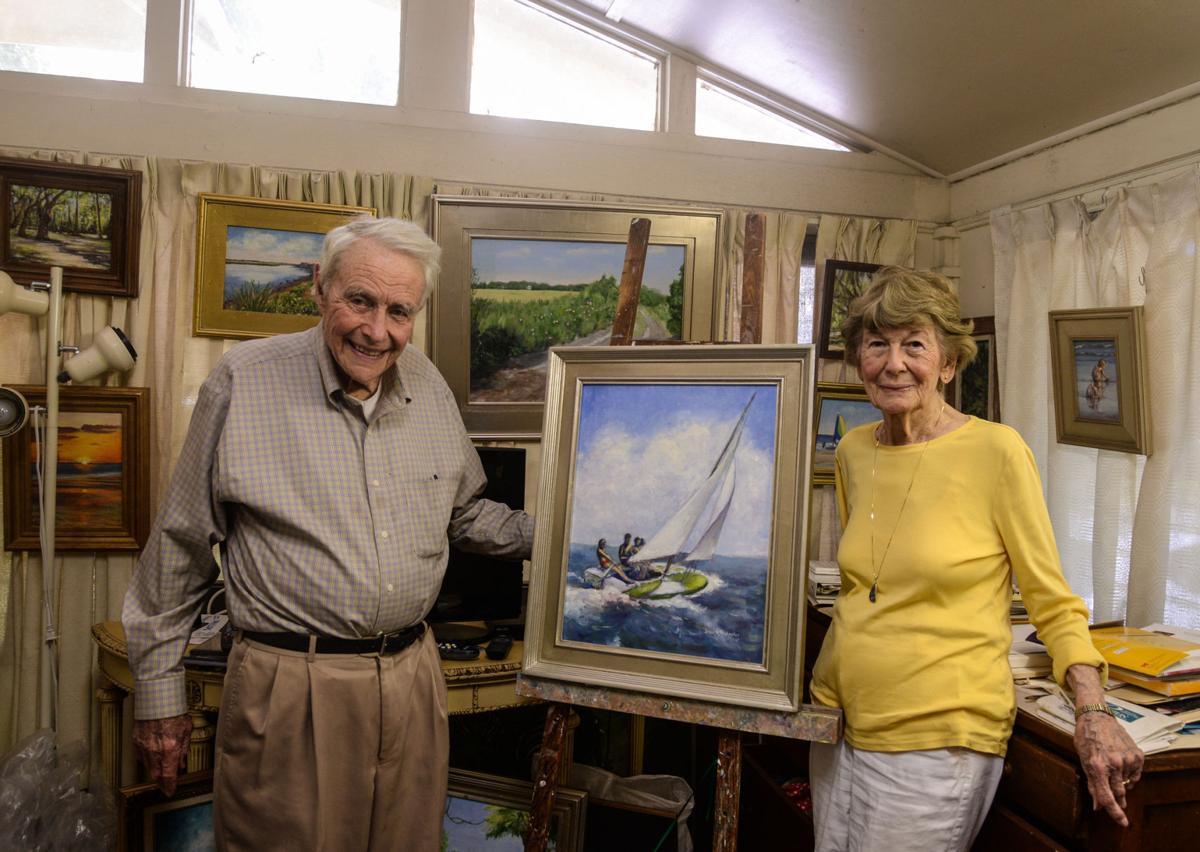 Albert and Joyce Shelander in her artist’s studio with a painting of his sailboat between them.

Albert and Joyce Shelander are shown on their porch with St. Simons Sound reflected in a window of their 111-year-old house.

Albert and Joyce Shelander in her artist’s studio with a painting of his sailboat between them.

In the early days of the Great Depression, Joyce Davis sat beside Albert Fendig Shelander in first grade in primary school in Brunswick.

Through the years, they sat near each other in middle school and high school classes, all on what is now the Glynn Academy campus. In their senior year, trigonometry teacher Buelah Lott put them at the same table with Otis Hendricks and Bobbie Cogdell.

Under that seating arrangement Miss Lott may have figured that perhaps the two boys would pass under the girl’s tutelage.

“He was my first math student,’’ the former Joyce Davis said.

Upon graduation, Albert went to Emory where he captained the golf team and her mother sent her to Coker College in Hartsville to get her away from a suitor. That didn’t work, and she married Flint Nichols. Meanwhile Albert married Marjorie Davis to whom she was not related.

They had both been married more than 50 years when their spouses passed away. Then their paths crossed again at a reunion, Glynn Academy class of ‘44.

As people do, they got to talking and that led to marriage, and they’ve been at the same table again for the past 18 years.

They’re both 95 — she’s two months older — living in the house his grandfather Albert Fendig Sr. built overlooking St. Simons Sound. For 111 years, the house has offered a splendid view of the sound and for the past two the Golden Ray. At night they can see the lights of the VB 10,000 shining and those on various crane barges. By day, they see the enormous auto carriers that manage what the Golden Ray could not on Sept. 8, 2019. They make it past the Shelander’s house and safely out to sea.

Some time after midnight in the darkness of that fateful Sunday morning, an odd racket awoke Joyce Shelander.

“I heard this clicking noise. It turned out it was 3 o’clock in the morning. It was a helicopter going around,’’ she said.

Looking out, she saw a lot of boats with lights on the water and awoke Albert to see if he could figure out what was happening. They had grown accustomed to seeing all the boats massed in the dark for the start of the kingfish tournament, and Albert figured that’s what it was again, a bunch of fishermen with a helicopter overhead.

They went back to bed, and, as she said, “We got up in real daylight,’’ and there was a ship they came to know as the Golden Ray halfway between their house and the Jekyll Island beach.

Albert has spent some time on ships. He had an alternate appointment to the Naval Academy out of high school, and was sent to the academy prep school to get him ready, but someone got in front of him and got his place at the academy. He was assigned almost immediately to a destroyer escort in the Pacific. The Navy was the right place for him. His father, A.N. Shelander, was a naval architect, and his dad drew up plans for a sailboat. They built it together, though Albert said he was never any good with tools. He could sail, however, and has a lot of old black-and-white pictures of himself sailing his boat.

There is a color image of him in the boat, a painting by Joyce that shows a young woman steering.

“That’s someone else at the tiller,’’ she said of the young woman in the swim suit.

But about that house. It has a screened porch across the front that would have appeared in the 10 Commandments had it been built before Moses climbed Mt. Sinai. If God had commanded “Thou shalt not covet thy neighbor’s porch,’’ it would be a hard commandment to keep.

It is a good place to take in the air and a glass of red wine as the sun sets. It has no view of the sunrise, but sunsets are superior anyway and are especially beautiful, Joyce says, in the winter when it starts down around 5 p.m. But as the sign hanging between windows says, “It’s always 5 o’clock on this porch.”

The porch formerly was on two sides of the house. The Florence Street side is now enclosed, and uses half for the home office for Shelander & Associates Real Estate, a company he founded in 1952.

On the other half of the enclosed porch, light streams in through windows into Joyce’s studio where her brushes sit bristles up, cleaned and ready and where her landscapes and portraits hang.

They have more in common than their ages. They share an optimism and cheerful nature that is rare in the 21st Century when people wallow simultaneously in plenty and misery.

He needs a cane to get around the old house, and she pushes a wheeled walker in front of her.

When he says the past 18 years have been fun, she agrees. He also said it hasn’t all been rosy and she agrees with that, too.

He’s had his business triumphs and reversals, but not in equal measure.

He told The News in 2002, after the death of his first wife, his battle with prostate cancer and the death of a sister-in-law that it had still been a wonderful year.

“Every time the good Lord closes a door, he opens another,’’ he said then.

Sitting on his porch on perhaps one of the finest days in months, he said we have a choice.

We can see the glass half full or half empty. He chooses to see it as half full.

Sometimes, though, their cups runneth over.